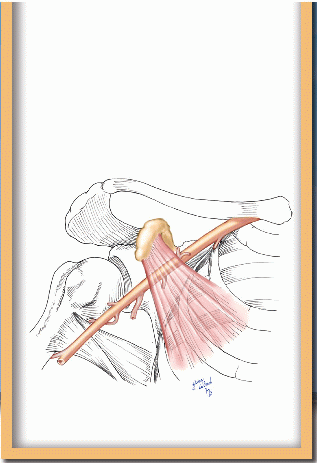 Anatomy of the Axillary Artery
When the arm is in its relaxed, adducted position, the axillary artery is enfolded on all sides by muscles of the chest wall, pectoral girdle, and proximal brachium. Surface landmarks help locate the position of the vessel in relation to the underlying musculoskeletal structures when the arm is at rest (Fig. 5-1). The recurved clavicle defines the upper frame of the axilla. The pectoral muscle mass follows the tapering contour of the upper chest wall beneath the clavicle medially. Laterally, the humeral head with its overlying deltoid and subscapular muscles forms a prominent bulge. The most medial component of this bulge is created by the coracoid process of the scapula pushing the medial part of the deltoid anteriorly. It is not generally appreciated that the corticoid is so clearly visible on surface inspection and requires no esoteric palpation to locate. The cephalic vein lies in the deltopectoral groove and may be visible in a thin or muscular individual. A depression is formed beneath the clavicle between the coracoid prominence of the shoulder and the lateral clavicular origin of the pectoralis major muscle. The axillary artery is most superficial within this depression and can be easily palpated. To follow the courses of the remainder of the vessel, it is necessary to unfold the muscular envelope and view the artery in its anatomic context.

The Muscular Boundaries
The axillary artery is anatomically defined by the lateral margin of the first rib proximally and the lateral edge of the teres major muscle distally. Along this span, the artery lies within a cleft formed by muscles originating on the scapula (Fig. 5-2). The broad subscapularis, converging toward the head of the humerus, forms the majority of the posterior bed on which the vessel lies. The lowest segment of the artery crosses the teres major and latissimus dorsi insertions.
The medial wall of the cleft consists of the serratus anterior, wrapping around the upper ribs from its origin on the medial border of the deep scapular surface. The coracoid process arches over the axillary neurovascular bundle and gives origin to muscles that lie anterior to the vessels. One of these, the pectoralis minor muscle, is used as a landmark to divide the axillary artery into three parts which are medial to, behind, and lateral to the muscle. The coracobrachialis, a small muscle analogous to the adductors of the thigh, and the short head of the biceps brachii also originate from the tip of the coracoid process. The neurovascular bundle parallels the course of these muscles. The pectoralis major adds the final anterior blanket of muscle over the axillary space.


Branches of the Axillary Artery
The first segment of the axillary artery has one branch, the second has two, and the third segment has three branches (Fig. 5-3). Immediately after passing over the outer rim of the first rib, the axillary artery gives origin to the small supreme thoracic artery.
Behind the medial margin of the pectoralis minor muscle, the second part of the axillary artery gives rise to the thoracoacromial artery from its anterior surface and the lateral thoracic artery from its inferior surface. After penetrating the clavipectoral fascia, the thoracoacromial artery divides into lateral acromial and deltoid branches, and medial clavicular and pectoral branches. The pectoral branch, with its accompanying vein and lateral pectoral nerve, forms the major neurovascular pedicle to the pectoralis major muscle. The lateral thoracic artery descends from the second part of the axillary artery to the lateral chest wall, pectoralis major muscle, and breast.


The largest branch of the axillary artery is the subscapular artery, which arises from the third part lateral to the pectoralis minor muscle. It is surrounded by the fat and lymph nodes of the central axilla. It divides into the circumflex scapular artery and thoracodorsal artery. The latter is joined by the thoracodorsal nerve to form the principal neurovascular pedicle of the latissimus dorsi muscle. The remaining two branches of the distal axillary artery are the medial and lateral humeral circumflex arteries. The medial branch runs between the subscapularis tendon and deltoid muscle. The lateral branch, accompanied by the axillary nerve, passes between the teres major, teres minor, long head of the triceps, and the humerus to reach the posterior aspect of the shoulder.

The Nerves of the Axilla
The divisions and cords of the brachial plexus interchange fibers in the proximal axilla and assume the final configuration of nerves to the arm around the third part of the axillary artery (Fig. 5-4). Several important branches arise from the roots, trunks, divisions, and cords of the brachial plexus and traverse the axillary space.
The nerve of the axilla with the most proximal origin is the long thoracic arising from the ventral primary rami of cervical nerves three, four, and five. The long thoracic nerve emerges through the body of the middle scalene muscle dorsal to the brachial plexus and lies on the serratus anterior muscle, which it innervates. It lies relatively far posterior in the serratus/subscapularis cleft described above.
The lateral and medial pectoral nerves are named for the cords of the brachial plexus from which they arise. Anatomically, they occupy relative positions opposite to what their names imply and have been described in clinical literature by positional designations.1,2 The following discussion uses the descriptors based on origin. The pectoral nerves are important because they innervate the large pectoralis muscle. The lateral pectoral nerve usually divides into two to four branches and supplies the cephalad portion of the pectoralis major muscle. The branches that join the pectoral branch of the thoracoacromial artery form a neurovascular pedicle on which the pectoralis muscle can be transplanted. The medial pectoral nerve passes between the axillary artery and vein, penetrates and supplies the pectoralis minor muscle, and continues through that muscle as one or more branches to supply the caudal part of the pectoralis major muscle.


The musculocutaneous nerve arises from the lateral cord and supplies the coracobrachialis, biceps brachii, and the medial part of the brachialis muscles. The medial antebrachial and brachial cutaneous nerves arise from the medial cord in the midaxilla. The latter is usually joined by the intercostobrachial nerve spanning the distal axillary space from the second intercostal nerve. The thoracodorsal nerve arises from the posterior cord and joins the thoracodorsal artery to the latissimus dorsi muscle. The subscapular nerves to the subscapularis and teres major muscles also arise from the posterior cord. The last branch of the posterior cord is the axillary nerve to the teres minor and deltoid muscles and posterior shoulder.
The three major nerves to the upper extremity, the median, ulnar, and radial, surround the distal
axillary artery. The median and ulnar nerves accompany the brachial artery in the arm. The radial nerve deviates from the neurovascular bundle at the distal border of the latissimus tendon and passes posteriorly around the humerus with the deep brachial artery.
The Fasciae of the Axilla
The central compartment of the axilla is occupied by the neurovascular bundle and loose, fatty, areolar tissue containing lymphatics and lymph nodes (Fig. 5-5). The neurovascular bundle is surrounded by a fascial wrapping called the axillary sheath. Vascular and nerve branches exit the sheath and traverse the fatty axillary contents to reach their destinations. The bulk of the fatty axillary content is anterior, caudal, and posterior to the sheath. There is a clear plane between the sheath and fat along the anterior surface of the axillary vein. This plane is used to identify the neurovascular branches when beginning an axillary dissection. A second clear plane is found between the fat and the deep fascia over the serratus anterior muscle. The intercostobrachial nerve penetrates the axillary fat in the distal axilla and often must be divided to obtain a clean axillary dissection.

Exposure of the Axillary Artery
The axillary artery is an ideal donor artery in extraanatomic bypasses to the opposite arm or to the lower extremities. It is a direct extension of major aortic arch branches and is usually free of flow-limiting arterial stenoses. Its location outside of the thorax and below the clavicle affords easy accessibility and allows construction of superficial bypasses. The physiologic advantage of these bypasses has been well-documented in elderly, poor-risk patients who would not tolerate more direct intraabdominal or intrathoracic bypasses.3,4,5 Superficial bypasses are also indicated for lower extremity revascularization in cases of aortic sepsis.6
The superficial location of the axillary artery and its proximity to the brachial plexus also carry disadvantages, as the neurovascular bundle is prone to injury. The long-term consequences are determined by the degree of neurologic trauma.7,8,9 Longterm functional deficits are rare after isolated axillary artery injuries, but patients with combined neurovascular trauma may experience severe disability and even require late arm amputation. In addition to injuries resulting from accidents or violence, the axillary artery is subject to iatrogenic trauma from invasive diagnostic tests, such as arteriograms. The tough axillary sheath prevents exsanguination from these injuries but permits rapid compression of its contents as blood accumulates. Symptoms of brachial plexus compression are reversible only with rapid evacuation of blood within the sheath.

Tags: Anatomic Exposures in Vascular Surgery
May 22, 2016 | Posted by drzezo in ANATOMY | Comments Off on Axillary Artery
Premium Wordpress Themes by UFO Themes
WordPress theme by UFO themes
%d bloggers like this: