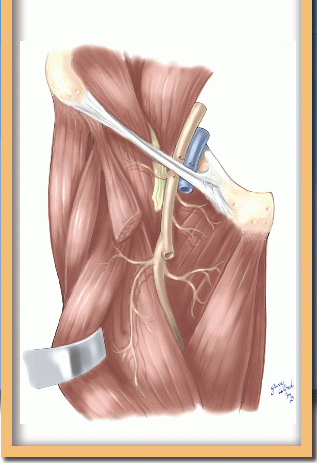 The proximal femoral artery and vein are wrapped in a fibrous covering called the femoral sheath. This sheath is made up of several components (Fig. 15-2). The lateral part of the sheath adjacent to the femoral nerve is the continuation of the iliac fascia covering the iliopsoas muscle. The posterior portion of the sheath is the fascia covering the pectineus muscle. Anteriorly and medially, the sheath is a tubular extension of the transversalis endoabdominal fascia lining the anterior abdominal wall. Within the sheath, there is a well-developed septum separating the artery from the vein. The sheath fits snugly around the vessels except on the medial side, where a narrow channel (femoral canal)
accommodates the passage of lymphatics. The pelvic end of this channel is covered with weak fascia and is the site through which a femoral hernia passes (Fig. 15-3). The femoral sheath becomes continuous with the adventitia of the vessels at the origin of the deep femoral artery and vein. The sheath is perforated by small arterial branches and the great saphenous vein.


Wrapped in their sheath, the femoral vessels lie cradled in a bed of muscles (Fig. 15-4). The course of the vessels in the proximal third of the thigh lies within another triangular space defined by muscular boundaries (Scarpa’s triangle). The lateral margin of the triangle is formed by the sartorius muscle, the medial margin by the adductor longus muscle, and the cephalad base of the
triangle by the inguinal ligament. Between these boundaries, the triangle appears as a depressed plane when the thigh is flexed in external rotation (Fig. 15-5).

The fascia lata forms an anterior roof over the femoral triangle and attaches to the inguinal ligament. It is breached by an oval opening (fossa ovalis) through which lymphatics and the great saphenous
vein pass (Fig. 15-6). The fossa ovalis is covered by the poorly defined cribriform fascia, which supports one of two groups of superficial subinguinal lymph nodes (Fig. 15-7). The more cephalad group of nodes parallels the inguinal ligament. These nodes lie in the path of an anterior groin incision onto the femoral artery, and the rich plexus of lymphatic channels surrounding these nodes increases the
risk of lymphocele after incisions in this area. Both groups of nodes drain to the deep subinguinal nodes found in the fatty areolar tissue within the femoral triangle, and from there lymph drains through the femoral canal to the external iliac chain.


Before peeling back the fascia lata to examine the deeper structures of the femoral triangle, we should briefly look at the relationships of the external iliac artery just inside the abdominal wall to anticipate the major route through which bypass grafts to the femoral artery must pass.


Just inside the abdominal wall, the external iliac artery gives off two small branches that run in the plane between the peritoneum and the transversalis fascia (Fig. 15-8). The inferior epigastric artery runs
toward the umbilicus, penetrating the transversalis fascia below the arcuate line of the posterior rectus sheath to reach the lower third of the rectus abdominis muscle. Immediately after its origin, the inferior epigastric sends a small branch with the internal oblique fibers that form the cremasteric covering of the spermatic cord in the male. The second small branch of the terminal external iliac artery is the deep circumflex iliac artery, which runs behind the lateral portion of the inguinal ligament. Any of these small arteries and especially their accompanying veins may be injured in creating the tunnel for the bypass graft. The resultant bleeding is annoying and increases the risk of infection. In addition, approximately 20% of patients have an obturator artery that arises from the inferior epigastric rather than from the internal iliac artery (Fig. 15-9 and see Fig. 19-21). This aberrant vessel descends across the pelvic end of the femoral canal and across the pectinate line of the pubis to reach the obturator canal. There is a potential for injury of this vessel during graft tunneling, a lesson learned from repair of femoral and inguinal hernias.

The floor of the femoral triangle beneath the femoral vessels consists of the pectineus muscle medially and the iliopsoas muscle arching over the anterior aspect of the hip joint laterally (see Fig. 15-1). The proximity of the underlying hip joint is demonstrated by the occasional joint infection after femoral arteriography when sterile technique is broken. Deep to the pectineus muscle lies the obturator foramen, covered by a dense membrane in all but its cephalad portion (Fig. 15-10).
The attachments of the adductor muscles around the bony margins of the obturator foramen form the rim of a cone, with the obturator membrane as its base. Within this cone, the obturator externus muscle has its broad origin from the lower part of the membrane, and the obturator nerve and vessels pass from the pelvis to the thigh through the more cephalad obturator canal. The obturator membrane provides an alternate route for bypass grafts to the femoral artery (Fig. 15-11).


The common femoral artery crosses the pectineus muscle diagonally and divides into the superficial and deep femoral arteries. The deep femoral (profunda femoris) artery provides the majority of blood flow to the thigh muscles, supplemented by the obturator artery and descending branches of the superior and inferior gluteal arteries (Fig. 15-12). The superficial femoral artery reaches the inverted apex of the femoral triangle and then traverses the thigh in the adductor canal (Hunter’s canal) between the quadriceps and adductor muscles, giving off only minor muscular branches (see Fig. 15-4).
Near the adductor hiatus, the superficial femoral artery gives off the highest genicular artery that may assume importance as a collateral channel in femoral occlusive disease (see Chapter 17).

The continuation of the deep femoral artery turns posteromedially toward the femur and enters the plane posterior to the adductor longus where it closely parallels the femoral shaft (Fig. 15-15A, B). It supplies the bodies of the adductor muscles and sends four perforating vessels through openings in the adductor brevis and magnus muscles. The first two branches usually perforate both muscles, whereas the lower branches penetrate only the tendinous attachment
of the adductor magnus muscle along the medial lip of the linea aspera of the femur. The last perforator is the termination of the deep femoral artery. The perforators anastomose with each other along the posterior side of the adductor magnus muscle and provide blood to the hamstring muscles of the flexor compartment. The second perforator usually provides a major nutrient vessel to the femur, and the distal perforators anastomose with branches of the popliteal artery.


Only gold members can continue reading. Log In or Register to continue

Tags: Anatomic Exposures in Vascular Surgery
May 22, 2016 | Posted by drzezo in ANATOMY | Comments Off on Common Femoral Artery
Premium Wordpress Themes by UFO Themes
WordPress theme by UFO themes
%d bloggers like this: