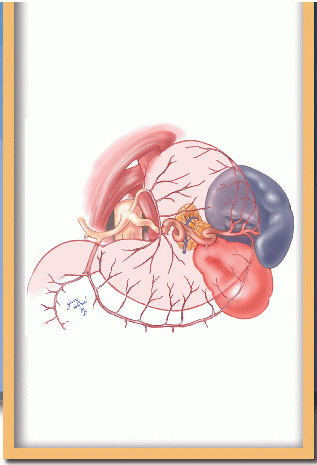 Surgical Anatomy of the Mesenteric Vessels
Three large, unpaired midline vessels supply the majority of organs enclosed by the outer envelope of parietal peritoneum. Two of these, the celiac and superior mesenteric arteries, arise within centimeters of each other at the level of the first lumbar vertebra (Fig. 10-1). The third, the inferior mesenteric artery, arises from the anterior wall of the aorta at the level of the third lumbar vertebra.

Celiac Trunk
The celiac trunk is closely flanked by the median arcuate ligament of the aortic hiatus above and the superior border of the pancreas below (Fig. 10-2). Viewed from an anterior perspective, the celiac trunk lies beneath the overlapping edges of the liver and stomach. On separating these two organs, the connecting gastrohepatic ligament, which forms the anterior wall of the omental bursa, is seen overlying the celiac trunk. Inside the omental bursa lies a final covering membrane, the posterior parietal peritoneum. Beneath the peritoneum, the celiac trunk is surrounded by lymphatic and nerve plexuses.


The celiac trunk is almost perpendicular to the aorta. The three branches of the celiac trunk most often form a trifurcation (see variations, Chapter 19). One significant vein, the left gastric (or coronary) vein, crosses over the celiac trunk in its course from the lesser curve of the stomach to the portal vein.

The hepatic artery passes to the right beneath the posterior peritoneum of the omental bursa, enters the hepatoduodenal ligament just cephalad to the pylorus, and ascends to the hilum of the liver on the left side of the common bile duct. The terminal branching of the hepatic artery is highly variable, and alternate origins of hepatic artery branches are not uncommon.
The splenic artery descends beneath the peritoneum to undulate along the cephalad border of the pancreas where it gives off a significant dorsal pancreatic branch and a few smaller branches. After dividing into four to five branches near the hilum of the spleen, it gives off short gastric branches and the left gastroepiploic artery that run in the gastrosplenic ligament and the gastrocolic ligament, respectively (Fig. 10-3).


The continuation of the superior mesenteric artery gives rise to two named branches and numerous vessels supplying the small bowel. Shortly after crossing the duodenum, the superior mesenteric gives off the right colic artery, which lies within the fused mesentery of the right colon. The ileocolic branch arises in common with or distal to the right colic and descends toward the cecum. The root of the small bowel mesentery passes from midline to the right lower quadrant, allowing mobilization of
this mesentery to the right for exposure of the aorta (Fig. 10-5).
Inferior Mesenteric Artery
The inferior mesenteric artery emerges near the lower border of the third portion of the duodenum where the latter crosses the aorta (Fig. 10-1). It is closely applied to the aorta as it passes to the left into the fused mesentery of the left colon. Within 5 cm of its origin, the artery first gives off a left colic branch and then several sigmoidal branches into the mobile sigmoid mesentery and finally terminates as the superior rectal branch. The latter crosses over the left iliac vessels to reach the posterior wall of the upper rectum (Fig. 10-1). In some cases of superior mesenteric occlusive disease, mesenteric channels between the left colic and middle colic arteries hypertrophy to form a meandering mesenteric artery (described by Riolan, see below),
which supplements the deficient superior mesenteric system.

Exposure of the Mesenteric Arteries
The collateral network between the three main arteries of the mesenteric circulation provides a margin of safety for bowel viability when flow to
one or more of the mesenteric arteries is slowly reduced by atherosclerotic occlusive disease. In general, flow in at least two of the three arteries must be reduced to produce symptoms of chronic intestinal ischemia.1 There appear to be many exceptions to this rule, however. Occlusion of two or even all three of the vessels has been observed in asymptomatic individuals.2,3 Conversely, the compression of a single mesenteric artery (the celiac axis) by the median arcuate ligament or by abnormal celiac ganglion fibers is believed by many authors to be responsible for symptoms of mesenteric ischemia in the so-called celiac axis compression syndrome.4,5 This syndrome remains controversial because several authors have shown that release of celiac axis compression may not permanently relieve symptoms in some patients.6,7 Furthermore, up to 5% of healthy, a-symptomatic individuals have evidence of celiac compression on CT.8

Endovascular techniques are a useful alternative in some patients with chronic mesenteric ischemia, but surgical treatment is still considered the gold standard: surgical revascularization has been associated with a lower incidence of recurrent symptoms compared with percutaneous angioplasty and stenting.12,13 Open surgical treatment with embolectomy or bypass is also indicated in acute mesenteric ischemia. Although direct infusion of thrombolytic agents through a percutaneous catheter can restore superior mesenteric artery flow,14 operative intervention for acute mesenteric ischemia affords the opportunity to inspect the intestine for viability.
Superior mesenteric artery embolectomy is a simple and durable operation for the correction of acute embolic occlusions.9 The best method for restoring mesenteric flow in patients with thrombotic occlusion is controversial and dependent on the underlying disorder. Excellent long-term results have been reported for antegrade bypasses,15 retrograde bypasses16

Tags: Anatomic Exposures in Vascular Surgery
May 22, 2016 | Posted by drzezo in ANATOMY | Comments Off on Celiac and Mesenteric Arteries
Premium Wordpress Themes by UFO Themes
WordPress theme by UFO themes
%d bloggers like this: