This chapter focuses on drugs used to treat some of the more common disorders affecting the upper respiratory system, particularly allergies and the congestion associated with certain respiratory disorders. The drugs used to treat the discomfort associated with an upper respiratory disorder include antihistamines, decongestants, antitussives, and expectorants. Many of these drugs are available as nonprescription (over-the-counter [OTC]) drugs, whereas others are available only by prescription.

The buildup of secretions in the lower respiratory system is treated with mucolytics. These agents break down the thickness of the secretions for easier removal.

Histamine is produced in response to an allergic reaction or tissue injury. The release of histamine produces an inflammatory response. Dilation of small arterioles results in localized redness. An increase in the permeability of small blood vessels promotes an escape of fluid from these blood vessels into the surrounding tissues, which produces localized swelling. This reaction is illustrated in Figure 31.1. Histamine is also released from mast cells in allergic reactions or hypersensitivity reactions, such as anaphylactic shock. 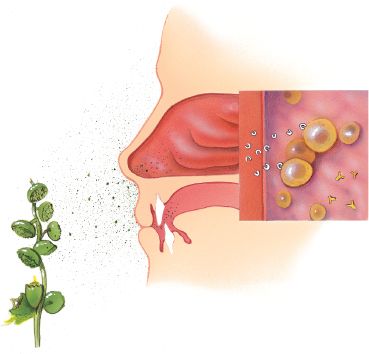 Janna Wong, a 16-year-old gymnast, is experiencing nasal congestion. She has been prescribed a combination antihistamine and nasal decongestant. A number of antihistamines have anticholinergic effects. Think about the teaching points you will want to cover with Janna.

Antihistamines (or H1 receptor antagonists) block most, but not all, of the effects of histamine. They do this by competing at the histamine receptor sites throughout the body, thereby preventing histamine from entering these receptor sites and producing an effect on body tissues. First-generation antihistamines bind nonselectively to central and peripheral H1 receptors and may result in central nervous system (CNS) stimulation or depression. CNS depression usually occurs with higher doses and explains why some of these agents are used for sedation. Other first-generation drugs may have additional effects, such as antipruritic (anti-itching) or antiemetic (antinausea) effects. Second-generation antihistamines are selective for peripheral H1 receptors and, as a group, are less sedating.

Desloratadine, loratadine, and fexofenadine minimally penetrate the blood–brain barrier, which means that little of the drug is distributed in the CNS so that fewer of the sedating effects are felt. Topical corticosteroid nasal sprays, such as fluticasone (Flonase) or triamcinolone (Nasacort), are also used to reduce the inflammation of nasal allergy symptoms; these are listed in Table 31.1.

The general uses of the antihistamines include the following:

•  Relief of the symptoms of seasonal and perennial allergies

•  Relief of allergic reactions to drugs, blood, or plasma

•  Relief of coughs caused by colds or allergies

•  Relief of nausea and vomiting 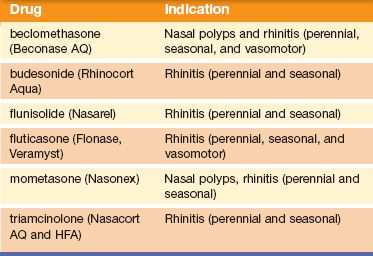 Each antihistamine may be used for one or more of these reasons. The more specific uses of the various antihistamine preparations are given in the Summary Drug Table: Upper Respiratory System Drugs.

Anticholinergic actions of antihistamines affect the respiratory system and include the following:

•  Dryness of the mouth, nose, and throat

Second-generation preparations (e.g., loratadine) cause less drowsiness and fewer anticholinergic effects than some of the other antihistamines. Although these drugs are sometimes used to treat allergies, a drug allergy can occur with the use of an antihistamine. Symptoms that may indicate an allergy to these drugs include skin rash or urticaria.

The first-generation antihistamine drugs are contraindicated in patients with known hypersensitivity to the drugs, newborns, premature infants, and nursing mothers. These drugs are also contraindicated in individuals taking monoamine oxidase inhibitor (MAOI) antidepressants or who have one of the following conditions: angle-closure glaucoma, peptic ulcer, symptomatic prostatic hypertrophy, and bladder neck obstruction.

During the winter and spring seasons beware of a potential name mix-up between the antihistamine ZyRTEC and the antipsychotic ZyPREXA. Tracking reports note that these two drugs are easily misread due to similarity of brand names (ISMP, 2007).

The following interactions may occur when an antihistamine is administered with another agent: 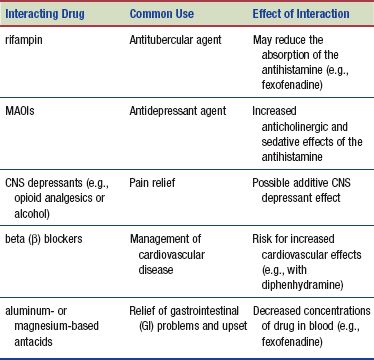 A decongestant is a drug that works directly on blood vessels to reduce swelling of the nasal passages, which, in turn, opens clogged nasal passages and enhances drainage of the sinuses. These drugs are used for the temporary relief of nasal congestion caused by the common cold, hay fever, sinusitis, and other respiratory allergies.

Decongestants are used to treat the congestion associated with the following conditions:

When used topically in prescribed doses, there are usually minimal systemic effects in most individuals. On occasion, nasal burning, stinging, and dryness may be seen. When the topical form is used frequently or if the liquid is swallowed, the same adverse reactions seen with the oral decongestants may occur. Use of oral decongestants may result in the following adverse reactions:

•  Tachycardia and other cardiac arrhythmias

Decongestants are used cautiously in patients with the following:

Safe use of the decongestants during pregnancy (pregnancy category C) and lactation has not been established. Pregnant women should consult with their primary health care provider before using these drugs.

The following interactions may occur when a decongestant is administered with another agent:

Coughing is the forceful expulsion of air from the lungs. A cough may be productive or nonproductive. A nonproductive cough is a dry, hacking one that produces no secretions. An antitussive drug is used to relieve coughing.

With a productive cough, secretions are made in the respiratory tract. An expectorant is a drug that thins respiratory secretions to remove them more easily from the respiratory system. Many cough and cold preparations are a combination such as an antihistamine, antitussive, and/or expectorant, and sold OTC as a nonprescription cough medicine. Other antitussives, either alone or in combination with other drugs, are available by prescription only. A mucolytic is a drug that breaks down thick, tenacious mucus in the lower portions of the lungs for better elimination from the respiratory system.

Most antitussives depress the cough center located in the medulla and are called centrally acting drugs. Codeine and dextromethorphan are examples of centrally acting antitussives. Benzonatate (Tessalon) is the exception; it works peripherally by anesthetizing stretch receptors in the respiratory passages, thereby decreasing cough.

Expectorants increase the production of respiratory secretions, which in turn appears to decrease the viscosity of the mucus. This helps to raise secretions from the respiratory passages. An example of an expectorant is guaifenesin. Drugs with mucolytic activity reduce the viscosity (thickness) of respiratory secretions by direct action on the mucus. An example of a mucolytic drug is acetylcysteine. One other mucolytic drug is on the market, dornase alfa (Pulmozyme). This agent is used for the treatment of cystic fibrosis.

Antitussives are used to relieve a nonproductive cough. Expectorants are used to help bring up respiratory secretions. The mucolytic acetylcysteine is used to treat the following:

•  Pulmonary complications associated with surgery and during anesthesia

•  Atelectasis due to mucous obstruction

This drug is also used for diagnostic bronchial studies, such as bronchograms and bronchial wedge catheterizations. It is primarily given by nebulizer but also may be directly instilled into a tracheostomy to liquefy (thin) secretions.

When used as directed, nonprescription cough medicines produce few adverse reactions. However, those that are combined with an antihistamine may cause:

Antitussives are given with caution to patients with a persistent or chronic cough or a cough accompanied by excessive secretions, a high fever, rash, persistent headache, and nausea or vomiting.

Other CNS depressants and alcohol may cause additive depressant effects when administered with antitussives containing codeine. When dextromethorphan is administered with the MAOI antidepressants (see Chapter 22), patients may experience hypotension, fever, nausea, jerking motions to the leg, and coma. No significant interactions have been reported when the expectorants are used as directed. The exception is iodine products. If used concurrently with iodine products, lithium and other antithyroid drugs may potentiate the hypothyroid effects of these drugs. When potassium-containing medications and potassium-sparing diuretics are administered with iodine products, the patient may experience hypokalemia, cardiac arrhythmias, or cardiac arrest. Thyroid function test results may also be altered by iodine.

Eucalyptus is used as a decongestant and expectorant and is found as a component in OTC products used for the treatment of sinusitis and pharyngitis. The plant is grown throughout the world and the leaves and oil are used to treat various respiratory conditions, such as asthma and chronic bronchitis. The lozenges are useful to soothe sore throats and as cough drops. Eucalyptus can also be used as a vapor bath for asthma or other bronchial conditions. Scientific evidence is inconclusive regarding the respiratory benefit of the herb, yet people feel a sense of well-being from its use. The herb is available in many forms, including an essential oil, a fluid extract, and an aqueous solution in alcohol, as well as a component of various OTC products. Eucalyptus should not be used during pregnancy and lactation and in children younger than 2 years of age. Eucalyptus may be used topically on children and adults in combination with menthol and camphor. Individuals with hypersensitivity to eucalyptus should avoid its use (DerMarderosian, 2003).