Upper Abdominal Aorta, Including the Visceral and Supraceliac Segments 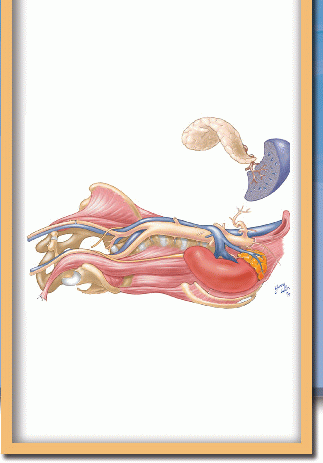 Upper Abdominal Aorta, Including the Visceral and Supraceliac Segments

Surgical Anatomy of the Abdominal Aorta
In its short span, the abdominal aorta is the center of some of the most complex anatomic relationships in the body. The unique problems of access to the various segments are dealt with separately in the following chapters. Before focusing on regional details, it is useful to review the disposition of the abdominal aorta in the context of the whole abdomen.
Overview
The aorta occupies a central position in the abdominal cavity. In the upper abdomen, the major organs are arranged in a semicircle around the great vessels and fill the domes of the diaphragm beneath the rib cage (Fig. 9-1). The vessels lie within the continuations of anterior and posterior renal fascia (Gerota’s fascia) across the midline.1 The viscera on the left
side can be mobilized in the plane between the pancreas and anterior renal fascia. To mobilize the kidney along with the other viscera, the anterior renal fascia must be opened.
The profile of the midabdomen is flattened and relatively shallow from front to back (Fig. 9-2). The prominent vertebral bodies of the lumbar spine further impinge on the anterior-posterior diameter. Thus, the abdominal aorta, which caps the ridge of the lumbar spine, lies remarkably close to the anterior abdominal wall in thin individuals. From its central location overlying the first to fourth lumbar vertebrae, the aorta sends branches to the whole abdomen.


The abdomen consists of bony and muscular walls capped by diaphragms at each end and lined by transversalis fascia. Contained within the abdominal cavity is the envelope of parietal peritoneum surrounding most of the abdominal organs (Fig. 9-3).
The posterior wall of parietal peritoneum is invaginated in a complex pattern by the roots of the small bowel and the transverse and sigmoid colon

mesenteries as well as the broad attachments of the liver, spleen, and ascending and descending colon (Fig. 9-4). The great vessels and the urologic and pancreaticoduodenal complexes lie between the posterior peritoneal envelope and the posterior abdominal wall (Fig. 9-5). The stomach, colon, and small bowel fill the parietal peritoneum and blanket the great vessels (Fig. 9-6).


Diaphragm and the Supraceliac Abdominal Aorta
To understand the relationships and approaches to the proximal abdominal aorta, one must understand the anatomy of the diaphragm. The diaphragm consists of a crown of axial muscle fibers originating from the rim of the inferior thoracic aperture and inserting into a strong, aponeurotic, three-lobe central tendon (Fig. 9-7). The anterior two-thirds of the circumferential origin attach to the free margin of the costal cartilages and lower ribs. These slips of origin interdigitate perpendicularly with the origins of the transversus abdominis muscles. In the deepest angle of the anterior sulcus thus formed, the musculophrenic branches of the internal thoracic arteries course along the costal margin on
each side. These vessels are transected when the costal margin is divided. The internal thoracic arteries penetrate the diaphragm between the sternal and costal slips.


Posteriorly, the diaphragm originates from the lateral and medial lumbocostal arches spanning the quadratus lumborum and psoas muscles, respectively. The final components of the origins are the crura, which originate from the anterior surfaces and anterior longitudinal ligament of the first three lumbar vertebrae on the right and the first two on the left.
The main blood supply on the undersurface of the diaphragm consists of paired inferior phrenic arteries that have a variable origin from the aorta or its first major branches. These vessels have anterior and posterior divisions on each side. The veins follow the arterial pattern and drain into the vena cava.


The esophageal hiatus is muscular and consists primarily of fibers from the right crus. Note the ascending arrangement of aortic, esophageal, and inferior vena cava openings.
The topography of the diaphragm is best appreciated when viewed from above (Fig. 9-8). The rim of the diaphragm reflects the inverted V of the costal margin anteriorly, runs transversely around the posterior flanks, and appears to sprout from the roots of the crura. The domes present a bilobed mammillation depressed centrally at the seat of the heart and indented posteriorly by the vertebral column and aorta. In this view, the application of the crura to several centimeters of terminal thoracic aorta above the aortic hiatus can be appreciated.
The inferior vena caval aperture is the most cephalad and lies at the junction of the middle and
right lobes of the central tendon, directly beneath the right atrium. The esophageal hiatus lies at an intermediate level between the vena caval orifice and the aortic hiatus, slightly to the left of midline. It is surrounded by muscular fibers of the right diaphragmatic crus.
The motor innervation to the diaphragm is via the phrenic nerves, which also carry sensory fibers. Additional sensory fibers from the lower intercostal nerves serve the periphery. The right phrenic nerve sends a branch to the cephalad surface of the diaphragm and then penetrates the right leaf of the central tendon just lateral to the vena caval orifice. It divides into anterior and posterior branches on the undersurface. The left phrenic follows a similar pattern at the apex of the heart on the left.


Viewed from behind, the enfolding of the aorta by the diaphragmatic crura is evident, as is its anterior-posterior proximity to the lower esophagus (Fig. 9-9). The surest way to identify the esophageal hiatus on abdominal exploration is to locate the pulsations of the aorta transmitted through the esophageal walls. The aortic passage posterior to the diaphragm lies between the median arcuate ligament connecting the crura anteriorly and the body of the T12 vertebra posteriorly.
Note the paraaortic structures and keep them in mind when considering the anterior approach to this segment of aorta.
The supraceliac abdominal aorta is only 1 to 2 cm in length (Fig. 9-10). Only the variable inferior phrenic and T12 lumbar vessels arise from this short segment. The origin of the thoracic duct from the cisterna chyli lies to the right of the aorta and passes beneath the right crus.

Exposure of the Upper Abdominal Aorta
For purposes of discussion, the upper abdominal aorta can be anatomically divided into three segments by the large visceral and renal branches that originate in this area. The supraceliac aorta includes the portion between the celiac artery and the mediastinum. The visceral segment spans between the renal arteries and the celiac axis and includes the origin of the superior mesenteric artery. The juxtarenal area is the portion within 1 cm above and below the renal arteries that frequently overlaps with the visceral segment.
Exposure of the supraceliac aorta may be accomplished using transabdominal or retroperitoneal approaches. Because the transabdominal approach provides relatively limited exposure of the aorta above the celiac axis, its use should be restricted to situations in which more extensive exposure of the upper abdominal aorta is not required. The transabdominal approach is ideal for vascular control of the aorta above the celiac artery when control below the level of the renal arteries is technically difficult, such as pararenal aneurysms, inflammatory aneurysms, ruptured aneurysms with disruption of local tissue planes, and aneurysms with hostile infrarenal aortic necks or prior endovascular repair.2,3,4,5 Clamp occlusion of the aorta above the celiac artery has been associated with fewer complications compared with occlusion between the renal and superior mesenteric arteries in these circumstances.6,7 Limited exposure of the supraceliac aorta may also be indicated in the construction of prograde bypasses to the mesenteric and renal arteries.8 The segment of aorta proximal to the celiac artery is often devoid of plaque and may be an ideal site for placement of a partial occlusion clamp during bypass construction.
The retroperitoneal approach allows more extensive exposure of the juxtarenal and visceral aorta. This approach has been used in the elective treatment of aortic diseases of all types and appears to confer important physiologic benefits compared with transperitoneal exposures.9,10 We have found it especially useful to treat juxtarenal aneurysms, inflammatory aneurysms, and embolizing lesions of the visceral aorta (“coral reef” syndrome). However, because access to the right renal and right iliac arteries is limited, it should be avoided in patients with extensive atherosclerosis in these locations.11
Operations that require full exposure of the visceral, supraceliac, and lower thoracic segments of the aorta cannot safely be performed through a
simple abdominal incision.12,13 Such exposure is most commonly gained by simultaneously entering the abdominal and left thoracic cavities, the socalled left thoracoabdominal approach. The unique characteristics of vascular disease in this area and the detrimental physiologic effects of thoracoabdominal incisions have been chronicled elsewhere.14,15,16
The following discussions concern the limited transabdominal exposure of the supraceliac aorta, the more extensive retroperitoneal exposure of the visceral aorta, and the complete thoracoabdominal approach to the lower thoracic and visceral aortic segments. Exposure of the infrarenal aorta is discussed in Chapter 12.

Transabdominal Exposure of the Supraceliac Aorta
The patient is placed in the supine position, and the chest, abdomen, groin, and thighs are prepped and draped. A longitudinal incision is made in the abdominal midline from the xiphoid process to the umbilicus. The peritoneal cavity is entered through the linea alba, and the abdominal viscera is packed into the lower half of the abdomen. The left lobe of the liver is retracted superiorly and to the patient’s right. Increased exposure may be gained by dividing the left triangular ligament of the liver (Fig. 9-11) and folding the left lobe of the liver under a large Deaver retractor.
Only gold members can continue reading. Log In or Register to continue

Tags: Anatomic Exposures in Vascular Surgery
May 22, 2016 | Posted by drzezo in ANATOMY | Comments Off on Upper Abdominal Aorta, Including the Visceral and Supraceliac Segments
Premium Wordpress Themes by UFO Themes
WordPress theme by UFO themes
%d bloggers like this: