Trematoda (flukes) and Cestoda (tapeworms) are the two large classes of parasites in the phylum Platyhelminthes. The most important trematodes are Schistosoma species (blood flukes), Clonorchis sinensis (liver fluke), and Paragonimus westermani (lung fluke). Schistosomes have by far the greatest impact in terms of the number of people infected, morbidity, and mortality. Features of the medically important trematodes are summarized in Table 55–1, and the medically important stages in the life cycle of these organisms are described in Table 55–2. Three trematodes of lesser importance, Fasciola hepatica, Fasciolopsis buski, and Heterophyes heterophyes, are described at the end of this chapter.

The life cycle of the medically important trematodes involves a sexual cycle in humans (definitive host) and asexual reproduction in freshwater snails (intermediate hosts) (Figure 55–1). Transmission to humans takes place either via penetration of the skin by the free-swimming cercariae of the schistosomes (Figures 55–2D and 55–3) or via ingestion of cysts in undercooked (raw) fish or crabs in Clonorchis and Paragonimus infection, respectively. 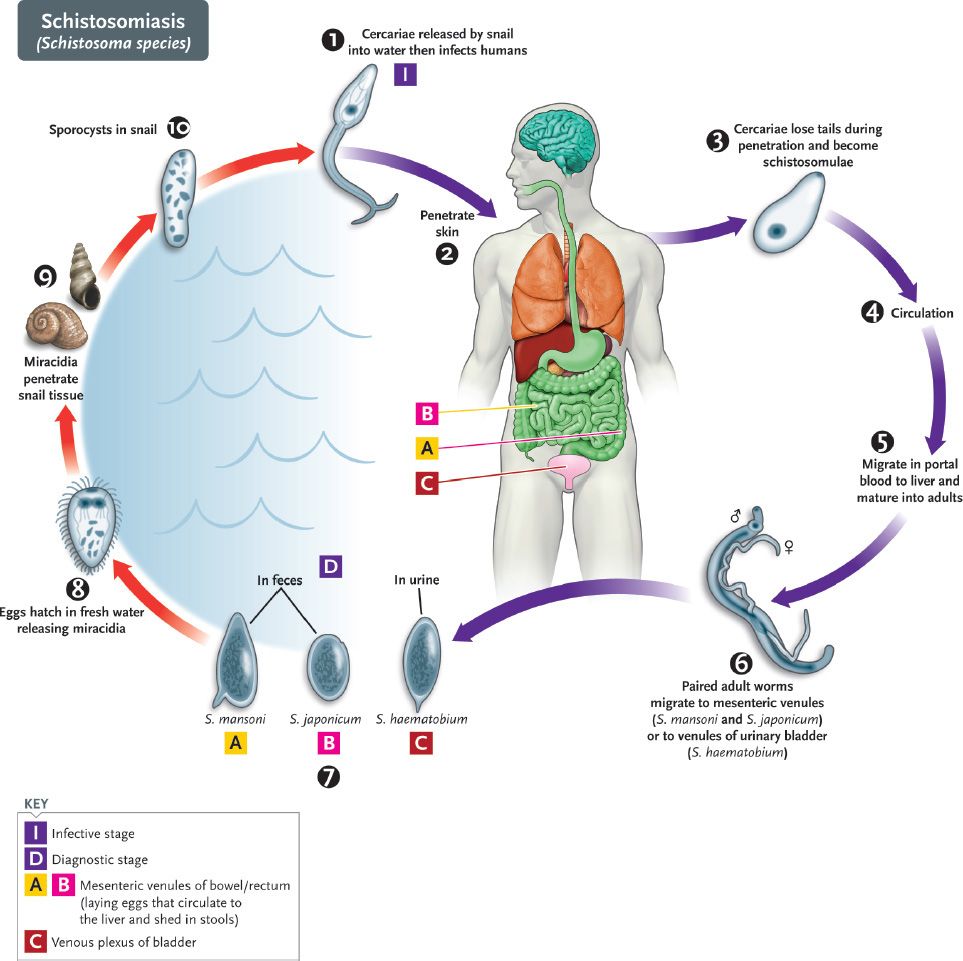 FIGURE 55–1 Schistosoma species. Life cycle. Right side of figure describes the stages within the human (blue arrows). Humans are infected at step 2 when free-swimming cercariae penetrate human skin. Cercariae differentiate into adult worms (two sexes) that migrate to the mesenteric veins (Schistosoma mansoni and Schistosoma japonicum) or the venous plexus of the urinary bladder (Schistosoma haematobium). The adult worms lay eggs, which appear in the stool (S. mansoni and S. japonicum) or the urine (S. haematobium). The eggs pass into fresh water, where the miracidia stage infects snails, which produce cercariae. Left side of figure describes the stages in fresh water and in the snail (red arrows). (Provider: Centers for Disease Control and Prevention/Dr. Alexander J. da Silva and Melanie Moser.) 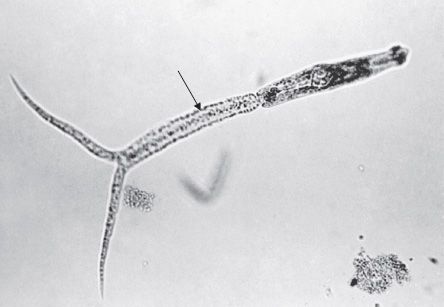 Trematodes that cause human disease are not endemic in the United States. However, immigrants from tropical areas, especially Southeast Asia, are frequently infected.

The life cycle of Schistosoma species is shown in Figure 55–1. In contrast to the other trematodes, which are hermaphrodites, adult schistosomes exist as separate sexes but live attached to each other. The female resides in a groove in the male, the gynecophoric canal (“schist”), where he continuously fertilizes her eggs (Figure 55–2A). The three species can be distinguished by the appearance of their eggs in the microscope: S. mansoni eggs have a prominent lateral spine, whereas S. japonicum eggs have a very small lateral spine and S. haematobium eggs have a terminal spine (Figures 55–4A and B, 55–5, and 55–6). S. mansoni and S. japonicum adults live in the mesenteric veins, whereas S. haematobium lives in the veins draining the urinary bladder. Schistosomes are therefore known as blood flukes. 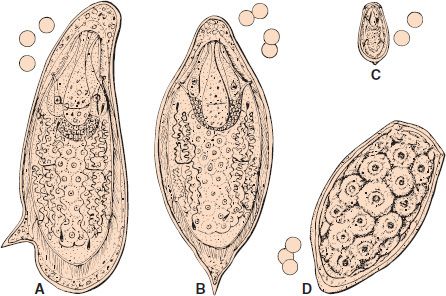 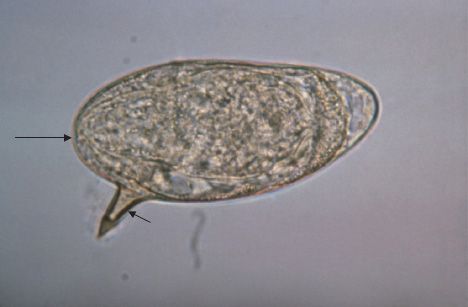 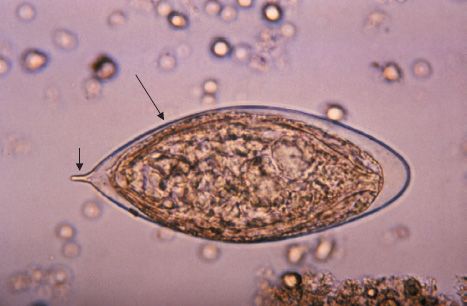 Tags: Review of Medical Microbiology and Immunology 13e
Jan 26, 2017 | Posted by admin in MICROBIOLOGY | Comments Off on Trematodes
Premium Wordpress Themes by UFO Themes
WordPress theme by UFO themes
%d bloggers like this: