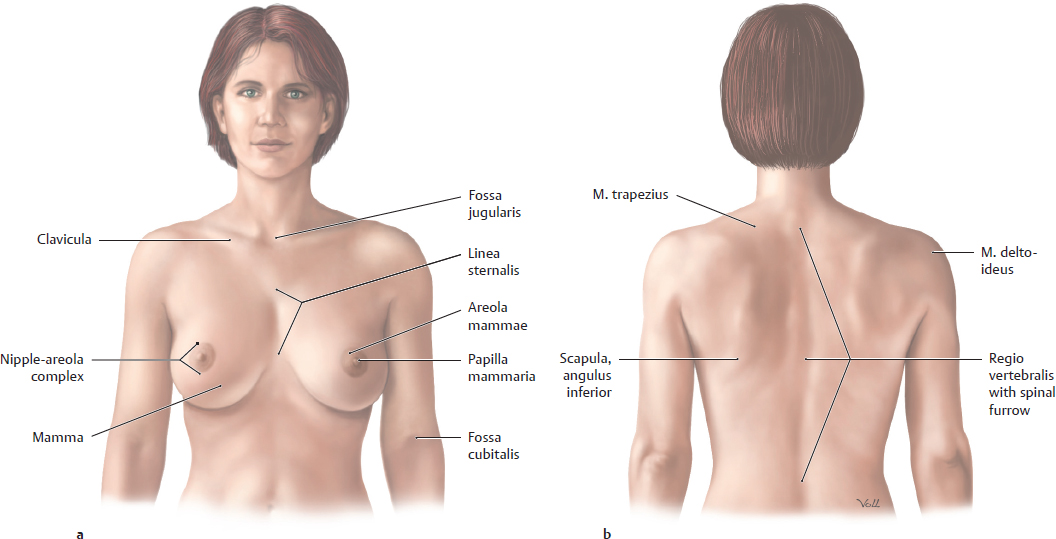 A Surface of the female thorax 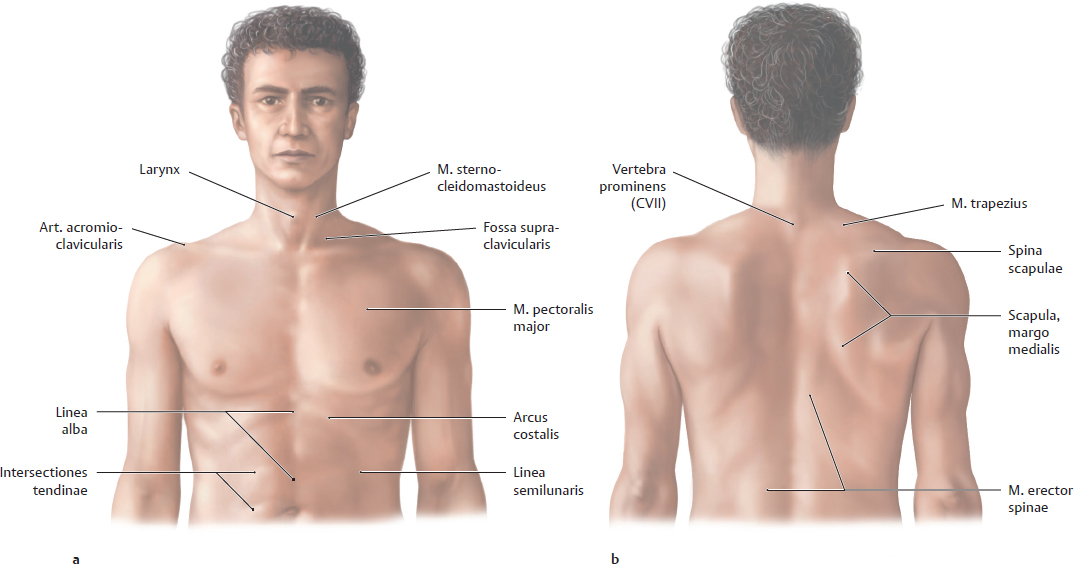 B Surface of the male thorax 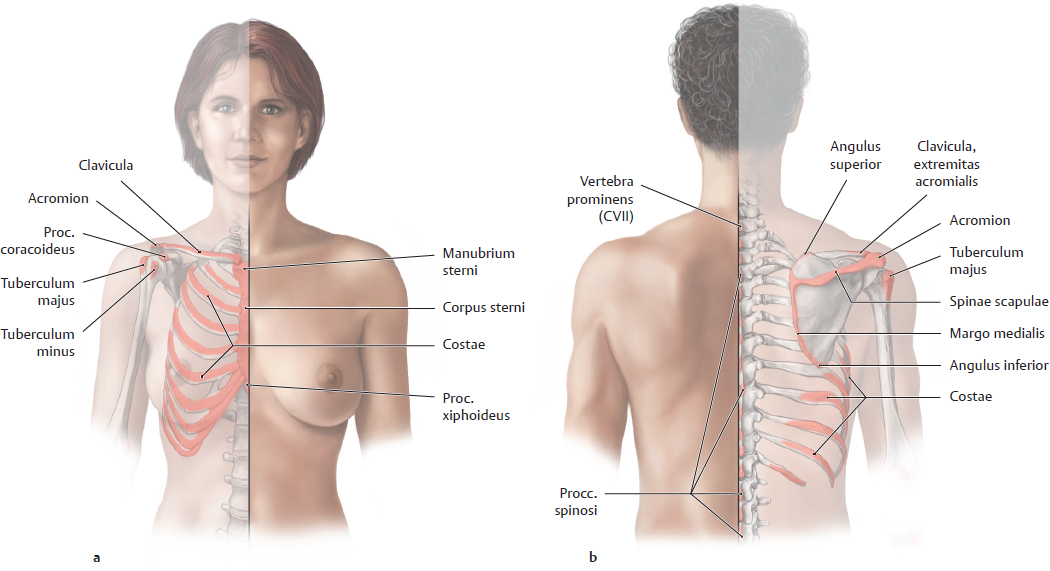 15.2 Anatomical Landmarks of the Skeleton Thoracis (Projection of Organs) 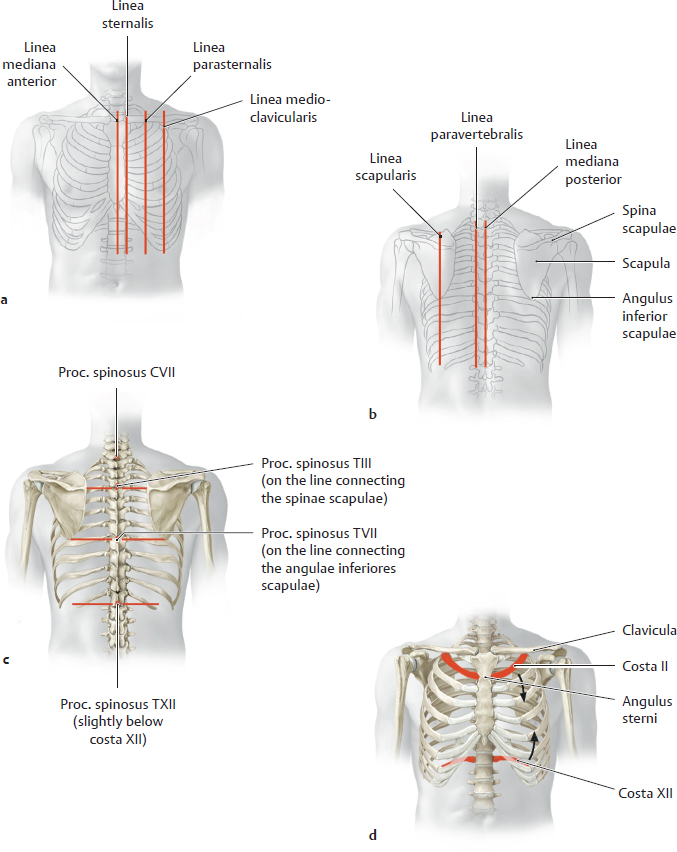 A Anatomical landmarks of the skeleton thoracis

The skeleton thoracis presents a number of visible and palpable landmarks that are accessible to physical and radiographic examination (see B). These landmarks can be used to define reference lines for describing and evaluating the location and extent of organs based on their relationship to the lines:

• Longitudinal reference lines (a, b) are defined by visible or palpable anterior (a) and posterior (b) bony structures and provide information on the location and extent of specific thoracic organs (e.g., the apical heartbeat is palpable in the left mid-clavicular line).

• Most horizontal reference lines (c) are defined by the position of specific vertebrae thoracicae. The seventh vertebra cervicalis (C 7) is easily identified by palpating its very prominent processus spinosus. It provides a starting point from which the examiner can locate all 12 vertebrae thoracicae (T 1–T 12). The levels of the T 3 and T 7 vertebrae correspond respectively to the medial end of the spina scapulae and the angulus inferior of the scapula.

• The ribs as anatomical landmarks (d). The levels of intrathoracic organs also correlate with specific ribs and spatia intercostalia, particularly on the anterior side. The costa prima is usually difficult to palpate because it is behind the clavicula. The costa secunda, however, is attached to the palpable angulus sterni (where the corpus and manubrium sterni join). Past the costa secunda, the examiner should have no difficulty counting down the remaining ribs.

B Projection of anatomical structures onto the vertebrae thoracicae 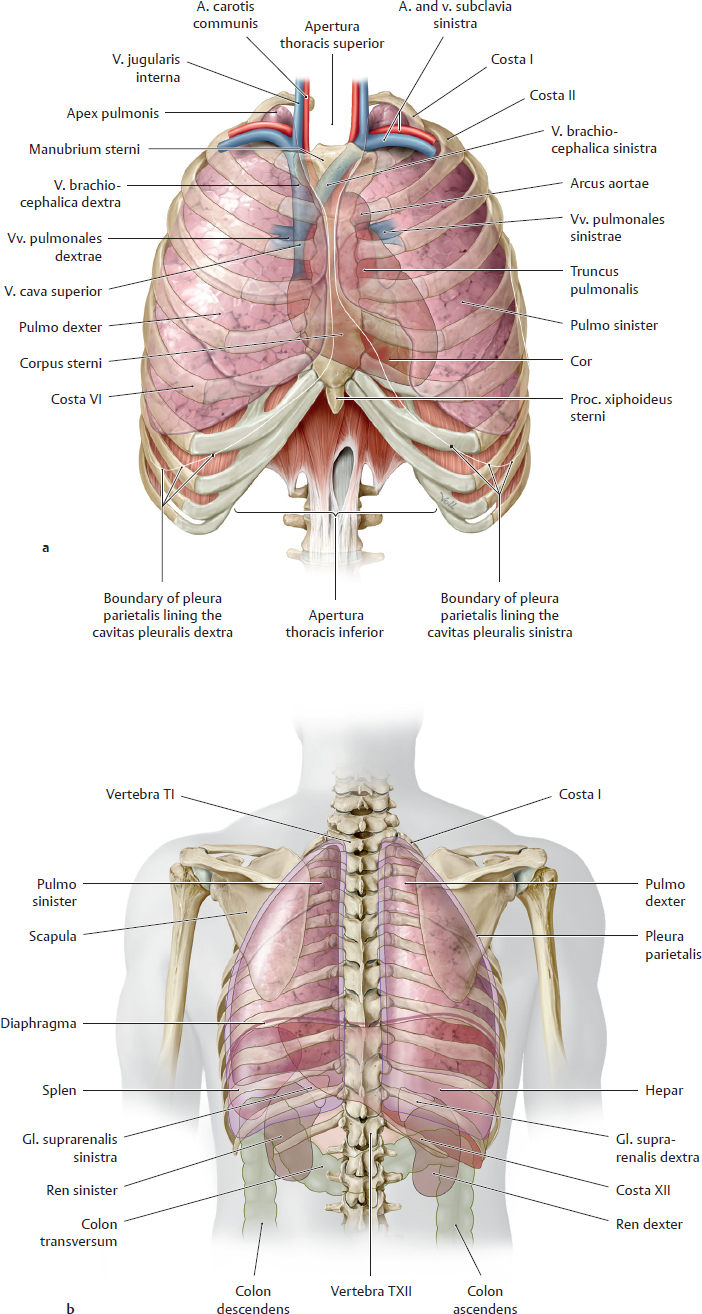 C Overview of the thorax

a Anterior view. The mm. intercostales, fasciae, and abdominal organs have been removed. b Simplified schematic view from the posterior side. The scapulae and several abdominal organs have been outlined for clarity. The cavitas thoracis is one of the three main body cavities, along with the cavitates abdominis and pelvis. The wall surrounding the cavitas thoracis consists of

• bones: 12 vertebrae thoracicae, 12 pairs of costae, and the sternum

The cavitas thoracis is divided into the centrally located unpaired mediastinum, which contains the mediastinal organs, and the paired cavitates pleurales. The mediastinum contains the central motor of the circulatory system, the cor, and the thoracic part of the digestive system, the oesophagus. The cavitates pleurales enclose the major organs of respiration, the pulmones. Also, a number of neurovascular structures pass through or terminate within the thorax.

Note: The diaphragma is normally in the shape of a high dome, with a substantial superior convexity that places part of the cavitas abdominis above the apertura thoracis inferior (see the abdominal organs shadowed in b). A perforating injury perpendicular to the trunk wall, as from a gunshot or stab wound, may thus simultaneously breach both the cavitates abdominis and thoracis (“multicavity injury”).

15.3 Structure of the Anterior Thoracic Wall and its Neurovascular Structures 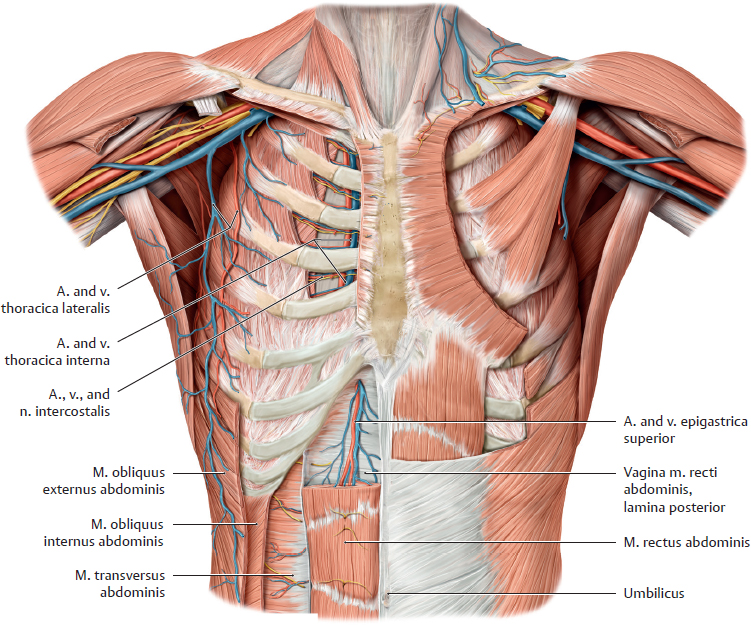 A Neurovascular structures of the anterior trunk wall

Anterior view. On the right side of the trunk, the mm. pectorales major and minor have been completely removed and the mm. obliqui externus and internus abdominis have been partially removed to display both epifascial (subcutaneous) and deep (subfascial) neurovascular structures. For the depiction of the a. and vv. epigastricae superiores the superior part of the right m. rectus abdominis has been removed or rendered transparent. In order to illustrate the course of the aa. and vv. intercostales, the spatia intercostalia have been exposed. 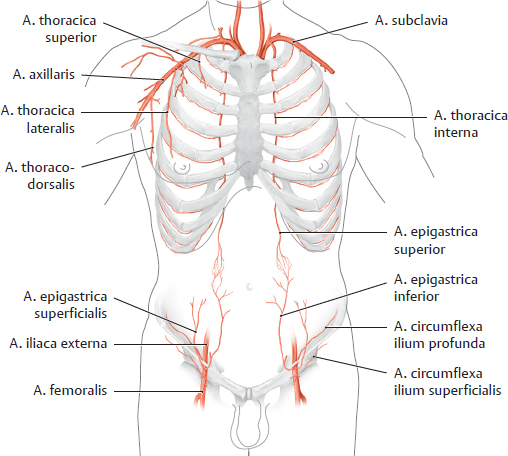 B The arterial supply of the anterior trunk wall 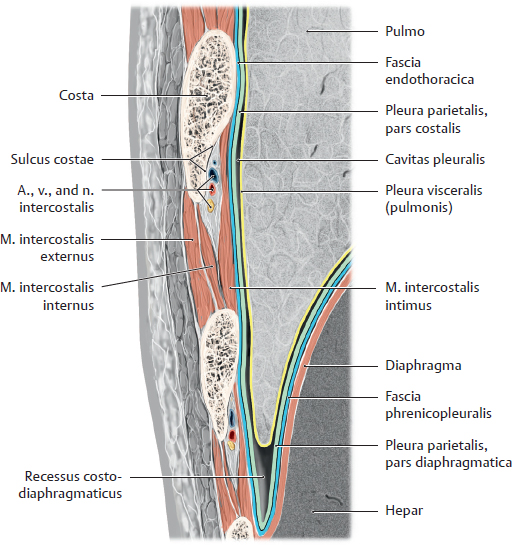 Coronal section through the lateral thoracic wall and recessus costodiaphragmaticus. 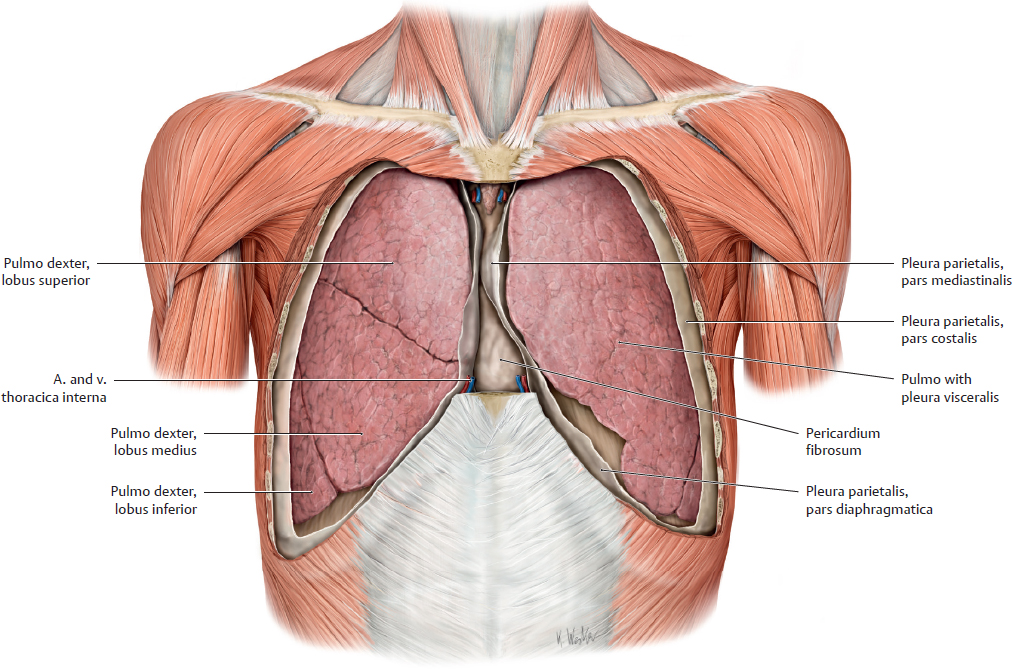 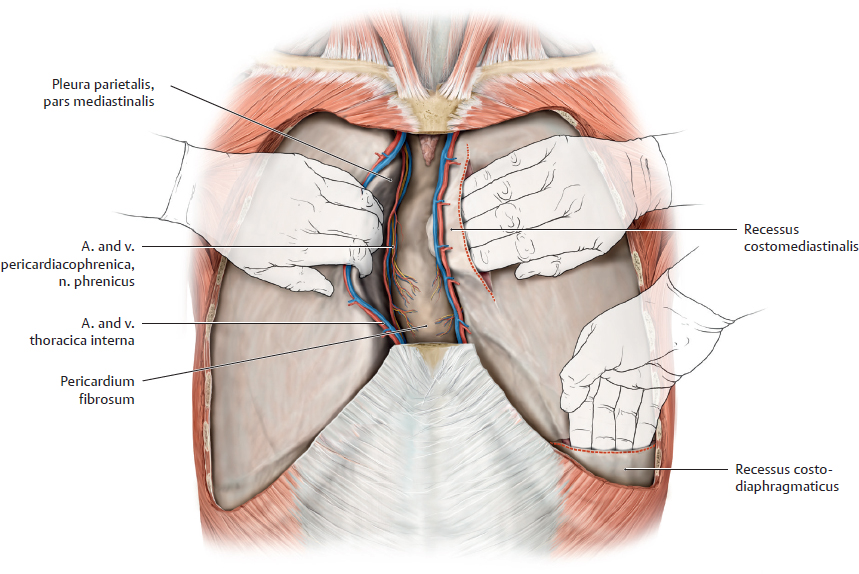 On the left side, the pleura parietalis has been slit open parasternally and above the 9th rib so that the recessus costomediastinalis and costodiaphragmaticus can be located with the fingertips. On the right side, the pulmo together with its pars mediastinalis pleurae has been carefully loosened from the pericardium in order to display the a. and v. pericardiacophrenica and n. phrenicus. 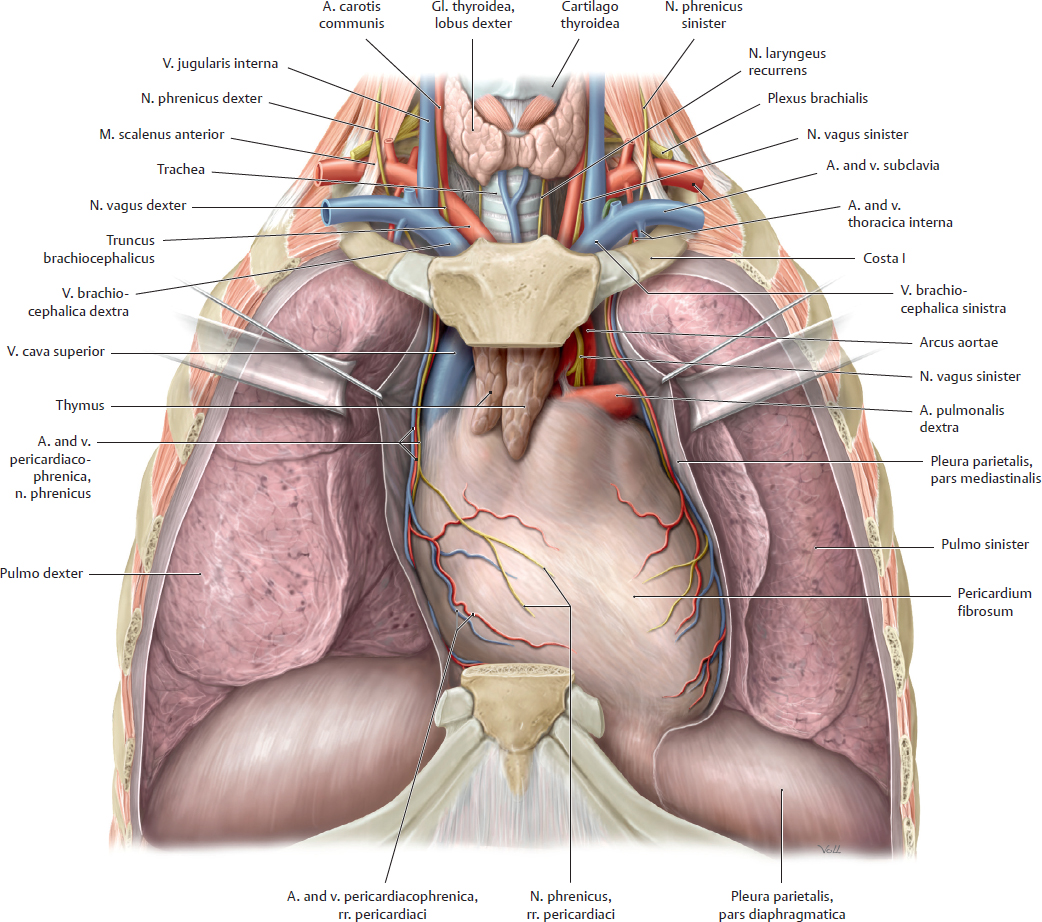 A Mediastinum, anterior view with the anterior thoracic wall removed

Coronal section through the thorax. All connective tissue has been removed from the mediastinum anterius. This dissection displays a prominent thymus, occupying the mediastinum superius and extending inferiorly into the mediastinum anterius. Visible structures that are continued from the mediastinum superius into the neck or upper limb include branches of the arcus aortae, the v. cava superior, and the trachea, although the latter is mostly obscured by the vessels surrounding the cor. The mediastinum medium, visible in this coronal section, is dominated by the cor and pericardium (fused to the diaphragma) and the associated neurovascular structures—the n. phrenicus and a. and v. pericardiacophrenica. These vessels descend along the pericardium toward the diaphragma while giving off rr. pericardiaci. 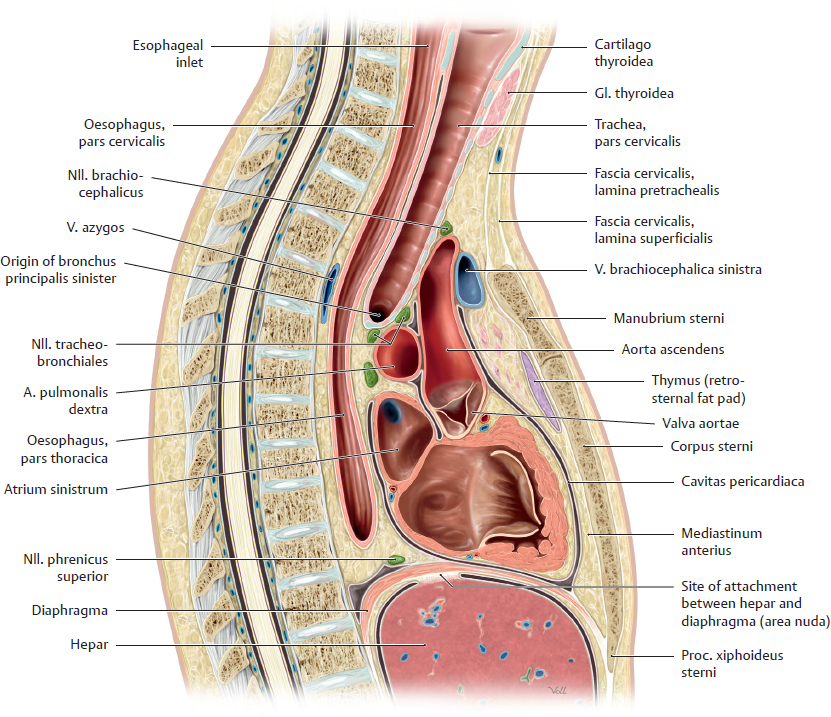 B Lateral view of the mediastinum

Midsagittal section; viewed from the right side. The pericardium, cor, trachea and oesophagus have been cut open, simplified drawing.

This lateral view demonstrates the anterior-to-posterior shift of the trachea, located directly in front of the oesophagus, as it descends through the neck and extends into the thorax. After entering the thorax through the apertura thoracis superior, it passes posteriorly to the vessels near the cor. The oesophagus is located in the immediate vicinity of the atrium sinistrum. 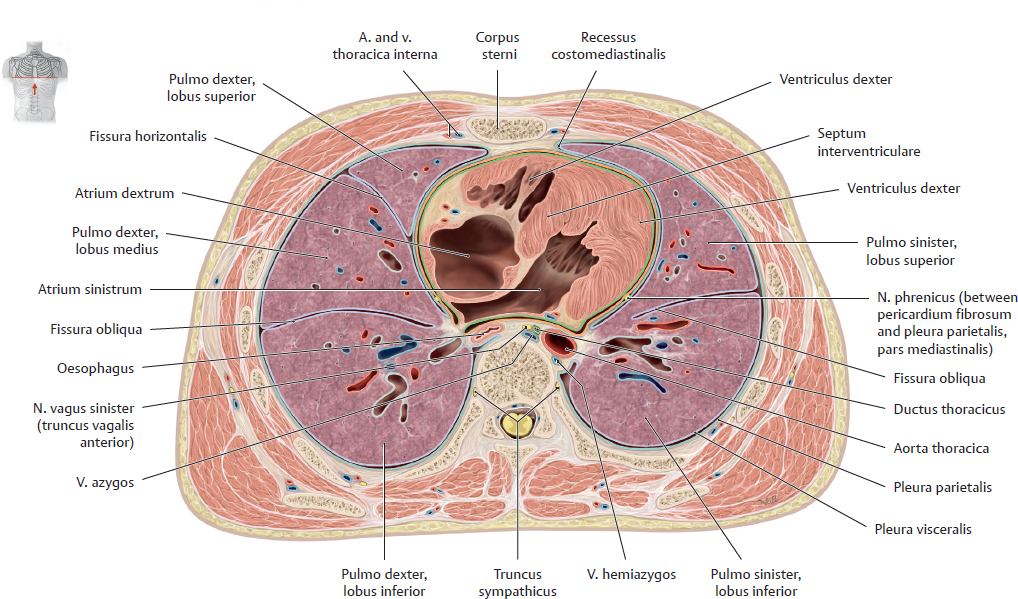