The use of botulinum neurotoxin in spasticity using ultrasound guidance

Echogenicity may vary somewhat with different ultrasound probe frequencies and machine set-up. Usually, the main ultrasound technique to observe skeletal muscles is the brightness mode (B-mode), which provides a two-dimensional image with different brightness points in a gray scale. Surrounding tissue also influences echogenicity through beam attenuation. Normal muscle is relatively black with hypoechoic intensity; between muscle fibers, some hyperechoic interfaces may be seen (reflections of perimysial connective tissue). Hyperechoic fascia surrounds each muscle belly, delineating the muscle groups. The boundaries of the muscle are clearly visible, as the epimysium surrounding the muscle is a highly reflective structure (Fig. 17.2).

The acoustical impedance is very different between muscles and bones, causing a strong reflection with hardly any sound passing through. In normal subjects, the echo from the bone and periosteum forms a highly reflective hyperechoic linear or curvilinear line with a characteristic anechoic bone shadow underneath (Fig. 17.1). The hyperechoic tendon consists of parallel fibers running in the long axis of the tendon. The tendon sheath is hyperechoic and separated from the tendon by a thin hypoechoic area (Bradley and O’Donnell, 2002). Nerves are relatively hyperechoic, linear nerve bundles being separated by hyperechoic interfaces, whereas blood vessels are hypo- or anechoic circles or lines depending on the direction of the ultrasound beam. To correctly identify blood vessels in muscle sections, power Doppler imaging is used as it shows blood flow (Fig. 17.3).

In neuromuscular disorders such as spasticity, when the muscle tissue is replaced by fat and by infiltration of intramuscular connective tissue (fibrosis), the ultrasound beam encounters tissues with different acoustic impedance and much reflection. This explains why the muscle ultrasound image appears white (Fig. 17.4).

Subcutaneous fat is hypoechoic, but the echogenicity varies in different anatomies and pathologies, and several echogenic septa of connective tissue may be visible within this tissue. Other fatty areas may vary in echogenicity depending on their structure and surrounding tissue.

Skeletal muscle ultrasound examination can be performed by a transverse or longitudinal evaluation. In the transverse plane, perpendicular to the long axis of the muscle, the muscle has a speckled appearance, whereas in the longitudinal plane (along the long axis of the muscle) the fascicular architecture of the muscle becomes visible (Pillen, 2010). Usually, a probe with a resolution of 7.5–12 MHz is adequate to observe all superficial muscles, but it is not useful for the identification of individual small muscles. For small muscles, a high frequency (18 MHz) with a corresponding higher resolution transducer must be used. In the case of deeper muscles, it is possible to use lower frequencies (5–7.5 MHz) or a convex transducer.

Why use ultrasound guidance?

Ultrasonography is well established as a reliable and reproducible imaging method in muscle anatomy (Bradley and O’Donnell, 2002) and several studies have shown applicability of the procedure for visually controlled BoNT injections as an alternative to electrophysiological techniques (Willenborg et al., 2002; Westhoff et al., 2003; Berweck et al., 2004). Kwon and colleagues (2010) compared the clinical outcomes of two different BoNT injection guidance techniques, electric stimulation and ultrasound, into both gastrocnemius muscles in 30 children with cerebral palsy. Gait pattern and hindfoot position–maximum foot/floor contact during stance significantly improved in the ultrasound-guided group while no statistical differences were noted in the Modified Ashworth Scale, Modified Tardieu Scale or Selective Motor Control. These authors concluded that visual feedback by ultrasonography could improve the accuracy of selective neuromuscular blocking of the gastrocnemius muscles.

An additional advantage of ultrasound guidance may also be a reduction in the time required for muscle identification. Berweck and colleagues (2004) assessed more than 6000 ultrasound-guided BoNT injections and demonstrated that the average time to identify and inject the targeted muscle ranged from 5 seconds in superficial muscles such as the gastrocnemius muscle to 30 seconds in deep-seated muscles such as the tibialis posterior or the iliopsoas muscle.

It is known that immobilization and spasticity lead to changes in muscle morphology over time, represented by atrophy, fibrosis and fat replacing sarcomeres. Therefore, a risk of BoNT administration is the needle’s insertion over the thickness of target muscle, particularly in cases of atrophy and for small and superficial muscles. The advanced ultrasound machines show the exact muscle depth measured in centimeters, allowing the choice of a specific sized needle for injection. For example, to inject gastrocnemius muscle, it is sufficient to use a 25-gauge (0.5 mm × 16 mm) needle. The injection of soleus muscle with the same needle may be difficult in adult patients considering its depth (Fig. 17.6).

In obese patients, the needle needs to pass through the fat between skin and superficial aponeurosis of each muscle. Immobilization and spasticity of the arm disrupts the normal muscle architecture through the infiltration of fat and the development of fibrosis. Ultrasound guidance avoids administration of BoNT into fibrotic or fatty areas and increases its accuracy.

Ultrasound guidance for BoNT administration can also facilitate the identification of nerves and vessels, thereby avoiding unwanted bleeding and enhancing the accuracy of BoNT placement (Fig. 17.1). It also allows estimation of muscle volumes so that the amount of BoNT needed for specific muscles can be calculated. However, ultrasound technology is unable to register muscular hyperactivity or to localize neuromuscular junctions. There is evidence from animal models and clinical studies that distance to neuromuscular junctions influences efficiency of BoNT treatment.

Transverse as opposed to longitudinal scans permit “panoramic” images, which make it possible to visualize several muscles in one plane. In this mode, the injector can move the probe laterally or medially along the target muscle’s areas, facilitating the identification of muscles that are to be treated with BoNT. Moreover, the injector can activate the muscle identified, consider their motor function biomechanically and can observe this activation with the probe.

Before proceeding to the injection, it is better to prepare several needles of various sizes for the different muscle depths (Fig. 17.7). To observe the correct placement into target muscles, it is important to introduce the needle tip under ultrasound beam at an angle of 30 degrees with the axis of the probe. The needle is identified directly as an echogenic line or indirectly by imaging the movements of the surrounding soft tissues during real-time observation (Fig. 17.8).

Fig. 17.8 Hyperechogenic appearance of the needle in the muscle.

After correct placement, BoNT is injected under real-time observation mode, and by changing the position of the needle, the BoNT can be well distributed in the muscle belly. The appropriate number of injection sites usually depends on the size of the muscle. Injecting a small volume at several sites is preferred over a large volume at a single site.

In the following paragraphs, the common muscles involved in spasticity are shown with their position in upper or lower limb and their transverse ultrasound image.

The most common patterns of spasticity in the upper limb involve flexion of the fingers, wrist and elbow; adduction with internal rotation at the shoulder; and flinched fist with thumb in palm (Mayer et al., 2002). Wrist or elbow extension is less common. 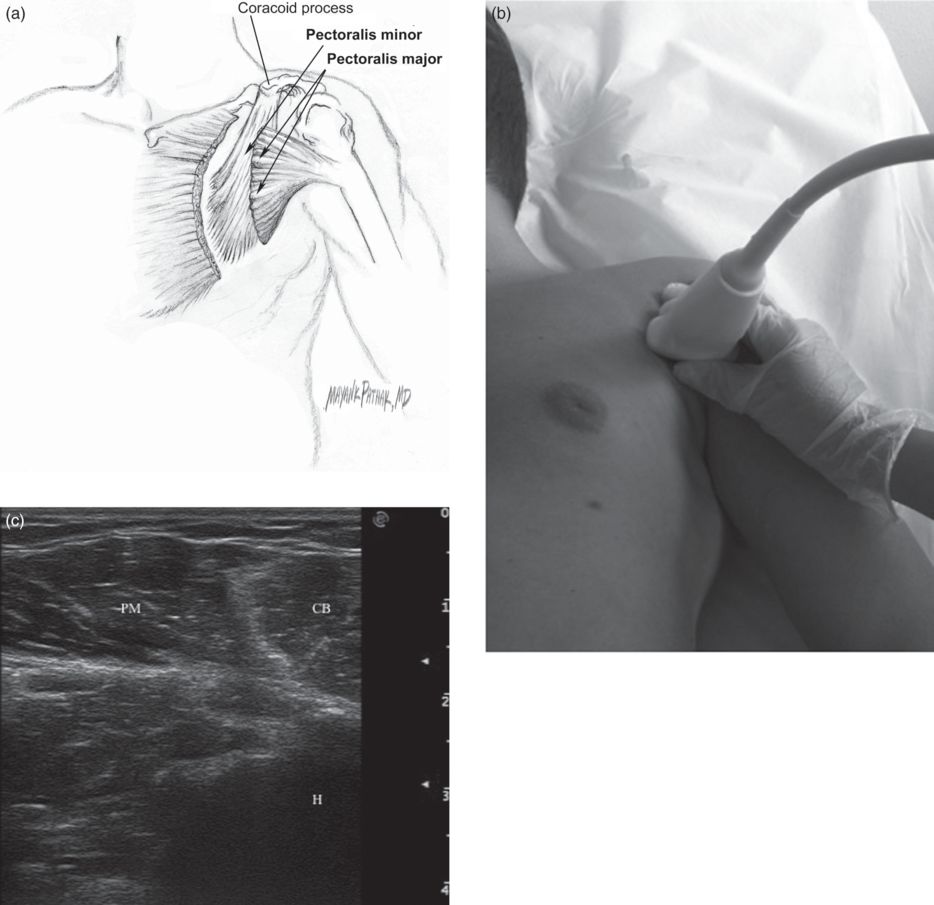 Fig. 17.9 Adduction and internal rotation of the shoulder. (a) The pectoralis major and minor muscles. (b) Position of probe for a transverse ultrasound image. (c) The left pectoralis major (PM) muscle, coracobrachialis (CB) muscle and humerus (H).

Tags: Manual of Botulinum Toxin Therapy
Oct 1, 2016 | Posted by admin in GENERAL SURGERY | Comments Off on The use of botulinum neurotoxin in spasticity using ultrasound guidance
Premium Wordpress Themes by UFO Themes
WordPress theme by UFO themes
%d bloggers like this: