The use of botulinum neurotoxin in spastic infantile cerebral palsy

Spasticity is the most common movement disorder, affecting between 60% and 80% of children with cerebral palsy (Fig. 15.1). Spasticity is defined as hypertonia in which one or both of the following signs are present:

When focal, spasticity is often managed by injections of botulinum neurotoxin (BoNT). When severe or generalized, spasticity may be managed by selective dorsal rhizotomy or intrathecal baclofen. 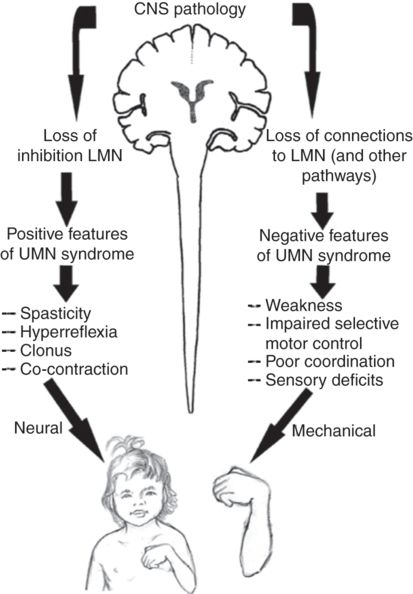 Dystonia is characterized by involuntary sustained or intermittent muscle contractions that cause twisting and repetitive movements, abnormal postures, or both. Focal dystonia may also be treated with BoNT. In generalized dystonia, intrathecal baclofen may have a role. However, selective dorsal rhizotomy does not appear to offer improvement.

Athetosis, or intermittent writhing movement, is also very common. It is sometimes managed by oral medications and when severe by intrathecal baclofen pump, but never by selective dorsal rhizotomy.

Ataxia is less common in cerebral palsy and is difficult to treat successfully. In addition to the overactivity (positive) features of cerebral palsy such as spasticity and dystonia, there are also negative features – principally weakness and loss of selective motor control. In the long term, weakness and difficulty in controlling muscles have a much greater impact on gross motor function than the various forms of muscle overactivity. Nevertheless, spasticity has been implicated in the development of fixed deformities, which can further impair function and quality of life in the child or adolescent affected by cerebral palsy.

Understanding the topographical distribution of symptoms and recognizing the common clinical patterns of muscle overactivity form the basis for development of management strategies. These patterns are reviewed as the basis for intervention with BoNT and other therapies before turning to injection techniques.

As indicated in Box 15.1, involvement may be unilateral (monoplegic or hemiplegic) or bilateral (diplegic, paraplegic or quadriplegic). Spastic diplegia usually refers to individuals with minimal involvement of the upper limbs but bilateral lower limb involvement. Spastic quadriplegia refers to individuals with involvement of all four limbs, with the upper limbs sometimes more affected than the lower limbs. However, the differentiation between spastic diplegia and spastic quadriplegia is not clear cut and it is more clinically useful to classify bilateral cerebral palsy according to gross motor function, as noted above. 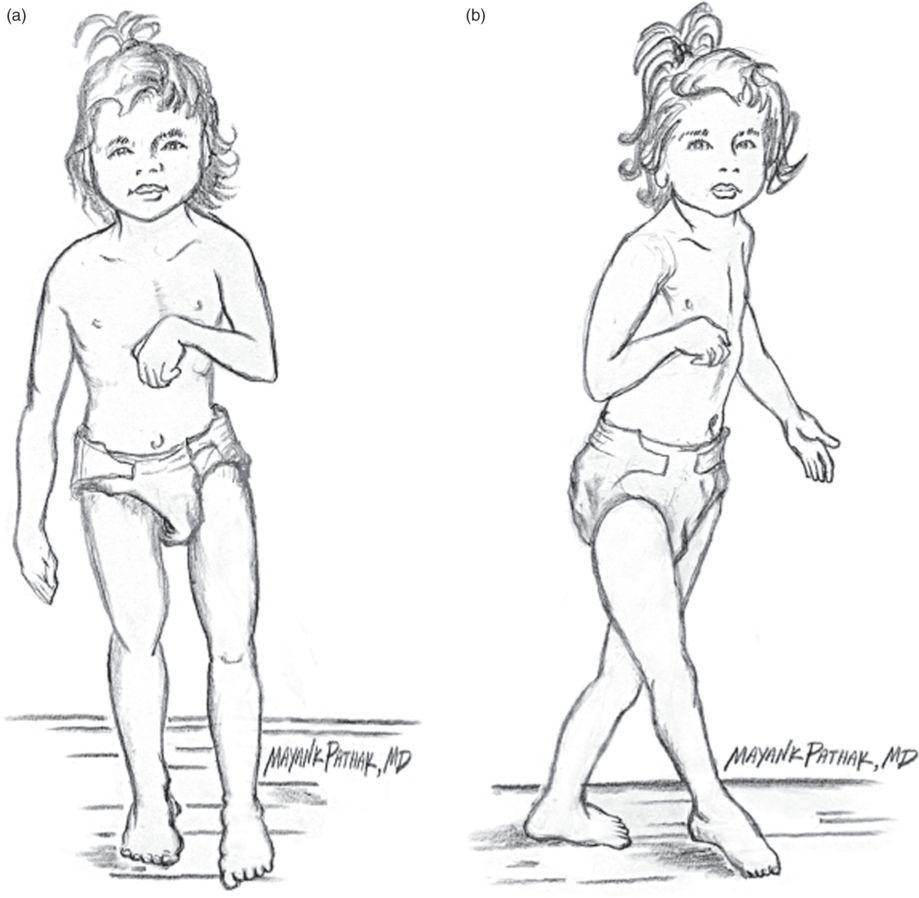 Typical upper limb posturing includes adduction and internal rotation at the shoulder, pronation and flexion at the elbow/forearm, and flexion and ulnar deviation at the wrist with flexed digits and “thumb in palm.” The muscles typically involved in each pattern are indicated in Table 15.1, along with guidelines for injection of BoNT-A as onabotulinumtoxinA (Botox, Allergan, Irvine, CA, USA). 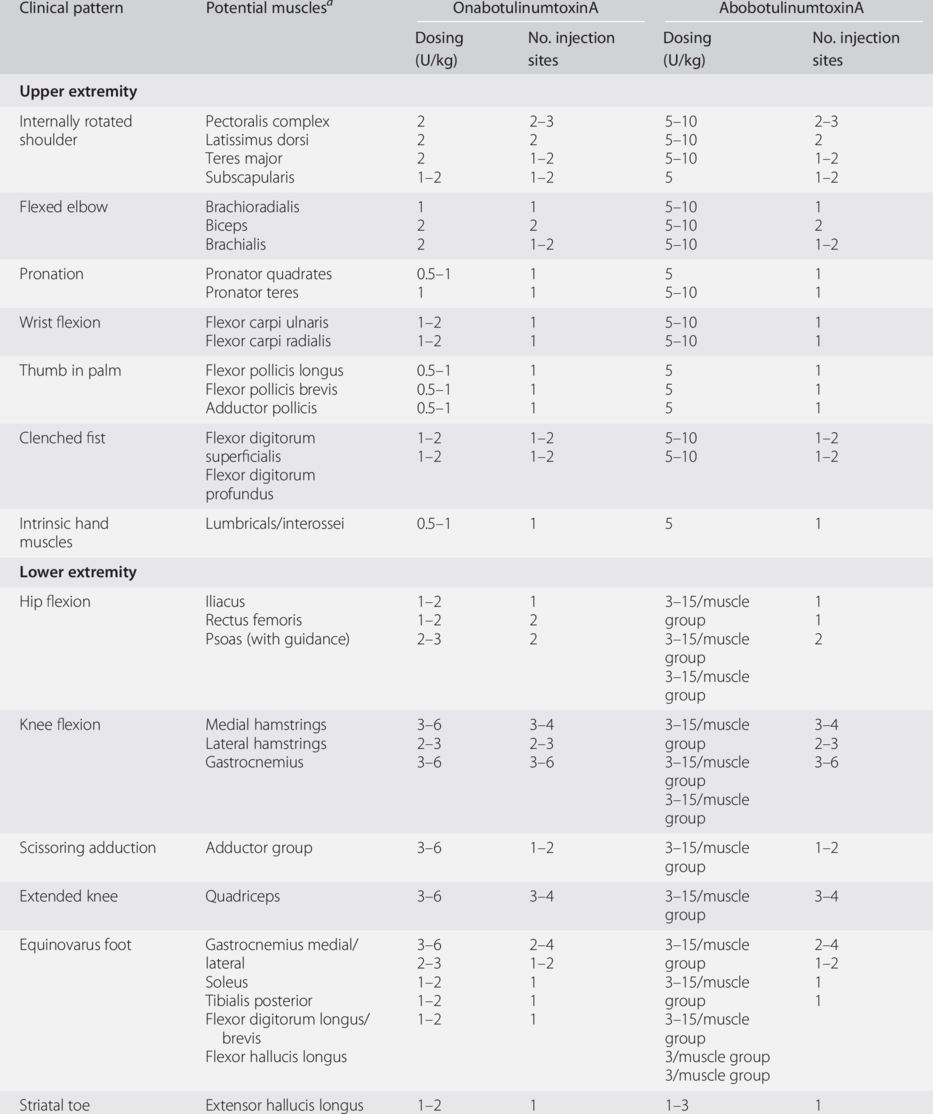 a See Chapters 10 and 14 for illustrations of the position of the muscles described in the table.

Without intervention, spastic posturing in the hemiplegic upper limb can progress to painful fixed contracture and deformities, which further impair function, and cosmesis. It is tempting to think that the spasticity or dystonia is the main functional limitation in the hemiplegic upper limb, and that relaxing the overactive muscles will necessarily restore function. On the contrary, the main barriers to function are impaired selective motor control and sensation. Muscle relaxation may set the stage for functional gains but may not be adequate by itself. Therefore, focal treatment with BoNT alone is rarely indicated and it should usually be combined with a program of splinting and occupational therapy or upper limb training.

The involved lower limb is usually slightly shorter than that on the uninvolved side, with muscle atrophy particularly affecting the calf muscle. Typically, involvement is more pronounced distally than proximally (Box 15.2).

Box 15.2 Grading of lower limb involvement in spastic hemiplegia
Only gold members can continue reading. Log In or Register to continue

Tags: Manual of Botulinum Toxin Therapy
Oct 1, 2016 | Posted by admin in GENERAL SURGERY | Comments Off on The use of botulinum neurotoxin in spastic infantile cerebral palsy
Premium Wordpress Themes by UFO Themes
WordPress theme by UFO themes
%d bloggers like this: