The Brain, Spinal Cord, and Meninges

3.  At autopsy, the brain of a 35-year-old man with history of AIDS shows diffuse edema and opacification of the leptomeninges. On histologic examination, the subarachnoid space is filled with the organisms seen in this GMS-stained section and a scanty mononuclear infiltrate. The organism has a thick PAS-positive capsule. Which of the following is the etiologic agent? 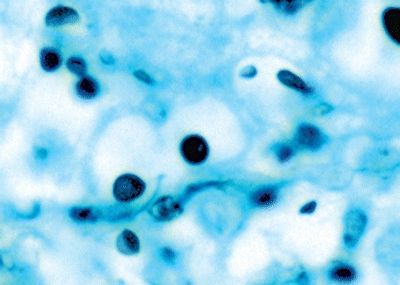 4.  CT studies show bilateral hemorrhagic lesions in the temporal lobes of a 35-year-old male with fever and mental status changes. A biopsy reveals perivascular lymphocytic cuffing and Cowdry type A inclusion bodies. Which of the following is the most likely etiologic agent?

5.  Progressive multifocal leukoencephalopathy (PML) is most common in immunocompromised patients, especially those with AIDS. Which of the following is the etiologic agent of this condition?

6.  Autopsy investigations on a 42-year-old HIV-positive male reveal mild cerebral atrophy without focal lesions. Histologically, there are multifocal lymphohistiocytic infiltrates and clusters of inflammatory cells such as those shown in the picture. Which of the following is the most likely diagnosis? 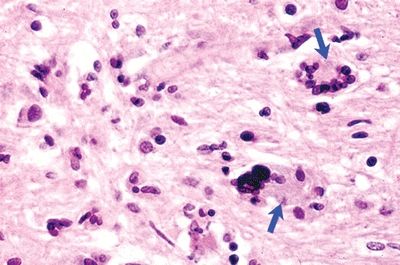 7.  A 40-year-old female presents with seizures of recent onset. MRI shows a ring-enhancing mass in the right parietal lobe. A primary neoplasm or infectious process is suspected. Which of the following tumors is least likely in this case?

8.  A previously healthy, immunocompetent 42-year-old woman presents with acute onset of right hemiparesis. MRI shows a ring-enhancing mass in the white matter of the left frontal lobe. A biopsy of the lesion reveals necrotic area surrounded by foamy macrophages, perivascular lymphocytic cuffing, and reactive astrocytes. Scattered Creutzfeldt cells are also seen. Immunostain for neurofilament reveals preserved axons. Which of the following is the underlying condition?

9.  A patient with seizures undergoes surgery for resection of a right frontal lesion. On H&E-stained sections, the lesion is composed of thin-walled (capillary-like) vessels with little intervening parenchyma. Some hemosiderin deposits and Rosenthal fibers are noted around it. Elastic stains do not reveal elastic tissue within the vessel walls. Which of the following is the most likely diagnosis?

10.  Which of the following vascular lesions is shown in this photomicrograph of a brain section stained for elastin? 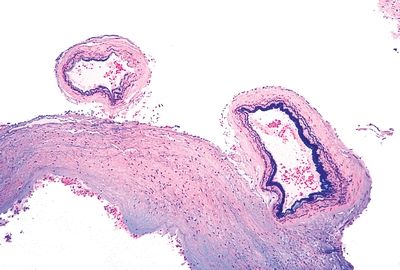 11.  A CT scan shows an intracerebral hemorrhage located superficially within the right frontal lobe of a 75-year-old man. After surgical evacuation of the hematoma, a Congo red stain reveals cortical and leptomeningeal arterioles similar to that shown in this photomicrograph. Which of the following is the most likely underlying cause of the hemorrhage? 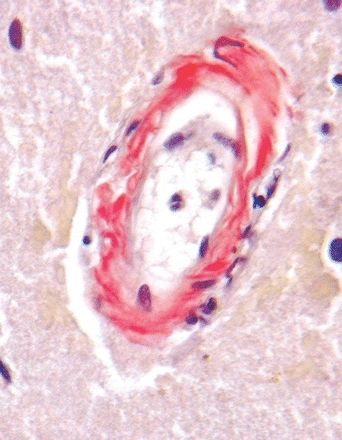 12.  Which of the following vascular changes is expected to be seen by light microscopy in a skin biopsy from a patient with cerebral autosomal dominant angiopathy with subcortical infarcts and leukoencephalopathy (CADASIL)?

A.  Congo red–positive material in the media

B.  Hyalinization and thickening of media

13.  Which of the following is the most frequent primary malignant tumor of the central nervous system?

14.  A cystic tumor is resected from the right cerebellar hemisphere of a 15-year-old patient. Histologically, it is composed of spindly cells, as shown in this picture. The neoplasm has a biphasic pattern, with alternating compact and microcystic areas. Rosenthal fibers are numerous in the compact areas. Cells are immunoreactive for GFAP. According to the WHO grading system, this tumor is: 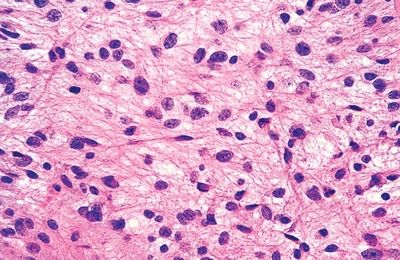 15.  A 2-year-old child undergoes excision of a neoplasm located near the optic chiasm. It consists of bipolar cells similar to the cells of pilocytic astrocytoma, which are arranged in an angiocentric fashion within a myxoid background. The architecture is not biphasic, and there are no Rosenthal fibers. According to the WHO grading system, this tumor is:

16.  A 33-year-old man presents with seizures. MRI scans show an ill-defined area of T2 hyperintensity in the white matter of the left frontal lobe. A biopsy of the lesion shows a glial population with slightly increased cellularity compared with normal white matter and mild nuclear pleomorphism. No mitotic activity, necrosis, or microvascular hyperplasia is detected. Neoplastic cells express GFAP. Which of the following is the most likely diagnosis?

17.  The variant of astrocytoma depicted in this photomicrograph is known as: 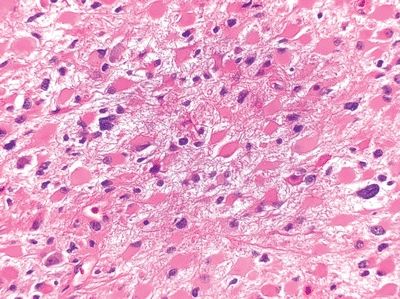 18.  A 45-year-old woman presents with right-sided paresthesias. MRI scans show an ill-defined mass in the white matter of the left parietal lobe. The tumor exhibits mild contrast enhancement. A biopsy of the lesion reveals an astrocytic neoplasm with moderate nuclear pleomorphism. Mitotic figures are found, but there is no necrosis or microvascular hyperplasia. Neoplastic cells express GFAP. According to the WHO grading system, this tumor is:

19.  The biopsy of a ring-enhancing tumor in the left parietal lobe of a 60-year-old patient reveals an astrocytic tumor (GFAP positive) displaying the features shown in these two pictures. The diagnosis is: 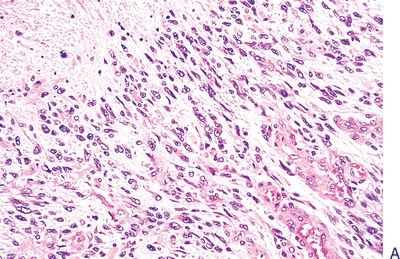 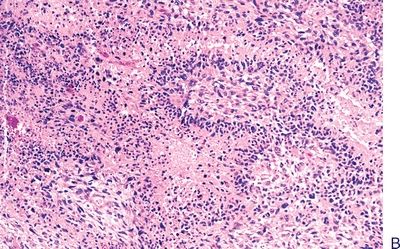 20.  Which of the following genetic/chromosomal abnormalities in glioblastomas is predictive of a better response to treatment with alkylating agents such as temozolomide?

A.  Inactivation of INI1

21.  This picture shows a morphologic variant of glioblastoma. Does this variant have a different prognosis compared to conventional GBM? 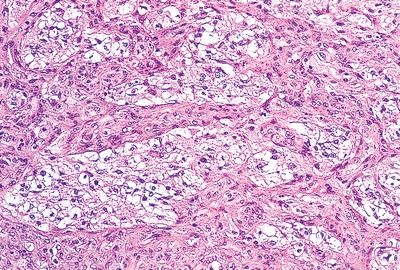 22.  A biopsy of a mass growing from the floor of the lateral ventricle reveals a glial tumor composed of highly pleomorphic, giant astrocytes with large nuclei and prominent nucleoli, as shown in this picture. Some tumor cells express GFAp, and others express neurofilaments. The patient is affected by: 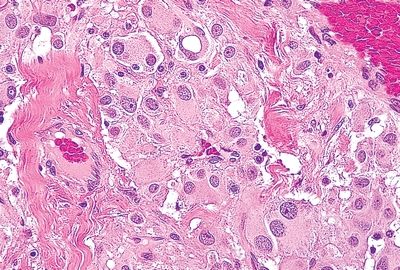 23.  A 23-year-old woman presents with a history of long-standing intractable seizures. MRI demonstrates a well-circumscribed, partially cystic, tumor in the left temporal lobe. The tumor is resected. Histologic evaluation reveals a glial neoplasm characterized by extreme cellular pleomorphism, with large cells with bizarre nuclei and finely foamy cytoplasm admixed with smaller spindly cells. In spite of marked cellular atypia, no mitotic activity, necrosis or microvascular hyperplasia is detected. Special stains reveal a rich pericellular reticulin network. Most tumor cells express GFAP, and some express neuronal markers. Ki-67 labeling index is below 3%. Which of the following is the most likely diagnosis?

24.  A biopsy of a brain tumor reveals homogeneous cellular composition, which is shown in this photomicrograph. The neoplastic cells are negative for GFAP immunohistochemistry. These features are most consistent with: 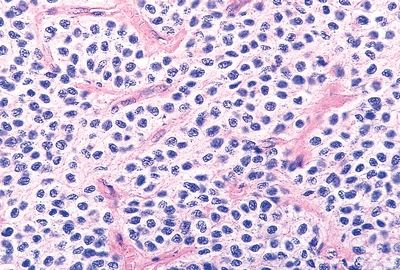 25.  Which of the following genetic alterations is pathognomonic of oligodendrogliomas?

B.  Inactivation of INI1

26.  Histologic examination of a well-circumscribed mass involving the cerebellum and fourth ventricle of an 18-year-old male reveals a tumor whose histologic appearance is shown in this picture. Which of the following is the most likely diagnosis? 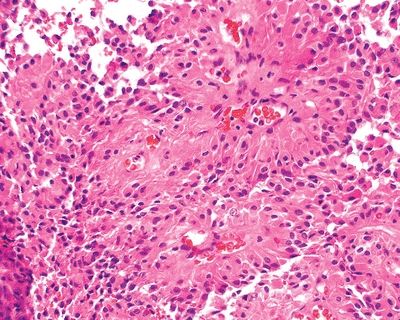 27.  These photomicrographs (H&E and mucicarmine stains) show a type of ependymoma that occurs most commonly in: 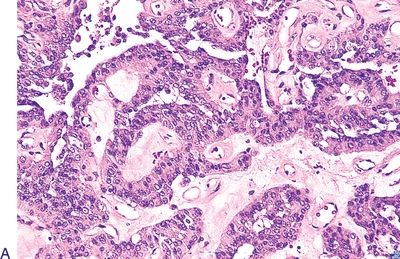 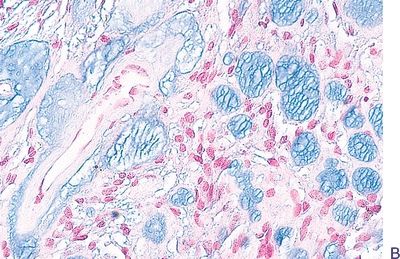 28.  Which of the following is correct about ganglioglioma?

B.  Dysplastic neuronal cells are evenly scattered throughout the tumor

C.  Not a true neoplasm but a hamartomatous lesion.

D.  Occurs most commonly in the cerebellum.

E.  Presents most frequently as a cyst with a mural nodule.

29.  Histologic examination of a midline (vermis) cerebellar tumor from a 5-year-old child shows sheets of monotonous small cells with a high nucleocytoplasmic ratio, as seen in this picture. There is mitotic activity as well as numerous apoptotic bodies. Neoplastic cells are GFAP negative but show multifocal immunoreactivity for synaptophysin. Which of the following is the most likely diagnosis? 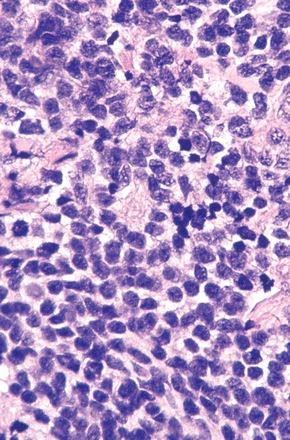