A variety of drugs are used in treating musculoskeletal (bone and muscle) injuries and disorders. When muscles are injured, typically rest, exercise, and physical therapy are used to heal the injury. Skeletal muscle relaxants are used to assist in relaxing certain muscle groups, as strains and sprains are repaired.

Chronic disease may also affect skeletal muscles, causing limitations in function. Drugs are frequently used to maintain function due to chronic illness. Examples of the drugs discussed for musculoskeletal disorders in this chapter include disease-modifying antirheumatic drugs (used to treat rheumatoid arthritis [RA]), bone resorption inhibitors (used to treat osteoporosis), and uric acid inhibitors (used to treat gout). A description of these and other musculoskeletal disorders is given in Table 30.1. The drug selected is based on the musculoskeletal disorder being treated, the severity of the disorder, and the patient’s positive or negative response to past therapy. For example, early cases of RA may respond well to the nonsteroidal anti-inflammatory drugs (NSAIDs), whereas advanced RA not responding to other drug therapies may require the use of corticosteroids or immunosuppressive drugs.

A call has been taken at the clinic from Mrs. Moore’s daughter, who lives out of town. When you contact her, she expresses concern about her mother’s balance and possible risk for falls. She asks if she (Mrs. Moore) should be taking a pill to strengthen her bones. Consider this request as you read this chapter. 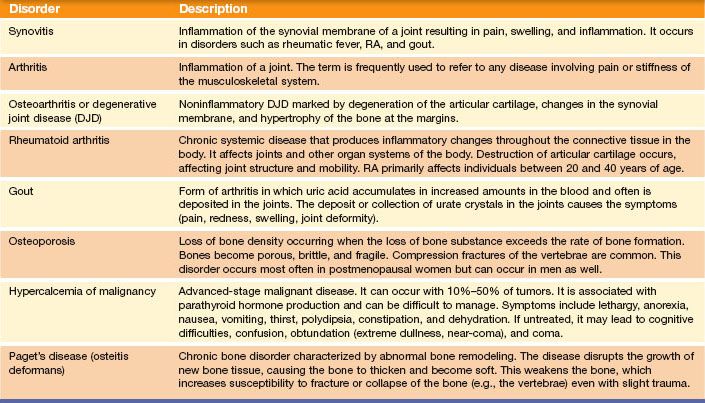 Salicylates and NSAIDs are important agents used in treating arthritic conditions. For example, salicylates and NSAIDs are used for RA (a chronic disease characterized by inflammatory changes in the body’s connective tissue) and osteoarthritis (a noninflammatory joint disease resulting in degeneration of the articular cartilage and changes in the synovial membrane), as well as for relief of pain or discomfort resulting from musculoskeletal injuries such as sprains.

RA, a chronic disorder involving the inflammation and accumulation of fluid in joints, is considered an autoimmune disease. This condition is typically treated using three classifications of drugs: NSAIDs, corticosteroids, and disease- modifying antirheumatic drugs. This section describes the disease-modifying antirheumatic drugs, frequently called DMARDs. The NSAIDs and corticosteroids are discussed in Chapters 14 and 43, respectively.

RA is an autoimmune disorder, in which antibodies are formed against one’s own body. As a defense mechanism, white blood cells are mobilized and lodge in the joints, causing swelling, pain, and inflammation (Fig. 30.1). When the immobility and pain of RA can no longer be controlled by pain relief agents and anti-inflammatory drugs, DMARDs are used. These drugs have properties to produce immunosuppression, which in turn decreases the body’s autoimmune response. Therefore, in RA treatment, DMARDs are useful for their immunosuppressive ability. Other autoimmune diseases treated with DMARDs include Crohn’s disease and fibromyalgia. (DMARDs may also be used for other purposes, such as cancer therapy, in which the immunosuppression is considered an adverse reaction rather than an intended effect.)

Cytotoxic drugs, such as azathioprine (Imuran), cyclophosphamide (Cytoxan), and cyclosporine, are reserved for life-threatening problems (such as systemic vasculitis) because they are associated with a high rate of toxic adverse reactions. Gold salts and penicillamine are considered extremely toxic and used only when other drugs fail to achieve remission. 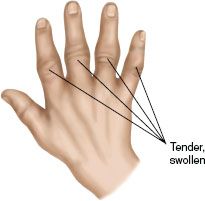 Immunosuppressive drugs can cause the following adverse reactions:

The adverse reactions to sulfa-based drugs, such as sulfasalazine, include ocular changes, gastrointestinal (GI) upset, and mild pancytopenia. The most common adverse reaction to the drugs given by injection is skin irritation. For more information, see the Summary Drug Table: Drugs Used to Treat Musculoskeletal, Bone, and Joint Disorders.

These drugs should be used with caution in patients with obesity, diabetes, and hepatitis B or C. Women should not become pregnant, and sexual partners should use barrier contraception to prevent transmission of the drug by semen.

Sulfasalazine is selected over methotrexate for patients with liver disease. Patients taking etanercept, adalimumab, or infliximab should be screened for pre-existing tuberculosis because of the increase in opportunistic infections presenting after treatment.

The following interactions may occur when a DMARD, such as methotrexate, is administered with another agent:

Because DMARDs are designed to produce immunosuppression, patients need to be monitored routinely for infections. Instruct patients to report any problem, no matter how minor, such as a cold or open sore—even these can become life-threatening.

Bisphosphonates are drugs used to treat musculoskeletal disorders such as osteoporosis and Paget’s disease (bone growth and weakening). Osteoporosis involves the loss of bone mass, seen typically in postmenopausal women. As the skeleton deteriorates there is a larger risk for fracture of the bones.

Bisphosphonates act primarily on the bone by inhibiting normal and abnormal bone resorption. This results in increased bone mineral density, reversing the progression of osteoporosis.

Bisphosphonates are used in the treatment of the following:

•  Osteoporosis in postmenopausal women and men (caused by glucocorticoid use)

•  Paget’s disease of the bone

Adverse reactions with bisphosphonates include:

Although these drugs have not been studied, if a pregnant woman presents with malignancy, their use during the pregnancy may be justified if the potential benefit outweighs the potential risk to the fetus.

The following interactions may occur when a bisphosphonate is administered with another agent:

The mode of action of many skeletal muscle relaxants, such as carisoprodol (Soma), baclofen (Lioresal), and chlorzoxazone (Parafon Forte), is not clearly understood. Many of these drugs do not directly relax skeletal muscles, but their ability to relieve acute painful musculoskeletal conditions may be due to their sedative action. Cyclobenzaprine appears to have an effect on muscle tone, thereby reducing muscle spasm.

The exact mode of action of diazepam (Valium), an antianxiety drug (see Chapter 20), in the relief of painful musculoskeletal conditions is unknown. The drug does have a sedative action, which may account for some of its ability to relieve muscle spasm and pain.

Skeletal muscle relaxants are used in various acute painful musculoskeletal conditions, such as muscle strains and back pain.

Drowsiness is the most common reaction seen with the use of skeletal muscle relaxants. Additional adverse reactions are given in the Summary Drug Table: Drugs Used to Treat Musculoskeletal, Bone, and Joint Disorders. Some of the adverse reactions that may occur with the administration of diazepam include drowsiness, sedation, sleepiness, lethargy, constipation or diarrhea, bradycardia or tachycardia, and rash.

The following interactions may occur when a skeletal muscle relaxant is administered with another agent: 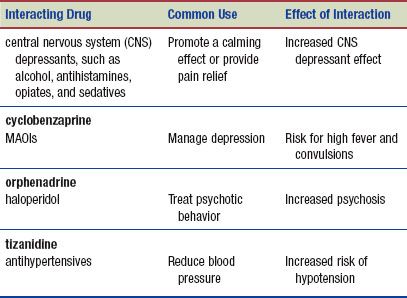 Gout is a type of arthritis in which uric acid accumulates in increased amounts in the blood and often is deposited in the joints. The deposit or collection of urate crystals in the joints causes the symptoms (pain, redness, swelling, joint deformity) of gout.

The exact mechanism of action of colchicine is unknown, but it does reduce the inflammation associated with the deposit of urate crystals in the joints. Colchicine has no effect on uric acid metabolism.

In people with gout, the serum uric acid level is usually elevated. In an acute attack, pegloticase, an IV infusion, may be used to decrease the amount of uric acid in the body. Probenecid works in the same manner and may be given alone or with colchicine as combination therapy when there are frequent, recurrent attacks of gout. Probenecid also has been used to prolong the plasma levels of penicillins and cephalosporins.

One adverse reaction associated with allopurinol is skin rash, which in some cases has been followed by serious hypersensitivity reactions, such as exfoliative dermatitis and Stevens-Johnson syndrome. Colchicine administration may result in severe nausea, vomiting, and bone marrow depression; therefore, it is used as a second line of treatment when other drugs fail.

Anaphylactic reactions have been seen with pegloticase infusions; therefore, antihistamines and corticosteroids are used to premedicate patients.

The following interactions may occur when a uric acid inhibitor is administered with another agent: 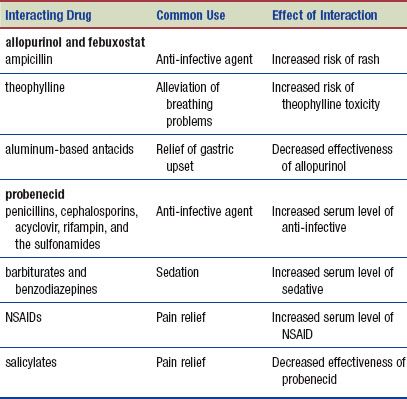 Glucosamine and chondroitin are used, in combination or alone, to treat arthritis, particularly osteoarthritis. Chondroitin acts as the flexible connecting matrix between the protein filaments in cartilage. Chondroitin can be produced in the laboratory or can come from natural sources (e.g., shark cartilage). Some studies suggest that if chondroitin is available to the cell matrix, synthesis of tissue can occur. For this reason, it is used to treat arthritis. Although there is little information on chondroitin’s long-term effects, it is generally not considered to be harmful.

Glucosamine theoretically provides a building block for regeneration of damaged cartilage. The absorption of oral glucosamine is 90% to 98%, making it widely accepted for use. Glucosamine is generally well tolerated, and no adverse reactions have been reported with its use (DerMarderosian, 2003).