3.  A 46-year-old male presents with an ulcer on the hard palate. A biopsy reveals necrosis of salivary gland parenchyma, chronic inflammation, and foci of squamous epithelium admixed with mucous acini. Squamous cells exhibit nuclear pleomorphism and mitotic activity. The lesion displays a lobular architecture, as demonstrated in this picture. Which of the following is the most likely diagnosis? 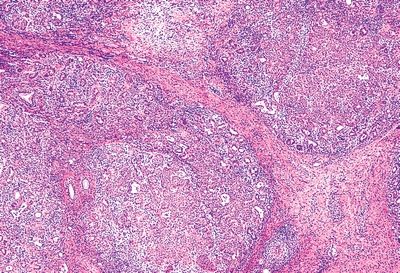 4.  A 40-year-old man presents with 1-year history of swelling of the right submandibular gland. On palpation, a slightly tender, very firm mass is appreciated. Fearing a malignancy, the submandibular gland is removed, and the lesion has the histologic features shown in this picture. Which of the following is the most likely diagnosis? 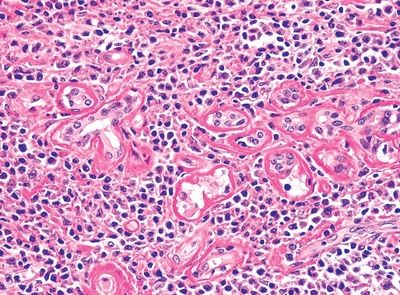 5.  A 40-year-old woman presents with enlargement of the left parotid gland and dryness of the eyes and mouth. A biopsy of the parotid and minor salivary glands shows the histologic changes represented in this picture. Laboratory studies reveal high titers of circulating antibodies to ribonucleoproteins (RNP), including SS-A (Ro) and SS-B (La). This patient has an increased risk of developing which type of lymphoma? 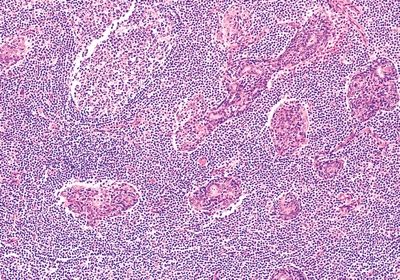 6.  A well-demarcated slowly growing 4-cm tumor is resected from the left parotid gland of a 45-year-old female patient. Its cut surface is variegated, with myxoid and blue-gray areas. The microscopic appearance of the tumor is demonstrated in this picture. If properly resected, the recurrence rate of this tumor is: 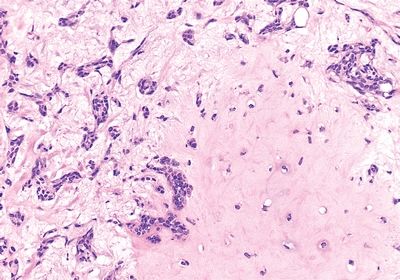 7.  A 60-year-old man presents with bilateral painless swelling of the parotid gland. Image studies reveal a 1.5-cm mass in the right parotid and a 2.0-cm mass in the left parotid. Both tumors are resected and appear to have similar microscopic appearance, which is shown in this picture. Which of the following is the strongest predisposing condition for the development of this tumor? 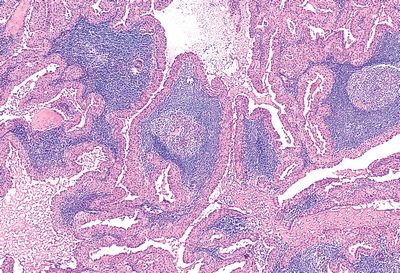 8.  This picture demonstrates the typical microscopic features of a well-circumscribed, encapsulated mass removed from the parotid of a 65-year-old woman. Which of the following subtypes has a 25% recurrence rate? 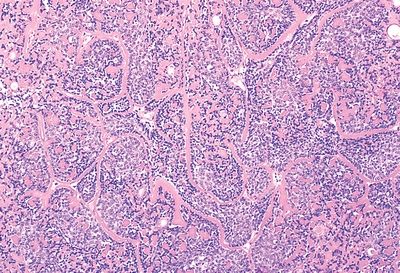 9.  The most common location of the salivary gland tumor depicted in this photomicrograph is: 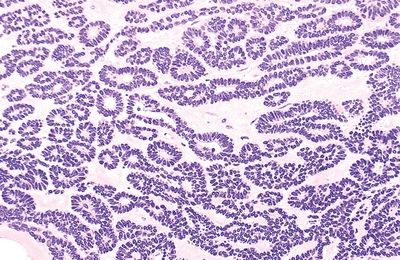 10.  The tumor shown in this photomicrograph was removed from the parotid gland of a 38-year-old woman. Which of the following is the most important risk factor for this neoplasm? 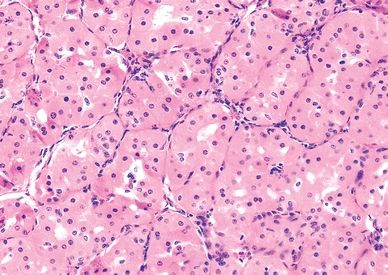 11.  Of the five salivary gland neoplasms shown in these photomicrographs, which one is always found in the parotid and periparotid region? 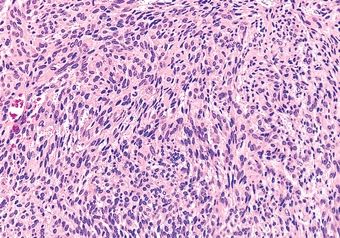 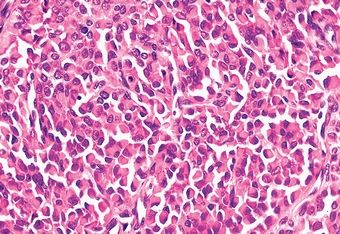 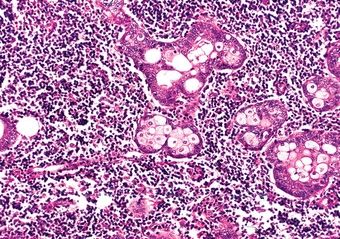 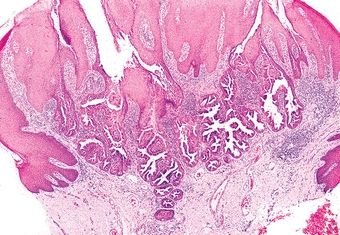 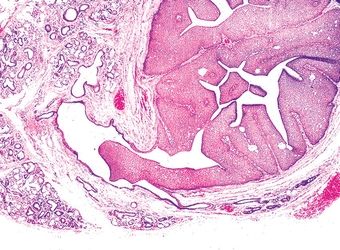 12.  The salivary gland tumor in this picture is characterized by: 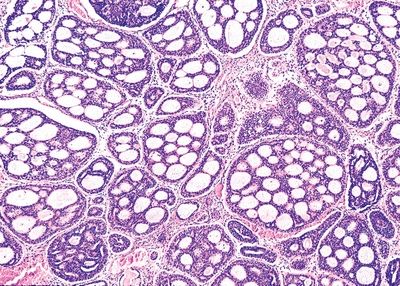 A.  Association with Sjögren syndrome

B.  Cytoplasm packed with mitochondria