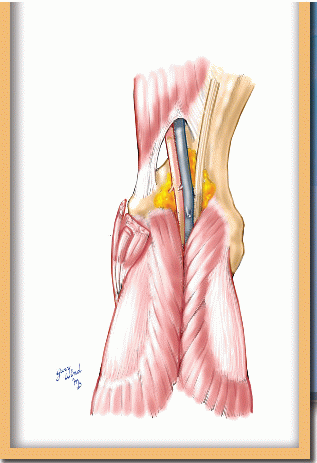 Popliteal Artery
Surgical Anatomy of the Popliteal Vessels
The popliteal artery is a short but vital segment of the major arterial conduit of the leg situated between the adductor hiatus and the lower border of the popliteus muscle posterior to the knee joint (Fig. 17-1).

Because the relationships of the adjoining segments of artery and the muscle groups attaching around the knee are vital to understanding the approaches to the popliteal artery, they are included as an integral part of the following anatomic description.
Fasciae
Beneath skin and superficial fascia, the lower extremity is wrapped in an aponeurotic girdle of varying thickness known as the fascia lata (Fig. 17-2). It is particularly thick along the iliotibial band of the lateral thigh and around the knee joint, where it serves as a retinaculum holding the hamstring tendons and the origins of the gastrocnemius muscle snugly around the popliteal neurovascular bundle.


Two prominent septa connecting the fascia lata to the supracondylar lines of the femur divide the quadriceps muscle of the thigh from the adductor muscles medially and from the hamstring muscles
posteriorly. These septa are closely applied to the vastus medialis and vastus lateralis muscles near the femur. There is an additional sling of fascia bridging the cleft between the vastus medialis and adductor muscles. The sartorius muscle lies superficial to this sling, and the superficial femoral vessels occupy the cleft beneath the sling. This passage is known as the adductor canal (Hunter’s canal).

Muscle Groups Attaching at the Knee
The bulky quadriceps muscles of the anterior thigh insert into the superior aspect of the patella (Fig. 17-3). The wedge-shaped adductor group fans out from its origins on the inferior pubic ramus to the medial edge of the linea aspera, medial supracondylar ridge, and adductor tubercle of the femur.
Several centimeters above the adductor tubercle, the tendon of the adductor magnus splits to form the adductor hiatus through which the superficial femoral artery and vein pass to become the popliteal vessels.
The hamstring muscles of the posterior thigh originate at the ischial tuberosity and separate into the medial semimembranosus and semitendinosus and the lateral biceps femoris muscles (Fig. 17-4). The deep head of the biceps muscle originates from the lower third of the lateral lip of the linea aspera and joins the superficial head to insert on the head of the fibula. The semimembranosus muscle inserts into the posterior lip of the medial tibial condyle. The semitendinosus muscle, along with the gracilis and sartorius muscles, insert on the anterior aspect of the medial tibial condyle.

The tibial and peroneal nerves lie between the hamstring and the adductor magnus muscles. The peroneal nerve spirals around the biceps insertion to reach the lateral aspect of the leg, and the tibial nerve descends to the popliteal space where it is loosely associated with the popliteal artery and vein.
The gastrocnemius muscle’s origins from the medial and lateral supracondylar flare of the femur interdigitate with the insertions of the hamstring muscles (Fig. 17-5). The confluence of these two sets of muscle attachments results in the deep, diamond-shaped popliteal fossa.

The popliteal vessels are enclosed in a firm connective tissue sheath to which the tibial nerve is loosely attached (Fig. 17-7). This sheath is separated from the supracondylar hollow of the popliteal fossa by a small fat pad that facilitates surgical mobilization.

In addition to the muscular branches, the popliteal artery gives rise to several vessels surrounding and supplying the knee joint (Fig. 17-9).
This network is linked with important collateral channels. It consists of paired superior and inferior genicular arteries and a middle genicular artery.

The short distal segment of the popliteal artery lies between the heads of the gastrocnemius and popliteus muscles (Fig. 17-8). There are no major branches from this segment, and it is approachable from both the medial and lateral sides of the leg. The popliteal artery disappears through a hiatus in the origin of the soleus muscle.
The path of the popliteal vessels behind the knee can be visualized by dividing and reflecting the posteromedial thigh muscles and the medial head of the gastrocnemius muscle (Fig. 17-10).

Surgical Approaches to the Popliteal Artery
The various options for surgical access to the popliteal artery can be considered in terms of three anatomic sections (Fig. 17-1): suprageniculate, infrageniculate, and midpopliteal. The suprageniculate and infrageniculate sections are used in bypassing obstructions of more proximal vessels, usually the superficial femoral artery. Access to these sections of the popliteal artery is usually gained through medial incisions, although lateral approaches have been described (Fig. 17-11). A direct posterior approach is used to expose the midpopliteal section. This classic approach has virtually been abandoned for use in bypass surgery, but it is ideal for surgery involving correction of intrinsic pathology of the midpopliteal artery, such as entrapment, cystic adventitial disease, and localized aneurysms or intimal flaps.


Exposure of the Suprageniculate Popliteal Artery
This section of the popliteal artery is the preferred position for the distal anastomosis of a femoropopliteal bypass, providing that the arterial tree below this level is devoid of flow-limiting stenoses. Surgeons generally favor autogenous tissue, such as the saphenous vein, for the bypass graft. The use of synthetic graft material for bypasses to the popliteal artery above the knee is also acceptable,1,2,3 but the ischemic consequences of a failed bypass are worse with prosthetic graft than with autogenous vein.4
The suprageniculate popliteal artery is most easily approached through a medial incision. Veith et al.5 popularized a lateral approach to the suprageniculate popliteal artery for patients who are undergoing secondary vascular operations, when infection or surgical scarring render the medial approach inconvenient.
Technique of Medial Suprageniculate Exposure
The patient is placed in the supine position with the leg externally rotated and the knee flexed 30° (Fig. 17-12). The entire leg should be shaved and prepped to facilitate movement during the dissection and to ensure that other areas are available for dissection should the popliteal artery prove inadequate. An incision is made in the distal third of the medial thigh along the anterior border of the sartorius muscle.

Tags: Anatomic Exposures in Vascular Surgery
May 22, 2016 | Posted by drzezo in ANATOMY | Comments Off on Popliteal Artery
Premium Wordpress Themes by UFO Themes
WordPress theme by UFO themes
%d bloggers like this: