17.1 Branches of the Aorta Abdominalis: Overview and Paired Branches 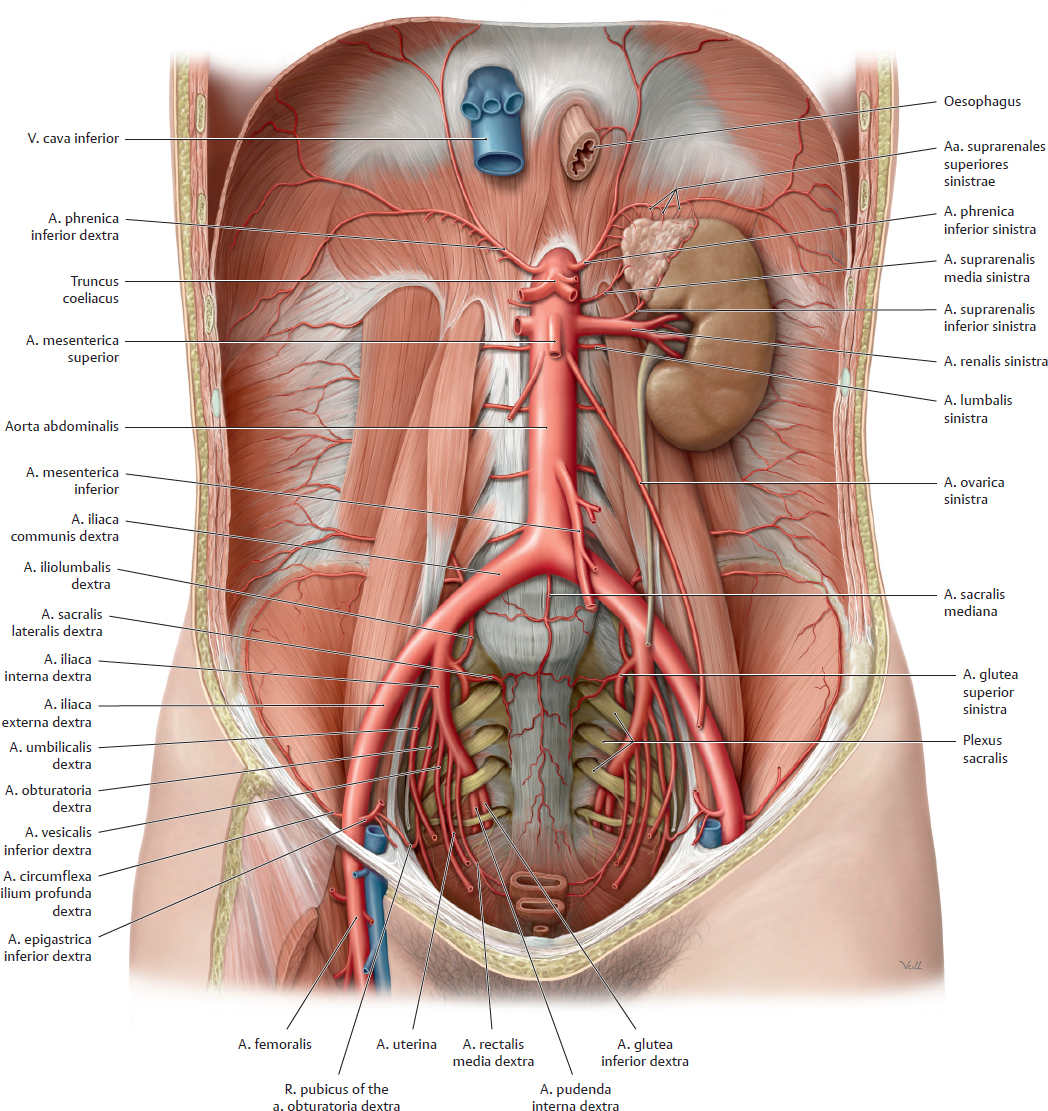 Anterior view (female pelvis). The oesophagus has been pulled slightly inferiorly, and the peritoneum has been completely removed.

The aorta abdominalis is the distal continuation of the aorta thoracica. It descends slightly to the left of the midline to approximately the level of the L 4 vertebra, as shown in B (or possibly to the L 5 vertebra in older individuals). There it divides into the paired aa. iliacae communes (bifurcatio aortae). The aa. iliacae communes divide further into the aa. iliacae internae and externae. The aorta abdominalis (see C) and its major branches give origin to various “subbranches” that supply the abdomen and pelvis (see D). 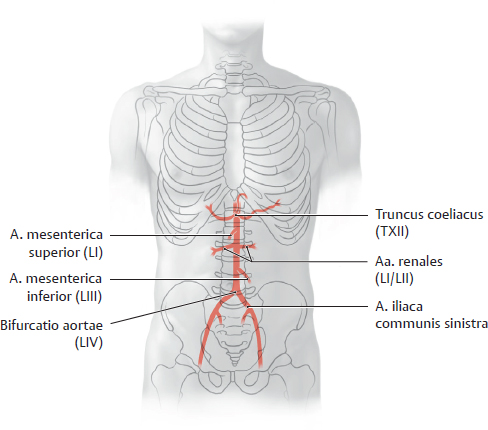 Anterior view of the five major arterial trunks. The major branches of the aorta abdominalis can be identified in imaging studies based on their relationship to the vertebrae. 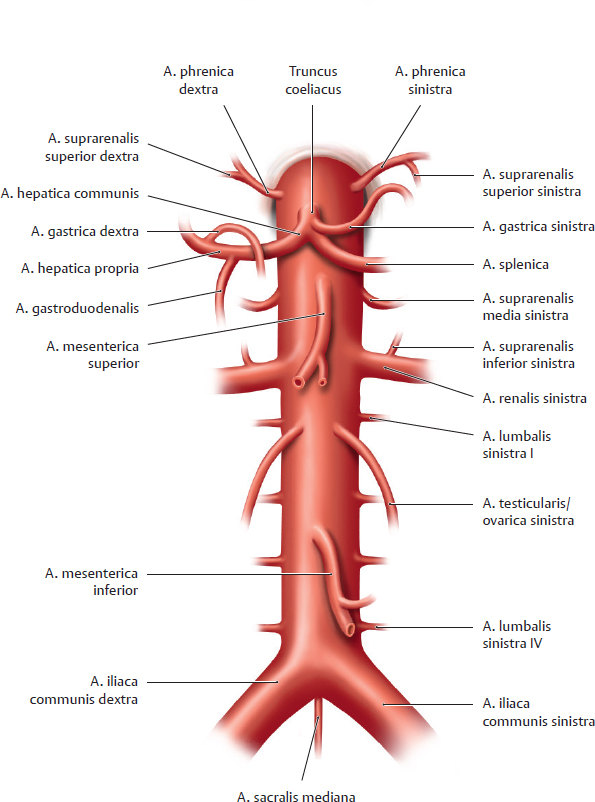 C Sequence of branches from the aorta abdominalis

D Functional groups of arteries that supply the abdomen and pelvis

The branches of the aorta abdominalis and pelvic arteries can be divided into five broad functional groups (→ = give rise to). For details about the areas supplied by the unpaired branches see p. 205.

17.2 Branches of the Aorta Abdominalis: Unpaired and Indirect Paired Branches 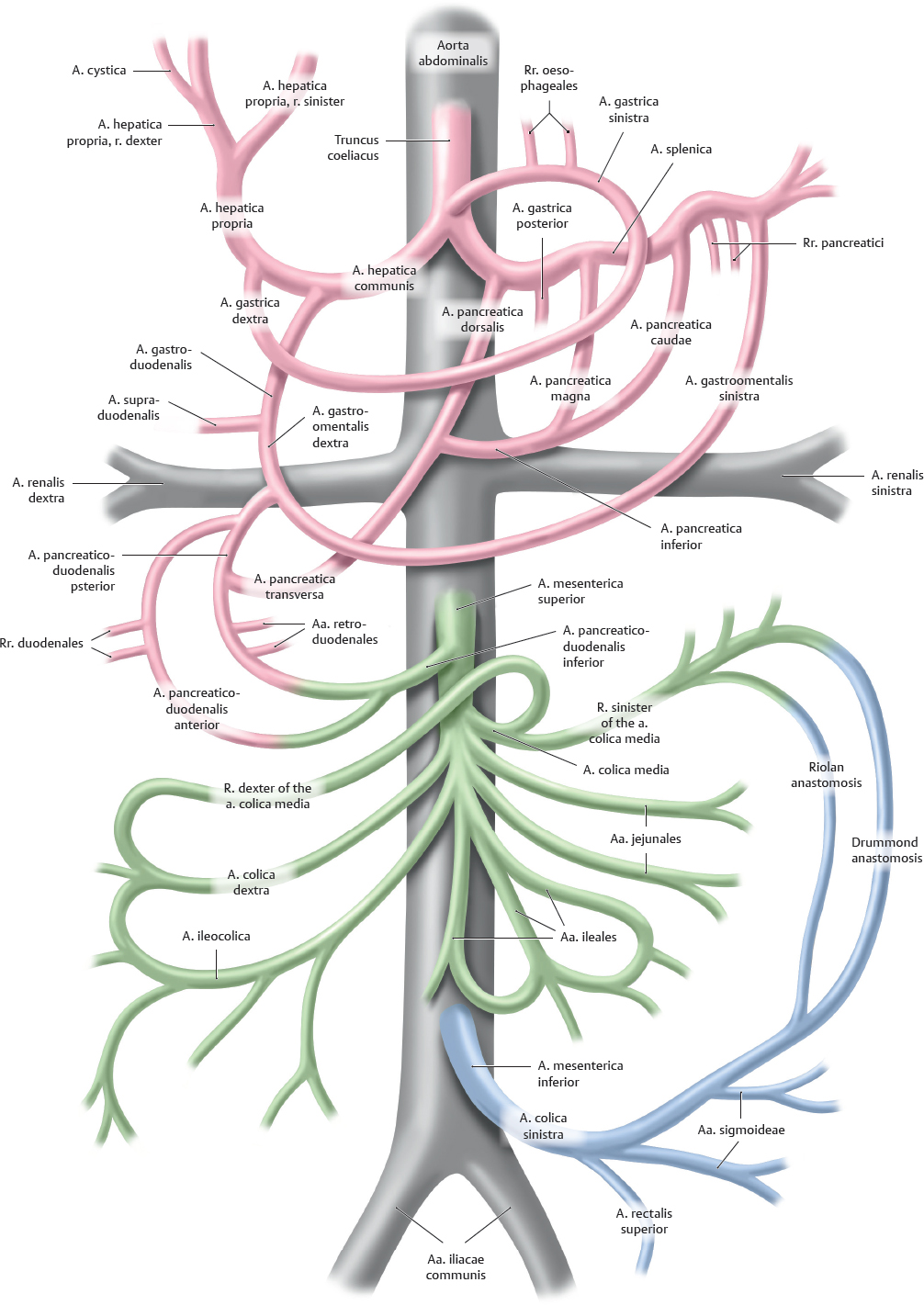 A Classification of arteries supplying the abdomen and pelvis 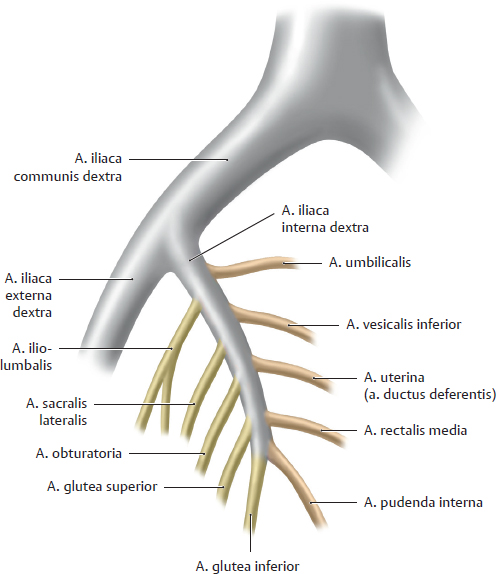 The bifurcatio aortae is the point where the aorta abdominalis bifurcates into the two aa. iliacae communes, which give off multiple sub-branches that supply the viscera and pelvic walls (see D). 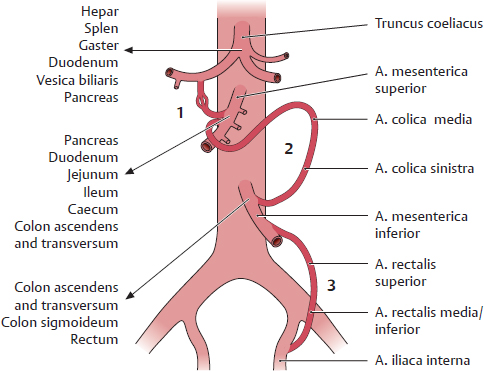 2 Between the aa. mesentericae superior and inferior (aa. colicae media and sinistra; Riolan and Drummond anastomoses, see A)

These anastomoses are important in that they can function as collaterals, delivering blood to intestinal areas that have been deprived of their normal blood supply.

D Classification of the arteries supplying the abdomen and pelvis

The branches of the pars abdominalis aortae and the pelvic arteries can be divided into the five major areas they supply. For details about the area supplied by the paired branches see p. 203.

Note the anastomoses particularly between the unpaired trunks (see Fig. A and C). 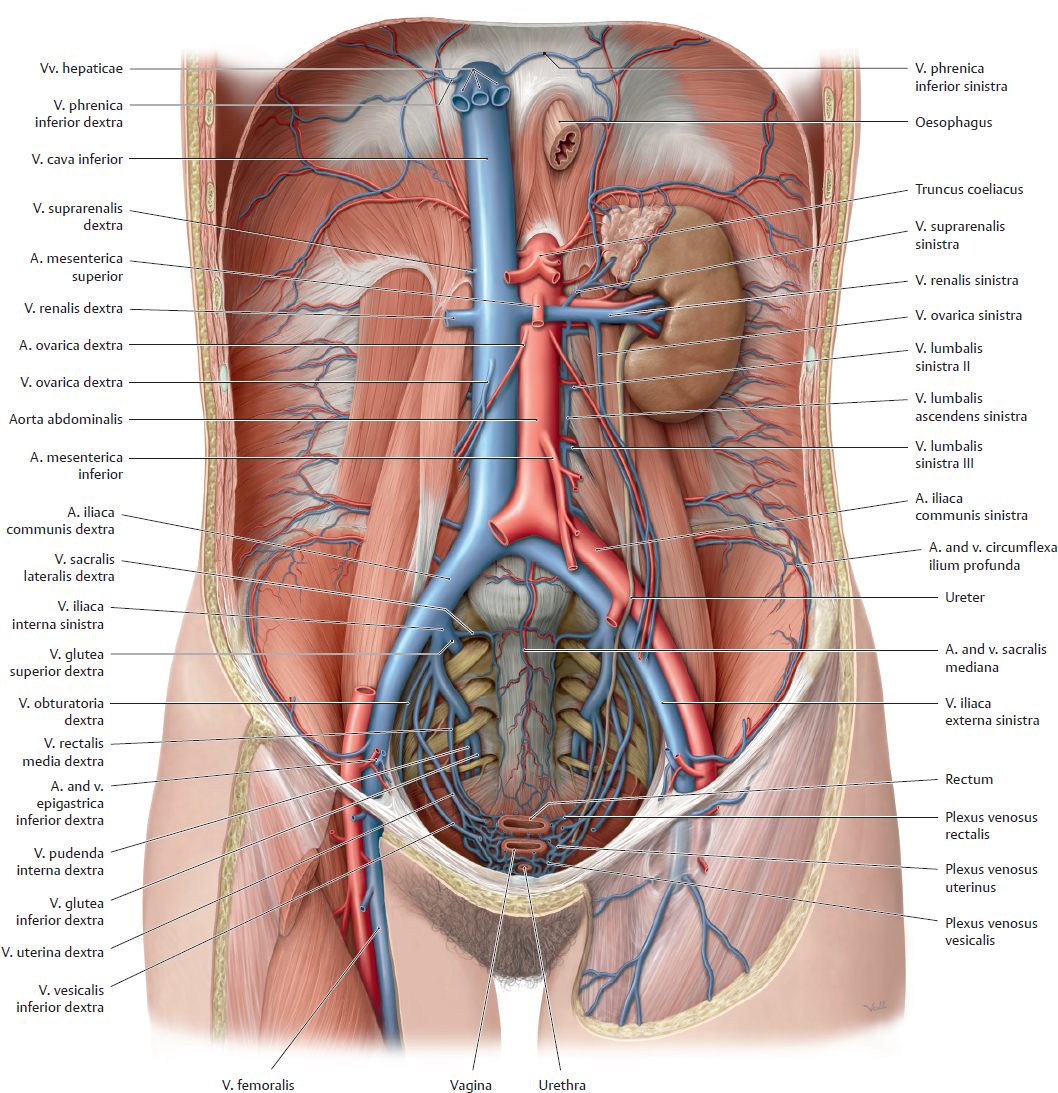 Anterior view of an opened female abdomen. All organs but the left ren and gl. suprarenalis have been removed, and the oesophagus has been pulled slightly inferiorly.

The v. cava inferior receives numerous tributaries that return venous blood from the abdomen and pelvis (and, of course, from the lower limbs), analogous to the distribution of the paired abdominal aortic branches in this region. The v. cava inferior is formed by the union of the two vv. iliacae communes at the approximate level of the L 5 vertebra (see C), behind and slightly inferior to the bifurcatio aortae.

Note the special location of the left v. renalis and its risk of compression by the a. mesenterica superior (see p. 261): The left v. renalis passes in front of the aorta abdominalis but behind the a. mesenterica superior. Veins in the male pelvis are described on p. 339. The veins in the pelvis have numerous variants. For example, the tributaries of the v. iliaca interna are frequently multiple (unlike those shown above) but unite to form a single trunk before entering the v. iliaca (see also p. 341). 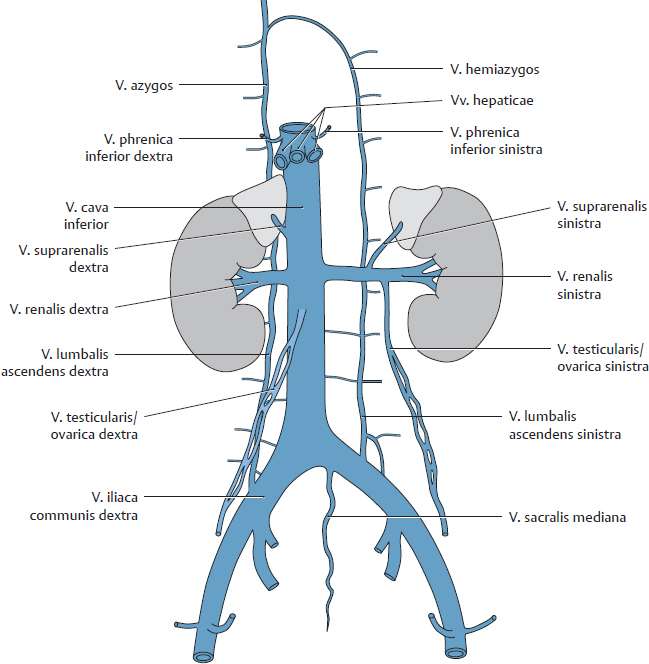 B Tributaries of the vena cava inferior

The difference in the venous drainage of the right and left renes is displayed more clearly here than in A. The continuity of the right v. lumbalis ascendens with the v. azygos is also shown.

Note: Venous blood from the v. cava inferior may drain through the vv. lumbales ascendentes into the v. azygos or hemiazygos and thence to the v. cava superior. Thus a connection between the two vv. cavae exists on the posterior wall of the abdomen and thorax: a cavocaval or intercaval anastomosis. The location and significance of cavocaval anastomoses are discussed on p. 210. Frequently an anastomosis exists between the v. suprarenalis and v. phrenica inferior (not shown here, see A) on the left side of the body. 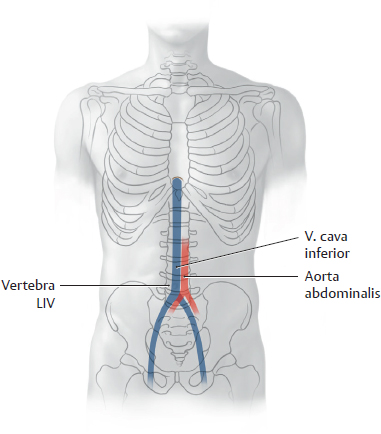 C Projection of the vena cava inferior onto the columna vertebralis

The v. cava inferior ascends on the right side of the aorta abdominalis and pierces the diaphragma at the foramen venae cavae located at the T 8 level. The vv. iliacae communes unite at the L 5 level to form the v. cava inferior (see also A). 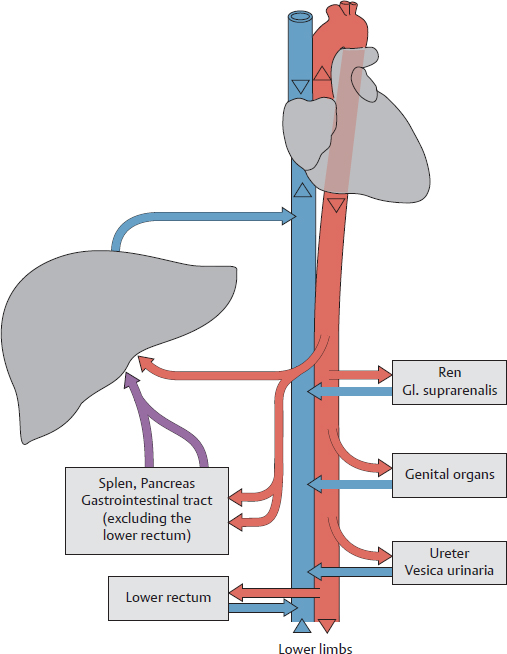 A The portal venous system in the abdomen

1. Organ veins that drain directly or indirectly (via the vv. iliacae) into the v. cava inferior, which then returns the blood to the right heart (see also p. 206);

2. Organ veins that first drain directly or indirectly (via the vv. mesentericae or v. splenica) into the v. portae hepatis—and thus to the hepar—before the blood enters the v. cava inferior and returns to the right cor.

The first pathway serves the urinary organs, gll. suprarenales, genital organs, and the walls of the abdomen and pelvis. The second pathway serves the organs of the digestive system (hollow organs of the gastrointestinal tract, pancreas, vesica biliaris) and the splen (see D). Only the lower portions of the rectum are exempt from this pathway and drain directly through the vv. iliacae to the v. cava inferior. This (re) routing of venous blood through the hepatic portal system ensures that the organs of the digestive tract deliver their nutrient-rich blood to the hepar for metabolic processing before it is returned to the cor. It also provides a route by which elements of degenerated red blood cells can be conveyed from the splen to the hepar. Thus, the v. portae hepatis functions to deliver blood to the hepar to support metabolism. This contrasts with the a. hepatica propria, which supplies the hepar with oxygen and other nutrients. Anastomoses may develop between the portal venous system and vena caval system (portacaval anastomosis) and function as collateral pathways in certain diseases (see p. 210). 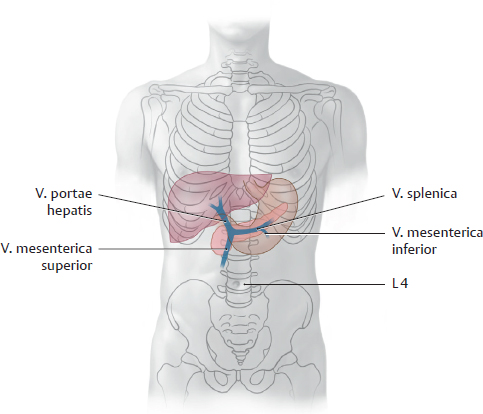