2.  A 40-year-old man presents with destructive ulcerative lesions of the nasal and nasopharyngeal cavities. Biopsies show extensive chronic inflammatory infiltrates, mostly consisting of foamy macrophages and plasma cells, as shown in this picture. A Steiner stain identifies small rods within macrophages. Which of the following is the most likely diagnosis? 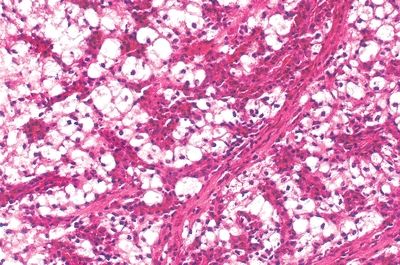 B.  Complication of chronic cocaine abuse

4.  A 35-year-old male undergoes resection of a nasal polyp, which reveals the histologic features shown in this picture. Which of the following is most likely to be associated with this kind of polyp? 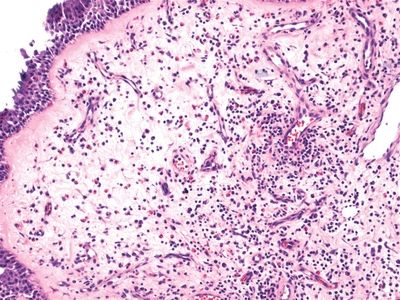 A.  Asthmatic attacks on aspirin ingestion

E.  Origin in the maxillary antrum

5.  A 35-year-old man presents with unilateral nasal obstruction. Inspection reveals an exophytic growth filling the right nasal fossa. The lesion is removed. Its microscopic appearance is shown in this picture. Which of the following is true about this polyp? 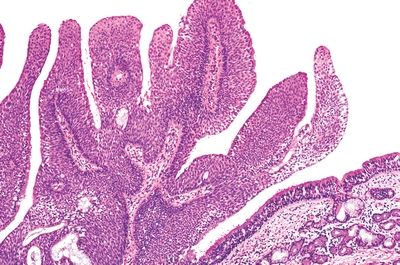 A.  Associated with Epstein-Barr virus (EBV)

B.  Associated with human papillomavirus (HPV)

E.  Develops in the vestibule

6.  This photomicrograph shows a papilloma removed from the nasal fossa of a 50-year-old man who presented with epistaxis. Which of the following is true about this lesion? 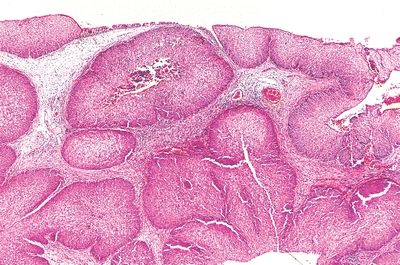 A.  Develops from the lateral nasal wall.

B.  HPV is found in the majority of cases.

C.  Not associated with risk of invasive carcinoma.

7.  Which type of papilloma is the one shown in this photomicrograph? 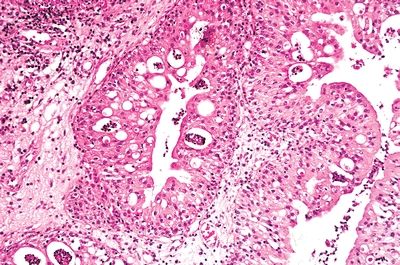 8.  A 58-year-old male with history of chronic rhinosinusitis undergoes resection of a polypoid lesion growing in the posterior nasal septum. The microscopic appearance of the lesion is demonstrated in this low-power photomicrograph. On high power, the epithelium lining the glands resembles respiratory epithelium. Which of the following is the most likely diagnosis? 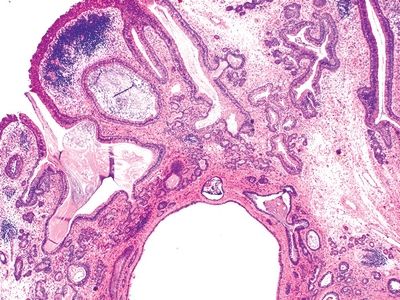 9.  A 65-year-old man undergoes resection of an infiltrative mass within the maxillary antrum. The microscopic features of the mass are shown in this picture. This type of neoplasm arising at this site is associated with: 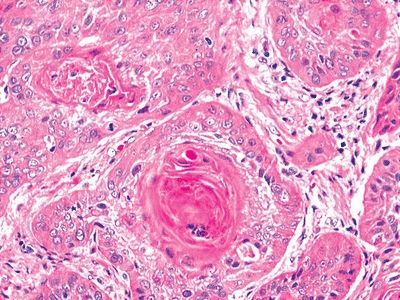 D.  Second primary in the head and neck

10.  A 14-year-old boy undergoes biopsy of a nasopharyngeal lesion near the eustachian tube opening. The microscopic appearance of the lesion is shown in this picture. Which of the following is the most likely diagnosis? 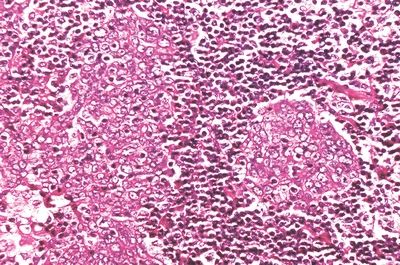 11.  A midline sinonasal tumor from a 25-year-old woman consists of sheets of poorly cohesive cells with scanty cytoplasm and uniform nuclei with prominent nucleoli, as shown in picture A. Mitotic figures and apoptotic bodies are numerous. Scattered throughout the tumor are foci of abrupt keratinization, as demonstrated in picture B. This tumor is most likely to express: 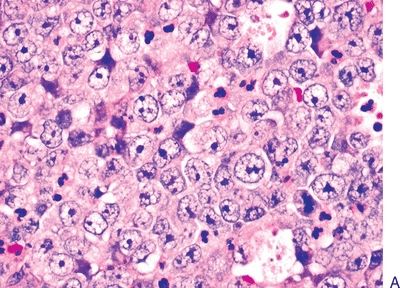 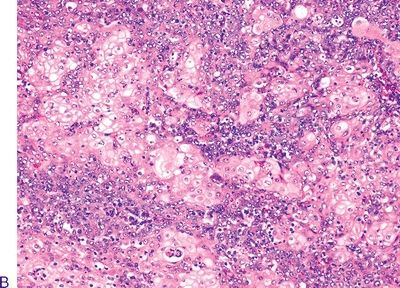