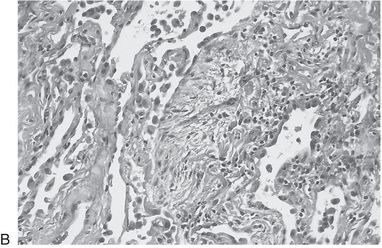 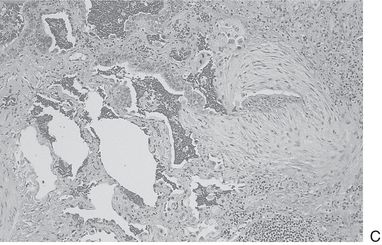 A.  Centriacinar emphysema with chronic bronchitis

3.  Extrinsic allergic alveolitis (also called hypersensitivity pneumonitis) is a reaction to long-term exposure to various antigens of animal or plant origin. The inflammatory infiltrate present in the lung is predominantly composed of:

B.  Eosinophils and neutrophils

A.  Allergens of plant origin

5.  An adult patient presents with a chest x-ray picture of bilateral areas of diffuse consolidation. Biopsies of involved areas demonstrate multiple necrotizing granulomas in close proximity to small bronchi. Bronchial spaces are filled with mucus, neutrophils, and eosinophils. No histologic evidence of arteritis is seen. Peripheral eosinophilia is mild, and antineutrophil cytoplasmic antibodies (ANCA) are undetectable. Which of the following is the most likely diagnosis?

6.  Which of the following histopathologic findings is considered most characteristic of bronchiolitis obliterans–organizing pneumonia?

7.  A lymphoma originating from BALT (bronchial-associated lymphoid tissue) is usually:

A.  An aggressive high-grade lymphoma

B.  Associated with lymphatic tracking

D.  Not associated with lymphoepithelial lesions

8.  The entity known as lymphomatoid granulomatosis is a/an:

A.  Infectious condition due to mycobacteria

9.  A 20-year-old man undergoes surgery for resection of a well-circumscribed mass in the right lung. Histologically, it is composed of spindle cells arranged in fascicles variably admixed with a plasma cell population. The spindle cells react with antibodies to vimentin and actin and are negative for CD68. The plasma cell component is polyclonal as evaluated by light chain immunohistochemistry. The diagnosis most compatible with these features is:

10.  A 13-year-old child presents with recurrent hemoptysis and iron deficiency anemia. Granular perihilar infiltrates are present on chest x-rays. Which of the following histologic findings supports a diagnosis of idiopathic hemosiderosis instead of Goodpasture syndrome?

A.  Absence of IgG deposition along basement membranes

B.  Accumulation of hemosiderin-laden macrophages

11.  A 35-year-old woman manifests increasingly severe respiratory distress and chest pain. Cardiac catheterization leads to a clinical diagnosis of pulmonary hypertension of unknown origin. In the earliest stages of this condition, an open lung biopsy would reveal predominantly:

12.  The condition known as lymphangiomyomatosis is seen exclusively in:

13.  Which of the following pulmonary conditions is due to the accumulation of surfactant apoprotein within alveoli?

14.  The illustrated lesion is most likely: 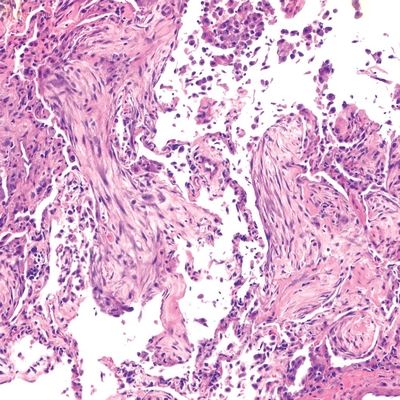 15.  The illustrated lesion is most likely: 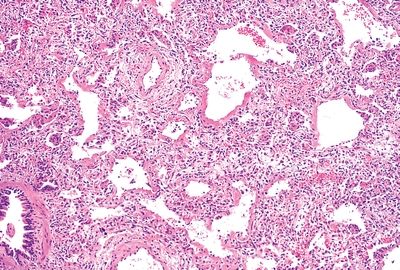 16.  The illustrated lesion is most likely: 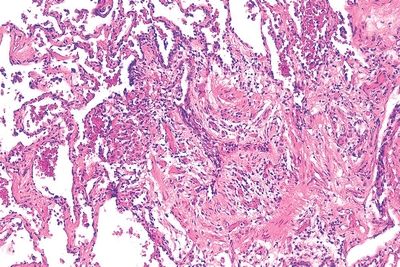 17.  The illustrated lesion is most likely: 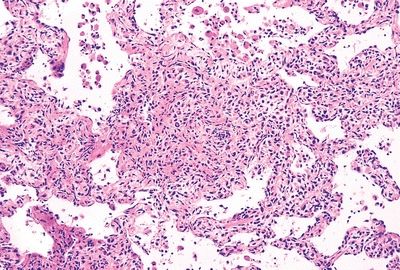 18.  The illustrated lesion is most likely: 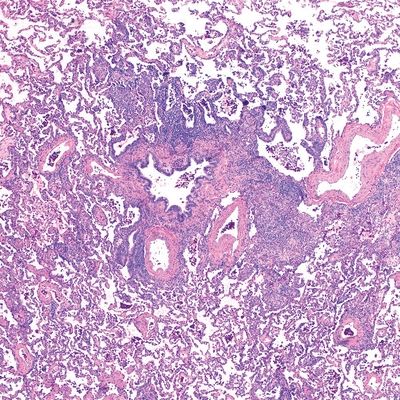 19.  The illustrated lesion is most likely: 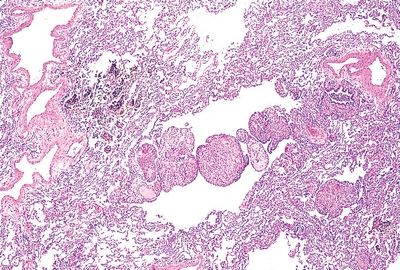