2.  According to the Batts-Ludwig system, the extent of hepatic inflammation and injury shown in this photomicrograph should be graded as: 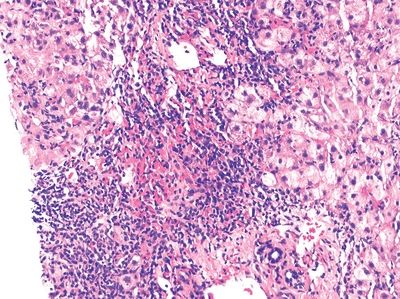 3.  This photomicrograph shows a section of liver immunostained with an antibody to CD34. Which of the following pathologic reactions is demonstrated by this immunostain? 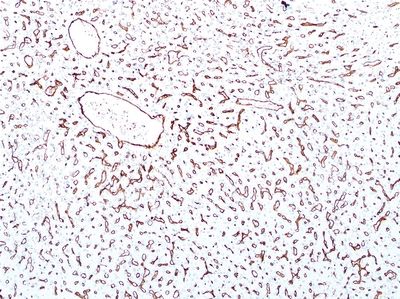 A.  Activation of Kupffer cells

D.  Deposition of elastin in the space of Disse

4.  According to the Batts-Ludwig system, the stage of liver fibrosis seen in this photomicrograph is: 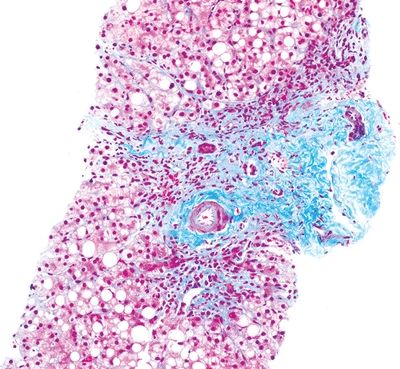 5.  A 30-year-old woman is found to have laboratory evidence of acute hepatitis. A liver biopsy shows the changes highlighted in this photomicrograph. Which of the following is the most likely diagnosis? 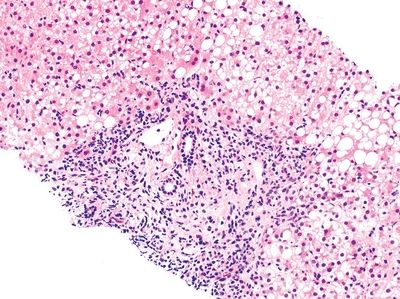 6.  A patient with laboratory evidence of liver dysfunction has a history of chronic intake of anabolic steroids. Which of the following patterns of liver injury would be expected?

7.  An otherwise healthy 12-year-old girl is given erythromycin for an acute ear infection. Two days after starting the treatment, she begins to experience generalized pruritus, followed by jaundice and dark urine. Laboratory tests reveal hyperbilirubinemia and elevation of AST, ALT, and alkaline phosphatase. Which of the following is the most likely cause of this patient’s presentation?

8.  Which of the following histopathologic features is usually absent or minimal in the so-called toxic pattern of acute hepatitis?

9.  Which of the following patterns of acute hepatitis would be favored by the finding of sinusoidal pigmented macrophages clustered around central veins?

10.  A young woman with chronic liver dysfunction undergoes a liver biopsy. This shows mild to moderate periportal inflammation, single-hepatocyte necrosis, and periportal fibrosis. There is a mixed portal infiltrate containing abundant plasma cells. Laboratory investigations demonstrate mild elevation of AST and ALT, circulating anti-smooth muscle antibodies (SMA), and hypergammaglobulinemia (IgG 1.6 times normal values). She is negative for anti-HCV antibodies. Which of the following is the most likely diagnosis?

11.  A 35-year-old man with history of intravenous drug abuse (IVDA) undergoes a liver biopsy for evaluation of chronic hepatitis. A key histologic finding is demonstrated in this picture. Which of the following is the most likely etiologic agent? 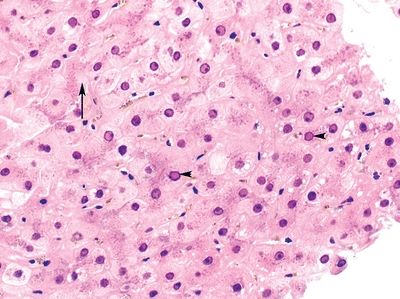 12.  A patient with history of hemophilia A and repeated blood transfusions develops chronic hepatitis. Which of the following viruses is the most common cause of chronic hepatitis in this clinical setting?

A.  Hepatitis A virus

B.  Hepatitis B virus

13.  A liver biopsy from a 50-year-old man with type 2 diabetes reveals the following changes: extensive macrovesicular steatosis involving approximately 50% of the tissue, more pronounced in the centrilobular region; mild chronic inflammation within the lobule; ballooning change of hepatocytes; and pericellular fibrosis in the centrilobular region. Occasional Mallory bodies are found. There are small clusters of neutrophils surrounding ballooned hepatocytes. There is no evidence of cholestasis. This histopathologic picture is most consistent with:

14.  Which of the following biliary diseases is associated with a morphologic pattern of injury referred to as ductular reaction (ductular proliferation)?

A.  Autoimmune injury to bile ducts

B.  Infiltrative diseases such as lymphoma and sarcoidosis

15.  Which of the following immunohistochemical markers is most useful to detect early stages of biliary disease and distinguish it from hepatic disease?

16.  A 50-year-old woman undergoes a liver biopsy because of persistent pruritus, jaundice, and elevated liver enzymes. The biopsy reveals chronic hepatitis characterized by lymphohistiocytic infiltration around small bile ducts, degeneration of ductules, and specific lesions such as the one in this photomicrograph. Piecemeal necrosis is also present. Rhodanine staining demonstrates copper accumulation in periportal hepatocytes. Which of the following is the finding most likely associated with this condition? 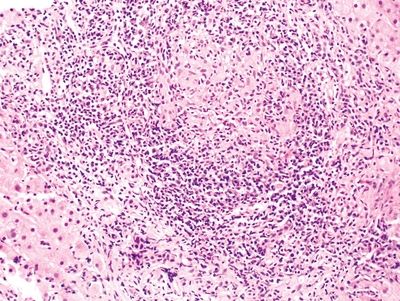 D.  Iron accumulation in the pancreas and myocardium

17.  A 25-year-old male undergoes clinical and pathologic investigations because of progressive jaundice and elevated liver enzymes. Endoscopic retrograde cholangiopancreatography demonstrates alternating segments of stenosis and dilatation of extrahepatic biliary tree. Which of the following conditions is most commonly associated with this liver disease?

18.  A liver biopsy from a 2-month-old infant with cholestatic jaundice reveals prominent small bile duct proliferation, bile plugs, portal edema, and scattered hepatic giant cells. The lobular architecture is preserved. Which of the following is the most likely cause of these changes?

A.  Caused by congenital absence of bile ducts

B.  Commonly associated with patency of ducts at porta hepatis

20.  A diagnosis of bile duct paucity is primarily based on the finding of:

A.  Ductular proliferation and portal edema