5.  A patient with history of common variable immunodeficiency presents with chronic diarrhea, malabsorption, and recurrent Giardia infection. Which of the following findings is likely to be found in a small intestinal biopsy from this patient?

B.  Infiltration by eosinophils

6.  A 35-year-old HIV-negative man presents with malabsorption syndrome and lymphadenopathy. A jejunal biopsy reveals diffuse infiltration of the lamina propria by macrophages whose cytoplasm is filled with PAS-positive granular material, as shown in this photomicrograph. Which of the following is the most likely pathogen in this condition? 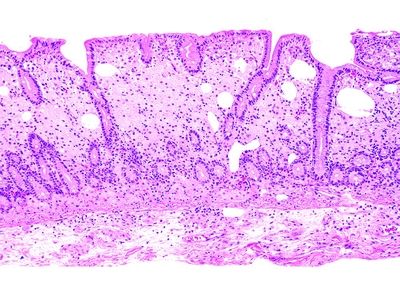 7.  A duodenal biopsy from a patient suffering from intermittent diarrhea and malabsorption is shown in this high-power photomicrograph of an H&E-stained section. Which of the following is the most likely diagnosis? 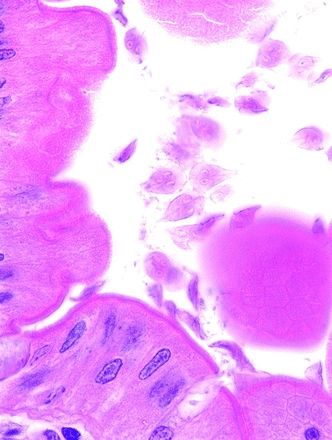 8.  This photomicrograph of a colonic biopsy shows histologic changes most consistent with: 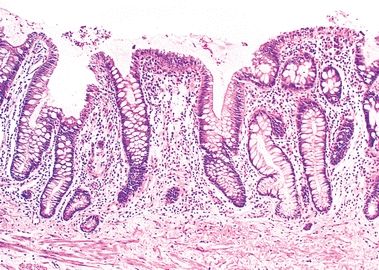 9.  Which of the following histologic changes indicates the presence of active colitis?

A.  Chronic inflammatory infiltrate in the lamina propria

B.  Crypt distortion and branching

D.  Neutrophils in the lamina propria

E.  Plasmacytosis in the lower mucosa

10.  A colonic biopsy shows the histologic changes highlighted in this picture, which is from a patient suspected to have inflammatory bowel disease. Does this finding favor a diagnosis of CD? 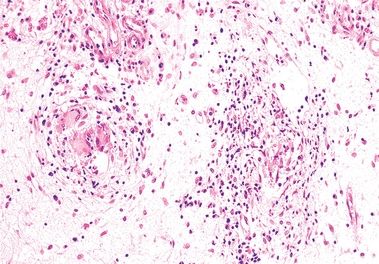 11.  The histologic changes in this picture are typically caused by: 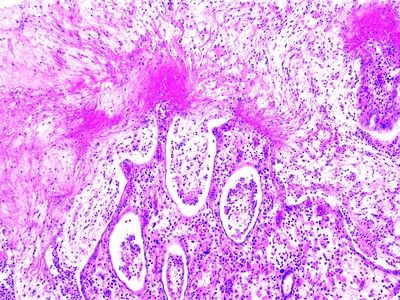 12.  A 59-year-old woman presents with intractable watery diarrhea of unknown etiology. All of the clinical and radiologic investigations reveal no abnormalities. Endoscopically, the colonic mucosa appears unremarkable. A colon biopsy shows increased inflammatory cells in the lamina propria and a thick hyaline membrane underneath the epithelial layer. Which of the following is the most likely diagnosis?

13.  A 32-year-old male presents with constipation and rectal bleeding. Clinical differential diagnosis includes Crohn disease, villous adenoma, and adenocarcinoma. Rectal biopsies reveal replacement of the lamina propria with fibrosis and smooth muscle, as shown in this picture. These features are most consistent with: 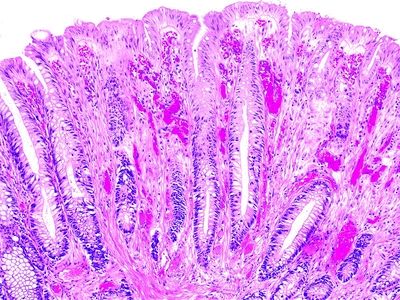 14.  A patient with AIDS develops intractable watery diarrhea. A jejunal biopsy shows round faintly basophilic 3-μm bodies attached to the luminal surface, as illustrated by this high-power picture. Which of the following mucosal changes would be expected? 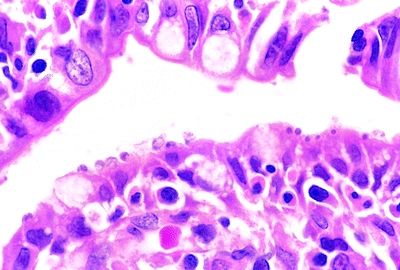 15.  An AIDS patient with intractable diarrhea undergoes a GI biopsy. Clusters of small dotlike structures are seen in a paranuclear location within epithelial cells of intestinal villi, as shown in this picture. These are gram positive but AFB negative. The most likely pathogen is: 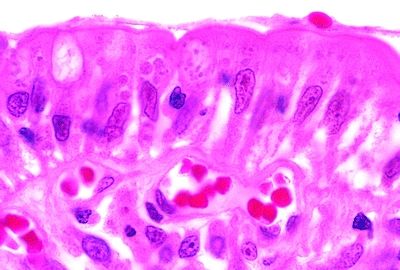 16.  Indeterminate colitis refers to a form of colitis that:

A.  Follows a chronic indolent course

B.  Has histologic features inconclusive for UC or CD

D.  Represents approximately 50% of all cases

17.  A colonic biopsy from an area of stricture located in the splenic flexure is examined histologically. Which of the following microscopic changes favors a diagnosis of ischemic bowel disease over inflammatory bowel disease?