Nitric oxide (NO) is a gaseous signaling molecule that readily diffuses across cell membranes and regulates a wide range of physiologic and pathophysiologic processes including cardiovascular, inflammatory, and neuronal functions. Nitric oxide should not be confused with nitrous oxide (N2O), an anesthetic gas; nor with nitrogen dioxide (NO2), a toxic pulmonary irritant gas.

Because NO is an environmental pollutant, the finding that NO is synthesized by cells and activates specific intracellular signaling pathways was unexpected. The first indication that NO is generated in cells came from studies of cultured macrophages, which showed that treatment with inflammatory mediators, such as bacterial endotoxin, resulted in the production of nitrate and nitrite, molecules that are byproducts of NO breakdown. Similarly, injection of endotoxin in animals elevated urinary nitrite and nitrate.

The second indication came from studies of vascular regulation. Several molecules, such as acetylcholine, were known to cause relaxation of blood vessels. This effect occurred only when the vessels were prepared so that the luminal endothelial cells covering the smooth muscle of the vessel wall were retained (see Figure 7-5). Subsequent studies showed that endothelial cells respond to these vasorelaxants by releasing a soluble endothelial-derived relaxing factor (EDRF). EDRF acts on vascular muscle to elicit relaxation. These findings prompted an intense search for the identity of EDRF.

At the same time, it was observed that administration of NO or organic nitrates, which are metabolized to NO, elicit a variety of effects including inhibition of platelet aggregation and vasorelaxation. Comparison of the biochemical and pharmacologic properties of EDRF and NO provided initial evidence that NO is the major bioactive component of EDRF. These findings also made it clear that exogenously applied NO and NO-releasing compounds (nitrates, nitrites, nitroprusside; see Chapters 11 and 12) elicit their effects by recruiting physiologic signaling pathways that normally mediate the actions of endogenously generated NO.

NO, written as NO• to indicate an unpaired electron in its chemical structure, or simply NO, is a highly reactive signaling molecule that is made by any of three closely related NO synthase (NOS, EC 1.14.13.49) isoenzymes, each of which is encoded by a separate gene and named for the initial cell type from which it was isolated (Table 19–1). These enzymes, neuronal NOS (nNOS or NOS-1), macrophage or inducible NOS (iNOS or NOS-2), and endothelial NOS (eNOS or NOS-3), despite their names, are each expressed in a wide variety of cell types, often with an overlapping distribution.

These NOS isoforms generate NO from the amino acid L-arginine in an O2– and NADPH-dependent reaction (Figure 19–1). This enzymatic reaction involves enzyme-bound cofactors, including heme, tetrahydrobiopterin, and flavin adenine dinucleotide (FAD). In the case of nNOS and eNOS, NO synthesis is triggered by agents and processes that increase cytosolic calcium concentrations. Cytosolic calcium forms complexes with calmodulin, an abundant calcium-binding protein, which then binds and activates eNOS and nNOS. On the other hand, iNOS is not regulated by calcium, but is constitutively active. In macrophages and several other cell types, inflammatory mediators induce the transcriptional activation of the iNOS gene, resulting in accumulation of iNOS and increased synthesis of NO. 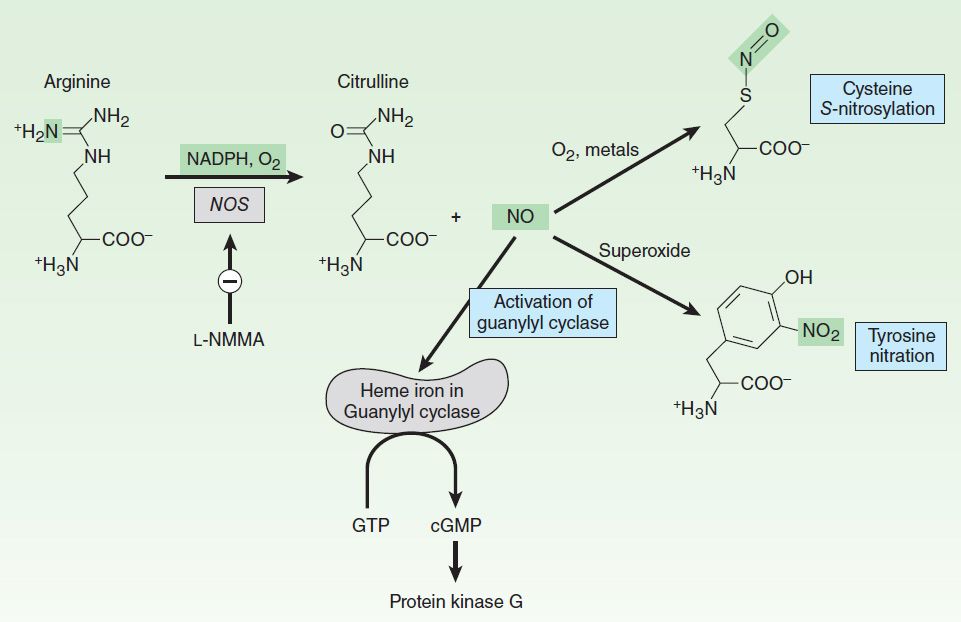 FIGURE 19–1 Synthesis and reactions of nitric oxide (NO). L-NMMA (see Table 19-3) inhibits nitric oxide synthase. NO binds to the iron in hemoproteins (eg, guanylyl cyclase), resulting in the activation of cyclic guanosine monophosphate (cGMP) synthesis and cGMP target proteins such as protein kinase G. Under conditions of oxidative stress, NO can react with superoxide to nitrate tyrosine. GTP, guanosine triphosphate.

NO mediates its effects by covalent modification of proteins. There are three major targets of NO (Figure 19–1):

1. Metalloproteins—NO interacts with metals, especially iron in heme. The major target of NO is soluble guanylyl cyclase (sGC), a heme-containing enzyme that generates cyclic guanosine monophosphate (cGMP) from guanosine triphosphate (GTP). NO binds to the heme in sGC, resulting in enzyme activation and elevation in intracellular cGMP levels. cGMP activates protein kinase G (PKG), which phosphorylates specific proteins. In blood vessels, NO-dependent elevations in cGMP and PKG activity result in the phosphorylation of proteins that lead to reduced cytosolic calcium levels and subsequently reduced contraction of vascular smooth muscle. Interaction of NO with other metallo-proteins mediates some of the cytotoxic effects of NO associated with NO overproduction, eg, by activated macrophages. For example, NO inhibits metalloproteins involved in cellular respiration, such as the citric acid cycle enzyme aconitase and the electron transport chain protein cytochrome oxidase. Inhibition of heme-containing cytochrome P450 enzymes by NO is a major pathogenic mechanism in inflammatory liver disease.

2. Thiols—NO reacts with thiols (compounds containing the –SH group) to form nitrosothiols. In proteins, the thiol moiety is found in the amino acid cysteine. This posttranslational modification, termed S-nitrosylation or S-nitrosation, requires either metals or O2 to catalyze the formation of the nitrosothiol adduct. S-nitrosylation is highly specific, with only certain cysteine residues in proteins becoming S-nitrosylated. S-nitrosylation can alter the function, stability, or localization of target proteins. Major targets of S-nitrosylation include H-ras, a regulator of cell proliferation that is activated by S-nitrosylation, and the metabolic enzyme glyceraldehyde-3-phosphate dehydrogenase, which is inhibited when it is S-nitrosylated. Denitrosylation of proteins is poorly understood but may involve enzymes, such as thioredoxin, or chemical reduction by intracellular reducing agents such as glutathione, an abundant intracellular sulfhydryl-containing compound. Glutathione can also be S-nitrosylated under physiologic conditions to generate S-nitrosoglutathione. S-nitrosoglutathione may serve as an endogenous stabilized form of NO or as a carrier of NO. Vascular glutathione is decreased in diabetes mellitus and atherosclerosis, and the resulting deficiency of S-nitrosoglutathione may account for the increased incidence of cardiovascular complications in these conditions.

3. Tyrosine nitration—NO undergoes both oxidative and reductive reactions, resulting in a variety of oxides of nitrogen that can nitrosylate thiols and add nitrate to tyrosines (described below) or are stable oxidation products (Table 19–2). NO reacts very efficiently with superoxide to form peroxynitrite (ONOO–), a highly reactive oxidant that leads to DNA damage, nitration of tyrosine, and oxidation of cysteine to disulfides or to various sulfur oxides (SOx