A 56-year-old man is admitted to the intensive care unit of a hospital for treatment of community-acquired pneumonia. He receives ceftriaxone and azithromycin upon admission, rapidly improves, and is transferred to a semiprivate ward room. On day 7 of his hospitalization, he develops copious diarrhea with eight bowel movements but is otherwise clinically stable. Clostridium difficile infection is confirmed by stool testing. What is an acceptable treatment for the patient’s diarrhea? The patient is transferred to a single-bed room. The housekeeping staff asks what product should be used to clean the patient’s old room. Why?

Metronidazole is a nitroimidazole antiprotozoal drug (see Chapter 52) that also has potent antibacterial activity against anaerobes, including Bacteroides and Clostridium species. Metronidazole is selectively absorbed by anaerobic bacteria and sensitive protozoa. Once taken up by anaerobes, it is nonenzymatically reduced by reacting with reduced ferredoxin. This reduction results in products that are toxic to anaerobic cells and allows for their selective accumulation in anaerobes. The metabolites of metronidazole are taken up into bacterial DNA, forming unstable molecules. This action only occurs when metronidazole is partially reduced, and, because this reduction usually happens only in anaerobic cells, it has relatively little effect on human cells or aerobic bacteria.

Metronidazole is well absorbed after oral administration, is widely distributed in tissues, and reaches serum levels of 4–6 mcg/mL after a 250 mg oral dose. It can also be given intravenously. The drug penetrates well into the cerebrospinal fluid and brain, reaching levels similar to those in serum. Metronidazole is metabolized in the liver and may accumulate in hepatic insufficiency.

Metronidazole is indicated for treatment of anaerobic or mixed intra-abdominal infections (in combination with other agents with activity against aerobic organisms), vaginitis (trichomonas infection, bacterial vaginosis), Clostridium difficile infection, and brain abscess. The typical dosage is 500 mg three times daily orally or intravenously (30 mg/kg/d). Vaginitis may respond to a single 2 g dose. A vaginal gel is available for topical use.

Adverse effects include nausea, diarrhea, stomatitis, and peripheral neuropathy with prolonged use. Metronidazole has a disulfiram-like effect, and patients should be instructed to avoid alcohol. Although teratogenic in some animals, metronidazole has not been associated with this effect in humans. Other properties of metronidazole are discussed in Chapter 52.

Mupirocin (pseudomonic acid) is a natural substance produced by Pseudomonas fluorescens. It is rapidly inactivated after absorption, and systemic levels are undetectable. It is available as an ointment for topical application.

Mupirocin is indicated for topical treatment of minor skin infections, such as impetigo (see Chapter 61). Topical application over large infected areas, such as decubitus ulcers or open surgical wounds, is an important factor leading to emergence of mupirocin-resistant strains and is not recommended. Mupirocin temporarily eliminates S aureus nasal carriage by patients or health care workers, but results are mixed with respect to its ability to prevent subsequent staphylococcal infection.

The polymyxins are a group of basic peptides active against gram-negative bacteria and include polymyxin B and polymyxin E (colistin). Polymyxins act as cationic detergents. They attach to and disrupt bacterial cell membranes. They also bind and inactivate endotoxin. Gram-positive organisms, Proteus sp, and Neisseria sp are resistant.

Owing to their significant toxicity with systemic administration (especially nephrotoxicity), polymyxins were, until recently, largely restricted to topical use. Ointments containing polymyxin B, 0.5 mg/g, in mixtures with bacitracin or neomycin (or both) are commonly applied to infected superficial skin lesions. Emergence of strains of Acinetobacter baumannii, Pseudomonas aeruginosa, and Enterobacteriaceae that are resistant to all other agents has renewed interest in polymyxins as parenteral agents for salvage therapy of infections caused by these organisms.

Fidaxomicin is a narrow-spectrum, macrocyclic antibiotic that is active against gram-positive aerobes and anaerobes but lacks activity against gram-negative bacteria. Fidaxomicin inhibits bacterial protein synthesis by binding to the sigma subunit of RNA polymerase. When administered orally, systemic absorption is negligible but fecal concentrations are high. Fidaxomicin has been approved by the FDA for the treatment for C difficile infection in adults. It is as effective as oral vancomycin and may be associated with lower rates of relapsing disease. Fidaxomicin is administered orally as a 200 mg tablet twice daily for 10 days.

Urinary antiseptics are oral agents that exert antibacterial activity in the urine but have little or no systemic antibacterial effect. Their usefulness is limited to lower urinary tract infections.

At therapeutic doses, nitrofurantoin is bactericidal for many gram-positive and gram-negative bacteria; however, P aeruginosa and many strains of Proteus are inherently resistant. Nitrofurantoin has a complex mechanism of action that is not fully understood. Antibacterial activity appears to correlate with rapid intracellular conversion of nitrofurantoin to highly reactive intermediates by bacterial reductases. These intermediates react nonspecifically with many ribosomal proteins and disrupt the synthesis of proteins, RNA, DNA, and metabolic processes. It is not known which of the multiple actions of nitrofurantoin is primarily responsible for its bactericidal activity.

There is no cross-resistance between nitrofurantoin and other antimicrobial agents, and resistance emerges slowly. As resistance to trimethoprim-sulfamethoxazole and fluoroquinolones has become more common in Escherichia coli, nitrofurantoin has become an important alternative oral agent for treatment of uncomplicated urinary tract infection.

Nitrofurantoin is well absorbed after ingestion. It is metabolized and excreted so rapidly that no systemic antibacterial action is achieved. The drug is excreted into the urine by both glomerular filtration and tubular secretion. With average daily doses, concentrations of 200 mcg/mL are reached in urine. In renal failure, urine levels are insufficient for antibacterial action, but high blood levels may cause toxicity. Nitrofurantoin is contraindicated in patients with significant renal insufficiency (creatinine clearance < 60 mL/min).

Anorexia, nausea, and vomiting are the principal side effects of nitrofurantoin. Neuropathies and hemolytic anemia occur in patients with glucose-6-phosphate dehydrogenase deficiency. Nitrofurantoin antagonizes the action of nalidixic acid. Rashes, pulmonary infiltration and fibrosis, and other hypersensitivity reactions have been reported.

Methenamine mandelate, 1 g four times daily, or methenamine hippurate, 1 g twice daily by mouth (children, 50 mg/kg/d or 30 mg/kg/d, respectively), is used only as a urinary antiseptic to suppress, not treat, urinary tract infection. Acidifying agents (eg, ascorbic acid, 4–12 g/d) may be given to lower urinary pH below 5.5. Sulfonamides should not be given at the same time because they may form an insoluble compound with the formaldehyde released by methenamine. Persons taking methenamine mandelate may exhibit falsely elevated tests for catecholamine metabolites.

Disinfectants are chemical agents or physical procedures that inhibit or kill microorganisms (Table 50–1). Antiseptics are disinfecting chemical agents with sufficiently low toxicity for host cells that they can be used directly on skin, mucous membranes, or wounds. Sterilants kill both vegetative cells and spores when applied to materials for appropriate times and temperatures. Some of the terms used in this context are defined in Table 50–2. 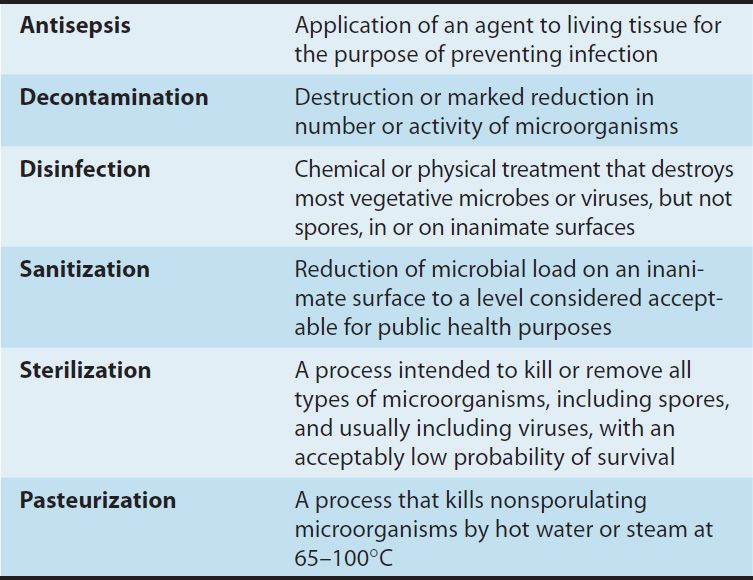