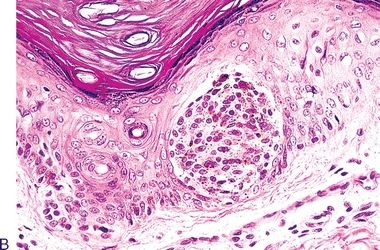 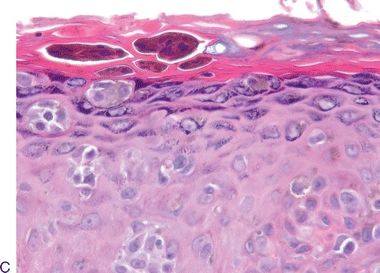 2.  Which of the following histopathologic features is characteristic of benign melanocytic proliferations?

3.  The following photomicrographs show different types of nevomelanocytic cells. Which of them depicts the neural type (“type C”)? 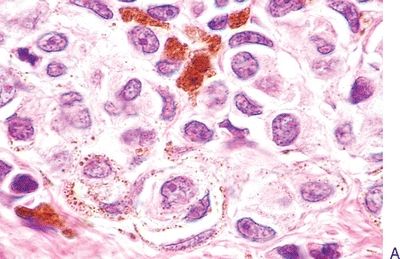 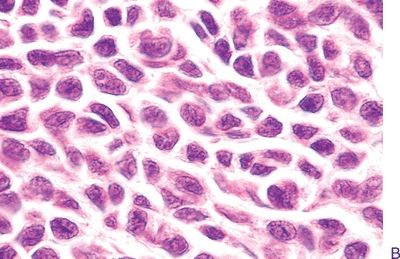 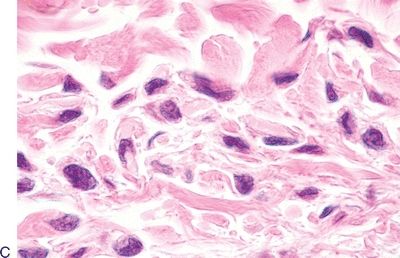 4.  This photomicrograph shows a melanocytic nevus that occupies the whole dermis and extends into the subcutaneous fat, surrounding skin appendages. Which of the following is the most likely diagnosis? 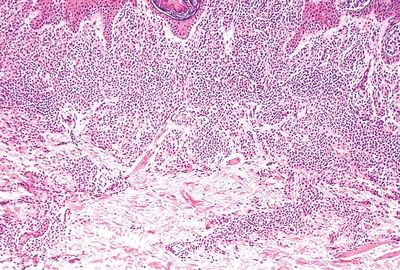 A.  Always accompanied by lack of melanin pigment

B.  Consistently associated with malignant features

C.  Due to apoptosis and melanosome vacuolization

D.  Present in approximately 50% of all melanocytic proliferations

E.  None of the above

6.  Melanocytic nevi arising at specific locations show atypical cytologic and architectural features that can be mistaken as evidence of malignancy. Such locations are the scalp and periauricular regions, the milk line (from axilla to groin), and the genital area. Is this true or false?

7.  Which of the following melanocytic nevi is misdiagnosed as malignant melanoma in as many as 40% of cases?

8.  A 0.4-cm dome-shaped red nodule is found on the neck of a 15-year-old male and clinically thought to be an angioma. An excisional biopsy demonstrates a neoplasm with a roughly triangular shape, its broad base corresponding to the epidermis and the apex deep in the dermis, as shown in this low-power photomicrograph (A). It consists of a mixture of atypical spindly and epithelioid cells with prominent nucleoli, as shown in this high-power photomicrograph (B). The spindle cell component is arranged in fascicles perpendicular to the epidermis, whereas epithelioid cells are interspersed at random. Pigment is scanty, but vascularity is abundant. Mitoses are seen in the superficial dermis. Which of the following is the most likely diagnosis? 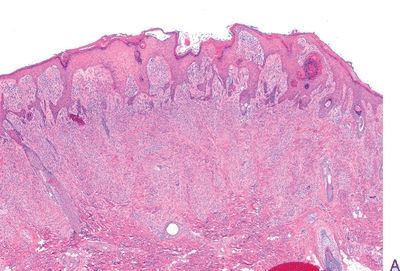 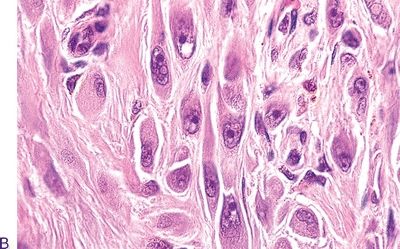 9.  This picture shows a melanocytic proliferation entirely circumscribed to the dermis. On higher power, most of the visible pigment is within melanophages. Which of the following is this type of nevus? 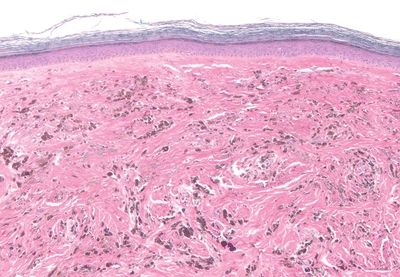 10.  Which of the following genetic mutations is shared by the common blue nevus, Mongolian spot, nevus of Ota, and nevus of Ito?

A.  Mutations in the BRAF and NRAS genes

B.  Mutations in the heterotrimeric G protein (GNAQ and GNA11) genes

11.  A 25-year-old man presents with innumerable pigmented skin lesions. His father died at age 50 of metastatic melanoma and has an older brother who was treated for melanoma at age 30. These low-power and high-power pictures demonstrate the histopathologic findings in a biopsy of one of the patient’s lesions. Which of the following is the most likely diagnosis? 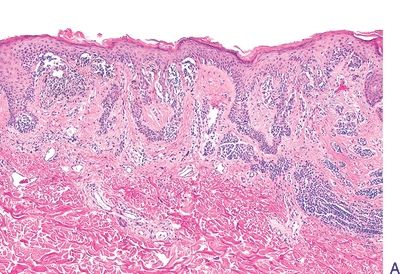 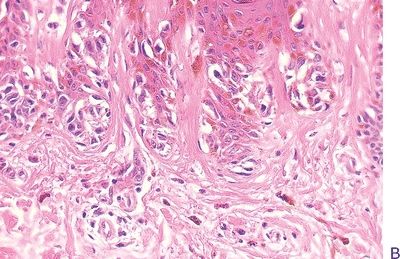 12.  According to the Clark system, which of the following is the level of invasion of a melanoma that fills the papillary dermis and extends to the interface with the reticular dermis?

13.  Which of the following is the appropriate method of measuring the thickness of a melanoma according to the Breslow system?

A.  From the top of the squamous layer to the deepest point of invasion

B.  From the top of the granular layer to the deepest point of invasion