Leukocytes constitute the cellular components of the innate and adaptive immune system and are critical for host defense. These cells mediate acute and chronic inflammation, modulate immune responses, and protect the host against numerous pathogens. It is no surprise that defects in leukocyte function predispose to various kinds of infection in proportion to the nature and severity of the defect.

Like other formed elements of the peripheral blood, neutrophils are the progeny of earlier progenitors that acquire the capacity to function as they mature in the bone marrow (Fig. 18-1). Neutrophils are distributed within the body in several discrete and highly dynamic compartments or pools (Fig. 18-2). In the marrow, mitotically active myeloid progenitors mature over a period of 7 to 10 days to give rise to large numbers of neutrophils. Under steady-state conditions, most of these newly formed neutrophils die without ever being released into the blood, constituting a storage pool that can be called upon during times of increased need. Upon release from the marrow, neutrophils enter the circulating pool, the only pool that is measured clinically. On average, neutrophils circulate for only 3 to 6 hours before migrating into tissues, where they may survive for up to 3 days. At any given time, roughly half of the neutrophils in the blood are adherent to vessel walls; these cells are referred to as the marginal pool. Finally, some circulating neutrophils are sequestered in the spleen. Normally, <5% of the neutrophils in the body are in the circulating pool, which turns over quickly. As a result, stimuli that alter the release of neutrophils from the marrow, neutrophil margination, or the migration of neutrophils into tissues can have rapid and sometimes profound effects on the peripheral blood neutrophil count.

Myelopoiesis. As granulocytes develop and mature, they go through a series of recognizable morphologic stages that correlate with the expression of genes that confer the specific functions indicated on the time line. HSC: hematopoietic stem cell (Used with permission from Gaines P and Berliner N. Granulocytopoiesis. In Clinical Hematology, Young N, ed, Philadelphia, USA, Mosby/Elsevier, 2006, 62.) 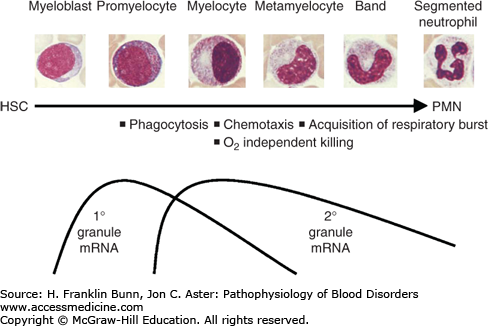 Neutrophil pools. The relative proportions of cells in various pools of neutrophils and neutrophilic progenitors are shown (see text for details). 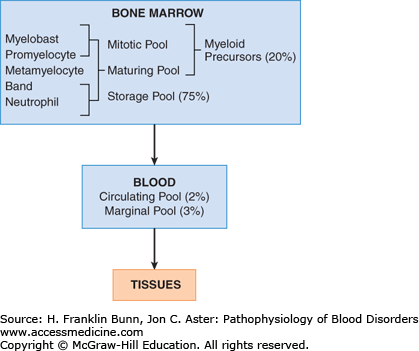 In most clinical laboratories, the normal white blood cell count ranges from 4500 to 11,000/μL, with approximately 60% of the cells being neutrophils. Leukocytosis, an elevation in the white blood cell count, usually stems from a pathologic insult that stimulates a systemic inflammatory reaction. By far the most common form of leukocytosis is granulocytosis, an increase in neutrophils also known as neutrophilia.

Acute inflammation of any cause can produce the rapid appearance of granulocytosis by mobilizing neutrophils from the marrow storage pool. In particularly severe bacterial infections, immature granulocytic forms, such as band cells or even earlier progenitors, may be released into the blood (a finding also called a left-shift), and in extreme cases the white blood cell count may rise to >50,000/mm3. In such instances the marked leukocytosis and the presence of immature cells may mimic the appearance of a myeloid leukemia (leukemoid reaction). Occasionally, the inflammatory process may involve the marrow itself and produce marrow fibrosis and distortion, leading not only to the release of immature myeloid elements but also nucleated erythroid progenitors and misshapen tear-drop red cells. This combination of features in a peripheral smear is referred to as leukoerythroblastosis. If the marrow involvement is extensive, myelophthisic anemia may result (Chapter 4). It should be emphasized, however, that in the vast majority of cases granulocytosis is a reaction to disorders involving tissues other than the marrow. In contrast, neutropenia, an abnormally low neutrophil count, is often caused by defects in neutrophil production that may require a bone marrow examination for evaluation.

Primary disorders associated with neutrophil dysfunction usually have a genetic basis. Although rare, they are of interest because unraveling of their pathogenesis has led to the identification of genes that regulate normal neutrophil development and function.

Granulocytosis can be primary or secondary (Table 18-1). Primary disorders associated with granulocytosis include myeloid neoplasms (discussed in subsequent chapters) and a variety of genetic disorders that merit brief mention.


Secondary causes of granulocytosis are much more common than primary causes and can be sorted into the following pathogenic categories.

EVALUATION OF THE PATIENT WITH GRANULOCYTOSIS

Neutrophilia is often detected during the evaluation of acutely ill patients suspected of having infections. In patients with acute infections, neutrophils often contain toxic granulation (persistence of primary granules), cytoplasmic vacuoles, and Döhle bodies, pale blue cytoplasmic aggregates of endoplasmic reticulum (Fig. 18-3). In severe sepsis, phagocytosed organisms occasionally may be seen within neutrophils. In acutely ill patients, the primary clinical focus is on the identification of infectious agents and the institution of appropriate antibiotic therapy. 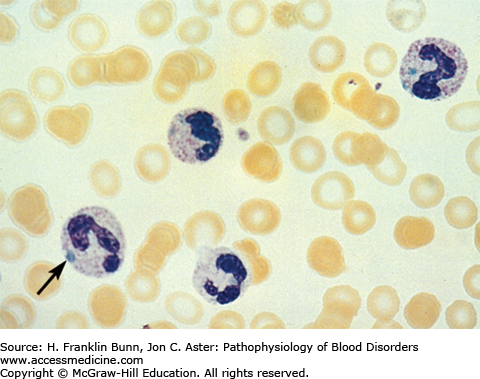 The differential diagnosis of neutrophilia in sub-acutely or chronically ill patients is quite broad and includes numerous infectious, inflammatory, and neoplastic disorders. Mild neutrophilia in asymptomatic patients can be related to smoking or subtle inflammatory disease but requires evaluation to rule out important acquired diseases such as chronic myelogenous leukemia.

Neutrophilia is usually reactive and indicative of a normal-functioning bone marrow; consequently, bone marrow evaluation is usually not necessary. The exceptions are neutrophilias associated with either leukoerythroblastosis or the presence of immature myeloid precursors in the peripheral blood. Leukoerythroblastosis is indicative of an infiltrative disorder in the marrow, such as metastatic cancer, primary bone marrow disorders associated with fibrosis, or a disseminated granulomatous disease such as tuberculosis. The presence of immature myeloid precursors (often in concert with eosinophilia and basophilia) is characteristic of myeloid neoplasms such as chronic myelogenous leukemia and polycythemia vera, both of which can be distinguished from reactive processes by molecular tests described in Chapter 20. In unexplained persistent neutrophilia, a bone marrow examination may be informative diagnostically and should always include cultures for tuberculosis and fungal pathogens.