Introduction – Embryology of the Arteries and Veins 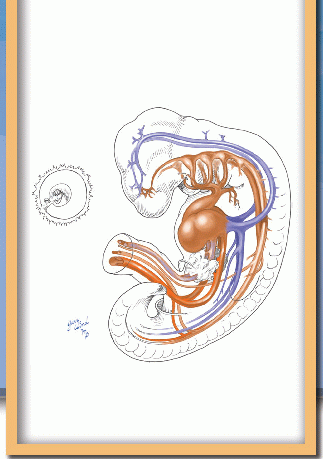 Introduction – Embryology of the Arteries and Veins
Development of the Blood Vessels
Overview
Between the third and eighth week of embryonic gestation (measured in postovulatory days), the blood vessels form and evolve into an approximation of the definitive human circulatory pattern. Toward the end of the third week, primitive circulation begins, propelled by the newly fused heart. Rapid changes in the fourth week set the stage for extensive remodeling that extends through the second and final month of the embryonic period. Development at the cephalad end of the embryo proceeds more rapidly than at the caudal end as the arteries and veins change and interact with the growing thoracoabdominal organs, parietes, and extremities. The incredibly complex bioarchitectural development and reorganization take place while the embryo is between 3 mm and 3 cm in size (crown-to-rump length; Fig. 1). The next significant change in the vascular pattern occurs at birth.

Understanding the changes that take place in the evolution of the adult vascular system provides a logical framework in which to conceptualize the many variations and anomalies that one will encounter in vascular surgery.
Primordial Vessels and the Inception of Circulation
At the inception of circulation, the embryo appears as a polypoid excrescence within the chorionic vesicle (Fig. 2). The pedicle constitutes the body stalk. The head of the polyp is subtly bilobed, with the groove separating the two lobes reflecting the margins of the embryonic disk within. The dome above the 3-mm embryonic plate is the amnion, and the pendant bleb is the yolk sac.
Between these mirror-image domes, the elongating 2-mm embryonic disk rolls its lateral edges up to begin the closure of the neural groove, and the first somites appear at midbody (Fig. 3). The lining cells of mesenchymal clefts that have developed independently until this time begin to interconnect and form two pairs of longitudinal channels, one medial and one lateral. The medial channels attach to the ends of the paired heart tubes at the cephalad end of the embryo, forming the primitive aortas, which extend into distal vitelline arterial networks. The lateral set attaches to the caudal ends of the heart tubes and will become the vitelline and umbilical veins.


Within a few days, the heart has fused and begun peristaltic pulsations that propel blood through the vitelline circuits. The vitelline circulation provides nutrients from the rapidly regressing mammalian yolk sac for only a brief time before this function is assumed by the precociously maturing chorion. The umbilical vessels, extending from the vitelline complexes through the body stalk and then to the chorion, become dominant.

During the fourth week, the embryo attains a length of 4 to 5 mm, develops a full complement of somites, and begins a series of changes in vascular morphology (Fig. 4). The paired aortas fuse for much of their length and develop numerous dorsal, lateral, and ventral branches. A series of five additional pairs of arterial arches pass laterally around the pharynx between the developing branchial outpouchings, connecting the cephalad apex of the heart to the remaining unfused dorsal aortas. The cephalad arches regress as fast as caudal arches are added, and the six arches undergo evolutionary changes during weeks 5 to 7 (see below). The multiple vitelline arteries regress, leaving three that will become the celiac, superior mesenteric, and inferior mesenteric arteries. Paired pre- and postcardinal veins form in the body wall and attach via common cardinal veins to the caudal horns of the heart, now known as the sinus venosus.
By the end of 4 weeks, four limb buds are evident, with the cephalad set more advanced. The remnants of the vitelline veins are forming sinusoids in the developing liver and coalescing to form the portal venous system. The subsequent simultaneous developments in the arterial and venous systems of the trunk and extremities merit separate description, keeping in mind the parallel time course of these events.


The sixth (pulmonary) arches grow from the dorsal aortas to meet the developing pulmonary arteries that extend from the aortic sac to the lung buds. The right sixth arch disappears while the left becomes the ductus arteriosus (later the ligamentum arteriosum). During weeks 5 through 7, when these arch changes are taking place, the truncus and aortic sac of the heart are separating into aortic and pulmonary stems.

Tags: Anatomic Exposures in Vascular Surgery
May 22, 2016 | Posted by drzezo in ANATOMY | Comments Off on Introduction – Embryology of the Arteries and Veins
Premium Wordpress Themes by UFO Themes
WordPress theme by UFO themes
%d bloggers like this: