(1) Within the intestinal tract, three organisms—the ameba Entamoeba histolytica, the flagellate Giardia lamblia, and the sporozoan Cryptosporidium hominis—are the most important.

(2) In the urogenital tract, the flagellate Trichomonas vaginalis is the important pathogen.

(3) The blood and tissue protozoa are a varied group consisting of the flagellates Trypanosoma and Leishmania and the sporozoans Plasmodium and Toxoplasma. The important opportunistic lung pathogen Pneumocystis will be discussed in this group, although there is molecular evidence that it should be classified as a fungus.

The major and minor pathogenic protozoa are listed in Table 51–1. 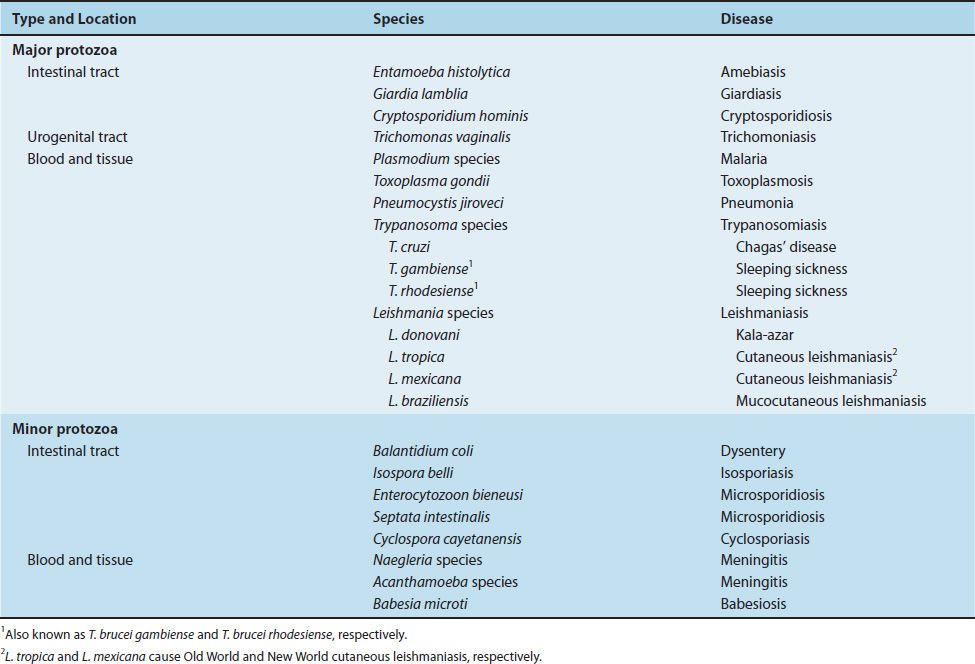 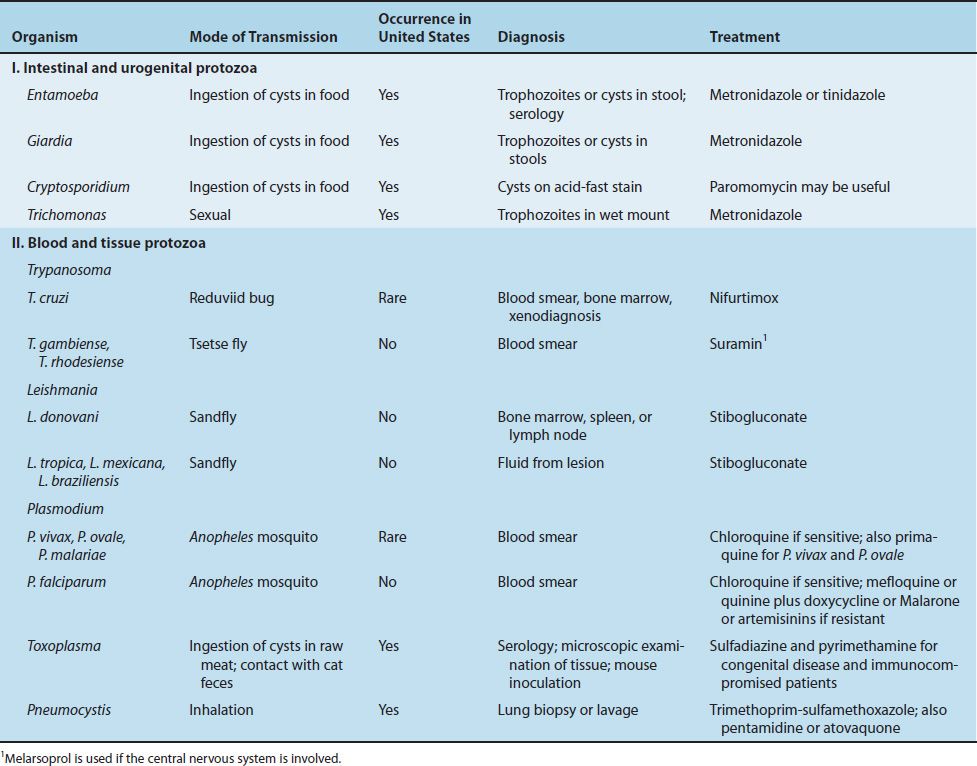 The medically important stages in the life cycle of the intestinal protozoa are described in Table 51–3.

The life cycle of E. histolytica is shown in Figure 51–1. The life cycle has two stages: the motile ameba (trophozoite) and the nonmotile cyst (Figures 51–2A and B, 51–3, and 51–4). The trophozoite is found within the intestinal and extraintestinal lesions and in diarrheal stools. The cyst predominates in non-diarrheal stools. These cysts are not highly resistant and are readily killed by boiling but not by chlorination of water supplies. They are removed by filtration of water. 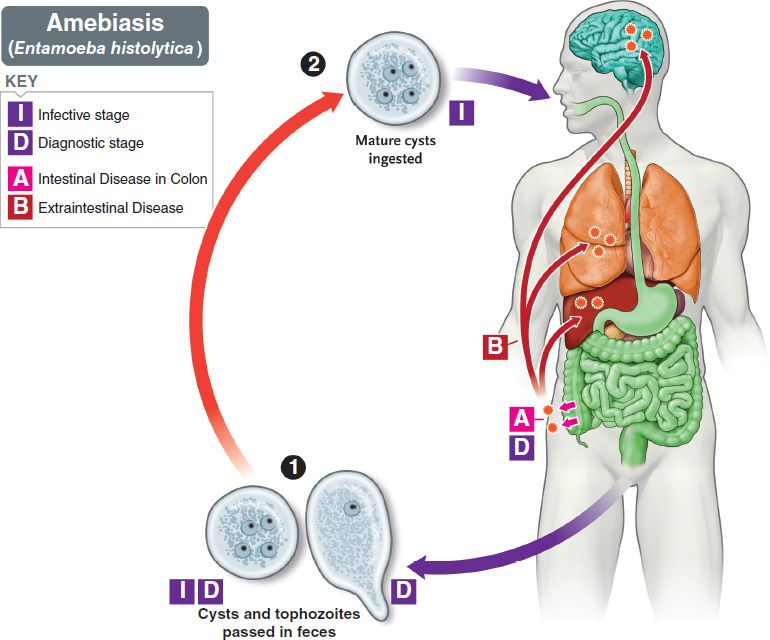 FIGURE 51–1 Entamoeba histolytica. Life cycle. Top blue arrow shows cysts being ingested. Within the intestine, the cyst produces trophozoites that cause amebic dysentery in the colon and can spread to the liver (most often), lung, and brain (Boxes A and B). Bottom blue arrow shows cysts and trophozoites being passed in the stool and entering the environment. Red arrow indicates survival of cysts in the environment. (Provider: Centers for Disease Control and Prevention.) 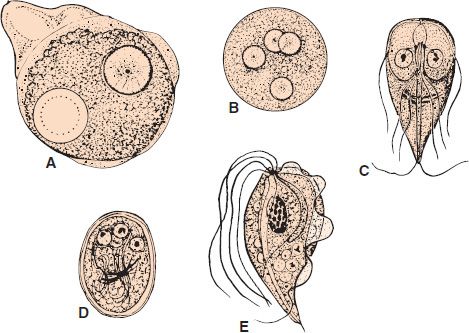 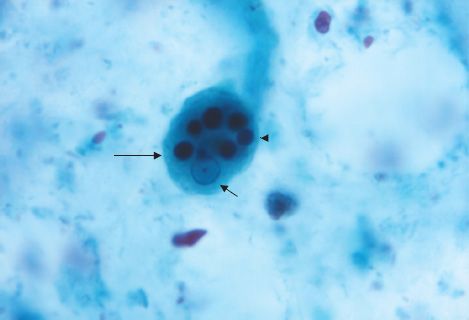 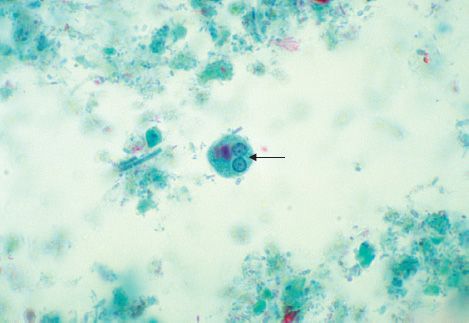 FIGURE 51–4 Entamoeba histolytica—cyst. Arrow points to a cyst of E. histolytica. Two of the four nuclei are visible just to the left of the head of the arrow. (Provider: Centers for Disease Control and Prevention.)

The cyst has four nuclei, an important diagnostic criterion. Upon excystation in the intestinal tract, an ameba with four nuclei emerges and then divides to form eight trophozoites. The mature trophozoite has a single nucleus with an even lining of peripheral chromatin and a prominent central nucleolus (karyosome).

Antibodies are formed against trophozoite antigens in invasive amebiasis, but they are not protective; previous infection does not prevent reinfection. The antibodies are useful, however, for serologic diagnosis.

The organism is acquired by ingestion of cysts that are transmitted primarily by the fecal–oral route in contaminated food and water. Anal–oral transmission (e.g., among male homosexuals) also occurs. There is no animal reservoir. The ingested cysts differentiate into trophozoites in the ileum but tend to colonize the cecum and colon.

The trophozoites invade the colonic epithelium and secrete enzymes that cause localized necrosis. Little inflammation occurs at the site. As the lesion reaches the muscularis layer, a typical “flask-shaped” ulcer forms that can undermine and destroy large areas of the intestinal epithelium (Figure 51–5). Progression into the submucosa leads to invasion of the portal circulation by the trophozoites. By far the most frequent site of systemic disease is the liver, where abscesses containing trophozoites form. 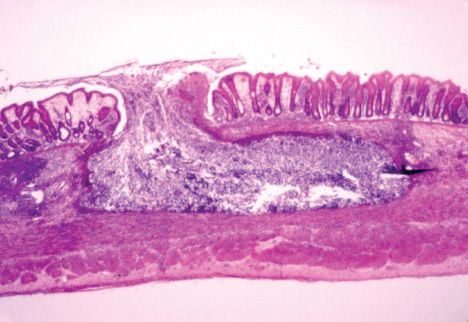 Infection by E. histolytica is found worldwide but occurs most frequently in tropical countries, especially in areas with poor sanitation. About 1% to 2% of people in the United States are affected. Infection is common in men who have sex with men.

Acute intestinal amebiasis presents as dysentery (i.e., bloody, mucus-containing diarrhea) accompanied by lower abdominal discomfort, flatulence, and tenesmus. Chronic amebiasis with low-grade symptoms such as occasional diarrhea, weight loss, and fatigue also occurs. Roughly 90% of those infected have asymptomatic infections, but they may be carriers, whose feces contain cysts that can be transmitted to others. In some patients, a granulomatous lesion called an ameboma may form in the cecal or rectosigmoid areas of the colon. These lesions can resemble an adenocarcinoma of the colon and must be distinguished from them.

Amebic abscess of the liver is characterized by right-upper-quadrant pain, weight loss, fever, and a tender, enlarged liver. Right-lobe abscesses can penetrate the diaphragm and cause lung disease. Most cases of amebic liver abscess occur in patients who have not had overt intestinal amebiasis. Aspiration of the liver abscess yields brownish-yellow pus with the appearance and consistency of anchovy paste.

Diagnosis of intestinal amebiasis rests on finding either trophozoites in diarrheal stools or cysts in formed stools (Figures 51–3 and 51–4). Diarrheal stools should be examined within 1 hour of collection to see the ameboid motility of the trophozoite. Trophozoites characteristically contain ingested red blood cells. The most common error is to mistake fecal leukocytes for trophozoites. Because cysts are passed intermittently, at least three specimens should be examined. The O&P test is insensitive and false negatives commonly occur. Also, about half of the patients with extraintestinal amebiasis have negative stool examinations.

E. histolytica can be distinguished from other amebas by two major criteria: (1) The first is the nature of the nucleus of the trophozoite. The E. histolytica nucleus has a small central nucleolus and fine chromatin granules along the border of the nuclear membrane. The nuclei of other amebas are quite different. (2) The second is cyst size and number of its nuclei. Mature cysts of E. histolytica are smaller than those of Entamoeba coli and contain four nuclei, whereas E. coli cysts have eight nuclei.

A complete examination for cysts includes a wet mount in saline, an iodine-stained wet mount, and a fixed, trichrome-stained preparation, each of which brings out different aspects of cyst morphology. These preparations are also helpful in distinguishing amebic from bacillary dysentery. In the latter, many inflammatory cells such as polymorphonuclear leukocytes are seen, whereas in amebic dysentery, they are not.

Serologic testing is useful for the diagnosis of invasive amebiasis. The indirect hemagglutination test is usually positive in patients with invasive disease but is frequently negative in asymptomatic individuals who are passing cysts.

The treatment of choice for symptomatic intestinal amebiasis or hepatic abscesses is metronidazole (Flagyl) or tinidazole. Hepatic abscesses need not be drained. Asymptomatic cyst carriers should be treated with iodoquinol or paromomycin.

Prevention involves avoiding fecal contamination of food and water and observing good personal hygiene such as handwashing. Purification of municipal water supplies is usually effective, but outbreaks of amebiasis in city dwellers still occur when contamination is heavy. The use of “night soil” (human feces) for fertilization of crops should be prohibited. In areas of endemic infection, vegetables should be cooked.

The life cycle of G. lamblia is shown in Figure 51–6. The life cycle consists of two stages: the trophozoite and the cyst (Figures 51–2C and D, and 51–7). The trophozoite is pear-shaped with two nuclei, four pairs of flagella, and a suction disk with which it attaches to the intestinal wall. The oval cyst is thick-walled with four nuclei and several internal fibers. Each cyst gives rise to two trophozoites during excystation in the intestinal tract. 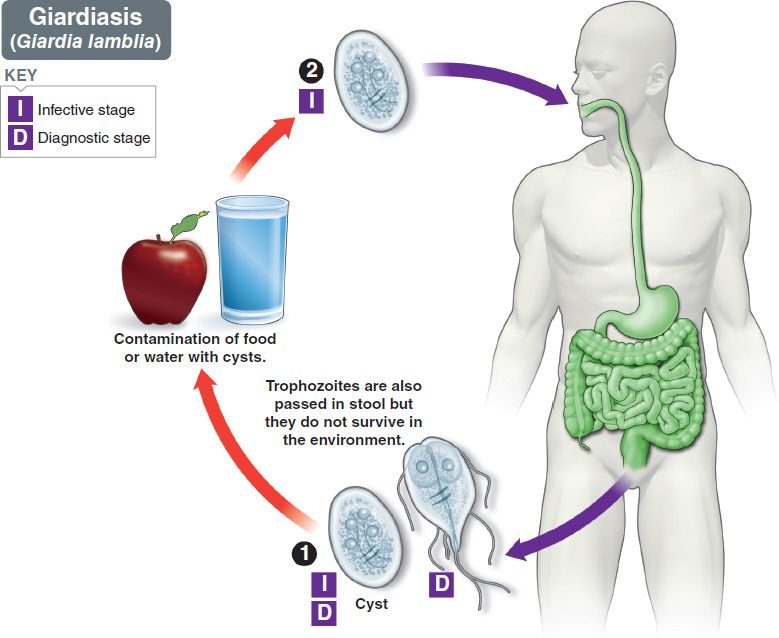