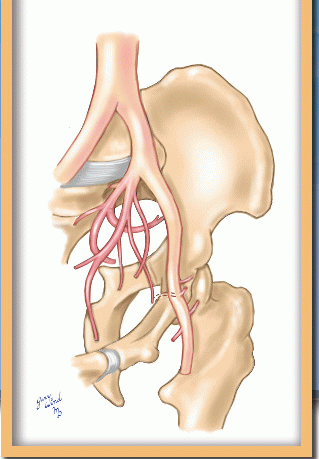 Surgical Anatomy of the Infrarenal Aorta and Iliac Arteries
The lower aortic segment between the renal artery origins at the cephalad end of the second lumbar vertebra and the bifurcation at the fourth lumbar vertebra lies slightly to the left of midline (Fig. 12-1). Paired lumbar arteries arise from the back wall of the aorta and girdle the first through fourth vertebral bodies. The fifth lumbar arteries lie below the bifurcation and may arise from the common iliac arteries or the middle sacral artery. The inferior mesenteric artery is the only visceral branch arising in this segment of aorta (see Chapter 10).
The common iliac arteries diverge from the aorta and descend a short distance to the lip of the true pelvis where they bifurcate into internal
and external branches (Fig. 12-2). The internal iliac arteries dive into the bowl of the true pelvis where they immediately divide in a highly variable pattern, sending branches to the pelvic viscera and the external pelvic muscles (see Chapter 19, Figs. 19-20 and 19-21). The external iliac arteries hug the pelvic brim medial to the psoas muscles and give off only the small inferior epigastric and deep circumflex iliac branches near the inguinal ligament.


Iliac Veins
The bifurcation of the aorta is separated from the fourth lumbar vertebra by the left common iliac vein. The vein crosses beneath the right iliac artery and joins the right iliac vein to form the vena cava on the right side of L5 (Fig. 12-3). Left common iliac vein compression from the overlying right common iliac artery can lead to venous hypertension and increased potential for thrombosis (May-Thurner syndrome), an anatomic variant that has been well described elsewhere.1 Adhesion between the bifurcations of the aorta and vena cava is not uncommon, making manipulation of these vessel segments hazardous. These vessel segments are also vulnerable to injury during posterior lumbar disc surgery when the rongeur inadvertently bites through the anterior longitudinal ligament. Arterial, venous, and combined injury resulting in arteriovenous fistulae have been reported.2 The iliac veins lie medial and deep to the common and external iliac arteries, occupying a position deep in the groove between the psoas muscle and pelvic brim.


Retroperitoneal Relationships
The gonadal vessels and ureters lie along the psoas muscles in the paravertebral gutters and cross anterior to the iliac vessels in the pelvis (Fig. 12-4). The root of the sigmoid mesocolon crosses the left iliac vessels, and the right iliac vessels lie directly beneath the peritoneum.


The lumbar branches of the aorta and vena cava pass beneath the sympathetic chains and the
fibrous arches between slips of psoas origin and hug the vertebral bodies deep to the psoas muscles (Fig. 12-5). Occasional venous tributaries may overlie the sympathetic trunks. The lumbar sympathetic trunks lie more anteriorly on the vertebral bodies than do their thoracic counterparts. The lumbar trunks occupy a position between the anterior edges of the psoas muscles and the great vessels. Because of the offset arrangement of the great vessels toward the right, there is a slightly greater space between the lateral border of the aorta and psoas on the left than between the lateral border of the vena cava and psoas on the right. The sympathetic trunks pass behind the common iliac vessels into the sacral hollow of the pelvis.


The paired lumbar veins are interconnected. The major communications are the large ascending lumbar veins that lie far posterior in the angle between the vertebral bodies and the transverse processes, deep to the psoas muscles. Smaller anterior venous interconnections may lie superficial to the sympathetic trunks and make access to the trunks and ganglia more difficult.


Interruption of sympathetic outflow from the first two lumbar ganglia through the hypogastric nerves and plexuses impairs ejaculation in males.


After the peritoneal cavity has been entered, the transverse colon and greater omentum are displaced from the abdomen, wrapped in moistened laparotomy pads, and reflected onto the superior abdominal wall. The small intestine is eviscerated and placed in a sterile plastic sac or wrapped in
moistened laparotomy pads and retracted into the right side of the abdomen. The retroperitoneal space is entered through an incision in the posterior parietal peritoneum near the duodenum (Fig. 12-10). This incision is carried superiorly to include division of the ligament of Treitz, allowing the third and fourth portions of the duodenum to be reflected toward the right side. Any identifiable lymphatic tissue overlying the anterior surface of the aorta should be ligated to prevent chylous leaks.10 The periadventitial plane over the glistening surface of the anterior aorta is exposed by incising a thin layer of fibrous tissue. The incision is continued superiorly to the level of the left renal vein, which crosses anterior to the aorta in 97% of cases11 and is a useful landmark for identifying the juxtarenal aorta (see Chapter 11).


The incision through the posterior peritoneum and preaortic tissue is continued inferiorly near the
base of the small bowel mesentery to the level of the aortic bifurcation. The incision should be made to the right side of the aortic midline to avoid injuring the inferior mesenteric artery and other vessels in the sigmoid mesentery. Confining division of preaortic tissues to the right side also reduces the risk of injuring the preaortic autonomic plexus with the resulting sexual dysfunction.12 Mobilization of the posterior wall of the aorta should be performed with great care to avoid injury to venous structures. Aortic mobilization just below the renal arteries requires careful finger dissection close to the posterior aortic wall, avoiding lumbar arterial branches. A lumbar venous plexus lies in the retroaortic tissues near the vertebral column and is prone to rapid hemorrhage when injured.13 Retroaortic left renal veins and renal collars (i.e., circumaortic left renal veins) are especially prone to injury if unrecognized.14