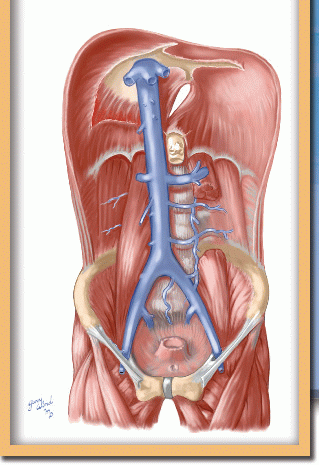 Inferior Vena Cava
Surgical Anatomy of the Inferior Vena Cava
The distal inferior vena cava begins at the confluence of the common iliac veins anterior to the fifth lumbar vertebra to the right of the midline (Fig. 13-1). It penetrates the membranous portion of the diaphragm at the level of T8 and immediately drains into the right atrium. The vena cava is crossed by the root of the small bowel mesentery, the first and third portions of the duodenum, and the head of the pancreas (see Figs. 10-5 and 12-4). The vena cava is separated from the portal vein anteriorly by the cleft of the epiploic foramen. The position of the vena caval trunk deviates slightly more to the right above the renal veins as the vessel traverses the liver, partially embedded between the caudate and right lobes.

Infrarenal Vena Cava
The only anterior branch of the infrarenal vena cava is the small right gonadal vein. The paired lumbar veins are situated posteriorly and contribute to an extensive paravertebral venous plexus (Fig. 13-3). Longitudinal ascending lumbar veins within this plexus connect with the lateral sacral veins of the pelvis and with the azygous and hemiazygous veins of the chest. There are other variable connections between this system and veins of the posterior body wall as well as occasional connections with renal and adrenal veins. In addition, vein branches draining the spinal canal anastomose with the paravertebral plexus via the intervertebral foramina. These spinal vein branches extend along the length of the spinal canal as an extensive valveless plexus draining both bone and neural structures. This complex, described by Batson, is thought to facilitate metastasis and spread of infection to the spinal column and brain.


Perirenal Vena Cava
The renal veins enter the vena cava at the level of L2 and are usually single. The right renal vein follows a short path anteromedially (see Fig. 11-2) from the renal hilum. The left renal vein arches across the aorta in the acute angle formed by the takeoff of the superior mesenteric artery and joins the vena cava at a 90° angle. The anterior relationships of this segment of vena cava are described in Chapter 11.

Retrohepatic Vena Cava
The portion of inferior vena cava traversing the liver is enfolded on three sides by liver substance (Fig. 13-4). There are several small branches draining from the caudate lobe directly into the vena cava. At the dome of the liver, the vena cava receives the large hepatic veins, usually three in number. The hepatic vein-vena cava junction is located at the anterior angle of the diamond-shaped bare area bounded by the coronary
ligaments (see Fig. 10-5). The proximity of these structures must be kept in mind when dividing the left triangular ligament and falciform ligament lest the veins be entered.

Exposure of the Infrahepatic Vena Cava
The popularity of intraluminal devices for the treatment of venous thrombosis has rendered elective surgical exposure of the inferior vena cava virtually obsolete. These devices are effective and extremely convenient as they can be inserted percutaneously through the jugular or femoral vein with low associated morbidity.1 Modern filter devices can be placed permanently or on a temporary basis; indications and outcomes are well described elsewhere.1,2 Despite the ease of placement, complications have been described from filter migration, including filter embolization, strut fracture, and vena cava perforation.3 Open extraction has become necessary in some cases involving retroperitoneal bleeding, bowel perforation, or aortic puncture.3,4
Only gold members can continue reading. Log In or Register to continue

Tags: Anatomic Exposures in Vascular Surgery
May 22, 2016 | Posted by drzezo in ANATOMY | Comments Off on Inferior Vena Cava
Premium Wordpress Themes by UFO Themes
WordPress theme by UFO themes
%d bloggers like this: