Cutaneous drug reactions can produce a variety of histopathologic inflammatory and even neoplastic patterns. Hence it is vitally important to know the clinical history and knowing if the clinician is suspecting a drug reaction. However, since the clinical morphologic appearance of many drug-induced diseases can so closely mimic the “true” non-drug-induced form, the pathologist should maintain a low threshold for suggesting the possibility of a drug-induced condition, as treatments may be significantly different. It is often stated that the skin may display only limited reaction patterns to different noxious stimuli, and with drug reactions this is also the case. However, certain clues can help point the observant pathologist or dermatopathologist to the correct diagnosis. We hope to summarize these most important clues in this chapter.
This chapter was also constructed with the idea that the reader has a basic understanding of the classic histologic findings of dermatologic conditions that can be mimicked when the skin reacts to a medication. If the reader desires a more detailed summary of the histologic features of these entities, it is recommended that the reader peruse a more in-depth dermatopathologic tome.

This is the most common type of drug reaction. Morbilliform drug reactions have been associated with a number of inflammatory patterns. In one large study, a superficial perivascular and interstitial infiltrate containing eosinophils and sometimes neutrophils was described as the most common pattern. Vacuolar interface changes and/or spongiosis can also be present with or without Civatte bodies (individually dead or dying keratinocytes). Sometimes a nondescript sparse lymphocytic infiltrate is evident. Therefore, a definitive diagnosis may be difficult, and hence the importance of clinical information. A descriptive diagnosis, consistent with or compatible with a morbilliform drug eruption may be the only diagnosis a pathologist can render, even with accurate clinical history.
The histologic differential diagnosis depends on the predominant histologic pattern at hand and may include erythema multiforme, viral exanthem, connective tissue disorders such as lupus erythematosus, and dermatomyositis, early graft vs. host disease, urticaria, and early leukocytoclastic vasculitis, among others.

This is the second most common pattern of drug reaction. Urticarial drug reactions are histologically indistinguishable from other urticarial reactions, such as idiopathic urticaria, and an arthropod bite reaction displaying a perivascular to interstitial infiltrate of lymphocytes, eosinophils, and occasionally neutrophils and sometimes dilated lymphatics in later lesions.
As noted above, the differential diagnosis histologically includes idiopathic urticaria, arthropod bite reaction, urticarial vasculitis, and on occasion tinea (dermatophytosis).

Initially, there is an acute vacuolar interface reaction, with necrotic keratinocyte along the junctional zone (i.e. the stratum corneum is still “basket-weave”) and there is no evidence of an altered cornified layer. This can progress to subepidermal vesiculation, and necrotic keratinocytes can also be found throughout the epidermis. In addition, there is a variable superficial and deep perivascular infiltrate composed in addition to lymphocytes, often of granulocytes, including neutrophils and eosinophils. There may be papillary dermal edema. This pattern is in contrast to erythema multiforme (EM), which can appear very similar except that in lesions of EM, the dermal inflammatory infiltrate is typically composed predominantly of lymphocytes (Fig. 3.1). 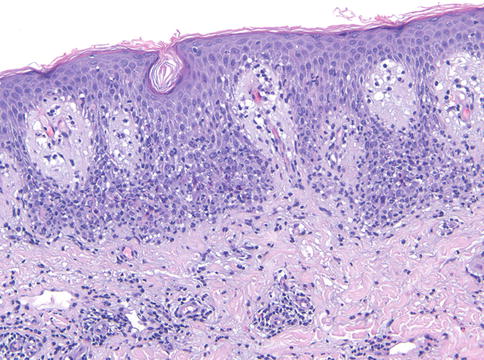 Fixed drug eruption. There is an acute interface reaction, with an infiltrate containing granulocytes and melanophages (200×)
Established lesions that recur show similar features as in acute cases, but melanophages are also present in the superficial dermis.
The histologic differential diagnosis includes mainly erythema multiforme, urticarial bullous pemphigoid, and on occasion erythema dyschromicum perstans and variants.

The photoallergic pattern may be difficult to distinguish from a prototypical spongiotic eczematous dermatitis. The perivascular infiltrate may on occasion extend to involve the deep vascular plexus. In severe acute cases, spongiotic vesiculation may occur. Long-standing lesions may show signs of chronicity, including stellate or multinucleate mesenchymal cells, telangiectasia, and lichenification. The histologic differential diagnosis includes other spongiotic dermatitides such as allergic contact dermatitis. The phototoxic reaction can be likened to a sunburn reaction, and the hallmark is epidermal necrosis of varying degree. On occasion, erythema multiforme and TEN/SJS might be considered.

EM, SJS, and TEN are clinically different diseases, and classification depends in part upon the total body surface area involved by the disease. Lesions range from targetoid to vesicular, and in the case of TEN, larger expanses of epidermal necrosis. Although EM can be caused by drugs, infections are much more common, whereas, in contrast, drugs such as sulfonamides, antibiotics, anticonvulsants, and some NSAIDs are the major causes of SJS and TEN.
Histologically, EM, SJS, and TEN may have significantly overlapping features, and on occasion can be indistinguishable. All demonstrate a vacuolar interface reaction of varying intensity, also depending on the age of the lesion. The infiltrate is largely lymphocytic, and usually superficial, and eosinophils may also be present. Necrotic keratinocytes are also present in varying degree. In all forms of the disease, the process is acute, and thus the stratum corneum will retain its normal basket-weave pattern. Minor patterns also occasionally present include spongiosis and ballooning of keratinocytes . As vacuolar alteration progresses, a subepidermal vesicle or bulla may form (Fig. 3.2). In TEN, there is often full-thickness epidermal necrosis early in the course, and a sparse infiltrate (Fig. 3.3) 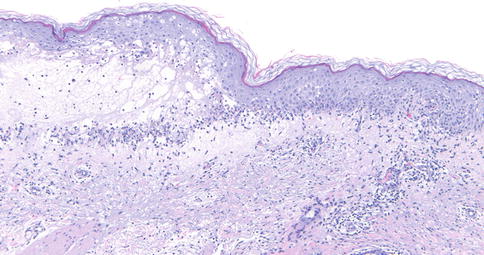 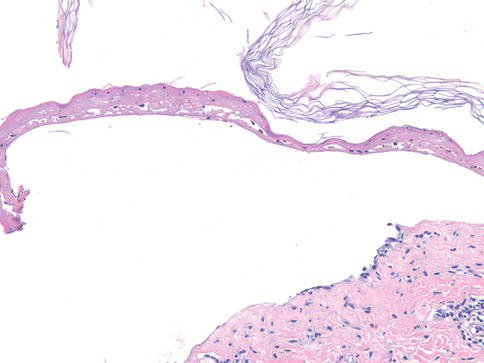 Histologically, the pattern can be indistinguishable from lichen planus, with irregular epidermal hyperplasia, hypergranulosis, and hyperkeratosis, and both may contain eosinophils. However, focal parakeratosis is more often observed in lichenoid drug eruption. Another clue is the presence of dyskeratotic keratinocytes (cytoid bodies) in the granular and cornified layer. The inflammatory infiltrate may be deeper and may also contain plasma cells (Fig. 3.4). 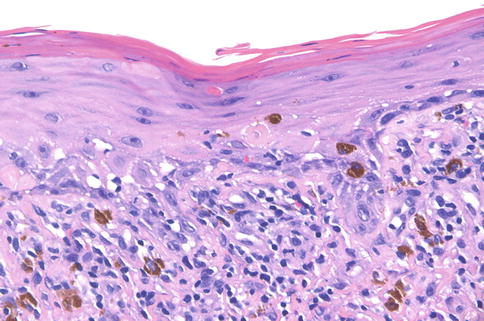 This, too, may appear similar histologically to classic psoriasis, but diagnostic features such as suprapapillary plate thinning and tortuous papillary dermal capillaries may be absent. Reactions to tumor necrosis factor (TNF) inhibitors, used in treatment of psoriasis and other autoimmune diseases, including inflammatory bowel disease, may present with a variety of reaction patterns, but most commonly a spongiotic to psoriasiform dermatitis. Separating this from psoriasis when used in treatment of that disorder can prove challenging (Fig. 3.5). 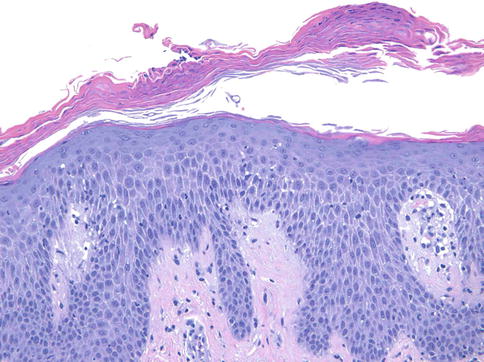 This is also indistinguishable histologically from non-drug-induced bullous pemphigoid. Clinically it tends to occur in younger patients, and in salt-split skin immunoreactants may be found on the floor of the blister rather than the roof (as in idiopathic bullous pemphigoid). Direct immunofluorescence (DIF) findings are similar to non-drug-induced cases.
Differential diagnosis also includes epidermolysis bullosa acquisita (EBA), cicatricial pemphigoid, and, rarely, porphyria cutanea tarda and pseudoporphyria.

NSAIDs are the most common culprit. Voriconazole toxicity has more recently been associated with this pattern. This is often indistinguishable from non-drug-induced cases, but papillary dermal eosinophils may be a clue. The absence of solar elastosis may be a clue to distinguish from PCT (Fig. 3.6). 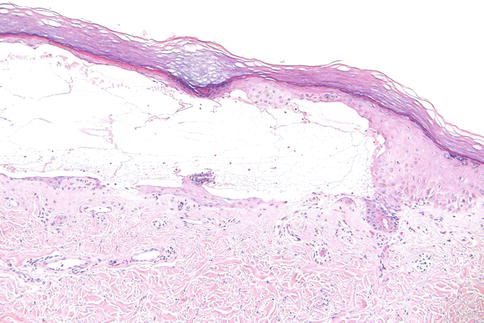 Pseudoporphyria due to voriconazole. A pauci-inflammatory subepidermal bulla is evident, with some re-epithelialization (100×)
The histologic differential diagnosis also includes pauci-inflammatory bullous pemphigoid, bullous amyloidosis, and EBA.

This subcorneal pustular dermatitis is a close mimic of pustular psoriasis. Clinical features, including the time course of the eruption and its resolution upon withdrawal of a putative drug culprit, may be essential. Histologically, subcorneal pustules are often present in a background of spongiosis. Scattered apoptotic keratinocytes, if present, can be a helpful clue. Papillary dermal edema is also more common than in pustular psoriasis. The dermis shows a mixed infiltrate, often with eosinophils and neutrophils, but a similar infiltrate can be present in pustular psoriasis. Eosinophils are less common in conventional plaque psoriasis. As with most skin specimens that contain neutrophilic pustules, a PAS-D stain could be considered to rule out a fungal infection (Fig. 3.7). 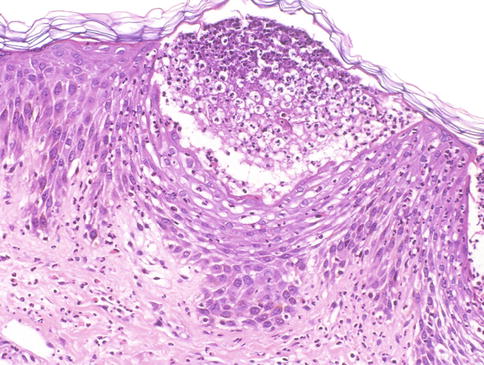