B.  Normal volume of uterus

C.  No significant risk of choriocarcinoma

2.  The products of conception from a 20-week gestation are analyzed by p57 immunohistochemistry. Expression of p57 is detected in villous trophoblast and stromal cells. Subsequently, genotyping demonstrates biparental diploidy, with one chromosomal complement from the father and one from the mother. These findings are consistent with:

3.  An exaggerated placental site is found in up to 2% of first-trimester abortions. This benign lesion is characterized by an increased number of:

4.  Which of the following statements is true about the gestational trophoblastic disease depicted in this photomicrograph? 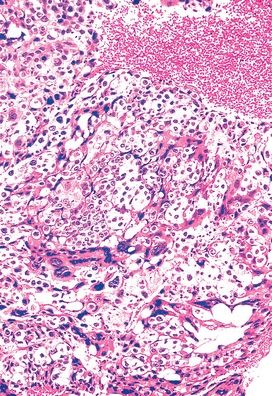 A.  Develops most frequently from ectopic pregnancy

D.  Rarely metastasizes to the brain

5.  One year after a term pregnancy, a 40-year-old woman undergoes hysterectomy because of a neoplasm infiltrating the uterine fundus to the serosa. Its histologic appearance is shown in this photomicrograph. Cells are immunoreactive for HSD3B, cytokeratin, and human placental lactogen (hPL), but negative for p63. The Ki-67 labeling index is approximately 15%. This tumor is a: 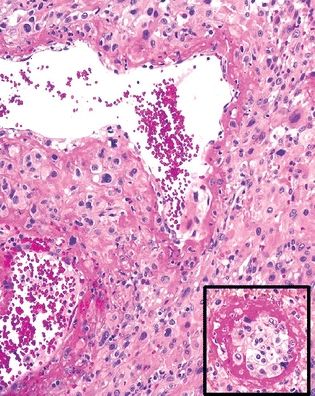