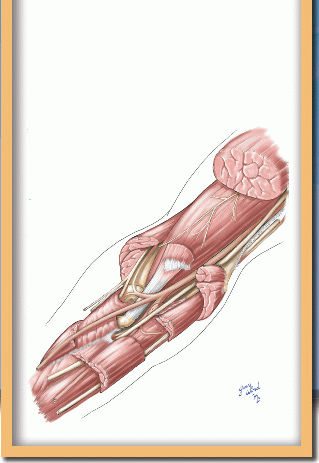 Forearm Vessels
Surgical Anatomy of the Forearm
The major nerves and arteries of the forearm run parallel with the two major muscle groups and lie between their layers as they converge toward the wrist. The axial rotation that uniquely characterizes the forearm is associated with a spiral disposition of the flexor/pronator muscle group and extensor/supinator muscle group from medial to volar and from lateral to dorsal, respectively. Safe surgical approaches to the arteries require a good three-dimensional appreciation of the relationships between vessels, nerves, and muscles, particularly in the area of the cubital fossa.

Superficial Veins and Nerves
The superficial veins of the distal forearm are highly variable, but as they converge toward the antecubital space they assume a more predictable pattern (Fig. 7-1). The most constant vein in the distal forearm is the cephalic, which starts along the lateral prominence of the radius. Before continuing up the arm along the lateral side of the biceps, it divides in front of the biceps tendon. There it sends a major tributary, the median cubital vein, diagonally across the biceps tendon to join the basilic vein. The basilic vein is formed from the veins draining the medial forearm and penetrates the deep fascia on the medial side of the brachium. The basilic vein is separated from the underlying brachial artery and median nerve by the biceps tendon in the antecubital fossa and by the deep fascia in the distal brachium.


Two superficial nerves run the length of the volar forearm and provide cutaneous sensation for two-thirds of its circumference. The medial antebrachial cutaneous nerve originates from the medial cord of the brachial plexus and accompanies the brachial artery to the midbrachium. There it exits the deep fascia through the same opening
traversed by the basilic vein and travels down the forearm toward the ulnar side. The lateral antebrachial cutaneous nerve is a continuation of the musculocutaneous nerve which innervated the biceps. This nerve emerges lateral to the biceps tendon, divides into two branches, and runs over the brachioradialis down the radial side of the forearm in the subcutaneous plane. Both of these nerves are subject to injury during venipuncture of the antecubital veins.


The remaining strip of extensor forearm is innervated by the posterior antebrachial cutaneous nerve (Fig. 7-2). This nerve arises from the radial nerve in the spiral groove and becomes subcutaneous at the lateral border of the triceps tendon. It passes behind the lateral epicondyle to reach the dorsal forearm.

Bony Anatomy and Muscle Overview
By virtue of its proximal and distal articulations, the radius is capable of virtually 180° rotation at its distal end (Fig. 7-3). Both the intrinsic supinator and pronators between radius and ulna and the major muscle groups effect this dramatic motion. The twoheaded pronator teres acts proximally, and the flat pronator quadratus acts distally between the radius and ulna. The supinator wraps around the proximal radius from its origin on the posterior ulna.
Two large muscle groups, each arising from an epicondyle-based common tendon, dominate the forearm. The flexor/pronator group arises from the medial epicondyle of the humerus and fans out across the volar forearm. Beneath this group, a deep layer of flexor muscles arises from the radius, ulna, and interosseous membrane. The extensor/supinator muscle complex arises from the lateral epicondyle of the humerus and extends toward the dorsum of the wrist. It, too, overlies a deeper layer. Two additional muscles, the brachioradialis and extensor carpi radialis longus, are anatomically transitional between these two groups but are properly associated with the extensor group by virtue of their radial nerve innervation. Between the
brachioradialis and flexor muscles proximally is the deep cubital fossa.


The forearm is wrapped in a firm layer of deep fascia continuous with the fascia of the brachium. This is thickened around the biceps tendon, at the epicondyles, and at the wrist where it forms the dorsal and volar retinacula. In addition, there are septa from the deep fascia to the radius and ulna. This compartmentalization is completed by the dense interosseous membrane.

The Flexors
In the floor of the cubital fossa, the broad brachialis muscle converges to insert onto the proximal ulna (Fig. 7-4). The biceps tendon passes over the brachialis to reach the radial tuberosity which is virtually in the midline. A fascial expansion of the biceps tendon, the bicipital aponeurosis, extends down the medial forearm to spread over the proximal flexor muscles.

The proximal flexor muscles lie on the medial side of the brachialis and biceps insertions. The deepest layer consists of flexor digitorum profundus and flexor pollicis longus. The flexor digitorum superficialis (FDS) which has humeral, ulnar, and radial origins is interposed as an intermediate layer. The most superficial layer consists of the muscles with a common origin at the medial epicondyle, including the pronator teres (Fig. 7-5).

Intermediate and Extensor Groups
The brachioradialis and extensor carpi radialis longus originate from the lateral supracondylar line of the humerus and the lateral intermuscular septum. They run in a direct line down the lateral side of the arm and are innervated at their proximal end by the radial nerve.


The dorsum of the forearm is also covered by a superficial group with a common epicondylar origin and a deep layer beneath (Fig. 7-6). An interesting feature of the dorsal forearm muscles is the interdigitation of the specialized thumb muscles with the other muscles of the extensor group.

The Arteries and Nerves
Like the popliteal artery at the knee, the brachial artery is the single major trunk supplying the distal extremity (Fig. 7-7). The artery bifurcates at the level of the radial tuberosity into radial and ulnar branches. The radial branch is the more direct continuation of the brachial artery, while the larger ulnar artery takes off at almost a right angle to the parent vessel. Immediately after its origin the ulnar artery gives off a short common interosseous branch which bifurcates at the hiatus in the proximal interosseous membrane. The dorsal and volar interosseous branches run on either side of the membrane to supply the deep muscles of each compartment.


The proximal radial and ulnar arteries give rise to recurrent collateral branches which anastomose with brachial tributaries around the elbow. The radial recurrent artery joins the radial collateral branch of the profunda brachii along the course of the radial nerve. The anterior and posterior ulnar recurrent vessels join the inferior and superior ulnar collateral branches of the brachial artery anterior and posterior to the medial epicondyle. An additional collateral artery, the interosseous recurrent, arises from the common interosseous artery and passes dorsal to the radius to join the
posterior branch of the profunda brachii as well as a branch of the inferior ulnar collateral artery.
The distal radial artery lies close to the superficial branch of the radial nerve, and the distal ulnar artery is joined by the ulnar nerve. The median nerve follows a central route down the forearm. A deep branch of the median nerve accompanies the anterior interosseous artery (AIA), and the posterior interosseous branch of the radial nerve passes through the supinator around the neck of the radius to reach the posterior interosseous artery and extensor muscles.
The Cubital Fossa
The relationship of the arteries to the surrounding muscles and nerves becomes somewhat complex in the depths of the cubital fossa (Fig. 7-8). Two elements of the regional anatomy are the keys to understanding the disposition of the forearm vessels. One is the structure of the pronator teres muscle, and the other is the structure of the FDS.


The pronator teres muscle arises from two heads. The humeral head is the most cephalad of the muscles originating from the common flexor tendon at the medial epicondyle. The ulnar head originates from the ulna lateral to the insertion of the brachialis muscle. This deep head rises between the median nerve and the ulnar artery to join the humeral head and separates the two structures. At the same time, it creates an isolated cleft through which the median nerve passes. The muscle is thus united as it passes over the ulnar artery. It then passes under the radial artery on its way to inserting on the lateral border of the midradius.
The FDS forms an intermediate muscle layer in the forearm. It has two origins medially, one from
the common tendon at the medial humeral epicondyle and the second from the ulna lateral to the brachialis insertion just cephalad to the origin of the deep pronator head. The broad lateral origin runs along the anterior radius between the insertion of the supinator and the origin of the flexor pollicis longus. The inverted arc formed by the junction of the heads is the gateway through which the ulnar artery and median nerve pass to reach the plane between the flexors digitorum superficialis and profundus. Near this arch, the artery and nerve reverse positions from medial to lateral. Also beneath this arch, the interosseous vessels and anterior interosseous nerve pass toward the interosseous membrane.


The courses of the superficial radial nerve, radial artery, and ulnar nerve are relatively straightforward as the following description demonstrates.
The Distal Forearm
The radial artery in the midforearm lies beneath the medial border of the brachioradialis muscle (Fig. 7-9). The ulnar artery becomes superficial in
the distal forearm at the lateral border of the FDS. The ulnar nerve is covered along most of its course by the FCU. The median nerve traverses the forearm between the FDS and flexor digitorum profundus.
Near the wrist the radial artery becomes superficial, lying anterior to the radius and pronator quadratus, between the tendons of brachioradialis and flexor carpi radialis (Fig. 7-10). The ulnar artery and nerve are accessible on the radial side of the tendon of the FCU. The median nerve is found ulnar to the tendon of flexor carpi radialis between the tendons of the flexor pollicis longus and flexor digitorum profundus.

Exposure of Arteries in the Forearm
The superficial location of the radial and brachial arteries makes them ideal sites for arterial catheterization and for establishment of hemodialysis access. The radial artery is a common site of catheterization for indwelling arterial lines and for insertion of catheters during interventional radiologic procedures.1,2,3 Radial artery occlusion occurs in 5% to 25% of patients undergoing these procedures,4,5 but radial artery thrombosis does not usually lead to hand gangrene. Radial artery catheterization has a reported incidence of permanent hand ischemia of 0.09%;1 in most cases, digital gangrene is thought to occur as a result of embolization from the site of initial arterial thrombosis.6
Only gold members can continue reading. Log In or Register to continue

Tags: Anatomic Exposures in Vascular Surgery
May 22, 2016 | Posted by drzezo in ANATOMY | Comments Off on Forearm Vessels
Premium Wordpress Themes by UFO Themes
WordPress theme by UFO themes
%d bloggers like this: