A 22-year-old man was hit in the eye with a baseball and presented to the emergency department with eye pain and redness and decreased visual acuity. There was a collection of blood in his anterior chamber (Figure 24-1) and he was diagnosed with a hyphema. He was given an eye shield for protection, advised to take acetaminophen for pain, and counseled not to engage in sporting activities until his hyphema resolved. He saw his physician daily for the next 2 days, during which his vision improved. His hyphema resolved in 5 days. 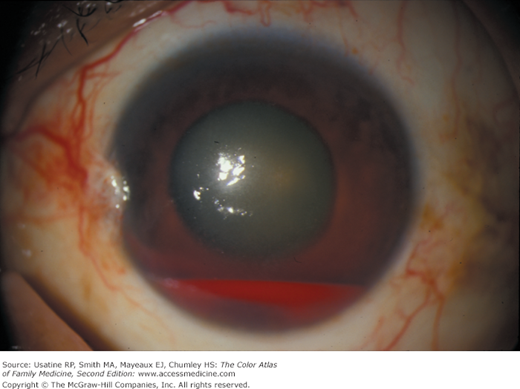 Hyphema, blood in the anterior chamber, can be seen following eye trauma or as a result of clotting disturbances, vascular abnormalities, or mass effects from neoplasms. Traumatic hyphema occurs more often in boys and men, often related to work or sports. Hyphema typically resolves in 5 to 7 days, but some cases are complicated by rebleeding.

The diagnosis of hyphema is clinical, depending on the classic appearance of blood layering in the anterior chamber. 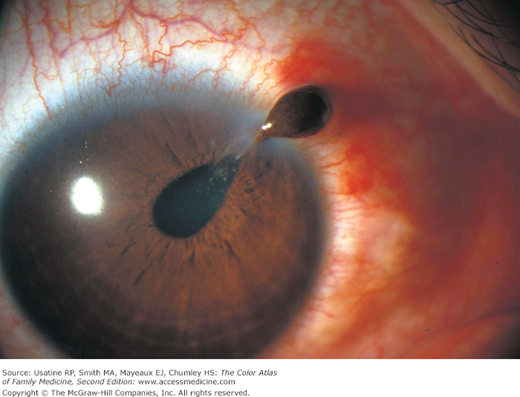 This young patient was hit in the eye with the corner of a laminated name card. The sharp edge perforated the cornea and pulled a portion of the iris out of the wound. Note the abnormal configuration of the pupil (dyscoria). No hyphema noted. This patient required emergent surgical repair. (Reprinted with permission from Lo MW, Chalfin S. Retrobulbar anesthesia for repair of ruptured globes. Am J Ophthalmol. 1997;123(6):833-835. Photo by Paul D. Comeau.)