Clinical Pharmacology of the Antihelminthic Drugs

Clinical Pharmacology of the Antihelminthic Drugs

A 29-year-old Peruvian man presents with the incidental finding of a 10 by 8 by 8 cm liver cyst on an abdominal computed tomography (CT) scan. The patient had noted 2 days of abdominal pain and fever, and his clinical evaluation and CT scan were consistent with appendicitis. His clinical findings resolved after laparoscopic appendectomy. Ten years ago, the patient immigrated to the United States from a rural area of Peru where his family trades in sheepskins. His father and sister have undergone resection of abdominal masses, but details of their diagnoses are unavailable. What is your differential diagnosis? What are your diagnostic and therapeutic plans?

Helminths (worms) are multicellular organisms that infect very large numbers of humans and cause a broad range of diseases. Over 1 billion people are infected with intestinal nematodes, and many millions are infected with filarial nematodes, flukes, and tapeworms. They are also a large problem in domestic animals. Many drugs, directed against a number of different targets, are available to treat helminthic infections. In many cases, especially in the developing world, the goal is control of infection, with elimination of most parasites, alleviating disease symptoms, and decreasing the transmission of infection. In other cases, complete elimination of parasites is the goal of therapy, although this goal can be challenging with certain helminthic infections, because of both limited efficacy of drugs and frequent reinfection after therapy in endemic areas.

Table 53–1 lists the major helminthic infections and provides a guide to the drug of choice and alternative drugs for each infection. In the text that follows, these drugs are arranged alphabetically. In general, parasites should be identified before treatment is started.

TABLE 53–1 Drugs for the treatment of helminthic infections.1 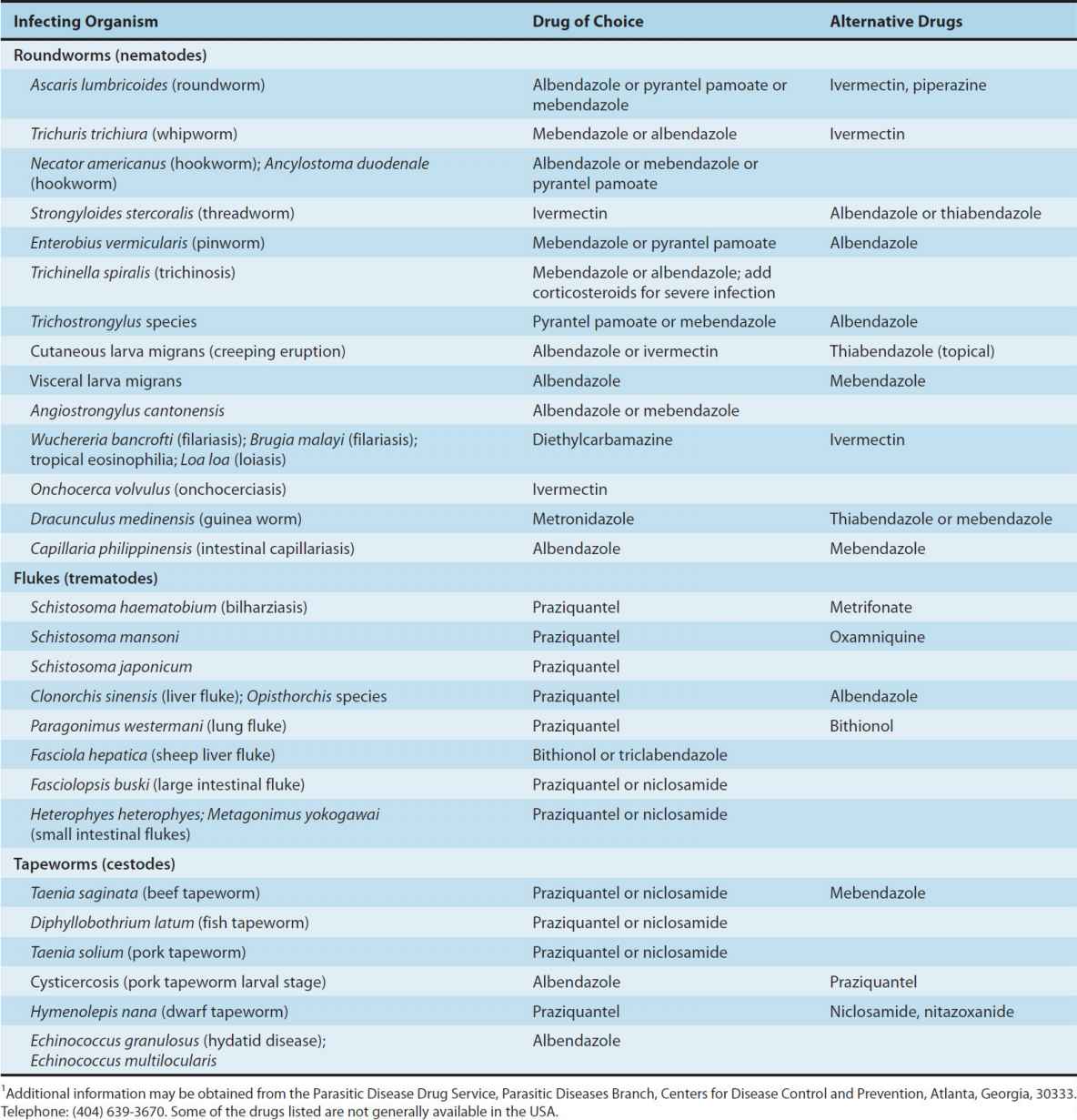 Albendazole, a broad-spectrum oral antihelminthic, is the drug of choice and is approved in the USA for treatment of hydatid disease and cysticercosis. It is also used in the treatment of pinworm and hookworm infections, ascariasis, trichuriasis, and strongyloidiasis.

Albendazole is a benzimidazole carbamate. After oral administration, it is erratically absorbed (increased with a fatty meal) and then rapidly undergoes first-pass metabolism in the liver to the active metabolite albendazole sulfoxide. It reaches variable maximum plasma concentrations about 3 hours after a 400 mg oral dose, and its plasma half-life is 8–12 hours. The sulfoxide is mostly protein-bound, distributes well to tissues, and enters bile, cerebrospinal fluid, and hydatid cysts. Albendazole metabolites are excreted in the urine.

2. Hydatid disease—Albendazole is the treatment of choice for medical therapy and is a useful adjunct to surgical removal or aspiration of cysts. It is more active against Echinococcus granulosus than against Echinococcus multilocularis. Dosing is 400 mg twice daily with meals for 1 month or longer. Daily therapy for up to 6 months has been well tolerated. One reported therapeutic strategy is to treat with albendazole and praziquantel, to assess response after 1 month or more and, depending on the response, to then manage the patient with continued chemotherapy or combined surgical and drug therapy.

3. Neurocysticercosis—Indications for medical therapy for neurocysticercosis are controversial, since antihelminthic therapy is not clearly superior to therapy with corticosteroids alone and may exacerbate neurologic disease. Therapy is probably most appropriate for symptomatic parenchymal or intraventricular cysts. Corticosteroids are usually given with the antihelminthic drug to decrease inflammation caused by dying organisms. Albendazole is now generally considered the drug of choice over praziquantel because of its shorter course, lower cost, improved penetration into the subarachnoid space, and increased drug levels (as opposed to decreased levels of praziquantel) when administered with corticosteroids. Albendazole is given in a dosage of 400 mg twice daily for up to 21 days.

When used for 1–3 days, albendazole is nearly free of significant adverse effects. Mild and transient epigastric distress, diarrhea, headache, nausea, dizziness, lassitude, and insomnia can occur. In long-term use for hydatid disease, albendazole is well tolerated, but it can cause abdominal distress, headaches, fever, fatigue, alopecia, increases in liver enzymes, and pancytopenia.

Blood counts and liver function should be monitored during long-term therapy. The drug should not be given to patients with known hypersensitivity to other benzimidazole drugs or to those with cirrhosis. The safety of albendazole in pregnancy and in children younger than 2 years has not been established.

After ingestion, bithionol reaches peak blood levels in 4–8 hours. Excretion appears to be mainly via the kidney.

For treatment of paragonimiasis and fascioliasis, the dosage of bithionol is 30–50 mg/kg in two or three divided doses, given orally after meals on alternate days for 10–15 doses. For pulmonary paragonimiasis, cure rates are over 90%. For cerebral paragonimiasis, repeat courses may be necessary.

Adverse effects, which occur in up to 40% of patients, are generally mild and transient, but occasionally their severity requires interruption of therapy. These problems include diarrhea, abdominal cramps, anorexia, nausea, vomiting, dizziness, and headache. Skin rashes may occur after a week or more of therapy, suggesting a reaction to antigens released from dying worms. Bithionol should be used with caution in children younger than 8 years because there has been limited experience in this age group.

Diethylcarbamazine, a synthetic piperazine derivative, is rapidly absorbed from the gastrointestinal tract; after a 0.5 mg/kg dose, peak plasma levels are reached within 1–2 hours. The plasma half-life is 2–3 hours in the presence of acidic urine but about 10 hours if the urine is alkaline, a Henderson-Hasselbalch trapping effect (see Chapter 1). The drug rapidly equilibrates with all tissues except fat. It is excreted, principally in the urine, as unchanged drug and the N-oxide metabolite. Dosage should be reduced in patients with renal impairment.

Diethylcarbamazine immobilizes microfilariae and alters their surface structure, displacing them from tissues and making them more susceptible to destruction by host defense mechanisms. The mode of action against adult worms is unknown.

The drug should be taken after meals.

1. Wuchereria bancrofti, Brugia malayi, Brugia timori, and Loa loa—Diethylcarbamazine is the drug of choice for treatment of infections with these parasites because of its efficacy and lack of serious toxicity. Microfilariae of all species are rapidly killed; adult parasites are killed more slowly, often requiring several courses of treatment. The drug is highly effective against adult L loa. The extent to which W bancrofti and B malayi adults are killed is not known, but after appropriate therapy microfilariae do not reappear in the majority of patients. Lymphatic filariasis is treated with 2 mg/kg three times a day for 12 days, and loiasis is treated with the same regimen for 2–3 weeks. Antihistamines may be given for the first few days of therapy to limit allergic reactions, and corticosteroids should be started and doses of diethylcarbamazine lowered or interrupted if severe reactions occur. Cures may require several courses of treatment. For patients with high L loa worm burdens (more than 2500 circulating parasites/mL), strategies to decrease risks of severe toxicity include (a) apheresis, if available, to remove microfilariae before treatment with diethycarbamazine, or (b) therapy with albendazole, which is slower acting and better tolerated, followed by therapy with diethylcarbamazine or ivermectin. Diethylcarbamazine may also be used for chemoprophylaxis against filarial infections (300 mg weekly or 300 mg on 3 successive days each month for loiasis; 50 mg monthly for bancroftian and Malayan filariasis).

2. Other uses—For tropical eosinophilia, diethylcarbamazine is given orally at a dosage of 2 mg/kg three times daily for 2–3 weeks. Diethylcarbamazine is effective in Mansonella streptocerca infections, since it kills both adults and microfilariae. Limited information suggests that the drug is not effective, however, against adult Mansonella ozzardi or Mansonella perstans and that it has limited activity against microfilariae of these parasites. An important application of diethylcarbamazine has been mass treatment to reduce the prevalence of W bancrofti infection, generally in combination with ivermectin or albendazole. This strategy has led to excellent progress in disease control in a number of countries.

Reactions to diethylcarbamazine, which are generally mild and transient, include headache, malaise, anorexia, weakness, nausea, vomiting, and dizziness. Adverse effects also occur as a result of the release of proteins from dying microfilariae or adult worms. Reactions are particularly severe with onchocerciasis, but diethylcarbamazine is no longer commonly used for this infection, because ivermectin is equally efficacious and less toxic. Reactions to dying microfilariae are usually mild in W bancrofti, more intense in B malayi, and occasionally severe in L loa infections. Reactions include fever, malaise, papular rash, headache, gastrointestinal symptoms, cough, chest pain, and muscle or joint pain. Leukocytosis is common and eosinophilia may increase with treatment. Proteinuria may also occur. Symptoms are most likely to occur in patients with heavy loads of microfilariae. Retinal hemorrhages and, rarely, encephalopathy have been described. Local reactions may occur in the vicinity of dying adult or immature worms. These include lymphangitis with localized swellings in W bancrofti and B malayi, small wheals in the skin in L loa, and flat papules in M streptocerca infections. Patients with attacks of lymphangitis due to W bancrofti or B malayi should be treated during a quiescent period between attacks. Caution is advised when using diethylcarbamazine in patients with hypertension or renal disease.

This tetracycline antibiotic is described in more detail in Chapter 44. Doxycycline has recently been shown to have significant macrofilaricidal activity against W bancrofti, suggesting better activity than any other available drug against adult worms. Activity is also seen against onchocerciasis. Doxycycline acts indirectly, by killing Wolbachia, an intracellular bacterial symbiont of filarial parasites. It may prove to be an important drug for filariasis, both for treatment of active disease and in mass chemotherapy campaigns.

Ivermectin is the drug of choice in strongyloidiasis and onchocerciasis. It is also an alternative drug for a number of other helminthic infections (Table 53-1).

Ivermectin, a semisynthetic macrocyclic lactone derived from the soil actinomycete Streptomyces avermitilis, is a mixture of avermectin B1a and B1b. Ivermectin is available only for oral administration in humans. The drug is rapidly absorbed, reaching maximum plasma concentrations 4 hours after a 12 mg dose. Ivermectin has a wide tissue distribution and a volume of distribution of about 50 L. Its half-life is about 16 hours. Excretion of the drug and its metabolites is almost exclusively in the feces.