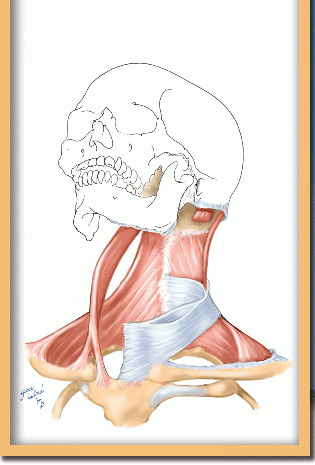 Carotid Arteries
Surgical Anatomy of the Neck
In the neck, nature has ingeniously compacted an intricate complex of vital structures and enfolded them on three sides with muscle and bone. It is possible to master this daunting array of anatomy if one conceptualizes the neck in a systematic way. There is a central visceral column containing the digestive and respiratory passages and the thyroid gland (Fig. 1-1). Posteriorly, the visceral compartment is bounded by the main structural element of the neck, the cervical spine, and its supporting struts of muscle. On either side of the visceral cylinder, the large, axial neurovascular structures of the neck pass between the head and the superior thoracic aperture enclosed in the loose, areolar carotid sheath. Wrapped around these central neck elements, like the spiral sheath of an electrical cable, are the strong, flat trapezius and sternocleidomastoid muscles. In the context of these structural groupings, it is now possible to make some sense of the fascial layers of the neck.


The Prevertebral Fascia
The supple cervical spine is surrounded by a central group of muscles attached to the ribs, to the base of the skull, and to adjacent vertebrae (Fig. 1-2). These include small intrinsic muscles and powerful erector spinae muscles posteriorly, the small longus colli and longus capitis muscles anteriorly, and the levator scapulae and scalene muscles laterally. This paraspinal grouping is wrapped in a discrete fibrous layer called the prevertebral fascia. Anteriorly, this fascia runs from the base of the skull down the vertebral bodies to blend with the anterior longitudinal ligament of the thoracic spine. Posteriorly, it attaches along a midline seam to the ligamentum nuchae of the cervical spinous processes. The prevertebral fascia covers the origins of the cervical nerves and the phrenic nerve arising from them. At the base of the neck, the prevertebral fascia takes a more complex form. Fanning out laterally, it covers the roots of the brachial plexus and the subclavian artery and forms a neurovascular wrap called the axillary sheath. The visceral components of the neck lie along the center of this delta-shaped anterior sheet of prevertebral fascia.


The Visceral Fascia
In the central neck, the roughly cylindrical visceral compartment is surrounded by a thin layer of fascia called pretracheal fascia in front and buccopharyngeal fascia behind (Fig. 1-3). The strap muscles are also enclosed within the lamellae of this layer. The portion of visceral fascia around the strap muscles has also been called the middle cervical fascia. The plane between the buccopharyngeal fascia and the prevertebral fascia is a highway for spread of air and GI contents between neck and mediastinum after esophageal injury. A variable midline adhesion between the two fascial layers may limit spread of abnormal contents to some extent.


The Investing Fascia
Wrapping the neck into a neat bundle is the best defined and most superficial layer of the deep fascia, the investing fascia (Fig. 1-4). It attaches to the ligamentum nuchae in the posterior midline and splits to invest the trapezius and sternocleidomastoid muscles within its laminae. The investing fascia forms a complete sheath, with its upper margin skirting the posterior base of the skull, the zygomatic arch, and the lower border of the mandible. The lower margin attaches to sternum, clavicle, acromion, and the spine of the scapula. The parotid and submaxillary glands are also enclosed within layers of this fascia.


The flat sternocleidomastoid muscles form the final, lateral boundary of the space containing the carotid sheath.

The Carotid Sheath
The carotid sheath is best thought of as an aggregation of connective tissue filling a long cleft with a triangular cross section. The boundaries of this cleft consist of the visceral compartment medially, the prevertebral fascia posteriorly, and the sternocleidomastoid muscle anterolaterally (Fig. 1-5). The sheath is not a discrete fascial sheet like the investing fascia. It surrounds the carotid artery, the internal jugular vein, and the vagus nerve. Because of the amorphous nature of this “sheath,” a path to any of the enclosed structures can be dissected with minimal disturbance to the adjacent structures.

The Superficial Fascia
The superficial fascia of the neck contains two flat sheets of muscle, the platysma (Fig. 1-6). These muscles represent the remnant of the more extensive panniculus carnosus of other mammals with which they shake their coats. The muscles of facial expression are specialized modifications of this layer.


Cutaneous nerves and superficial veins lie in the well-defined cleavage plane between the platysma and the investing fascia. A cross section of the neck at the level of the thyroid cartilage (Fig. 1-7) demonstrates the relationships of these and the other fascia-bound anatomic groupings. With this background, the remainder of the chapter focuses on the carotid artery and its relationship to surrounding structures.

A normally positioned carotid bifurcation is readily accessible in the carotid triangle bounded by the sternocleidomastoid muscle, the posterior belly of the digastric muscle, and the anterior belly of the omohyoid muscle. The area between the carotid bifurcation and the base of the skull is a dense intertwining tangle of vessels, nerves, and muscles packed into a confined space behind the mandibular ramus. This is especially true of the anatomy surrounding the distal internal carotid artery. In order to ensure a safe surgical approach to this artery, a thorough grasp of its relationships is essential. The overall pattern of individual vessels and nerves in the neck will be considered first, followed by an in-depth look at the carotid triangle.


The Nerves of the Neck
There are three groups of nerves in the neck: the cranial nerves, the nerves of the cervical plexus, and the nerves of the brachial plexus (Fig. 1-10). Only the first group is of major concern when considering approaches to the distal carotid artery. Of the cranial nerves, the facial (VII), glossopharyngeal (IX), vagus (X), spinal accessory (XI), and hypoglossal (XII) are intimately related to the distal internal carotid artery and are discussed further below. In the midneck, the vagus, cervical sympathetic chain, and ansa cervicalis (also called ansa hypoglossi) share the carotid sheath. The cutaneous branches of the cervical plexus emerge from the prevertebral fascia deep to the sternocleidomastoid muscle and then pierce the investing fascia at the posterior border of that muscle.


The nerve roots of the brachial plexus emerge between the anterior and middle scalene muscles and lie lateral to the course of the common carotid arteries. This relationship is examined in more detail in Chapter 4.
The final key to understanding the approach to the carotid bifurcation and internal carotid artery is knowing the relationships of the pharynx, the cranial nerves mentioned above, the vessels, and the ramus of the mandible.

The Pharynx
The focal point of the posterior suspension of the pharynx from the base of the skull is the styloid process (Fig. 1-11). The stylohyoid ligament, styloglossus, stylopharyngeus, and stylohyoid muscles originate on this bony spine and attach in a fanshaped pattern to the upper pharyngeal wall and hyoid bone. The digastric muscle provides additional support. Interleaved among these structures are the carotid and jugular arborizations and the cranial nerves.


The Distal Jugular Vein
Just outside the jugular foramen, the internal jugular vein lies between the internal carotid artery and the root of the styloid process (Fig. 1-13). The retromandibular and facial branches of the common facial vein lie superficial to the digastric and stylohyoid muscles. However, cephalad to the stylohyoid muscle, the retromandibular vein and external carotid artery pass between the parotid gland and the ramus of the mandible, a relationship usually described as being within the substance of the parotid gland. Both vessels lie deep to the branches of the facial nerve fanning out through the parotid.


The Cranial Nerves
The immediate extracranial portions of the cranial nerves mentioned above intertwine with the muscular and vascular structures we have been discussing, putting them at risk for injury during carotid surgery (Fig. 1-14). Although most iatrogenic nerve injuries resulting from carotid surgery are temporary and subtle, careful examination will reveal such injuries in 5% to 21% of patients.1,2,3,4,


Only gold members can continue reading. Log In or Register to continue

Tags: Anatomic Exposures in Vascular Surgery
May 22, 2016 | Posted by drzezo in ANATOMY | Comments Off on Carotid Arteries
Premium Wordpress Themes by UFO Themes
WordPress theme by UFO themes
%d bloggers like this: