3.  A tumor is removed from the third proximal phalanx of a 25-year-old man who presented with pain. The tumor expands the metaphyseal bone and produces thinning of the cortex but does not penetrate into surrounding soft tissues. Its microscopic appearance is shown in this picture. A condition characterized by numerous tumors as this one and soft tissue hemangiomas is known as: 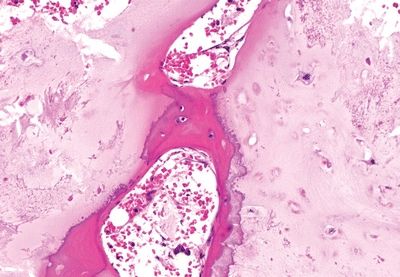 4.  A 25-year-old man presents with an enlarging mass in the left fifth finger, accompanied by pain and limitation of motion. A radiograph revealed a calcified mass attached to the surface of the middle phalanx, but not continuous with the medullary cavity of the bone. The mass is removed. H&E sections reveal a lesion consisting of cartilage, irregular areas of bone with a strikingly dark blue color, and haphazardly arranged spindle cells between bone trabeculae. The cartilage is hypercellular with nests of binucleated, bizarre chondrocytes. The spindle cell population shows no atypical features. These features are most consistent with:

5.  A 15-year-old boy comes to medical attention because of persistent dull pain in the lower right thigh, not relieved by anti-inflammatory drugs. X-rays reveal a well-demarcated peripheral lytic defect in the distal femur. Excised, the lesion appears composed of lobules of hyaline cartilage with stellate and spindle cells within a myxoid matrix. These lobules are separated by densely cellular fibroblastic bands, giving rise to a biphasic pattern. Scattered osteoclast-like giant cells are present. Mitotic figures are not found. Which of the following is the most likely diagnosis?

6.  A 15-year-old male has a bone lesion in the distal epiphysis of his right femur. The lesion appears as well-demarcated area of radiolucency, rimmed by sclerotic bone and extending to the articular cartilage. A biopsy reveals a highly cellular tumor composed of uniform polygonal chondroblast-like cells intermixed with giant cells within a cartilaginous and osteoid matrix, as shown in this picture. Radiologic presentation and histologic features are most consistent with: 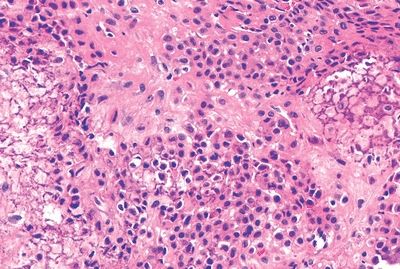 7.  Secondary central and secondary peripheral chondrosarcomas are morphologically identical to which of the following chondrosarcoma types?

8.  Which of the following is/are the most characteristic genetic alterations associated with enchondroma and chondrosarcomas?

A.  Mutations of the EXT1 or EXT2 genes

B.  Mutations of the H3F3A gene coding H3.3 histone

D.  Mutations of the IDH1 or IDH2 gene

9.  Which of the following is a correct statement concerning the grading of chondrosarcoma (CS)?

A.  Atypical cartilaginous tumor (ACT) will not recur after incomplete resection.

B.  ACT does not show encasement by a rim of reactive bone.

E.  Stage is a more important prognostic indicator than grade.

Questions 10–13: Match each of the following clinical presentations with the type of chondrosarcoma depicted in the photomicrographs

10.  A 35-year-old patient presents with a 6-cm lobulated mass on the cortex of the proximal metaphysis of the right humerus. Histologic examination reveals a lobulated tumor morphologically similar to conventional chondrosarcoma. It infiltrates the soft tissue and penetrates into the cortex of the bone without reaching the medullary cavity.

11.  A 60-year-old woman has a large lytic mass in the pelvis. Biopsy shows a biphasic morphologic pattern owing to the presence of two distinct tumor cell populations.

12.  A 20-year-old man presents with a rapidly growing soft tissue mass in the right lower extremity.

13.  A 35-year-old woman has a well-demarcated lytic mass in the proximal epiphysis of her right femur. Molecular analysis on the resected tumor does not reveal IDH mutations. After resection, the tumor recurred 1 year later, and the patient undergoes a second resection. Five years after diagnosis, the patient is tumor free. 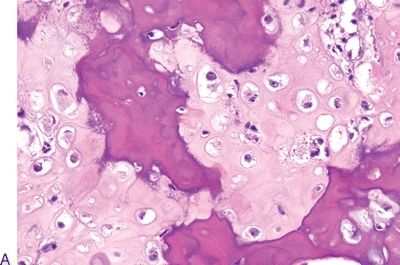 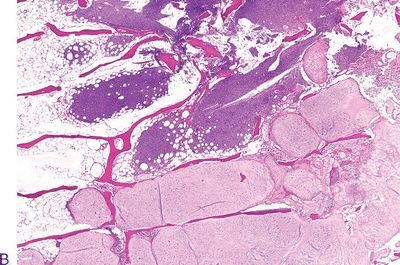 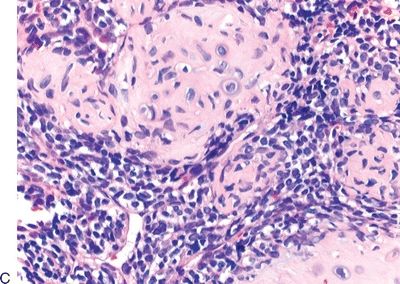 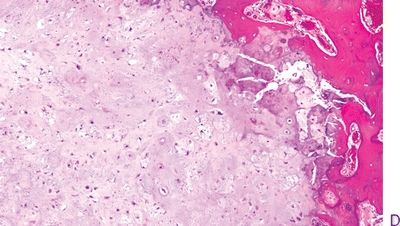 14.  In which of the following syndromes are multiple osteomas found?

15.  A 14-year-old male presents with a history of pain in the right leg that manifests at night and is promptly relieved by aspirin. A 1.5-cm radiolucent focus surrounded by an osteosclerotic rim is identified in the right tibia and excised. This photomicrograph demonstrates its histologic appearance. Which of the following is the most likely diagnosis? 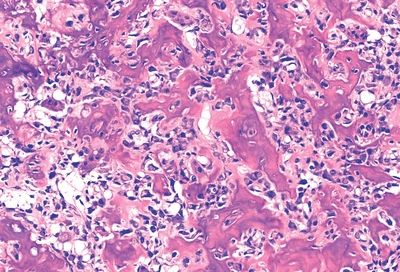 16.  Which of the following features is most important in supporting a diagnosis of osteosarcoma in an otherwise poorly differentiated mesenchymal tumor?

A.  Foci of cartilage

17.  Which of the following conditions is responsible for most cases of osteosarcomas arising in patients older than 45 years?

18.  A 25-year-old woman complains of bone pain around the knee. A radiograph reveals a lytic lesion in the proximal tibia. A biopsy of the lesion shows a tumor composed of a spindle cell population arranged in fascicles within a matrix containing osteoid. A differential diagnosis of low-grade central osteosarcoma, conventional osteosarcoma, fibrous dysplasia, and desmoplastic fibroma is entertained. Which of the following immunostains would be most helpful in differentiating this variant of osteosarcoma from the other lesions?

A.  Keratin and EMA

19.  This variant of osteosarcoma manifests as a slow-growing, extracortical, lobulated mass arising from the metaphyses of long bones in young adults, most often in the distal posterior femur. Its characteristic radiologic appearance is shown in this photograph. Which variant is it? 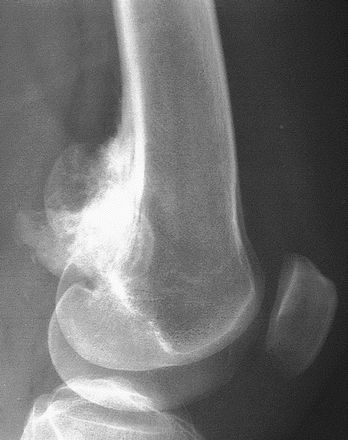 20.  Which of the following variants/types of osteosarcoma is considered intermediate grade?

21.  The diagnosis of osteosarcomas. Which of the following pairs of immunohistochemical markers have been recently found to have a high degree of sensitivity and specificity for bone-forming tumors?

A.  Actin and desmin

22.  A patient with osteosarcoma receives neoadjuvant chemotherapy before undergoing tumor resection. Which of the following parameters is the most important prognostic indicator in the resected tumor?

A.  Degree of cellular atypia

B.  Extent of necrosis

23.  Among the histologic types of conventional osteosarcoma is a high-grade variant characterized by increase in tumor matrix accompanied by “normalization” of cells (decreased atypia). Which of the following is it?

24.  Which of the following histologic types of conventional osteosarcoma is depicted in this photomicrograph? 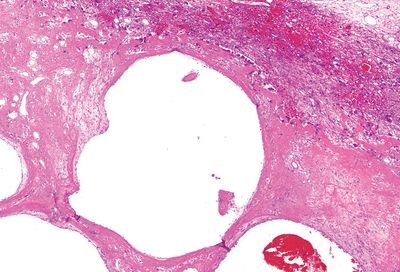 25.  Which of the following histologic types of conventional osteosarcoma has a slightly worse prognosis than the others?

26.  A 12-year-old boy complains of pain in the right thigh. X-ray studies show a radiolucent defect in the distal metaphysis of the right femur, as seen in this picture. On biopsy, this consists of a fibroblastic population arranged in a storiform pattern. Hemosiderin-laden macrophages and clusters of giant cells are also found. These features are most consistent with: 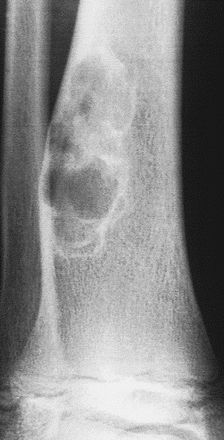 27.  This photomicrograph demonstrates the cytologic appearance of bone lesions detected in the skull and vertebral bones of a 60-year-old patient. The cells are immunoreactive for CD138 and MUM1. Which of the following is the most typical radiographic presentation of this condition? 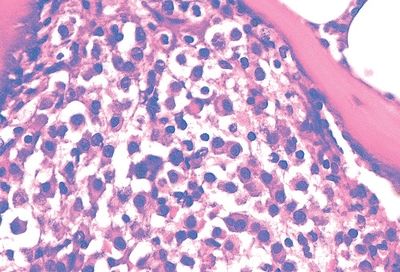 B.  Expansion of bone and thickening of the cortex

28.  A 35-year-old man undergoes resection of an osteolytic mass in the distal epiphysis of the right femur. Grossly, the mass is soft and contains multiple blood-filled cysts and brown deposits. Histologically, it has the appearance shown in this picture. These features are most consistent with: 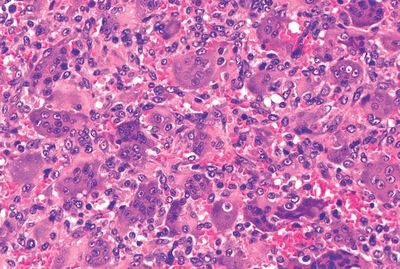 A.  Brown tumor of hyperparathyroidism