Schematic presentations of the origin of the negative charge on the HA surface (in case of the (100) projection of crystal structure), and the process of bonelike apatite formation thereon in SBF (Reproduced from Ref. [4] by permission of The Royal Society Interface)

HA, which shows a similar chemical composition and crystal structure as apatite in the human bone, has been used in clinical bone graft procedures for the past 25 years because of their high bone-bonding ability. Therefore, HA coating is one of the key techniques for the surface modification of metallic implants. Several techniques have been used to fabricate HA coatings on metallic implants, for example, plasma spraying, sputtering, slurry dipping, electrophoretic deposition, and biomimetic coating. Advantages and disadvantages of various methods for HA coatings on Ti–6Al–4V substrate are shown in Table 5.2, as reported by Mohseni et al. [5].

Reprinted from [5], Copyright 2014, with permission from Elsevier
The Food and Drug Administration (FDA) approves plasma spraying only as the HA coating technique. In a plasma-spraying method, ceramic powders are suspended into plasma flame, and then, the melted powders are sprayed on the surface of substrates. This method has advantages on rapid deposition rate and less risk of the thermal degradation than other high-temperature process. De Groot et al. firstly reported HA coatings on a titanium substrate by plasma-spraying technique [6]. In vivo tests showed that bone bonding to the HA coatings was almost the same as HA bulk ceramics. However, it is well known that the fracture occurs almost entirely at the interface between HA and metal substrate under push-out test condition. The plasma-sprayed coatings show poor adhesion strength between the coatings and substrates, compared with other coating techniques. The improvement of the strength is to use high spraying power because the coatings have a dense microstructure. It has been reported that the coatings showed a higher bonding strength by reduction in the residual stress originated from the substrate temperature and cooling condition [7]. For enhancing the mechanical properties of plasma-sprayed HA coatings, yttria-stabilized zirconia powders were mixed with HA powders as a starting material [8]. The bonding strength, fracture toughness, and Young’s modulus of the composite coatings were improved with increasing the zirconia content. This paper suggested that the molten state of zirconia particles plays an important role in increasing the mechanical properties of the composite coatings. Another report on alternative plasma spraying has shown that a thin and good adhesive HA coating on titanium substrate was successfully fabricated by pulsed laser deposition using sintered HA [9].
Sputtering, which is a physical vapor deposition method, utilizes gas plasma, such as argon, to remove materials from a target as a source and to deposit them as a thin film coating on a substrate. The sputtering can successfully fabricate homogeneous thin coatings with high adhesive strengths. On the other hand, it is well known that the sputtered coatings show a low crystallinity and a higher Ca/P ratio than stoichiometric HA. Van Dijk et al. reported thin HA coatings on titanium substrate by radiofrequency (RF) magnetron sputtering [10]. The annealing conditions played an important role in the change in crystalline phases of as-sputtered coatings. Addition of water vapor under the annealing using argon flow accelerated crystallization and phase transformation. The HA coating on Ti–6Al–4V substrate fabricated by sputtering showed the highest adhesion strength among those fabricated by common techniques [5].
Electrophoretic deposition (EPD) is one of the colloidal processing techniques using electrophoresis mechanism for moving charged particles in a suspension under electric fields. EPD shows advantages in fabrication of ceramic coatings having dense packing and homogeneous microstructure. Zhitomirsky et al. reported firstly that HA powders, which were prepared by a chemical precipitation, were successfully deposited by an EPD method using isopropyl alcohol as a solvent of the suspension on Ti–6Al–4V with anodic films [11]. Many works have been conducted on the sizes and morphology of HA, the conditions of the electric field, the concentration of the suspension, and the kinds of the solvent and dispersant for HA coatings prepared by EPD [12, 13]. EPD could successfully fabricate HA coatings with 90 μm in thickness on porous titanium substrate [14]. HA coatings on metallic titanium and stainless steel substrates prepared by an EPD and sintering showed more than 10 MPa of interfacial shear stress measured in accordance to ASTM standard F1044-87, indicating a good adhesion [15]. The shear strengths of the HA coating on the stainless steel were higher than those on the metallic titanium because of the less damaging effect derived from residual stress after sintering.
It has been reported that porous structure of HA coatings is one of the important keys for improving the fixation of implant through bone ingrowth into their pores [16]. HA coatings with controlled porosity on 316L stainless steel were prepared by an EPD using carbon black particles as a porogen [17]. In isopropanol as a solvent of suspension, HA/carbon black composite particle showed net positive surface charge by heterocoagulation of the HA nanoparticles with positive charge on carbon black particles with negative charge. The deposition rate depended on the concentration of carbon black in the suspension. The microstructures of the coatings deposited from the suspension before and after sintering were changed under the condition of the suspension, as shown in Fig. 5.2. In the case of EPD coating without sacrificial phases, the control of pore size and porosity in the coatings is limited. When sacrificial phases are used in the EPD method, the porous properties of the coatings can be controlled by changes in the particle size distribution of particles as sacrificial phases and their concentration in the suspension. 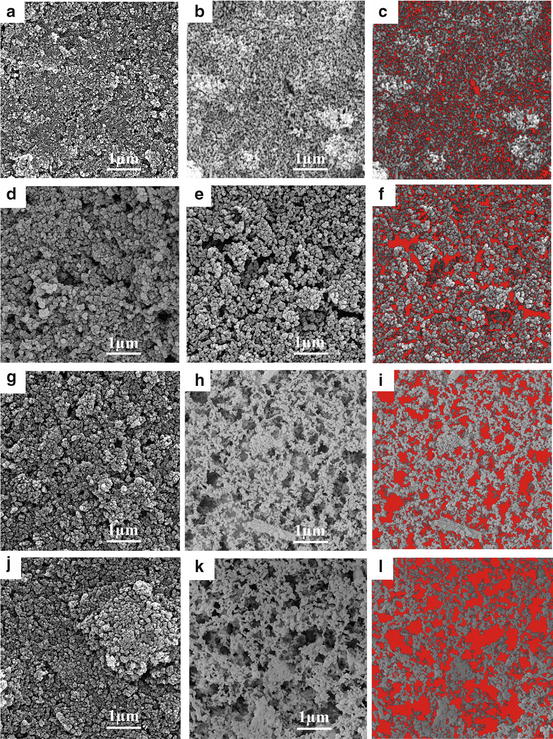 SEM images of the coatings deposited at 60 V and 30 s from suspensions with 20 g/L HA and different concentration of carbon black particles: 0 g/L (a–c), 5 g/L (d–f), 10 g/L (g–i), and 20 g/L (j–l) before sintering (a, d, g, and j) and after sintering at 700 °C for 1 h (b, e, h, and k). (c, f, i, and l) are the results obtained from the image analyzing of (b, e, h, and k), respectively (Reprinted from [17], Copyright 2014, with permission from Elsevier)
EPD method is attracting increasing attention as an effective coating technique using functional biopolymer, for example, chitosan and alginate, at room temperature. The composite coatings consisting of alginate and Bioglass® have been reported to be successfully fabricated on 316L stainless steel by using direct current and alternating current in an EPD method [18]. The preparation of composites consisting of bioactive ceramics and biopolymer by EPD is well established, as reviewed elsewhere [19].

Much attention has been paid to HCA as a novel biomaterial, since HCA is very similar to the apatite phase in living bone in its chemical composition and crystal structure and shows high osteoconductivity, as well as good bioresorbability [20]. This has been introduced as a preparation method for HCA coating on the metals, polymers, and ceramics based on immersion in SBF, termed “a biomimetic method” [21, 22].
This method has an advantage over conventional coating techniques in the materials that can be homogeneously coated with nano-sized HCA without the need of a heating process. Two indispensable conditions are needed for the formation of HCA coating on materials using SBF as follows [23]:

Existence of surface functional groups that induce nucleation of HCA, for example, Si–OH, Ti–OH, and COOH
2.

Increase in the supersaturation of HCA in SBF
HCA coatings have been successfully fabricated on commercially metallic titanium after at least 1 week of soaking in SBF utilizing Ti–OH groups on the surface [24]. SBF concentrated more than five times with CO2 gas has been prepared to accelerate HCA coating process [25]. The use of SBF × 5 can deposit homogeneous calcium phosphate coating within 1 day. Table 5.3 shows kinetic study and precipitate phases of the formed coatings using various SBFs. Mg2+ ion was a stronger inhibitor for HCA formation than carbonate ion under the SBF × 5 condition.

Kinetics of precipitation and coating formations of the various experiments


Reprinted from [25], Copyright 2014, with permission from Elsevier
aDCPD: brushite
bAmCO3-CaP: amorphous carbonated CaP
cCO3-Ap: carbonated apatite
The HCA coating process using SBF can be also applicable to polymer substrates. Tanahashi et al. have succeeded in dense and uniform HCA coating with more than 3 MPa of adhesive strength on poly(ethylene terephthalate) (PET), polyether sulfone, and poly(vinyl alcohol) hydrogel [26]. This process has two steps, as shown in Fig. 5.3. A polymer substrate, which was in contact with CaO–SiO2 glass particles, was soaked in SBF for forming HCA nuclei on the substrates. And then, the treated substrate was soaked in 1.5 times SBF for the growth of HCA nucleus. Individual constituents’ fine fibers consisting of PET could be uniformly coated with HCA layer. This had flexibility without peeling off the HCA coating.

Biomimetic methods for forming the bonelike apatite layer on various substrates (Reprinted with permission from Ref. [26], Copyright 1994, American Ceramic Society)
Another HCA coating method has been also reported to use calcium carbonate particles of vaterite crystalline structure combined with a biomimetic method. Homogeneous vaterite particles with around 0.5 μm in diameter were deposits on the surface of different polymer substrates, such as ligaments and 3-D macroporous foams, by a slurry dipping technique using ethanol as a solvent, as shown in Fig. 5.4. The polymer substrates covered with a HCA layer were prepared by soaking of the polymer/vaterite composites in SBF within 7 days. This method can induce HCA coatings for surface modification of various polymers, for example, poly(ɛ-caprolactone), poly(DL-lactide), and polyester [27, 28].

SEM images of vaterite/PDLLA composite foams prepared using ethanol slurry dipping process, after immersion in SBF for 7 days showing formation of the HCA layer at (a) low, (b) medium, and (c) high magnification (Reprinted from Ref. [27], with kind permission from Springer Science + Business Media)
In the series of synthetic calcium phosphate ceramics, many researchers have investigated on β-tricalcium phosphate (β-TCP) and biphasic calcium phosphate (BCP) because they show bioactivity and higher solubility compared with HA. BCP is a mixture of HA and β-TCP, and their solubility depends on the β-TCP/HA ratio [29]. β-TCP or BCP coatings are successfully fabricated by plasma spraying and RF magnetron sputtering [30, 31]. Bone formation has been observed at the surface of these coatings in vivo.

Wollastonite (CaSiO3) has been investigated on bone substitutes for more than 20 years because of its excellent biocompatibility. Moreover, wollastonite shows higher HCA-forming ability in SBF than bioactive glasses [32]. Porous wollastonite CaSiO3 ceramics have been also reported to be superior to β-TCP in terms of degradability and inducing bone formation in vivo [33]. Wollastonite coatings containing amorphous phase on titanium alloys were fabricated by atmosphere plasma spraying [34]. Figure 5.5 shows SEM micrographs of as-sprayed wollastonite coatings. The coatings had microcracks, pores with several tens micrometer in size, and rough surfaces without cracks between coatings and substrate. HCA formed on the coatings after 1 day of soaking in SBF.

SEM photographs of as-sprayed wollastonite coatings: (a) and (b) surface morphology; (c) cross section (Reprinted from [34], Copyright 2014, with permission from Elsevier)
Dicalcium silicate (Ca2SiO4) coatings on titanium alloys by plasma spraying show a higher bonding to the substrate than HA coatings [35]. That is, dicalcium silicate acts as a bond coat to improve the bonding strength between HA coatings and titanium alloys. When γ-Ca2SiO4 is used as a coating material on Ti–6Al–4V, as-plasma-sprayed coatings consist of β-Ca2SiO4 and glassy phase and have around 40 MPa of the bonding strength to the substrate [36]. HCA forms on the dicalcium silicate coatings via silica-rich layer after soaking in SBF within 2 days. The HCA formation in SBF of the plasma-sprayed calcium silicate coatings has been proposed to play an important role in the formation of a hydrated silica layer with functional groups due to ionic exchange between Ca2+ ions in the coatings and proton in SBF.
Only gold members can continue reading. Log In or Register to continue