Mrs. Moore’s daughter calls the clinic. She tells you that her mother has been up at night, wandering the house, listening and speaking to people who are not there. If she tries to stop her, Mrs. Moore gets agitated and has tried to hit the daughter. The daughter tells you that she volunteers at a long-term care facility back where she lives and there are a number of people like her mother taking Seroquel. She asks if she can get this drug for her mother. After reading this chapter, determine if this is an appropriate medication for Mrs. Moore.

Antipsychotic drugs are administered to patients experiencing a psychotic disorder. The term psychosis refers to a spectrum of disorders that affect mood and behavior, with schizophrenia being the most recognized disorder. Schizophrenia is characterized by disordered thinking, perceptual disturbance, behavioral abnormality, affective problems, and impaired socialization. Symptoms of the disease are known as positive or negative symptoms (Display 23.1). Antipsychotic medications are designed to diminish these behaviors so people can function in society.

Antipsychotic drugs act on the dopamine receptors of the brain. Neurobiologic theory suggests that it is higher levels of the neurotransmitter dopamine that cause problems. Positive symptoms result from misfiring at the nerve synapse. Anatomic changes coupled with misfiring cause the negative symptoms. Drugs work by inhibiting or blocking the release of the neurotransmitter dopamine in the brain and possibly regulate the firing of nerve cells in certain areas of the brain. These effects may be responsible for the ability of these drugs to suppress the symptoms of certain psychotic disorders (Fig. 23.1). The conventional or first-generation antipsychotics (FGAs) work to diminish the positive symptoms. But, because these drugs block dopamine transmission, they also produce unpleasant extrapyramidal effects (see Adverse Reactions). Examples of antipsychotic drugs include chlorpromazine, haloperidol (Haldol), and fluphenazine. 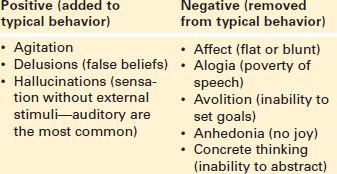 The antipsychotic drugs are used in the treatment of the following:

•  Acute and chronic psychoses, such as schizophrenia 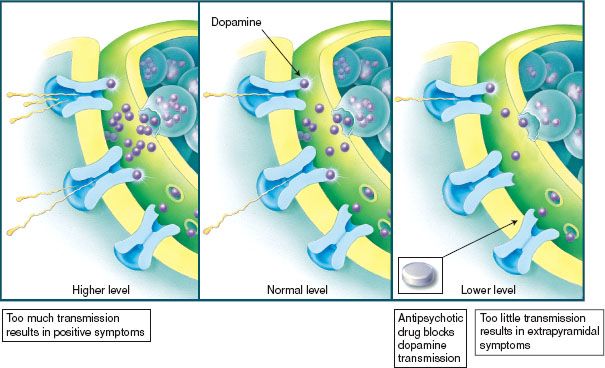 •  Urticaria, photophobia (intolerance to light), photosensitivity (abnormal sensitivity when exposed to light). Photosensitivity can result in severe sunburn when patients taking antipsychotic drugs are exposed to the sun or ultraviolet light, such as that in a tanning bed.

•  Possible increase in the intensity of the psychotic symptoms

Recent studies indicate there is a higher incidence of diabetes in patients with schizophrenia than in the general population (Llorente, 2006). This may be due to adverse reactions of the (SGA) medications or lifestyle behaviors of this patient population.

Neuroleptic malignant syndrome (NMS) is a rare reaction characterized by a combination of extrapyramidal effects, hyperthermia, and autonomic disturbance. It typically occurs within 1 month after the antipsychotic drugs are begun. NMS is potentially fatal and requires intensive symptomatic treatment and immediate discontinuation of the drug causing the syndrome. Once the antipsychotic drug is discontinued, recovery occurs within 7 to 10 days.

A major concern in the treatment of psychosis is adherence to a consistent medication regimen. Behaviors associated with the disease often cause people to be hospitalized. When medications are started the behavioral symptoms (see Display 23.1) diminish, yet in turn, adverse reactions occur. Some of the adverse reactions can be as uncomfortable to the patient as the disease itself. Additionally, these medications take time to produce the optimal affect (sometimes 6 to 10 weeks). Patients may independently stop using the drug because of the unpleasantness of the reactions, thus causing the psychotic symptoms to return. Once psychotic symptoms return the patient typically engages in the behaviors that caused him or her to be hospitalized. This becomes a “revolving door” of hospitalizations and discharges and is known as recidivism. The following sections describe the adverse reactions that are typically unacceptable to patients.

•  Dystonia—facial grimacing and twisting of the neck into unnatural positions

Tardive dyskinesia (TD) is a syndrome consisting of irreversible, involuntary movements. TD is characterized by rhythmic, involuntary movements of the tongue, face, mouth, or jaw and sometimes the extremities. The tongue may protrude, and there may be chewing movements, puckering of the mouth, and facial grimacing. TD is a late-appearing reaction and may be observed in patients receiving an antipsychotic drug or after discontinuation of antipsychotic drug therapy. Because TD is nonreversible, drug therapy must be discontinued when symptoms occur during the course of therapy. Because of the risk of TD, it is best to use the smallest dose and the shortest duration of treatment that produces a satisfactory clinical response. The use of atypical (SGA) antipsychotic drugs has increased because they are less likely to cause TD effects.

Antipsychotics are contraindicated in patients with known hypersensitivity to the drugs, in comatose patients, in those who are severely depressed, and in those who have bone marrow depression, blood dyscrasias, Parkinson’s disease (specifically, haloperidol), liver impairment, coronary artery disease, or severe hypotension or hypertension. Due to a specific enzyme reaction, grapefruit or its juice should not be taken if the patient is on the drug quetiapine.

Patients with dementia may exhibit agitated behaviors resulting in treatment using antipsychotic drugs. There is an association between increased cerebrovascular problems and mortality with the use of antipsychotic medications (especially SGAs) in this population.

The following interactions may occur when an antipsychotic is administered with another agent: 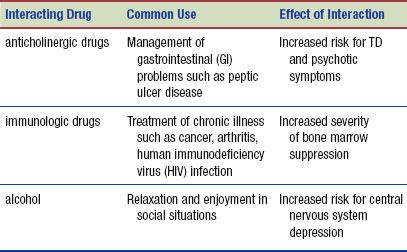 A patient receiving an antipsychotic drug may be treated in the hospital or in an outpatient setting. Assessment of the patient’s mental status before and periodically throughout therapy should happen in any setting. Note the presence of both positive (hallucinations or delusions) and negative symptoms, documenting them accurately in the patient’s record.

Before starting therapy for the hospitalized patient, attempt to obtain a complete mental health, social, and medical history. In the case of psychosis, patients often are unable to give a reliable history of their illness. When available, obtain this information from a family member or friend. As the history is taken, observe the patient for any behavior patterns that appear to be deviations from normal. Examples of deviations include poor eye contact, failure to answer questions completely, inappropriate answers to questions, a monotone speech pattern, and inappropriate laughter, sadness, or crying.

During the initial assessment, you may need to rely more on your own observation of the patient than actual physical assessment. Frequently, patients in a psychotic episode do not perceive reality in the same manner as other patients and touch may be thought of as a violent act against themselves instead of a therapeutic gesture as with other patient populations. The patient may strike out due to fear caused by the psychosis; therefore, touching can be perceived by the patient as a threatening gesture and should be avoided.

Some patients, such as those with controlled schizophrenia, do not require inpatient care. You may see these patients at periodic intervals in the mental health outpatient setting. The initial assessments of the outpatient are basically the same as those for the hospitalized patient. Obtain a medical history and a history of the symptoms of the mental disorder from the patient, a family member, or the patient’s hospital documents.

Many antipsychotic drugs are administered for a long time, which makes the ongoing assessment an important part of determining therapeutic drug effects and monitoring for adverse reactions, particularly EPS (see Display 23.2) and TD. Your role is important in the administration of these drugs in both the inpatient and clinic settings for the following reasons:

The patient’s response to drug therapy on an inpatient basis requires around-the-clock assessments, because frequent dosage adjustments may be necessary during therapy.

Accurate assessments for the appearance of adverse drug effects assume a greater importance when the patient may be unable to verbalize physical changes to the primary health care provider or nursing staff.

Drug-specific nursing diagnoses are the following:

Risk for Injury related to hypotension or sedation

Risk for Infection related to agranulocytosis

Nursing diagnoses related to drug administration are discussed in Chapter 4.

The expected outcomes for the patient depend on the reason for drug administration but may include an optimal response to drug therapy, meeting of patient needs related to management of adverse drug reactions, an absence of injury, and confidence in an understanding of the medication regimen.

Promoting an Optimal Response to Therapy

You should develop a nursing care plan that helps to empower the patient in dealing with the illness as well as meeting the patient’s individual needs.

MANAGING CARE OF THE INPATIENT. Notations of patient behavioral patterns are written at periodic intervals (frequency depends on hospital or unit guidelines). An accurate description of the patient’s behavior aids the primary health care provider in planning therapy and thus becomes an important part of nursing management. Patients with a poor response to drug therapy may require dosage changes, a change to another psychotherapeutic drug, or the addition of other therapies to the treatment regimen. However, it is important to know that full response to antipsychotic drugs takes several weeks.

If the patient’s behavior is violent or aggressive, antipsychotic drugs may have to be given parenterally. You will require assistance in securing the patient and should give the drugs intramuscularly (IM) in a large muscle mass, such as the gluteus muscle. Keep the patient lying down (when possible) for about 30 minutes after administering the drug.

In combative patients or those who have serious manifestations of acute psychosis (e.g., hallucinations or loss of contact with reality), parenteral administration may be repeated every 1 to 4 hours until the desired effects are obtained. Monitor the patient closely for cardiac arrhythmias or rhythm changes, or hypotension.