Antigen–Antibody Reactions in the Laboratory

Antigen–Antibody Reactions in the Laboratory

Reactions of antigens and antibodies are highly specific. An antibody will react only with the antigen that induced it or with a closely related antigen. Because of the great specificity, reactions between antigens and antibodies are suitable for identifying one by using the other. This is the basis of serologic reactions. However, cross-reactions between related antigens can occur, and these can limit the usefulness of the test.

The results of many immunologic tests are expressed as a titer, which is defined as the highest dilution of the specimen (e.g., serum) that gives a positive reaction in the test. Note that a patient’s serum with an antibody titer of, for example, 1/64 contains more antibodies (i.e., is a higher titer) than a serum with a titer of, for example, 1/4.

Many types of diagnostic tests are performed in the immunology laboratory. Most of these tests can be designed to determine the presence of either antigen or antibody. To do this, one of the components, either antigen or antibody, is known and the other is unknown. For example, with a known antigen such as influenza virus, a test can determine whether antibody to the virus is present in the patient’s serum. Alternatively, with a known antibody, such as antibody to herpes simplex virus, a test can determine whether viral antigens are present in cells taken from the patient’s lesions.

In this test, the antigen is particulate (e.g., bacteria and red blood cells)1 or is an inert particle (latex beads) coated with an antigen. Antibody, because it is divalent or multivalent, cross-links the antigenically multivalent particles and forms a latticework, and clumping (agglutination) can be seen. This reaction can be done in a small cup or tube or with a drop on a slide. One very commonly used agglutination test is the test that determines a person’s ABO blood group (Figure 64–1; see the section on blood groups at the end of this chapter). 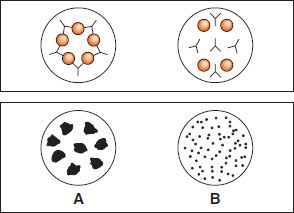 FIGURE 64–1 Agglutination test to determine ABO blood type. On the slide at the bottom of the figure, a drop of the patient’s blood was mixed with antiserum against either type A (left) or type B (right) blood cells. Agglutination (clumping) has occurred in the drop on the left containing the type A antiserum but not in the drop containing the type B antiserum, indicating that the patient is type A (i.e., has A antigen on the red cells). The slide at the top shows that the red cells (circles) are cross-linked by the antibodies (“Y” shapes) in the drop on the left but not in the drop on the right. If agglutination had occurred in the right side as well, it would indicate that the patient was producing B antigen as well as A and was type AB. 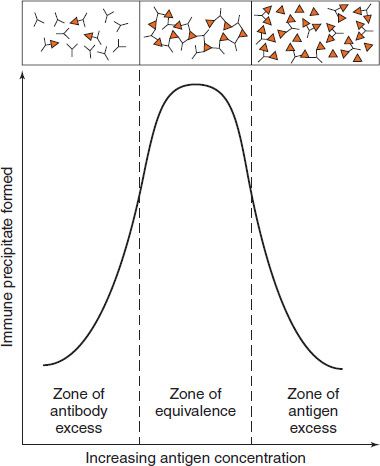 FIGURE 64–2 Precipitin curve. In the presence of a constant amount of antibody, the amount of immune precipitate formed is plotted as a function of increasing amounts of antigen. In the top part of the figure, the binding of antigen (

) and antibody (Y) in the three zones is depicted. In the zones of antibody excess and antigen excess, a lattice is not formed and precipitation does not occur, whereas in the equivalence zone, a lattice forms and precipitation is maximal. (Modified and reproduced with permission from Stites D, Terr A, Parslow T, eds. Basic & Clinical Immunology. 9th ed. Originally published by Appleton & Lange. Copyright 1997 McGraw-Hill.)

Precipitin tests can be done in solution or in semisolid medium (agar).

The concept of precipitation in solution is used clinically to measure the amount of immunoglobulins (IgM, IgG, etc.) in the blood plasma. The lab test used is called nephelometry, in which the amount of precipitate formed is measured by optical density of the precipitate. In the test, antibody specific for IgM, IgG, IgA, or IgE is reacted with the patient’s serum and the optical density measured. This value is then compared with a standard curve, which displays the optical density caused by known amounts of the immunoglobulins.

This is done as either single or double diffusion. It can also be done in the presence of an electric field.

Single Diffusion— In single diffusion, antibody is incorporated into agar and antigen is placed into a well. As the antigen diffuses with time, precipitation rings form depending on the antigen concentration. The greater the amount of antigen in the well, the farther the ring will be from the well. By calibrating the method, such radial immunodiffusion is used to measure IgG, IgM, complement components, and other substances in serum. (IgE cannot be measured because its concentration is too low.)

Double Diffusion—In double diffusion, antigen and antibody are placed in different wells in agar and allowed to diffuse and form concentration gradients. Where optimal proportions (see zone of equivalence, above) occur, lines of precipitate form (Figure 64–3). This method (Ouchterlony) indicates whether antigens are identical, related but not identical, or not related (Figure 64–4).

FIGURE 64–4 Double-diffusion (Ouchterlony) precipitin reactions. In these Ouchterlony reactions, wells are cut into an agar plate and various antigens and antisera are placed in the wells. The antigens and antibodies diffuse toward each other within the agar, and a line of precipitate forms in the zone of equivalence. Close to the antigen-containing well, a zone of antigen excess exists and no precipitate forms; close to the antibody-containing well, a zone of antibody excess exists and no precipitate forms. A and B are unrelated antigens (i.e., they have no epitopes in common). B and C are related antigens (i.e., they have some epitopes in common but some that are different). For example, chicken lysozyme (well B) and duck lysozyme (well C) share some epitopes because they are both lysozymes but have unique epitopes as well because they are from different species. The line of identity between B and C is caused by the reaction of the anti-B antibody with the shared epitopes on antigens B and C. The spur pointing toward well 4 is caused by the reaction of some of the anti-B antibody with the unique epitopes on antigen B in well 3. These lines of partial identity occur because antibody to B (chicken lysozyme) is polyclonal and has some immunoglobulins that react with the epitopes common to chicken and duck lysozyme and other immunoglobulins that react only with the epitopes unique to chicken lysozyme. (Modified and reproduced with permission from Brooks GF et al. Medical Microbiology. 19th ed. Originally published by Appleton & Lange. Copyright 1991 McGraw-Hill.)

Precipitation in Agar with an Electric Field

Immunoelectrophoresis—A serum sample is placed in a well in agar on a glass slide (Figure 64–5). A current is passed through the agar, and the proteins move in the electric field according to their charge and size. Then a trough is cut into the agar and filled with antibody. As the antigen and antibody diffuse toward each other, they form a series of arcs of precipitate. This permits the serum proteins to be characterized in terms of their presence, absence, or unusual pattern (e.g., human myeloma protein). 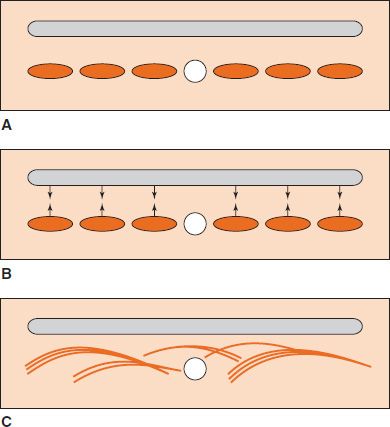 Counter-Immunoelectrophoresis— This method relies on movement of antigen toward the cathode and of antibody toward the anode during the passage of electric current through agar. The meeting of the antigen and antibody is greatly accelerated by this method and is made visible in 30 to 60 minutes. This has been applied to the detection of bacterial and fungal polysaccharide antigens in cerebrospinal fluid.

This method is used for the quantitation of antigens or haptens that can be radioactively labeled. It is based on the competition for specific antibody between the labeled (known) and the unlabeled (unknown) concentration of material. The complexes that form between the antigen and antibody can then be separated and the amount of radioactivity measured. The more unlabeled antigen is present, the less radioactivity there is in the complex. The concentration of the unknown (unlabeled) antigen or hapten is determined by comparison with the effect of standards. RIA is a highly sensitive method and is commonly used to assay hormones or drugs in serum. The radioallergosorbent test (RAST) is a specialized RIA that is used to measure the amount of serum IgE antibody that reacts with a known allergen (antigen).

This method can be used for the quantitation of either antigens or antibodies in patient specimens. It is based on covalently linking an enzyme to a known antigen or antibody, reacting the enzyme-linked material with the patient’s specimen, and then assaying for enzyme activity by adding the substrate of the enzyme. The method is nearly as sensitive as RIA yet requires no special equipment or radioactive labels (Figure 64–6).

FIGURE 64–6 Enzyme-linked immunosorbent assay (ELISA). The term enzyme-linked refers to the covalent binding (linking) of an enzyme to antibody to human IgG. If the patient has antibodies to the microbial or viral antigen, those antibodies will bind to the microbial or viral antigens. The antibody to human IgG linked to the enzyme will then bind to the patient’s antibodies. Then when the substrate of the enzyme is added, the substrate changes color, indicating that the patient’s serum contained antibodies.

Tags: Review of Medical Microbiology and Immunology 13e
Jan 26, 2017 | Posted by admin in MICROBIOLOGY | Comments Off on Antigen–Antibody Reactions in the Laboratory
Premium Wordpress Themes by UFO Themes
WordPress theme by UFO themes
%d bloggers like this: