Mr. Phillip has been severely depressed for about 2 months, following the death of his wife in a car accident. One week ago, the primary care provider prescribed Zoloft 100 mg orally daily. His family is concerned because he is still depressed. Mr. Phillip’s daughter is concerned because he feels drowsy and can’t seem to get up until 11 a.m. or noon on most days. They are requesting that the dosage be increased. Read about the antidepressants and determine what should happen next.

Depression may be described as feeling sad, unhappy, or “down in the dumps.” Most of us feel this way at one time or another for short periods. Major depressive disorder is the medical diagnosis for one of the mood disorders (a spectrum of conditions that range from severe debilitation to an exhaustive elation). Also called clinical depression by many people, symptoms are not the result of normal bereavement, such as the loss of a loved one, or another disease, such as hypothyroidism. When the major depressive episode is a depressed or dysphoric (extreme or exaggerated sadness, anxiety, or unhappiness) mood that interferes with daily functioning, it is termed unipolar depression. For a diagnosis of major depressive disorder, five or more of the symptoms listed in Display 22.1 need to occur daily or nearly every day for a period of 2 weeks or more.

The depressive symptoms of mood disorders are treated with antidepressant drugs and psychotherapy. The four classes of antidepressants are:

For several years it was thought that antidepressants blocked the reuptake of the endogenous (produced by the body) neurotransmitters norepinephrine and serotonin. This action resulted in stimulation of the central nervous system (CNS) and alleviation of the depressed mood. This theory is now being questioned. Research indicates that the effects of antidepressants are related to slow adaptive changes in norepinephrine and serotonin receptor systems (Fuller, 1985). Treatment with antidepressants is thought to produce complex changes in the sensitivities of both presynaptic and postsynaptic receptor sites. Antidepressants increase the sensitivity of postsynaptic alpha (α)-adrenergic and serotonin receptors and decrease the sensitivity of the presynaptic receptor sites. This enhances recovery from the depressive episode by making neurotransmission activity more effective, as visualized in Figure 22.1.

•  Feelings of hopelessness or helplessness

•  Diminished interest in activities of life

•  Fatigue or loss of energy

•  Diminished ability to think or concentrate, or indecisiveness

•  Recurrent thoughts of death or suicide (or suicide attempt) 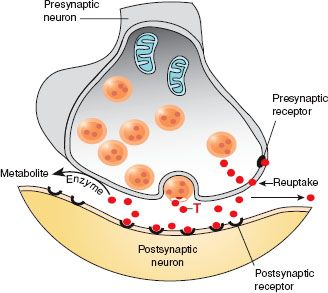 Figure 22.1 Antidepressant drugs inhibit the reuptake of the neurotransmitter (T), thus making it available to the postsynaptic neuron.

The SSRIs inhibit CNS uptake of serotonin (a CNS neurotransmitter). The increase in serotonin levels is thought to act as a stimulant to reverse depression.

The SSRIs are used in the treatment of the following:

The SSRIs are contraindicated in patients with a hypersensitivity to the drugs and during pregnancy (pregnancy category C). Patients taking cisapride (Propulsid), pimozide (Orap), or carbamazepine (Tegretol) should not take fluoxetine (Prozac). Due to a specific enzyme reaction, grapefruit or its juice should not be consumed if the patient is on sertraline (Zoloft).

The following interactions may occur when an SSRI is administered with another agent: 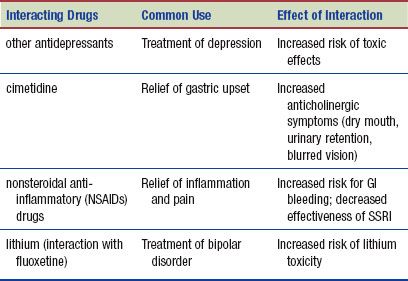 Note that the effectiveness of fluoxetine is decreased in patients who smoke cigarettes during administration of the drug.

It is thought that the mechanism of action of most of the SNRIs/DNRIs is to affect neurotransmission of serotonin, norepinephrine, and dopamine. Examples in this group of drugs include venlafaxine (Effexor XR) and bupropion (Wellbutrin).

SNRIs/DNRIs may be used in conjunction with psychotherapy in severe cases or alone in the treatment of the following:

SNRIs/DNRIs are contraindicated in patients with known hypersensitivity to the drugs. Among the SNRIs/DNRIs antidepressants, bupropion and maprotiline are pregnancy category B drugs. Other antidepressants discussed in this section are in pregnancy category C. Safe use of the antidepressants during pregnancy has not been established. They should be used during pregnancy only when the potential benefits outweigh the potential hazards to the developing fetus. Maprotiline should not be used with patients who have a seizure disorder or during the acute phase of a myocardial infarction. Patients taking cisapride, pimozide, or carbamazepine should not take nefazodone because of risk for hepatic failure. Due to a specific enzyme reaction, grapefruit or its juice should not be taken if the patient is on vilazodone or trazodone.

The smoking cessation product Zyban is a form of the antidepressant drug bupropion. Smokers should not use Zyban if they are currently taking bupropion for management of depression because of the possibility of bupropion overdose.

SNRIs/DNRIs should be used cautiously in patients with cardiac disease, renal or hepatic impairment, or hyperthyroid disease or those who are at risk of suicidal ideation or behavior.

The following interactions may occur when an SNRI/DNRI is administered with another agent: 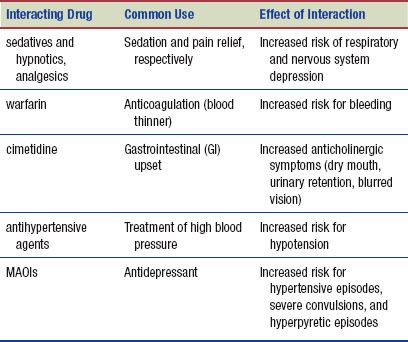 Discovery of the role of dopamine in depression and the ability to be more selective in reuptake make the following classes of drugs less frequently prescribed than those already discussed.

The TCAs, such as amitriptyline and doxepin, inhibit reuptake of norepinephrine or serotonin in the brain.

Tricyclic antidepressant drugs are used in the treatment of the following:

Although the TCAs are not considered antipsychotic agents, the drug amoxapine has been associated with tardive dyskinesia and neuroleptic malignant syndrome (NMS). Tardive dyskinesia is a syndrome of involuntary movement that may be irreversible. Symptoms of NMS are similar and include muscle rigidity, altered mental status, and autonomic system problems, such as tachycardia or sweating. These syndromes tend to occur more readily in elderly women; the drug should be discontinued, the primary health care provider notified immediately, and treatment of adverse effects begun quickly.

The TCAs should be used cautiously in patients with cardiac disease, hepatic or renal impairment, hyperthyroid disease, history of seizure activity, narrow-angle glaucoma or increased intraocular pressure, or urinary retention and in those at risk of suicidal ideation or behavior.

The TCAs can cause cardiac-related adverse reactions, such as tachycardia and heart block. Give these drugs with caution to older adults or the person with pre-existing cardiac disease.

The following interactions may occur when a TCA is administered with another agent: 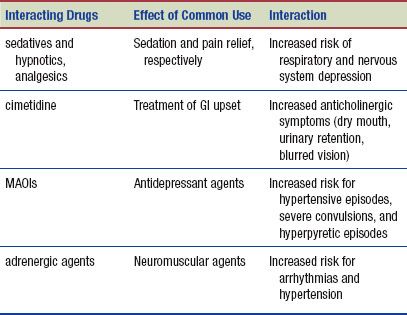 Drugs classified as MAOIs inhibit the activity of monoamine oxidase, a complex enzyme system responsible for inactivating certain neurotransmitters. Blocking monoamine oxidase results in an increase in endogenous epinephrine, norepinephrine, dopamine, and serotonin in the nervous system. An increase in these neurohormones (secreted rather than transmitted neurosubstances) stimulates the CNS.

The MAOI antidepressants are used in the treatment of depressive episodes and may be used in conjunction with psychotherapy in severe cases. Unlabeled uses include bulimia, night terrors, migraine headaches, seasonal affective disorder, and multiple sclerosis.

One of the earliest symptoms of hypertensive crisis is headache (usually occipital), followed by a stiff or sore neck, nausea, vomiting, sweating, fever, chest pain, dilated pupils, and bradycardia or tachycardia. If a hypertensive crisis occurs, immediate medical intervention is necessary to reduce the blood pressure. Strokes (cerebrovascular accidents) and death have been reported.