Lillian Chase was in a car accident last year and had a seizure on the way to the hospital. As you review her medication list and ask about her drugs, she tells you that since she has been taking phenytoin she has had no seizures.

The term convulsion refers to a sudden, involuntary contraction of the muscles of the body, often accompanied by loss of consciousness. A seizure may be defined as periodic disturbances of the brain’s electrical activity. The terms convulsion and seizure are often used interchangeably, having basically the same meaning. Seizure disorders are generally categorized as idiopathic, hereditary, or acquired. Idiopathic seizures have no known cause; hereditary seizure disorders are passed from parent to child in their genetic makeup; and acquired seizure disorders have a known cause—causes include high fever, electrolyte imbalances, uremia, hypoglycemia, hypoxia, brain tumors, and some drug withdrawal reactions. The primary goal is to treat the underlying pathologic process to stop the seizures. Sometimes the cause is not clear, and the seizures cannot be stopped; rather, the activity needs to be controlled.

Seizures caused by disease, such as in epilepsy, may not be easy to eliminate. Epilepsy is defined as a permanent, recurrent seizure disorder. Examples of the known causes of epilepsy include brain injury at birth, head injuries, and inborn errors of metabolism. In some patients, the cause of epilepsy is never determined. Epileptic seizures are classified according to an international system (Fig. 29.1). Each different type of seizure disorder is characterized by a specific pattern of events, as well as a different pattern of motor or sensory manifestation. 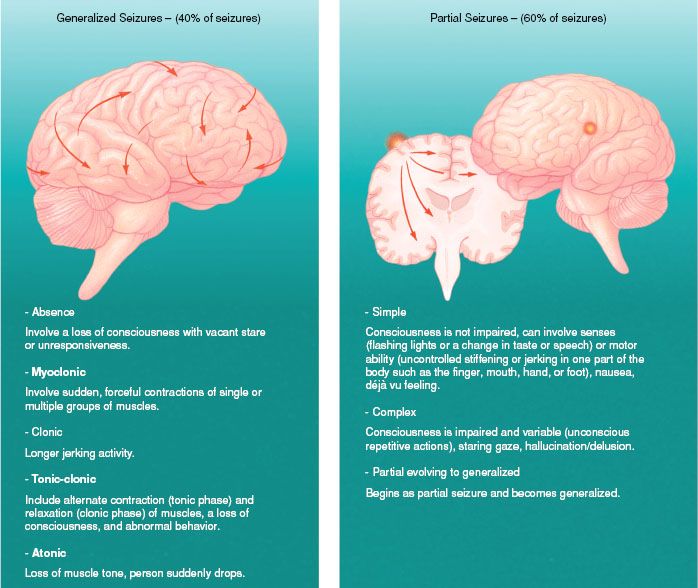 Anticonvulsants depress abnormal nerve impulse discharges in the CNS. The six categories of anticonvulsants achieve this effect through different modes of action:

1.  Hydantoins stabilize the hyperexcitability postsynaptically in the motor cortex of the brain.

3.  Succinimides depress the motor cortex, creating a higher threshold before nerves react to the convulsive stimuli.

6.  Miscellaneous drugs have differing properties; for example, gabapentin is a GABA agonist, and topiramate blocks the seizure activity rather than raising the threshold.

Seizures are theoretically reduced in intensity and frequency of occurrence or, in some instances, are virtually eliminated. For some patients, only partial control of the seizure disorder may be obtained with anticonvulsant drug therapy.

Anticonvulsants are used prophylactically to prevent seizures after trauma or neurosurgery or in patients with a tumor and in the treatment of the following:

•  Seizures of all types

Occasionally, status epilepticus (an emergency characterized by continual seizure activity with no interruptions) can occur. Lorazepam (Ativan) is the drug of choice for this condition. However, because the effects of lorazepam last less than 1 hour, longer-lasting anticonvulsants such as phenytoin (Dilantin) are given to continue to control the seizure activity.

Adverse reactions that may occur with the administration of an anticonvulsant drug include the following:

•  Urinary frequency; ezogabine (Potiga) has been associated with urinary retention and pain.

•  Serious skin reactions, such as Stevens-Johnson syndrome, have been associated with the use of lamotrigine (Lamictal).

•  Hematologic changes, such as pancytopenia (decrease in all the cellular components of the blood), leukopenia, aplastic anemia, and thrombocytopenia, have occurred with administration of selected drugs, including carbamazepine (Tegretol), felbamate (Felbatol), and trimethadione (Tridione). See the Summary Drug Table: Anticonvulsants for more information.

Research suggests an association between the use of anticonvulsants by pregnant women with epilepsy and an increased incidence of birth defects. The use of anticonvulsants is not discontinued in pregnant women with a history of major seizures because of the danger of precipitating status epilepticus. However, when seizure activity poses no serious threat to the pregnant woman, the primary health care provider may consider discontinuing use of the drug during pregnancy.

Carbamazepine should not be given within 14 days of monoamine oxidase inhibitor (MAOI) antidepressants. Carbamazepine is contraindicated in patients with bone marrow depression or hepatic or renal impairment and during pregnancy (pregnancy category D). Valproic acid (Depakote) is not administered to patients with renal impairment or during pregnancy (pregnancy category D). Oxcarbazepine (Trileptal), a miscellaneous anticonvulsant, may exacerbate dementia.

Miscellaneous anticonvulsants are used cautiously in patients with glaucoma or increased intraocular pressure; a history of cardiac, renal, or liver dysfunction; and psychiatric disorders. In addition to hepatic failure and birth defects, valproic acid is associated with an increased risk for pancreatitis.

The following interactions may occur when an anticonvulsant is administered with another agent: 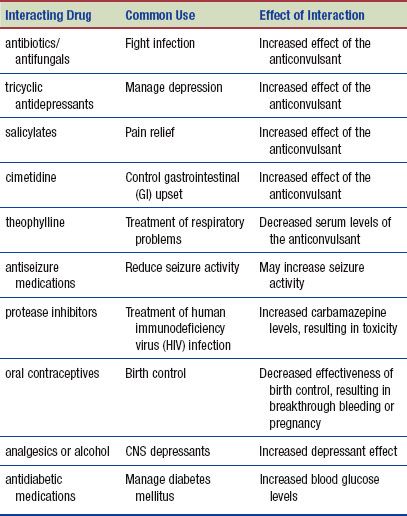 Seizures that occur in the outpatient setting are almost always seen first by family members or friends, rather than by a member of the health care profession. The occurrence of abnormal behavior patterns or convulsive movements usually prompts the patient to visit the primary health care provider’s office or a neurologic clinic. A thorough patient history is necessary to identify the type of seizure disorder. In addition to the patient’s report of seizure activity, the type of information that should be obtained from those who have observed the seizure is listed in Display 29.1.

Patient information should include a family history of seizures (if any) and recent drug therapy (all drugs currently being used). Depending on the type of seizure disorder, other information may be needed, such as a history of a head or other injury or a thorough medical history.

Take and document the vital signs at the time of the initial assessment to provide baseline data. The primary health care provider may order laboratory and diagnostic tests, such as an electroencephalogram (EEG), computed axial tomography (CAT) scan, and magnetic resonance imaging (MRI) scan. A complete blood count, lumbar puncture (LP), and hepatic and renal function tests are drawn to confirm the diagnosis and identify a possible cause of the seizure disorder as well as to provide a baseline during therapy with anticonvulsants.

•  Frequency of the seizures (approximate number per day)

•  Average length of a seizure

•  Description of the aura (a subjective sensation preceding a seizure), if any has occurred

•  Description of the degree of impairment of consciousness

•  Description of what, if anything, appears to bring on the seizure