Mr. Phillip was recently diagnosed with atrial fibrillation and prescribed both propranolol and Coumadin to take at home. When he comes in for weekly lab work, the phlebotomist tells you that Mr. Phillip is very dizzy and she is concerned about his safety. Read about the antiarrhythmic drugs and determine what should happen next.

A number of the drugs in this section are used to treat chronic heart conditions and have been discussed in previous chapters. In this chapter familiar drug names and classes, along with some new ones, will be studied as the category of antiarrhythmic drugs used to treat cardiac arrhythmias. A cardiac arrhythmia (also referred to as a dysrhythmia or irregular heart beat) is an electrical disturbance or irregularity in the rate or rhythm of the heart. This electrical disturbance makes the blood pumping action inefficient because the heart beats too fast (tachycardia) or too slow (bradycardia). Table 39.1 describes some examples of conduction problems known as arrhythmias.

Problems occur as a result of heart disease or from a disorder that affects cardiovascular function. Conditions such as emotional stress, hypoxia, and electrolyte imbalance also may trigger an arrhythmia. The goal of antiarrhythmic drug therapy is to restore normal cardiac function and prevent life-threatening conduction problems.

The cardiac muscle (myocardium) has both nerve and muscle tissues and therefore has the properties of both. Figure 39.1 illustrates how the electrical impulse is generated throughout the heart. Typically, the electrical impulse signals the heart muscle to contract (the heartbeat) in a regular, steady pattern. Some cardiac arrhythmias are caused by the generation of an abnormal number of electrical impulses (stimuli). These abnormal impulses may come from the sinoatrial (SA) node or may be generated in other areas of the myocardium. The antiarrhythmic drugs are classified according to their effects on what is termed the action potential (see Display 39.1 for a description). The pathophysiology of the cardiac condition guides the use of drugs to treat these conduction problems. The drugs used include four basic classes and several subclasses. Drugs in each group, or class, have certain similarities, yet each drug has subtle differences that make it unique. 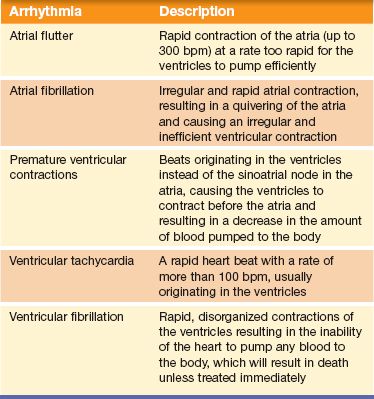 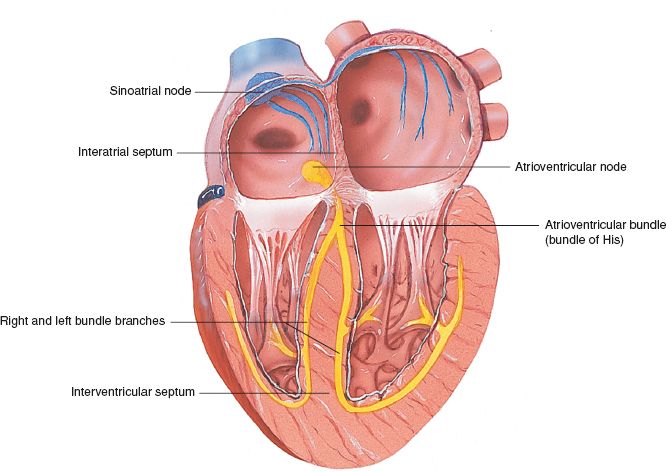 Figure 39.1 Conduction of the heart. SA node is the blue pathway; AV node is the yellow pathway. (Courtesy of Anatomical Chart Co.)

Class I antiarrhythmic drugs have a membrane-stabilizing or anesthetic effect on the cells of the myocardium. Class I contains the largest number of drugs of the four antiarrhythmic drug classifications. Because their actions differ slightly, the drugs are subdivided into classes IA, IB, and IC.

Lidocaine (Xylocaine) decreases diastolic depolarization, decreases automaticity of ventricular cells, and raises the threshold of the ventricular myocardium. Threshold is a term applied to any stimulus of the lowest intensity that will give rise to a response in a nerve fiber. A stimulus must be of a specific intensity (strength, amplitude) to pass along a given nerve fiber.

Some cardiac arrhythmias result from many stimuli present in the myocardium. Some of these are weak or of low intensity but are still able to excite myocardial tissue. Lidocaine raises the threshold of myocardial fibers, which in turn reduces the number of stimuli that will pass along these fibers and therefore decreases the pulse rate and corrects the arrhythmia.

Specifically, flecainide (Tambocor) depresses fast sodium channels, decreases the height and rate of rise of action potentials, and slows conduction of all areas of the heart. Propafenone (Rythmol), which has a direct membrane-stabilizing effect on the myocardial membrane, prolongs the refractory period.

The general action of drugs in class II is to indirectly block calcium channels and block catecholamine-caused arrhythmias. Acebutolol (Sectral) and propranolol (Inderal) act by blocking beta (β)-adrenergic receptors of the heart and kidney, reducing the influence of the sympathetic nervous system on these areas, decreasing the excitability of the heart and the release of renin (lowering heart rate and blood pressure). These drugs have membrane-stabilizing effects that contribute to their antiarrhythmic activity.

All cells are electrically polarized, with the inside of the cell more negatively charged than the outside. The difference in the electrical charge is called the resting membrane potential. Nerve and muscle cells are excitable and can change the resting membrane potential in response to electrochemical stimuli. The action potential is an electrical impulse that passes from cell to cell in the myocardium, stimulating the fibers to shorten, and causing muscular contraction (systole). An action potential generated in one part of the myocardium passes almost simultaneously through all of the myocardial fibers, causing rapid contraction.

The general action of class III antiarrhythmic drugs is prolongation of repolarization. Amiodarone (Cordarone) appears to act directly on the cardiac cell membrane, prolonging the refractory period and repolarization and increasing the ventricular fibrillation threshold. Ibutilide acts by prolonging the action potential, producing a mild slowing of the sinus rate and atrioventricular (AV) conduction.

In general, the class IV antiarrhythmic drugs act by:

•  Lengthening phase 1 and 2 of repolarization

Verapamil (Calan) is a calcium channel blocker. These drugs inhibit the movement of calcium through channels across the myocardial cell membranes and vascular smooth muscle. Cardiac and vascular smooth muscle depends on the movement of calcium ions into the muscle cells through specific ion channels. When this movement is inhibited, the coronary and peripheral arteries dilate, thereby decreasing the force of cardiac contraction. This drug also reduces heart rate by slowing conduction through the SA and AV nodes. Additional information about the calcium channel blockers can be found in the chapter about antihypertensives (Chapter 35).

In general, the antiarrhythmic drugs are used to treat:

•  Other atrial arrhythmias, such as atrial fibrillation or flutter

Antiarrhythmic drugs are used cautiously in patients with hepatic disease, electrolyte disturbances, HF (quinidine, flecainide, and disopyramide), and renal impairment. Most antiarrhythmics are pregnancy category B or C drugs, indicating that safe use of these drugs during pregnancy or lactation, or in children, has not been established. Disopyramide is used cautiously in patients with myasthenia gravis, urinary retention, or glaucoma, and in men with prostate enlargement.

Because of a specific enzyme reaction, grapefruit or its juice should not be taken if on the following drugs: amiodarone or the calcium channel blockers. When antiarrhythmics are used with other medications, various interactions may occur. See Table 39.2 for more interactions.

Table 39.2 Interactions of Antiarrhythmics With Other Agents 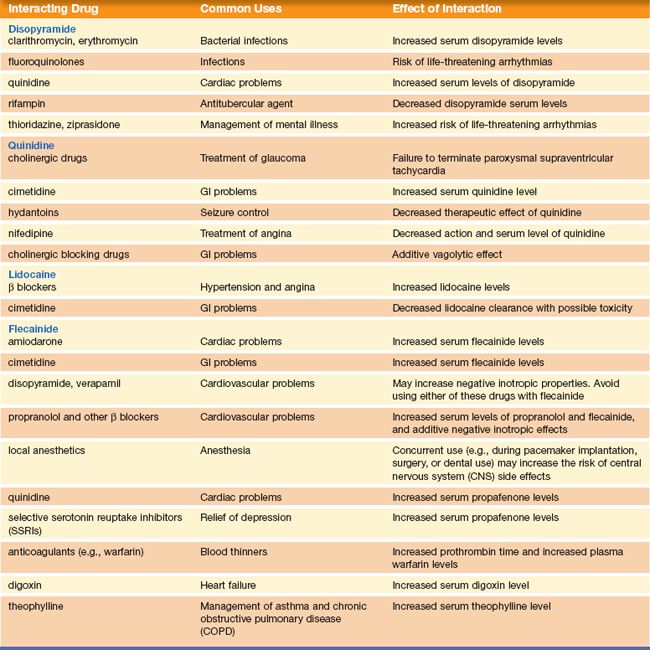