A 26-year-old man was given trimethoprim-sulfamethoxazole for sinusitis and broke out in hives 1 week later. The hives were all over his trunk and arms (Figures 150-1 and 150-2). He had no airway compromise and had only urticaria without angioedema. His sinus symptoms were mostly resolved, so he was told to stop the antibiotic and take an oral antihistamine. The H1-blocker gave him relief of symptoms and the wheals disappeared over the next 2 days. 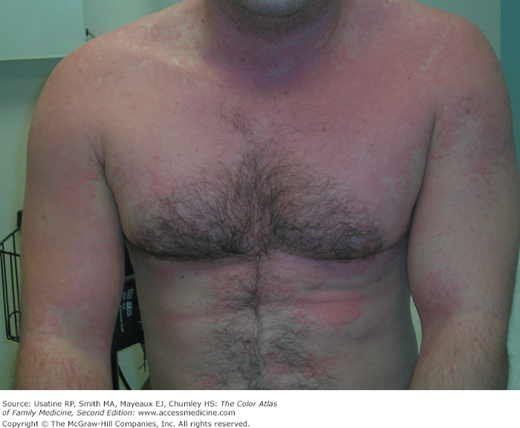 A 26-year-old man with acute urticaria due to trimethoprim-sulfamethoxazole. (Courtesy of Richard P. Usatine, MD.) 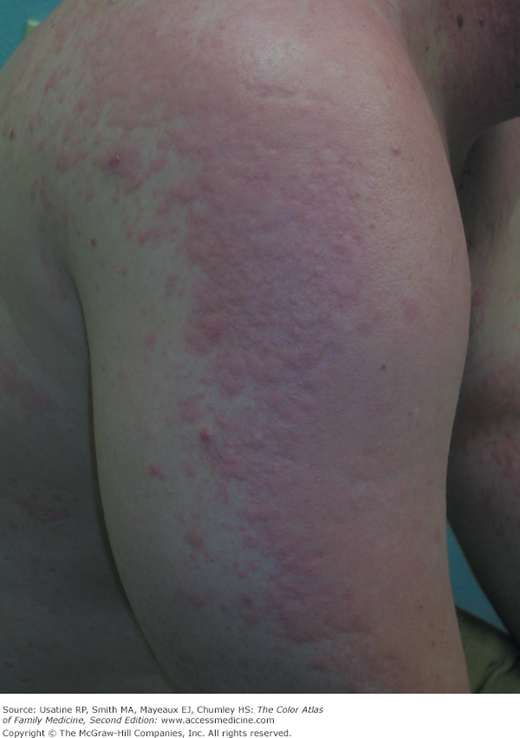 Note the confluence of wheals with a well-demarcated border on the arm of the man with acute urticaria due to trimethoprim-sulfamethoxazole. (Courtesy of Richard P. Usatine, MD.)

Urticaria and angioedema are a heterogeneous group of diseases that cause swelling of the skin and other soft tissues. They both result from a large variety of underlying causes, are elicited by a great diversity of factors, and present clinically in a highly variable way.1 Standard hives with transient wheals is the most common manifestation of urticaria. 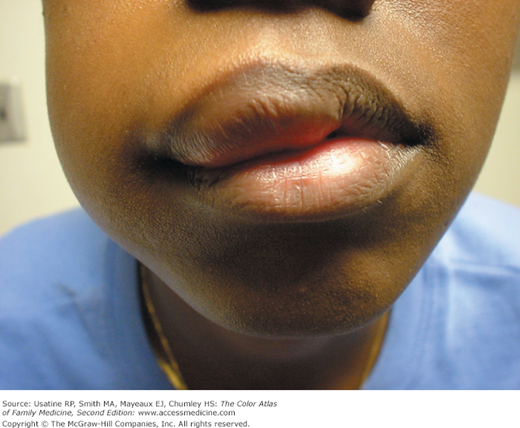 Young black woman with angioedema after being started on an angiotensin-converting enzyme (ACE) inhibitor for essential hypertension. (Courtesy of Adrian Casillas, MD.) 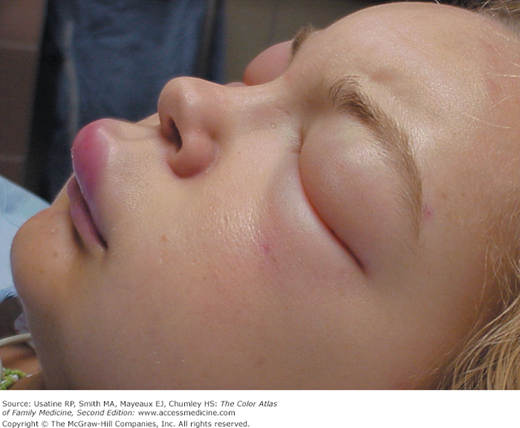 Severe angioedema around the eyes and mouth in a high school girl. (Courtesy of Daniel Stulberg, MD.) 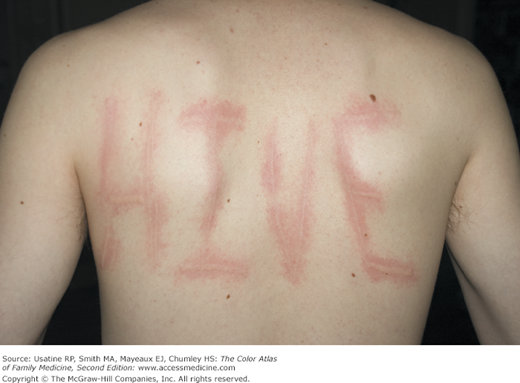 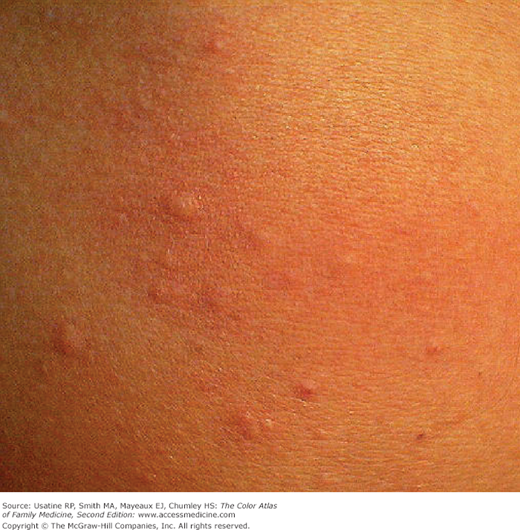 Cholinergic urticaria showing small wheals. The patient would get this urticaria after exercising. (Courtesy of Philip C. Anderson, MD.) 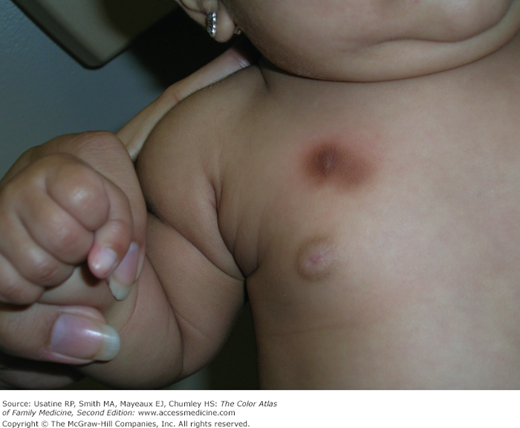 Urticaria pigmentosa on the chest of this 9-month-old girl. She has a positive Darier sign in which stroking the lesion results in edema. (Courtesy of Richard P. Usatine, MD.) 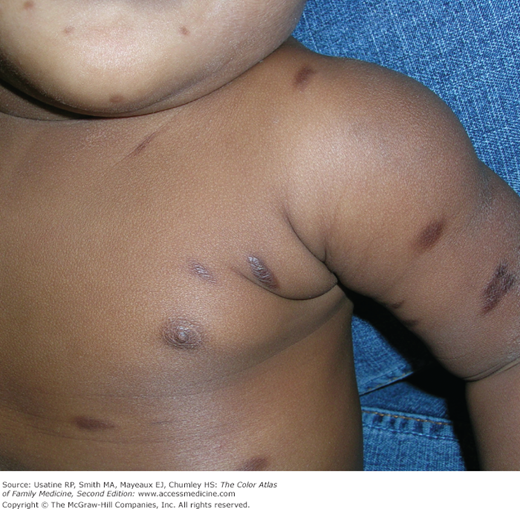 Urticaria pigmentosa in a 4-month-old black boy. His lesions started on day 2 of life and have proliferated. (Courtesy of Richard P. Usatine, MD.) 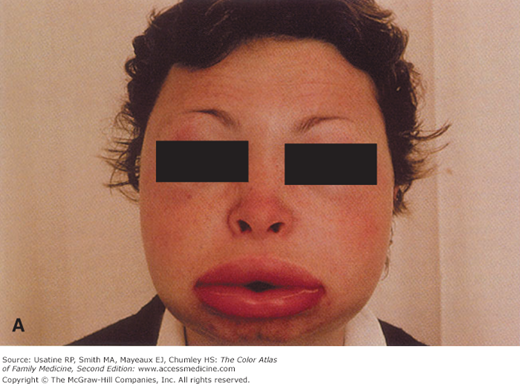 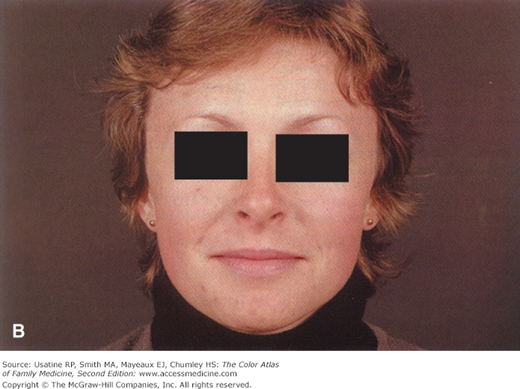 Hereditary angioedema. A. Severe edema of the face during an episode, leading to grotesque disfigurement. B. Angioedema will subside within hours. The patient had a positive family history and had multiple similar episodes including colicky abdominal pain. (With permission from Fitzpatrick’s Color Atlas and Synopsis of Clinical Dermatology, 5th ed. New York, NY: McGraw-Hill; 2005.)