Importance of the Pediatric Spine

Summary of Clinically Relevant Changes of the Zygapophysial Joints

Summary of Clinically Relevant Changes of the Intervertebral Foramina

Developmental Anomalies of the Spine

Unique Development of the Atypical Vertebrae

Key Feature in the Development of Typical Vertebrae

Common Pediatric Disorders Related to the Anatomy of the Spine

The Normal Development of the Thoracic and Lumbar Curves and Scoliosis

Importance of the Pediatric Spine

Understanding the spines of children is important for a number of reasons. Contrary to common belief, a fairly high number of children, particularly adolescents, suffer from back pain, and the pain is recurrent in many (Burton et al., 1996). A study of children in Finland, conducted by Taimela and colleagues (1997), showed the following prevalence of back pain among children:

Salminen and colleagues (1995) showed that recurrent or continuous low back pain was present in 8% to 18% of 14- to 16-year-old children. Other studies have reported the incidence of low back pain in children in Europe and North America to range from 20% to 51% (Faingold et al., 2004).

Perhaps surprisingly, intervertebral disc (IVD) degeneration has been identified with magnetic resonance imaging (MRI) in 15-year-old children, and an unexpectedly high number of young people in their twenties have bulging IVDs that are thought to be the cause of their back pain (Kraemer, 1995; Salminen et al., 1995; Faingold et al., 2004). IVD protrusion is more prevalent in taller adolescents who have less ability to forward flex than in those of average height with better mobility in forward flexion (Salminen, Erkintalo-Tertti, & Paajanen, 1993). Discitis, attributable to inflammation and/or infection of the IVD, is most common in children 10 years of age or younger, probably because of the increased vascular supply to the IVD in young children (Faingold et al., 2004).

The purpose of this chapter is to identify unique anatomic features related to the pediatric spine. A separate chapter on this topic is important because the spines of children are not just miniature versions of the spines of adults. For example, many of the differences related to the pediatric spine can be mistaken for fractures on the x-rays of children (Fesmire & Luten, 1989). Because normally children are not x-rayed unless the chief complaint is related to trauma, or suspected trauma or other serious pathology, the identification of fractures is a primary focus when viewing these x-ray films. Knowing the precise locations of the ossification centers and the locations of closure, or final union, of the primary and secondary centers of ossification is important because these sites are the regions that can be mistaken for fractures most easily.

Understanding pediatric spinal anatomy also is important for the proper planning of certain treatment procedures, such as spinal manipulation. For example, the zygapophysial (Z) joints are underdeveloped until approximately 10 years of age. Knowing the rate and stage of development of these structures allows a clinician to tailor the manipulation by significantly reducing the force in those individuals, and those age groups, when the joints of the spine are not yet fully developed.

This chapter begins with a discussion of the changes that occur with age in key anatomic structures of the spine. Next, clinically relevant developmental changes of the spine that are important to various diagnostic and treatment procedures are covered. The chapter ends with a brief discussion of common pediatric disorders related to the anatomy of the spine.

Changes during Infancy and Childhood of Important Anatomic Structures 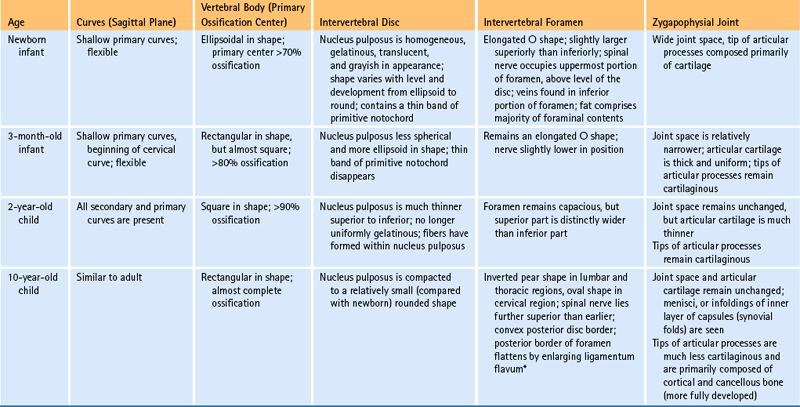 ∗The ligamenta flava begin as thin structures that are convex anteriorly. They thicken dramatically with age and are relatively thick by age 2. They continue to thicken until the age of 10, at which time their anterior border has flattened into the adult appearance. 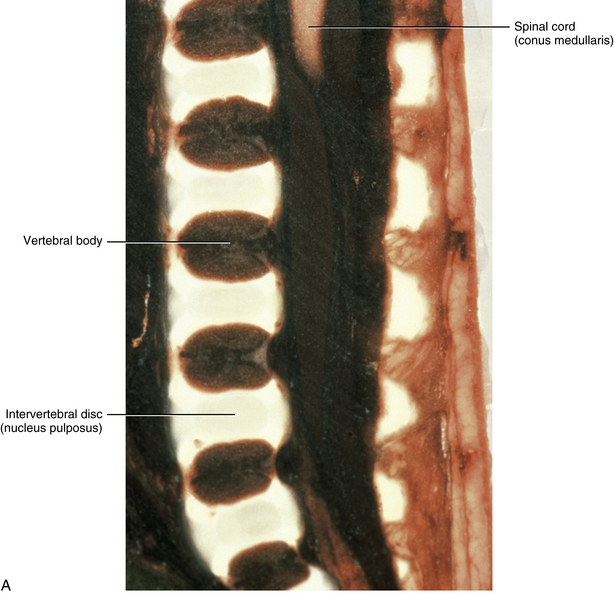 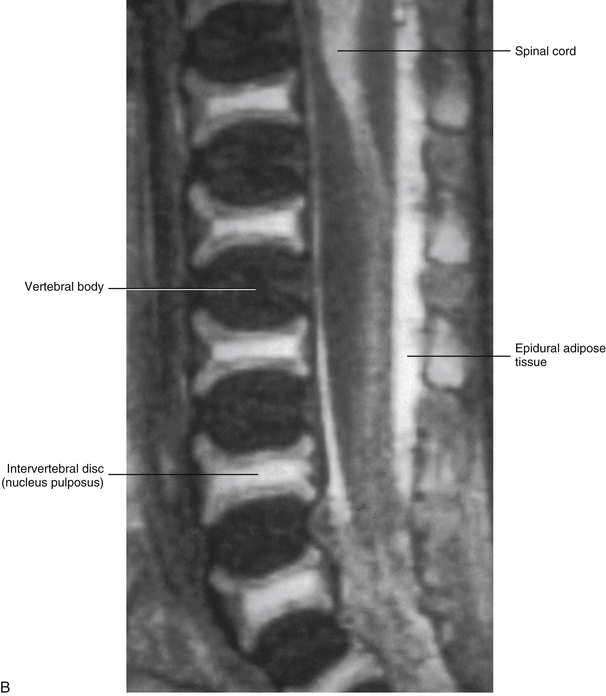 Newborn IVFs are relatively huge (Fig. 13-2). The term capacious is used sometimes to describe the size of the IVFs with respect to the relatively small foraminal contents of young children. Occasionally authors incorrectly apply the term capacious to the IVFs of adults (Crelin, 1973), whereas others have shown that this clearly is not the case (Hewitt, 1970; Giles, 1994). The main reason for the relatively large size of the IVFs in newborns is that the Z joints, which form the posterior border of the IVFs, are underdeveloped in young children (see Fig. 13-2). Both the superior and inferior articular processes are extremely small and the distal ends of both are primarily cartilaginous. The spines of newborns should be handled with extreme care for this reason. 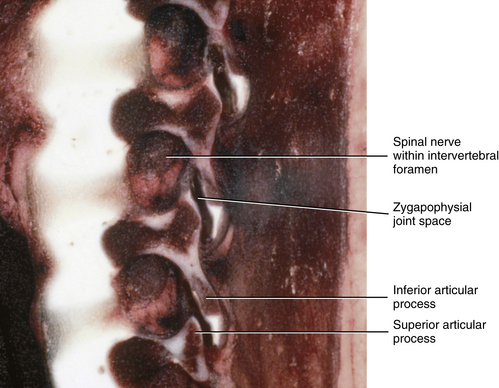 The plane of articulation of the newborn cervical Z joints is more horizontal in orientation than in the adult. This plane gradually becomes more vertically oriented until the age of 10 years, when the adult angle of approximately 45 degrees to the vertical plane is achieved (Kasai et al., 1996).

The curves of the vertebral column at 3 months of age are already changing from those of the newborn. In addition to the primary curves of the thoracic and sacral regions (which have been present since birth), the cervical lordosis (which is a secondary curve) begins to develop at approximately 3 months of age. The formation of the cervical lordosis begins because the 3-month-old infant is beginning to lift up his or her head and look around.

The vertebral bodies are continuing to ossify at 3 months of age; they are now approximately 80% ossified, compared with the 70% ossification found in the newborn. The vertebral bodies also are becoming more rectangular in shape, rather than the ellipsoidal shape seen in newborns. The IVDs are narrowing from superior to inferior and the nucleus pulposus is assuming a more ellipsoidal shape, rather than the rounded shape of newborns (Fig. 13-3). 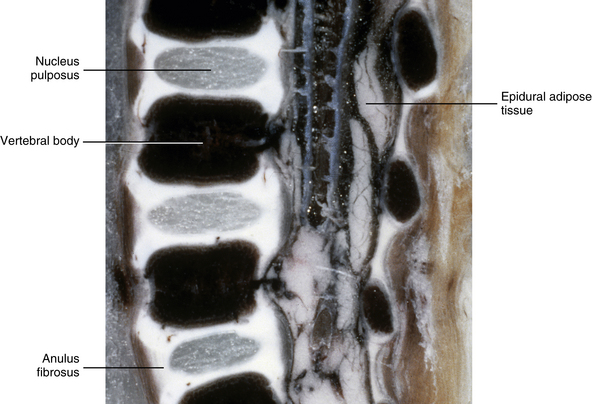 FIG. 13-3 Near midsagittal section (≈3 mm lateral to the midline; note medial aspects of laminae rather than spinous processes in section) of the lumbar region of a 3-month-old infant. The vertebral bodies are now more rectangular in shape than in the newborn, and the intervertebral discs have narrowed from superior to inferior. 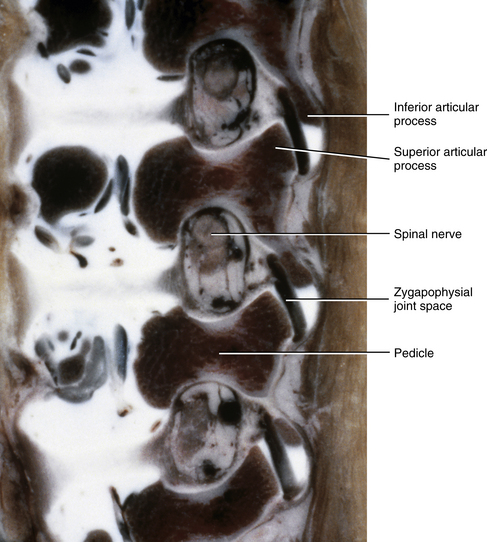 FIG. 13-4 Parasagittal section of the lumbar region of a 3-month-old spine. The intervertebral foramina remain large and the articular processes remain underdeveloped. Notice the great amount of cartilage on the tips of the inferior articular processes. (From Yu S, Haughton VM, & Rosenbaum AE. [1991]. Magnetic resonance imaging and anatomy of the spine. Radiol Clin North Am, 29[4], 691-710.)

The vertebral bodies of the 2-year-old child are almost 90% ossified, and are almost fully developed. They are more rectangular in shape than at 3 months, and the superior and inferior bony rims of the vertebral bodies are more “squared off” at this stage, rather than rounded, as in the 3-month-old infant. At 2 years the IVDs are narrowing from top to bottom, taking on more of an adult type of appearance, although significant further development remains to be completed (Fig. 13-5). 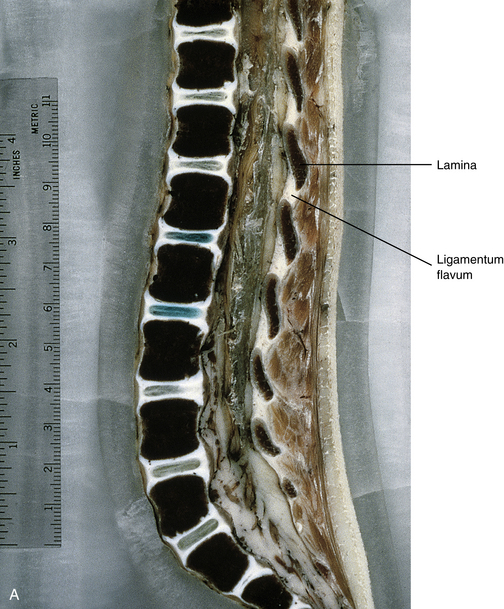 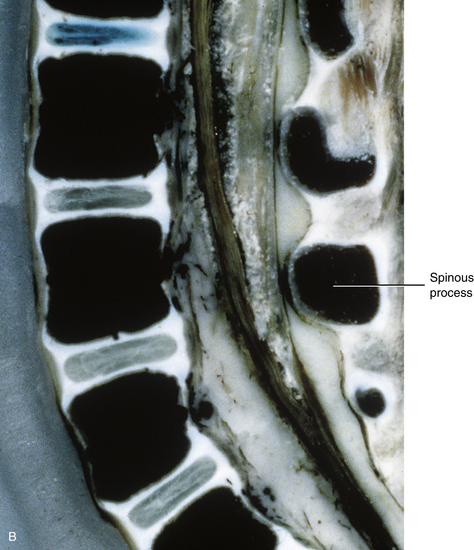 The IVFs of the 2-year-old spine remain capacious; however, they begin to slightly narrow at their inferior aspect, particularly in the lumbar region (Fig. 13-6). The superior and inferior articular processes, which form the Z joints, begin to grow into the posterior and inferior aspect of the IVFs and then become more fully ossified during this stage of development. Even with this added growth and ossification, the Z joints are still relatively underdeveloped, leaving the IVFs comparatively large (see Fig. 13-6). 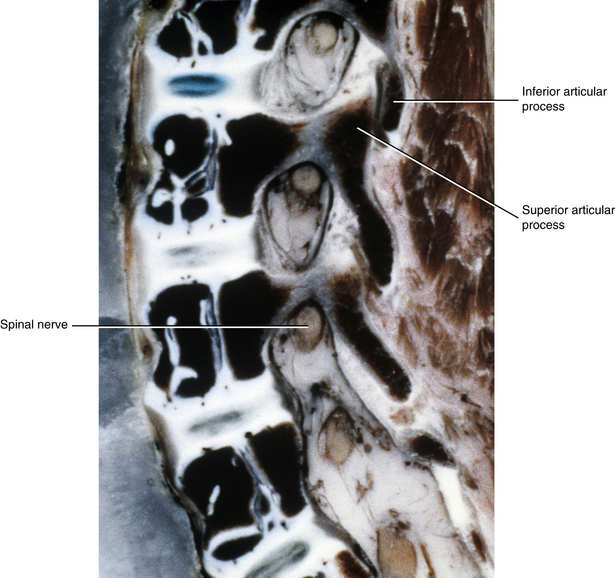 FIG. 13-6 Parasagittal section of the lumbar region of a 2-year-old child. The intervertebral foramina remain capacious (although the inferior aspect is slightly narrowed), and the articular processes remain relatively underdeveloped.

The pedicles reach approximately 75% of their adult dimensions by 5 years of age (Kanna, Shetty, & Rajasekaran, 2011). The neurocentral synchondrosis persists as a plate of growth cartilage until it completes its fusion and is completely replaced with bone at 3 to 6 years of age. This cartilage plate, and later bony plate, which is located within the posterolateral aspect of the fully developed vertebral body, extends from the superior to inferior anular apophyses. The bony plate persists throughout life (Maat, Matricali, & van Persijn van Meerten, 1996). These plates are thought to be the reason that burst fractures of the vertebral body usually do not enter the posterolateral aspect of the anatomic vertebral body, and why during such fractures a central segment of the vertebral body frequently protrudes directly posteriorly, between the “wedge shape” formed by the left and right bony plates found at the neurocentral junction (Maat, Matricali, & van Persijn van Meerten, 1996).

The primary and secondary curves are fully developed at 10 years of age. Although the cervical lordosis may be prominent in early childhood, it diminishes after the age of 5 and is absent in 14% of the late childhood and adolescent population until approximately 16 years of age. This is partially because the cervical vertebral bodies can be wedge-shaped (shorter anteriorly) during this period of time. The anterior wedging of the vertebral bodies reduces the cervical lordosis and also can be mistaken for a compression fracture (Fesmire & Luten, 1989). However, the fact that the wedged vertebrae occur at multiple levels precludes fracture.

Ligamentous laxity typically exists in the cervical spines of children, especially those younger than 8 years of age. Such laxity can create a pseudosubluxation (i.e., the appearance of dislocation) during forward flexion (Kasai et al., 1996) as seen on lateral x-rays. This phenomenon is found in 46% of children 1 to 8 years old. The pseudosubluxation usually is most marked between the second and third cervical vertebrae (Fesmire & Luten, 1989).

The vertebral bodies (VBs) of the spines of 10-year-old children are almost 100% ossified and begin to look like “little adult” vertebral bodies. The growth in vertical height of the VBs is similar to growth of the long bones with primary and secondary growth spurts. Growth in boys terminates approximately 2 years later than that in girls (Kasai et al., 1996). The IVDs have more adultlike proportions as well, with further narrowing of the IVDs from superior to inferior and the nucleus pulposus more centrally located (Fig. 13-7

Tags: and ANS, Clinical Anatomy of the Spine, Spinal Cord
Jun 11, 2016 | Posted by admin in ANATOMY | Comments Off on Unique Anatomic Features of the Pediatric Spine
Premium Wordpress Themes by UFO Themes
WordPress theme by UFO themes
%d bloggers like this: