The kidneys are traditionally known as organs that excrete waste. Although they do indeed excrete waste, they also perform a spectrum of other functions essential for health such as assuring bone integrity and helping to maintain blood pressure. As they carry out these functions the kidneys work cooperatively and interactively with other organ systems, particularly the cardiovascular system. This chapter provides a brief account of renal functions and an overview of how the kidneys perform them, and a description of essential renal anatomy. Ensuing chapters delve into specific renal mechanisms and their interactions with other organ systems.

Our bodies continuously form end products of metabolic processes. In most cases, those end products are of no use to the body and are harmful at high concentrations. Therefore, they must be excreted at the same rate as they are produced. Some of these products include urea (from protein), uric acid (from nucleic acids), creatinine (from muscle creatine), urobilin (an end product of hemoglobin breakdown that gives urine much of its color), and the metabolites of various hormones. In addition, foreign substances, including many common drugs, are excreted by the kidneys. In many cases the kidneys work in partnership with the liver. The liver metabolizes many organic molecules into water-soluble forms that are more easily handled by the kidneys.

Water, salt, and other electrolytes enter our bodies at highly variable rates, all of which perturb the amount and concentration of those substances in the body. The kidneys vary their excretion of electrolytes and water to preserve appropriate levels in the body. In doing so they maintain balance, that is, match output to input so as to keep a constant amount in the body. As an example, consider water balance. Our input of water is sporadic and only rarely driven in response to body needs. We drink water when thirsty, but we also drink water because it is a component of beverages that we consume for reasons other than hydration. In addition, solid food often contains large amounts of water. The kidneys respond to increases in water content by increasing the output of water in the urine, thereby restoring body water to normal levels. The same principles apply to an array of electrolytes and other substances that have variable inputs.

Besides excreting excess amounts of various substances, the kidneys respond to deficits. Although the kidneys cannot generate lost water or electrolytes, they can reduce output to a minimum, thus preserving body stores. One of the feats of the kidneys is their ability to regulate each of these substances independently. Within limits we can be on a high-sodium, low-potassium diet or low-sodium, high-potassium diet, and the kidneys adjust excretion of each of these substances appropriately. The reader should also be aware that being in balance for a substance does not by itself imply a normal state or good health. A person may have an excess or deficit of a substance, yet still be in balance so long as output matches input. This is often the case in chronic disorders of renal function or metabolism.

The kidneys work in partnership with cardiovascular system, each one performing a service for the other. By far the most important task of the kidneys in this regard is to maintain extracellular fluid volume, of which blood plasma is a significant component. This ensures that the vascular space is filled with sufficient volume so that blood can circulate normally. Maintenance of extracellular fluid volume is a result of water and salt balance described above.

Another major aspect of water and electrolyte balance is the regulation of plasma osmolality, that is, the summed concentration of dissolved solutes. Osmolality is altered whenever the inputs and outputs of water and dissolved solutes change disproportionately, as when drinking pure water or eating a salty meal. Not only must the kidneys excrete water and solutes to match inputs, they must do so at rates that keep the ratio of solutes and water at a nearly constant value.

Red blood cell production by the bone marrow is stimulated by the peptide hormone erythropoietin. During embryological development erythropoietin is produced by the liver, but in the adult its major source is the kidneys. The renal cells that secrete it are a particular group of interstitial cells in the cortical interstitium near the border between the renal cortex and medulla (see later). The stimulus for its secretion is a reduction in the partial pressure of oxygen in the local environment of the secreting cells. Although renal blood flow is large, renal metabolism is also large and local oxygenation drops in cases of anemia, which can be caused by blood loss, arterial hypoxia, or inadequate renal blood flow. These conditions all stimulate secretion of erythropoietin. However in chronic renal failure, renal metabolism falls, resulting in lower oxygen consumption and therefore higher local tissue oxygenation. This “fools” the erythropoietin-secreting cells into diminished erythropoietin secretion. The ensuing decrease in bone marrow activity is one important causal factor of anemia associated with chronic renal disease.

Besides their major role in ensuring adequate volume for the cardiovascular system, the kidneys also participate in the production of vasoactive substances (via the renin-angiotensin-aldosterone system described later) that exert major control over vascular smooth muscle. In turn, this influences peripheral vascular resistance and therefore systemic arterial blood pressure. Pathology in this aspect of renal function leads to hypertension.

Acids and bases enter the body fluids via ingestion and from metabolic processes. The body has to excrete acids and bases to maintain balance and it also has to regulate the concentration of free hydrogen ions (pH) within a limited range. The kidneys accomplish both tasks by a combination of elimination and synthesis. These interrelated tasks are among the most complicated aspects of renal function and will be explored thoroughly in Chapter 9.

When we think of vitamin D, we often think of sunlight or additives to milk. In vivo vitamin D synthesis involves a series of biochemical transformations, the last of which occurs in the kidneys. The active form of vitamin D (1,25-dihydroxyvitamin D), called calcitriol, is actually made in the kidneys, and its rate of synthesis is regulated by hormones that control calcium and phosphate balance and bone integrity, which will be discussed in detail in Chapter 10.

Our central nervous system is an obligate user of blood glucose regardless of whether we have just eaten sugary doughnuts or gone without food for a week. Whenever the intake of carbohydrate is stopped for much more than half a day, our body begins to synthesize new glucose (the process of gluconeogenesis) from noncarbohydrate sources (amino acids from protein and glycerol from triglycerides). Most gluconeogenesis occurs in the liver, but a substantial fraction occurs in the kidneys, particularly during a prolonged fast.

Most of what the kidneys actually do is conceptually speaking fairly straightforward. Of the considerable volume of plasma entering the kidneys each minute from the renal arteries, they transfer (by filtration) about one fifth of it, minus the larger plasma proteins, into the renal tubules. They then selectively reabsorb varying fractions of the filtered substances back into the blood, leaving the unreabsorbed portions to be excreted. In some cases additional amounts are added to the excreted content by secretion or synthesis. There is a division of labor between different regions of the tubules for carrying out these tasks that depends on the type of cell expressed in a given region. In essence, the renal tubules operate like assembly lines; they accept the fluid coming into them, perform some segment-specific modification of the fluid, and send it on to the next segment. The final product (urine) contains amounts of each substance that maintain balance for each of them.

Anatomy of the Kidneys and Urinary System

The kidneys are bean-shaped organs about the size of a fist. They are located just under the rib cage behind the peritoneal cavity close to the posterior abdominal wall, one on each side of the vertebral column (Figure 1–1). The rounded, outer convex surface of each kidney faces the side of the body, and the indented surface, called the hilum, faces the spine. Each hilum is penetrated by blood vessels, nerves, and a ureter. The ureters bend down and travel a considerable distance to the bladder. Each ureter within a kidney is formed from several funnel-like structures called major calyces, which are themselves formed from minor calyces. The minor calyces fit over underlying cone-shaped renal tissue called pyramids. The tip of each pyramid is called a papilla and projects into a minor calyx. The calyces act as collecting cups for the urine formed by the renal tissue in the pyramids. The pyramids are arranged radially around the hilum, with the papillae pointing toward the hilum and the broad bases of the pyramids facing the convex surface of the kidney. The pyramids constitute the medulla of the kidney. Overlying the medullary tissue is a cortex, and covering the cortical tissue on the very external surface of the kidney is a thin connective tissue capsule (Figure 1–2). 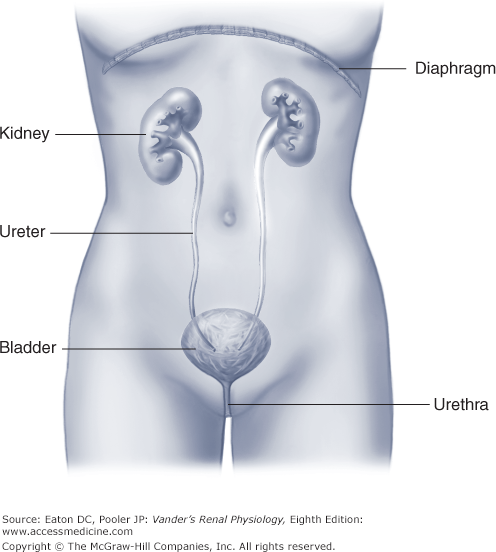 Urinary system in a female, indicating the location of the kidneys below the diaphragm and well above the bladder, which is connected to the kidneys via the ureters. (Reproduced with permission from Widmaier EP, Raff H, Strang KT. Vander’s Human Physiology. 11th ed. McGraw-Hill; 2008.) 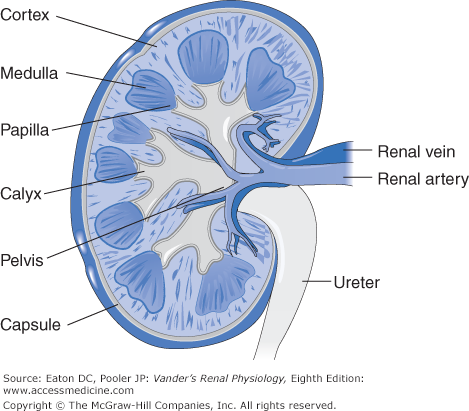 The working tissue mass of both the cortex and medulla is constructed almost entirely of tubules (nephrons and collecting tubules) and blood vessels (capillaries and capillary-like vessels). Between the tubules and blood vessels is the interstitium, which comprises less than 10% of the renal volume. It contains a small amount of interstitial fluid and scattered interstitial cells (fibroblasts and others) that synthesize an extracellular matrix of collagen, proteoglycans, and glycoproteins. And as mentioned, some of these cells secrete erythropoietin. The kidneys also have a lymphatic drainage system, the function of which is to remove soluble proteins from the interstitium that are too large to penetrate the endothelium of tissue capillaries.

The cortex and medulla differ from each other both structurally and functionally. In the cortex the tubules and blood vessels are intertwined randomly, something like a plateful of spaghetti, whereas in the medulla they are organized in parallel arrays like bundles of pencils. In both cases tubules and blood vessels are very close to each other (notice the tight packing of medullary elements shown in Figure 1–3). In addition, the cortex, but not the medulla, contains scattered spherical structures called renal corpuscles. The arrangements of tubules, blood vessels, and renal corpuscles are crucial for renal function, as will be developed later.