Regulation of Calcium, Magnesium, and Phosphate

Calcium, magnesium, and phosphorus (in the form of phosphate) are major elemental constituents of the body, the majority of all of them being components of bone. Most of the nonbone fractions are compartmentalized in organelles within cells or complexed with cytosolic proteins, and only small fractions of any of these substances are free in the ECF. However plasma levels of these ions, even though representing small percentages of total-body amounts, are crucial for body function. Deviations lead to serious, even life-threatening pathologies. Calcium and phosphate are usually discussed together because both their physiological roles and mechanisms of regulation are intertwined. All 3 substances are regulated by cooperative interactions between the kidneys, the gastrointestinal (GI) tract, and the bone.

The Chemistry of Calcium, Magnesium, and Phosphate

The physiology and regulation of calcium, magnesium, and phosphate are critically dependent on their chemical properties. Calcium and magnesium are both divalent alkali metal cations that play similar roles in some contexts and different roles in others. Their free (noncomplexed) concentrations in the ECF are roughly the same (∼1 mM), low enough so that they are not significant components of plasma osmolality. However, being divalent, they are major contributors to the nonspecific layer of cations that are attracted to negative charges on plasma membranes and large plasma proteins. Alterations in plasma levels of either one of these species have major effects on the behavior of excitable cells because they alter the electric field sensed by voltage-gated channels. In contrast, their intracellular levels are vastly different from each other and these ions perform very different functions. The cytosolic concentration of magnesium (ie, the free dissolved component) is about 0.5 mM, only slightly lower than in the ECF, whereas the free intracellular calcium concentration is less than 1000th of magnesium. This difference and their different functional roles within cells are due to nuances of their chemistry.

As with all inorganic ions, calcium and magnesium are surrounded by hydration shells of water, and when interacting chemically with other ions or organic molecules, they must shed some or all of the water. Calcium is a larger ion and holds its water loosely, whereas the smaller ion magnesium holds water tightly. Thus magnesium, with its more strongly held water, is actually a larger volume object and is excluded from restricted sites in proteins accessible to calcium. A number of intracellular proteins possess binding sites for calcium and serve as calcium detectors. This allows very small changes in free intracellular calcium to be effective modulators of protein function in the face of a large background concentration of magnesium. Free calcium rises in brief bursts as components of intracellular signaling cascades, perhaps like a small flashlight intermittently illuminating parts of a dark room, whereas magnesium is like a floodlight of constant brightness.

Phosphate is the substance we previously encountered in Chapter 9 in association with titratable acidity. In the plasma it exists primarily as a mixture of monovalent (H2PO4−) and divalent phosphate (HPO42−), with a summed concentration of about 1 mM. A significant property of phosphate is its tendency to combine with calcium in various stoichiometric ratios and form insoluble complexes. In bone this tendency to precipitate is crucial for the formation and maintenance of bone structure, but when occurring elsewhere in the body it leads to soft tissue calcification. This chemical characteristic is a major reason why plasma phosphate levels must be controlled. Within the renal tubules calcium may combine with phosphate or oxalate and form renal calculi (kidney stones) that can grow large enough to block the ureter.

The Physiology of Calcium

Calcium plays several roles in the body. First, it is a major constituent of bone, which contains 99% of total-body calcium. Second, it is used in cells as a second messenger, allowing for rapid transmission of signals from surface membrane channels or receptors to various cellular actions. Third, its presence in the ECF stabilizes the electrical sensitivity of voltage-gated membrane channels. Normal total plasma calcium is about 10 mg/dL (2.5 mM), of which about 1 mM is in the free ionized form. Another 1 mM of the total is reversibly bound to plasma proteins such as albumin, and the rest is complexed to anions with relatively low molecular weights, such as citrate and phosphate.

All body cells regulate free cytosolic calcium concentrations to very low levels in order to prevent formation of calcium complexes with the many forms of phosphate within cells, and to prevent inappropriate activation of signaling pathways. They do this with a variety of active transport systems (ATPases and antiporters) that remove calcium from the cytosol, either to the external medium or to intracellular organelles.

Calcium in the ECF is the source for calcium entering cells through calcium channels and is the calcium that triggers rapid exocytosis of neurotransmitters and signals contraction in smooth and cardiac muscle cells. As indicated earlier, the diffuse layer of extracellular cations associated with negatively charged membranes affects voltage-gated channels. Low levels of calcium fool sodium channels into sensing more depolarization than actually exists, leading to spontaneous firing of motor neurons. In turn, this firing triggers inappropriate muscle contraction, called low-calcium tetany. If severe enough, it leads to respiratory arrest because of spasms in the ventilatory muscles.1

An important modulator of the effect of calcium on nerve membranes is the plasma pH. Serum albumin has many anionic sites that reversibly bind both protons and calcium. These ions compete for occupancy of the binding sites. As pH rises, protons dissociate and calcium ions take their place, thereby lowering the concentration of free calcium ions. In turn, this reduces the diffuse cationic layer associated with cell membranes. Thus, a patient with an acute alkalosis is more susceptible to tetany, whereas someone with acidosis will not manifest tetany at levels of total plasma calcium low enough to cause symptoms in normal people.

Moment-to-moment regulation of plasma calcium is achieved, not by input and output from the body, but rather by moving calcium in and out of bone. The majority of bone substance consists of hydroxyapatite, a complex of calcium, phosphate, and hydroxyl groups.2 Bone stores of calcium are an enormous buffer system that keeps plasma calcium nearly constant regardless of whole body balance. Thus, ordinary variations in ingestion and excretion of calcium have little effect on plasma levels because of this tight buffering. The long-term regulation of total calcium in bone is, of course, important for bone growth during childhood and bone integrity in adult life. Here the kidneys play an important but indirect role because (1) they excrete calcium in the urine and (2) are involved in forming the active form of vitamin D, which is a major controller of GI calcium absorption.

1Even though calcium in the extracellular medium is required to trigger the release of neurotransmitter from motor neurons (absence of calcium blocks this process completely), low calcium causes excessive muscle stimulation because hyperexcitability is manifested at calcium levels well above the extremely low levels needed to block exocytosis.

2Apatites are a class of compounds of variable structural formula that usually include calcium, phosphate, and an anion such as fluoride, chloride, or hydroxide. The apatites in bone are a mixture of these, but the dominant one is hydroxyapatite.

Most dietary calcium simply passes through the GI tract to the feces. The amount absorbed depends on many factors, particularly the quantity of calcium in the diet. Some of the calcium that is absorbed moves by a regulated active transcellular process in the duodenum. The majority is absorbed by paracellular diffusion in the lower small intestine, where intestinal content spends a far greater time than the few minutes in the much shorter duodenum, and thus has greater opportunity for passive absorption. The active transport system in the duodenum plays its most important role when dietary calcium is limited. Calcium enters duodenal cells passively through calcium-selective channels (members of the TRP family), binds reversibly to mobile cytosolic calcium binding proteins (called calbindins), and is then actively transported out the basolateral side via a Ca-ATPase and, to some extent, by a Na-Ca antiporter. Calbindins contain multiple binding sites for calcium and are free to diffuse throughout the cytosol. They act as delivery trucks for calcium, permitting large amounts of calcium to move from place to place within a cell, in this case from apical to basolateral membrane, all the while keeping the concentration of free calcium at a low level (Figure 10–1). 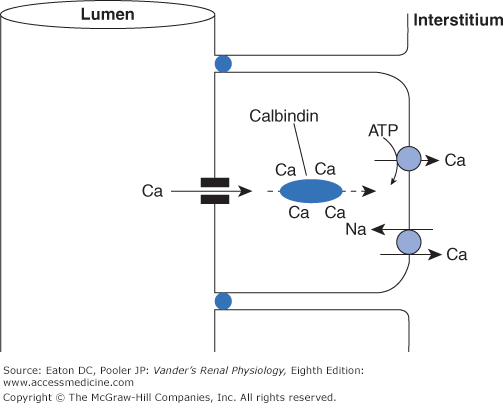 Generic method for transcellular calcium transport in the GI tract and kidney. In all body cells, the free intracellular calcium concentration must be kept to minuscule levels to prevent formation of insoluble complexes and activation of deleterious signaling pathways, even though the concentrations of calcium at the 2 external surfaces of the cells are thousands of times higher. The epithelial cells accomplish this by using diffusible calbindins. As calcium enters the cells through channels in the luminal surface, this slightly raises the calcium concentration in the microenvironment near the channels, thus promoting the binding of calcium to calbindins. At the basolateral surface, active extrusion of calcium via ATPases and sodium-calcium antiporters lowers the calcium concentration in the local microenvironment, promoting dissociation of calcium from the calbindins.

The kidneys handle calcium by filtration and reabsorption. There is no secretion. Overall reabsorption of the filtered load is normally 98%, leaving only 2% to be excreted. The free component of plasma calcium (about 40%) is freely filterable. About 65% of the filtered load is reabsorbed in the proximal tubule. Another 20% is reabsorbed in the thick ascending limb of Henle’s loop, and almost all the rest in the distal convoluted tubule and connecting tubule.

Calcium reabsorption in the proximal tubule and thick ascending limb of Henle’s loop is passive and paracellular. Whereas the tight junctions in many regions of the tubule are impermeable to cations, the tight junctions in the proximal tubule and thick ascending limb permit passive cation flux. Water reabsorption in the proximal tubule concentrates calcium and drives paracellular flux, whereas the lumen-positive potential in the thick ascending limb is the major driving force. In both cases, the driving forces are dependent directly or indirectly on active sodium reabsorption as they are for so many other substances. In the distal tubule calcium reabsorption is active and transcellular. It uses the same general mechanism as in the GI tract, that is, entrance via calcium-specific TRP channels, diffusion bound to calbindins and active exit across the basolateral membrane by a combination of Ca-ATPase and Na-Ca antiport activity (Figure 10–2). Endocrine control of renal calcium handling is exerted in the distal tubule. 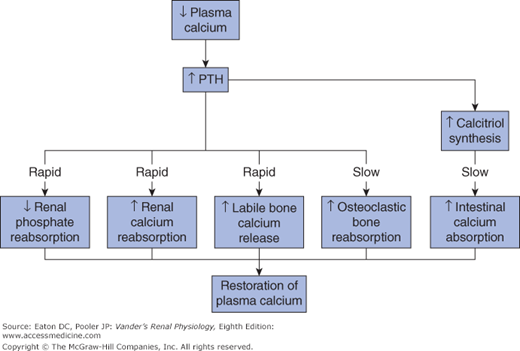