The amount of blood flowing through the kidneys is huge relative to their size. Renal blood flow (RBF) is about 1 L/min. This constitutes 20% of the resting cardiac output through tissue that constitutes less than 0.5% of the body mass! Considering that the volume of each kidney is less than 150 mL, this means that each kidney is perfused with over 3 times its total volume every minute. All of this blood is delivered to the cortex. About 10% of the cortical blood flow is then directed to the medulla.

Blood enters each kidney at the hilum via a renal artery. After several divisions into smaller arteries blood reaches arcuate arteries that course across the tops of the pyramids between the medulla and cortex. From these, cortical radial arteries project upward toward the kidney surface and give off a series of afferent arterioles (AAs), each of which leads to a glomerulus within Bowman’s capsule (Figure 2–1). These arteries and glomeruli are found only in the cortex, never in the medulla. In most organs, capillaries recombine to form the beginnings of the venous system, but the glomerular capillaries instead recombine to form another set of arterioles, the efferent arterioles (EAs). The vast majority of the EAs soon subdivide into a second set of capillaries called peritubular capillaries. These capillaries are profusely distributed throughout the cortex intermingled with the tubular segments. The peritubular capillaries then rejoin to form the veins by which blood ultimately leaves the kidney.

EAs of glomeruli situated just above the corticomedullary border (juxtamedullary glomeruli) do not branch into peritubular capillaries the way most EAs do. Instead these arterioles descend downward into the outer medulla. Once in the medulla they divide many times to form bundles of parallel vessels called vasa recta (Latin recta for “straight” and vasa for “vessels”). These bundles of vasa recta penetrate deep into the medulla (see Figure 2–1). Vasa recta on the outside of the vascular bundles “peel off” and give rise to interbundle networks of capillaries that surround Henle’s loops and the collecting ducts in the outer medulla. Only the center-most vasa recta supply capillaries in the inner medulla; thus, little blood flows into the papilla. The capillaries from the inner medulla re-form into ascending vasa recta that run in close association with the descending vasa recta within the vascular bundles. The structural and functional properties of the vasa recta are rather complex, and will be elucidated further in Chapter 6.

Flow, Resistance, and Blood Pressure in the Kidneys

Blood flow in the kidneys obeys the same hemodynamic principles as found in other organs throughout the body. The basic equation for blood flow through any organ is as follows:

The presence of 2 sets of arterioles (afferent and efferent) and 2 sets of capillaries (glomerular and peritubular) makes the vasculature of the cortex unusual. The resistances of the afferent and EAs are about equal in most circumstances and account for most of the total renal vascular resistance. Resistances in arteries preceding AAs (ie, cortical radial arteries) and in the capillaries play some role, but we concentrate on the arterioles because these resistances are variable and are the sites of regulation. A change in the resistance of an AA or EA has the same effect on blood flow because these vessels are in series. When the 2 resistances both change in the same direction (the most common state of affairs), their effects on RBF are additive. When they change in different directions—one resistance increasing and the other decreasing—the changes offset each other. 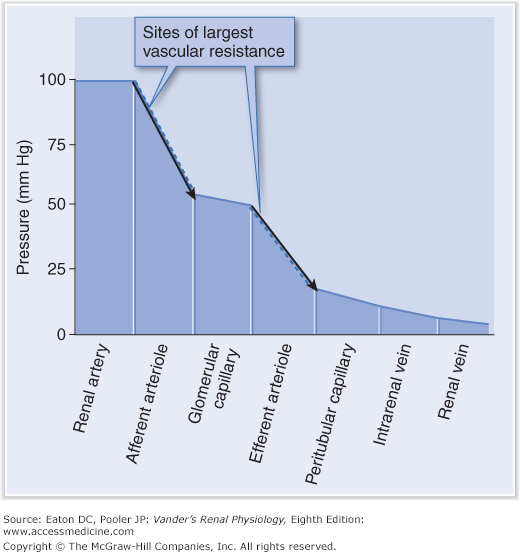 Blood pressure decreases as blood flows through the renal vascular network. The largest drops occur in the sites of largest resistance—the afferent and efferent arterioles. The location of the glomerular capillaries, between the sites of high resistance, results in their having a much higher pressure than the peritubular capillaries. (Reproduced with permission from Kibble J, Halsey CR. The Big Picture: Medical Physiology. New York: McGraw-Hill; 2009.)

The glomerular filtrate contains most inorganic ions and low-molecular-weight organic solutes in virtually the same concentrations as in the plasma. It also contains small plasma peptides and a very limited amount of albumin. Filtered fluid must pass through a 3-layered glomerular filtration barrier. The first layer, the endothelial cells of the capillaries, is perforated by many large fenestrae (“windows”), like a slice of Swiss cheese, which occupy about 10% of the endothelial surface area. They are freely permeable to everything in the blood except cells and platelets. The middle layer, the capillary basement membrane, is a gel-like acellular meshwork of glycoproteins and proteoglycans, with a structure like a kitchen sponge. The third layer consists of epithelial cells (podocytes) that surround the capillaries and rest on the capillary basement membrane. The podocytes have an unusual octopus-like structure. Small “fingers,” called pedicels (or foot processes), extend from each arm of the podocyte and are embedded in the basement membrane (see Figure 1–5D). Pedicels from a given podocyte interdigitate with the pedicels from adjacent podocytes. The pedicels are coated by a thick layer of extracellular material, which partially occludes the slits. Extremely thin processes called slit diaphragms bridge the slits between the pedicels. Slit diaphragms are widened versions of the tight junctions and adhering junctions that link all contiguous epithelial cells together and are like miniature ladders. The pedicels form the sides of the ladder, and the slit diaphragms are the rungs. Spaces between slit diaphragms constitute the path through which the filtrate, once it has passed through the endothelial cells and basement membrane, travels to enter Bowman’s space.