Regulation of Sodium and Water Excretion

The Goals of Regulation

Sodium and water excretion are regulated by an array of control systems. Seemingly every hormone, cytokine, sympathetic transmitter, and paracrine agent exerts an influence somewhere in the kidney. Given this complexity it might seem impossible to present a meaningful description of how sodium and water excretion are regulated. Certainly we cannot begin with each of the known regulated processes and predict their behavior in every situation. However, if we look at the goals of regulation—what regulation accomplishes—we can fit the various regulated processes into a framework of cooperative actions that serve the needs of the body.1

The overriding goals of regulating sodium and water excretion are to support the requirements of the cardiovascular (CV) system. This is manifested in 2 ways: (1) the kidneys maintain a sufficient ECF volume to fill the vascular space and (2) keep the osmolality of the ECF at a level consistent with cellular health. As explained in more detail in the next section, the kidneys and the CV system work cooperatively to ensure that peripheral tissue is sufficiently perfused. An adequate circulating volume is one of the essential requirements for tissue perfusion and it is the kidneys that control this volume. Osmolality is the ratio of solute content to water content. Sodium and chloride together account for 80% of the normal extracellular solute; thus the excretion of sodium and water by the kidneys regulates osmolality in the tight range that is needed for the health of tissue cells. These goals are another way of looking at the concept of balance that we described earlier. When the kidneys alter excretion of sodium and water to preserve proper amounts in the body, they are maintaining balance.

There is a separate goal of regulation that differs from those stated above. Variations in renal blood flow (RBF) and glomerular filtration rate (GFR) are major means of regulating sodium excretion. However, the kidneys cannot change blood flow and filtration to such extreme values that they compromise the metabolic health of the kidneys or interfere with the excretion of substances other than sodium, particularly organic waste. Thus, another goal is to limit the sodium-related changes in RBF and GFR that might otherwise reach deleterious levels.

1A characteristic of most physiological control systems is redundancy. In cases of renal pathology, experimental ablation studies or genetic knockout of specific components, parallel controls that may play a minor role in normal circumstances can be upregulated to compensate for defective or missing elements.

The kidneys work in partnership with the CV system. The CV system generates the pressure necessary for glomerular filtration and drives the high flow needed to maintain a stable cortical interstitial solute composition. In turn, the kidneys maintain blood volume, regulate plasma osmolality, and secrete mediators that affect both cardiac performance and vascular tone (Figure 7–1). 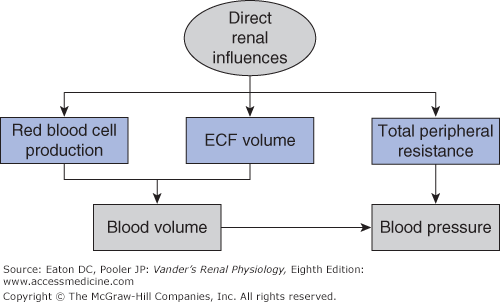 Influence of the kidneys on the CV system. The kidneys affect blood volume via their production of erythropoietin, which stimulates red blood cell production, and via their control of salt and water excretion. They also influence total peripheral resistance via the actions on angiotensin II (see text for details). The combination of blood volume and total peripheral resistance affects blood pressure.

Blood is composed primarily of red blood cells (approximately 45%) and blood plasma (approximately 55%). The kidneys are crucial for both parts—they secrete the hormone erythropoietin, which stimulates production of red blood cells, and they regulate the extracellular fluid (ECF) volume, of which blood plasma is a significant part (see Figure 6–1). Although not exact, there is an approximate proportionality between blood volume and total ECF volume. Blood volume tends to increase and decrease as ECF volume increases and decreases due to shifts of fluid between the plasma and tissue interstitial space. Thus, maintenance of blood volume is largely a matter of maintaining ECF volume.

It is obvious why water is crucial for ECF volume, but why is sodium so important? The answer stems from 2 facts. First, ECF osmolality is tightly regulated, and second, the osmotic content of the ECF depends critically on its sodium content. We can approximate ECF osmolality as follows:

By rearrangement this expression becomes:

Furthermore, since almost all of the ECF solute is accounted for by sodium and an equivalent number of anions (mostly chloride and bicarbonate), the amount of ECF solute is approximately twice the sodium content. We can write the previous expression as:

This raises a question—how do the kidneys know how much sodium there is in the ECF; in other words, how do they know whether to increase or minimize sodium excretion? There is no mechanism for the body to assay sodium content per se. Instead the detection of sodium content is indirect, based on a combination of assessing sodium concentration and vascular pressures. Glial cells in regions of the brain called the circumventricular organs (described later in this chapter) have sensory channels (Nax) that respond to and act as detectors of extracellular sodium concentration. The glial cells modulate the activity of nearby neurons involved in the control of body sodium. There are also neurons in the hypothalamus containing Nax channels that respond to the sodium concentration in the cerebrospinal fluid. Thus cells in or near the hypothalamus monitor extracellular sodium concentration.

As described above, ECF volume varies with sodium content at any given concentration. Volume affects pressures in different regions of the vasculature. Because vascular pressures are so important in regard to sodium excretion we will briefly review CV pressure regulation before describing its role in sodium excretion. 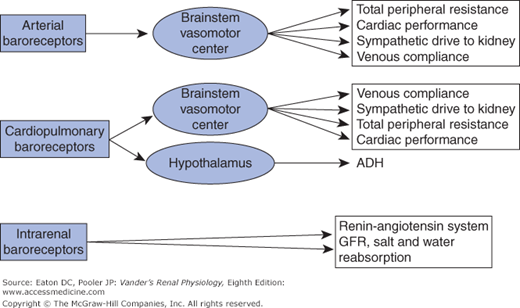 The information from neural baroreceptors is directed to a control center for vascular pressures consisting of nuclei in the medulla oblongata (lower region of the brainstem close to where the brainstem merges with the spinal cord). Collectively these nuclei are called the vasomotor center. The vasomotor center stimulates vascular tone (vasoconstriction) throughout the body via the sympathetic nervous system. In the arterioles of the peripheral vasculature this sympathetic tone maintains total peripheral resistance, and in the peripheral venous system it maintains central venous pressure via its ability to lower the compliance of large veins. By altering venous constriction in different vascular beds the vasomotor center can shift blood volume between different organs. The vasomotor center also sends both sympathetic stimulatory and parasympathetic inhibitory signals to the heart.

The amount of sympathetic drive on the heart, arterioles, and large veins changes very rapidly when pressure begins to change as a result of muscle activity or simple changes in posture. The result is to stabilize arterial pressure at its set point, the mean arterial pressure, which for most people is slightly less than 100 mm Hg. The set point is not rigidly fixed, however; it varies during the day, depending on activity and levels of excitement, and decreases approximately 20% during sleep.2

The baroreceptor/sympathetic drive system described above is very effective in maintaining arterial pressure at the set point. A major complication and area of uncertainty lies in the long-term control of blood pressure. The question of “what sets the set point” cannot be answered with confidence.3 However, it is clear that malfunction in the renal handling of sodium or malfunction in renal signaling can lead to hypertension. Any consideration of the long-term control of blood pressure must include renal actions.

2As an example of this variation, some patients experience “white coat hypertension,” an elevation of blood pressure that is manifested in response to the stress of being in a doctor’s office.

3Arterial pressure is one among many physiological variables regulated around a set point, for example, body temperature, partial pressure of carbon dioxide, or plasma concentration of glucose. Although much is known about the mechanisms that keep these variables close to their set points, the question of “what sets their set points” remains unclear.

Many signals exert control over sodium excretion. Given the preceding discussion, it should be clear that most signals directly or indirectly relate to events in the CV system. The major cardiovascular-related signaling systems are the sympathetic nervous system and the renin-angiotensin-aldosterone system (RAAS).

The sympathetic nervous system is capable of an emergency “fight-or-flight” response, but its normal operation is a differential modulation of various functions within different organs. The vasculature and tubules of the kidney are innervated by postganglionic sympathetic neurons that release norepinephrine. In most regions of the kidney, norepinephrine is recognized by α-adrenergic receptors. In the renal vasculature activation of α1-adrenergic receptors causes vasoconstriction of afferent and efferent arterioles. This reduces RBF and GFR.

Quite obviously, GFR is a crucial determinant of sodium excretion. Without filtration there is no excretion. However, except in body emergencies such as hypovolemic shock, GFR is kept within rather narrow limits due to autoregulatory processes detailed later. Thus although neural control does affect GFR, this component of sympathetic control is probably less important in normal circumstances than its effect on sodium reabsorption. Neural control of the renal vasculature is exerted primarily on blood flow in the cortex, allowing preservation of medullary perfusion even when cortical blood flow is reduced.

The proximal tubule epithelial cells are innervated by α1– and α2-adrenergic receptors. Stimulation of these receptors in the proximal tubule by norepinephrine activates both components of the main transcellular sodium reabsorptive pathway, that is, the sodium–hydrogen antiporter NHE3 in the apical membrane and the Na-K-ATPase in the basolateral membrane. This pathway is activated in situations in which it is appropriate to reduce sodium excretion, for example, volume depletion or low blood pressure.

In the circulating RAAS, angiotensinogen is synthesized in the liver (Figure 7–3). Plasma angiotensinogen levels are normally high and do not limit the production of AII. Furthermore, ACE, which is expressed on the endothelial surfaces of the vascular system, particularly the pulmonary vessels, avidly converts most of the angiotensin I into AII. Therefore, the major determinant of circulating AII is the amount of renin available to form angiotensin I. As outlined in Chapter 1 and shown in Figure 7–4, renin is produced by the juxtaglomerular (jg) apparatus. The renin-secreting cells are located in the late afferent arteriole just before the glomerulus, and are referred to as juxtaglomerular granular cells (because renin can be visualized as secretory granules). The secretion of renin by the granular cells is under the control of 3 primary regulators described below. 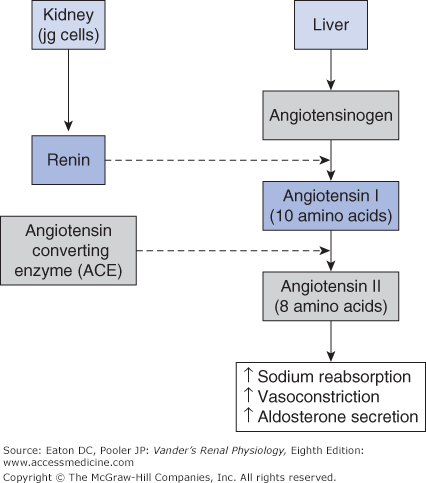 Major components of the systemic RAAS. Renin secreted by renal granular cells acts on angiotensinogen from the liver to produce angiotensin I. Most of the Angiotensin I is converted to angiotensin II (AII) by angiotensin converting enzyme (ACE). AII acts on the vascular system as a vasoconstrictor and stimulates adrenal production of aldosterone. AII acts within the kidneys to promote sodium reabsorption.. 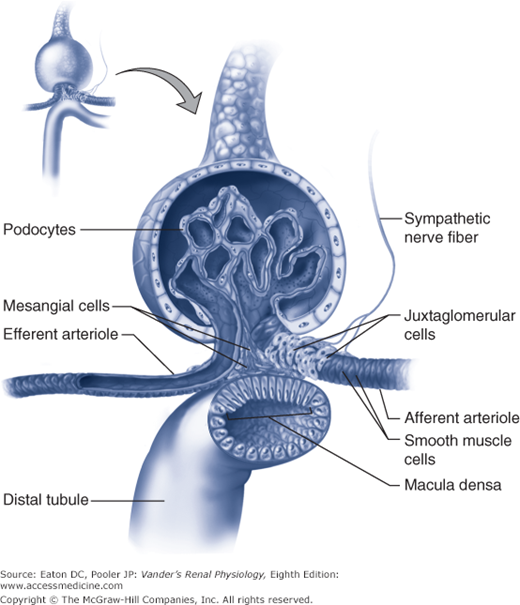