As should be clear by now, the kidneys are transport machines, moving a large array of substances between the renal tubules and the nearby network of blood vessels. The basic process of moving these substances (secretion and reabsorption) requires that solutes and water cross 2 cell layers: (1) the epithelium that makes up the walls of the tubules and (2) the endothelium that makes up the vascular walls. Substances must also traverse the thin region of interstitial fluid between them. In the cortex, where the fluxes of many filtered substances are enormous, the vascular endothelium (peritubular capillaries) is fenestrated. The fenestrae and the loose underlying basement membrane offer virtually no resistance to the passive movement of water and small solutes. This facile permeation has 2 consequences. First, the rate of transport is governed almost exclusively by events in the tubular epithelium rather than the vascular endothelium; second, the cortical interstitium, which is the medium faced by the basolateral membranes of the tubular epithelia, has an osmolality and concentration of small solutes very close to those in plasma. In contrast, both blood flow and transport events are less rapid in the medulla. Only some regions of the medullary vasculature are fenestrated, so that (1) overall transport depends on both the properties of the vascular endothelium and tubular epithelium, and (2) the medullary interstitium is most definitely not plasma-like in its composition. In the rest of this chapter we will describe the principles of epithelial transport that apply to all parts of the kidney, with particular emphasis on events in the cortex. We will then see how these principles apply to the medulla in subsequent chapters.

Crossing the tubular epithelium can occur either through the cells or around the cells. The paracellular route is when the substance goes around the cells, that is, through the matrix of the tight junctions that link each epithelial cell to its neighbor. In most cases, however, a substance takes the transcellular route, a 2-step process through the cells. For reabsorption, this is entrance across the apical membrane facing the tubular lumen, through the cell cytosol, and then exit across the basolateral membrane facing the interstitium. For secretion the process is reversed. These structures and pathways are depicted in Figures 4–1A and B. 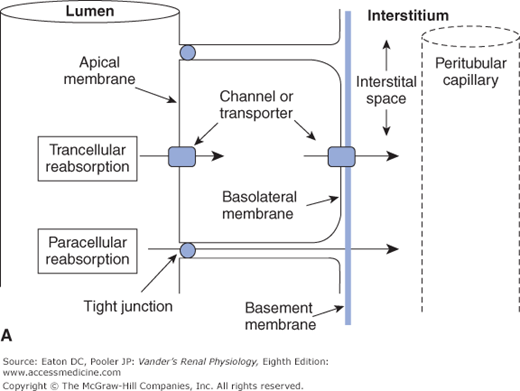 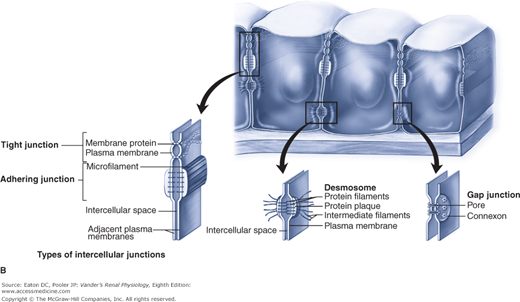 An array of mechanisms exists by which substances cross the various barriers. These are no different from transport mechanisms used elsewhere in the body. We can view these mechanisms as a physiological toolbox. Renal cells use whichever set of tools is most suitable for the task. The general classes of mechanisms for traversing the barriers are depicted in Figure 4–2. 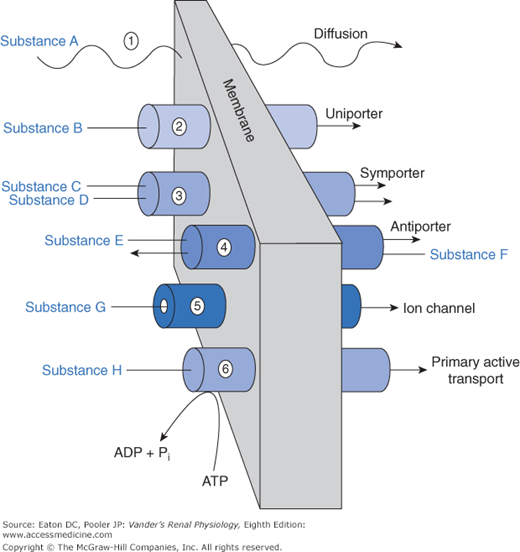 Mechanisms of transmembrane solute transport. With the exception of simple diffusion through the lipid bilayer, all transport involves channels and transporters that are regulated by signaling pathways.

The presence or absence of a given transport protein endows the tubular epithelium with selectivity, that is, the ability to choose which substance is permitted to move. Selectivity, obviously, applies to cell membranes containing different transport proteins. It also applies to paracellular flux through tight junctions. Key tight junction proteins, members of the claudin family, determine the degree to which various substances can travel paracellularly. In the proximal tubule, small ions such as sodium and potassium, water, and urea can move by the paracellular route. In the thick ascending limb, sodium and potassium, but not water or urea, can move paracellularly. Neither location permits the paracellular movement of glucose.

Diffusion is the frenzied random movement of free molecules in solution (like the Ping-Pong balls in a lottery drawing). Net diffusion occurs across a barrier (ie, more molecules moving one way than the other) if there is driving force (a concentration gradient or, for charged molecules, a potential gradient) and if the barrier is permeable. This applies to almost all substances crossing the endothelial barrier lining the peritubular capillaries. It applies to substances taking the paracellular route around the tubular epithelium and to some substances taking the transcellular route through membranes. Small neutral molecules that are lipid soluble, such as the blood gases, alcohol, and steroids, can diffuse directly through the lipid bilayer.

Most substances of biological importance cannot penetrate lipid membranes fast enough to meet cellular needs. To speed up the process their transmembrane flux is mediated by integral membrane proteins, which are divided into categories of channels and transporters (see Figure 4–2). Channels are small pores (proteins with a “hole” through the interior of the protein) that permit, depending on their structure, water or specific solutes to diffuse through them. Thus, we use the terms sodium channel and potassium channel to designate channels that permit diffusion of these molecular species. Aquaporins are channels that are permeable to water. Some species of aquaporin also permit diffusion of small neutral molecules including carbon dioxide (CO2) and nitric oxide (NO). Channels typically flicker open and closed like camera shutters, so that the permeability of a membrane containing many channels is proportional to the number of channels and the probability of their being open. Movement through channels is passive, that is, no external energy is required. The energy to drive the diffusion is inherent in the concentration gradient or, strictly speaking, the electrochemical gradient, because charged ions are driven through channels and around cells via the paracellular route not only by gradients of concentration but also by gradients of voltage. Channels represent a mechanism for rapid movement of specific substances across membranes, which would otherwise diffuse slowly or not at all.

A characteristic of channels critical for renal function is the regulation of their permeability by a number of environmental factors and signaling cascades (Figure 4–3). First, many channel types can be gated, meaning that the probability that the channel is open can be increased or decreased. The topic of channel gating is a whole story by itself, but several ways of gating channels include reversible binding of small molecules that are components of signaling cascades (ligand-gated channels), changes in membrane potential (voltage-gated channels), and mechanical distortion (stretch-gated channels). Second, many channel types have phosphorylation sites such that phosphorylation either locks the channel shut or allows it to be gated by one the mechanisms above. Third, some channel species can be moved back and forth between the surface membrane and intracellular vesicles, thereby regulating the number of the existing channels actually functioning as permeability pathways. Finally, and on a slower time scale, the genomic expression of channels is regulated so that the total number of channels, whether in the membrane or sequestered in vesicles, is altered up or down. Channel and transporter proteins are not permanent fixtures in the membrane. Their lifetimes in the membrane are generally in the range of a few hours. All of these regulatory processes are controlled by intricate signaling cascades that are the subject of current research. 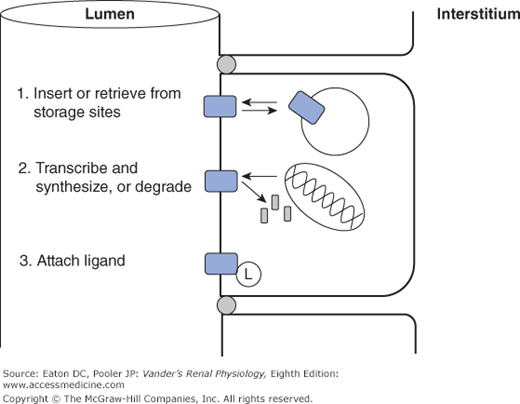 Our genome codes for a large array of proteins that function as transporters, all with names and acronyms that suffuse the physiological literature. Transporters, like channels, permit the transmembrane flux of a solute that is otherwise impermeable in the lipid bilayer. Channels can move large amounts of materials across membranes in a short period of time, but most transporters have a lower rate of transport because the transported solutes bind much more strongly to the transport protein. Furthermore, the protein must undergo a more elaborate cycle of conformational change to move the solute from one side of the membrane to the other. However, overall flux rate depends not only on the kinetics of individual transporters, but also on the density of transporters in the membrane. Total flux via transporters can be very high if the transporter density is high. As is the case for channels, the amount of substance moved via transporters is highly regulated. The regulation includes changes in phosphorylation of the transporter (thereby turning its activity on or off), sequestration into vesicles, and of course, changes in genomic expression. As described next, we group transporters into categories according to basic functional properties.

Uniporters permit movement of a single solute species through the membrane. The basic difference between a channel and a uniporter is that a channel is a tiny hole, whereas a uniporter requires that the solute bind to a site that is alternately available to one side and then the other side of the membrane (like entering a vestibule through an outside door and then leaving the vestibule to enter a hallway through an inside door). Movement through a uniporter is often called facilitated diffusion because, like diffusion, it is driven by concentration gradients, but the transported solute moves through the uniporter protein rather than the membrane lipid. A set of uniporters crucial for all cells includes those that facilitate the movement of glucose across cell membranes. These are members of the GLUT (glucose transporter) family of proteins that permit, in the kidney’s proximal tubule epithelial cells, glucose to move from the cytosol across the basolateral membrane into the interstitium.