Reconstruction of the Anus and Perianal Region

In addition to providing soft tissue cover, larger-volume loco-regional flaps or microvascular free flaps are required to close the wound and cover neurovascular structures and viscera. In addition, flaps will obliterate dead space and introduce well-vascularised tissue that can be particularly helpful in achieving healing in previously irradiated fields [1].
Patients are best managed in a multidisciplinary setting requiring discussion between the colorectal and plastic surgeon. Planning will also involve the expertise of other specialties, including the radiation oncologist, dietician and stoma nurse. Preoperatively patients may have had chemoradiotherapy or previous surgery, and it is therefore essential to take a careful history and examine the patient in order to avoid any potential complications due to previous scars or radiation injury.
Preoperative planning will include location of incisions and stomas to optimise tumour clearance and reconstructive options. Prior or intraoperative radiation and brachytherapy may also have implications for wound healing [2]. Involvement of the medical oncologist is also critical to optimise timing of surgery and minimise the deleterious effects of chemotherapy on wound healing. Several studies have shown this to occur maximally at 7–10 days after administration of chemotherapy [3, 4]. Finally, expert nursing and wound care, along with rehabilitation, will facilitate patient recovery and return to normal activities. 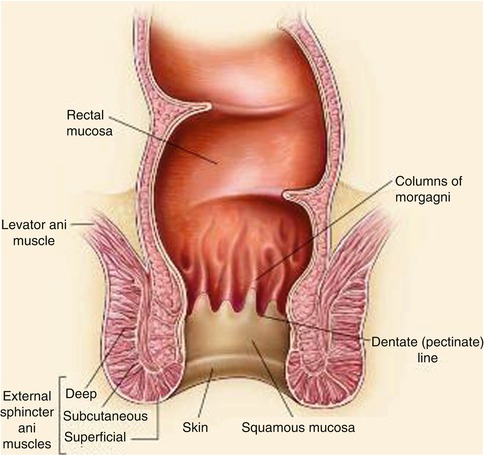 In the first instance it is essential to gain a clear understanding of the extent of the defect and its composition. This will allow decisions to be made with regard to what is likely to be required to restore both structure and function. For an anal defect, the wound needs to be assessed in terms of loss of cover, support and lining. Reconstruction of each component requires careful consideration in order to select the appropriate tissue replacement and, ideally, to replace ‘like with like’. In this way an optimal functional (and aesthetic) result can be achieved. As a general rule, perianal defects can be repaired using simple local or fasciocutaneous flaps to provide thin pliable skin to resurface the area required and contour. Flaps will also need to be robust and able to contour into the dentate line.
Surgical planning will also help to achieve tension-free closure, control dead space and minimise patient and donor-site morbidity. The latter is of course important, as a poorly healing perineal wound will prove to be very upsetting to any patient, as well as limit mobilisation and independence. As noted above, the ability to achieve uncomplicated wound healing will be particularly challenging in previously irradiated areas. However, care in planning and execution can reduce the risk of fistulae and sinus formation and minimise downtime. In addition, thought should also be given to potential ‘backup’ methods in the event of failure and the need for salvage reconstruction.

As a general rule, it was accepted that patients undergoing some form of anal margin resection may be best served with a covering stoma in order to reduce both trauma on the repair and the risk of infection. Creation of a stoma is always going to be stressful and upsetting for a patient, even if only temporary. However, for all but type 3 defects, it has also proven to be unnecessary and associated with considerable morbidity. The additional effects of a stoma include skin irritation (12 %), pain associated with poor stoma location (7 %) and partial necrosis (5 %) [6].
Our experience has, therefore, led us to try and avoid a de-functioning stoma whenever possible (Fig. 22.3). In patients with smaller resections, we will prepare the bowel on the day prior to surgery using two sachets of Citramag. Thereafter, patients are placed on a liquid/low-residue diet and encouraged to open their bowels as per normal. A normal diet is then reintroduced at 5 days thereafter.

Reconstructive methods follow a ‘reconstructive ladder’ (Fig. 22.3), beginning with primary closure and progressing to free tissue transfer at the other end of complexity. Ascent of this ladder does not always imply a superior result as outcome depends on the appropriate selection of the right technique for the wound or defect.

A skin graft consists of epidermis and some or all of the dermis. By definition, a graft is something that is removed from the body, de-vascularised and transferred to another location [7]. Grafts of any kind require vascularisation from the recipient bed onto which they are placed for survival. Therefore, grafts require a stable, well-vascularised bed in order to ‘take’.
Split-thickness skin grafts (SSG) contain epidermis and varying amounts of dermis. The donor area heals by re-epithelialisation that derives from the residual dermis. These grafts are relatively simple and safe to harvest and provide a plentiful source of soft tissue cover. However, they are thin, vulnerable to trauma and prone to contraction.
Full-thickness skin grafts (FSG) contain epidermis and the entire dermis, so only limited quantities are available if the donor sites are to be closed primarily. They are usually harvested from the groin or abdominal area. Compared to SSG they provide a better texture match and are less susceptible to contraction. However, they are less plentiful and heal more slowly than SSG. They are also more likely to fail due to their thickness.
Skin grafts have a limited role in resurfacing the perianal area as they are challenging to stabilise and vulnerable to infection and movement. In addition they tend not to ‘take’ upon a previously irradiated wound bed and will not survive on bare bone or a sloughy, infected wound. Furthermore, once split skin grafts have become established, contraction can retract and distort the local anatomy to produce functional, aesthetic and psychological sequelae [8].

Flap-based techniques provide the mainstay of perianal reconstruction and are used to repair the majority of defects in this area. Flaps are intrinsically different to grafts due to the fact that these tissue composites retain their blood supply. A flap is defined as a unit of tissue of variable composition which, when transferred from a donor to a recipient site, brings its own blood supply and intrinsic circulation [9]. Flaps can be further classified in a number of ways, but the three most significant characteristics are blood supply, movement and composition.
Flaps are perfused by either a random or axial vascular pattern (Fig. 22.4). Random pattern flaps have no discernible dominant blood supply and are usually fed by a dermal-subdermal plexus. Axial pattern flaps are perfused by an identifiable, single arteriovenous system that proceeds along the longitudinal axis of the flap. As a consequence, a larger and more reliable flap can be raised when there are identifiable blood vessels within the tissues.

Flap type and blood supply. (a) Random pattern skin flap. (b) Axial pattern skin flaps
Flaps can also be classified by their positional relationship to the defect, i.e. as local, distant or free flaps. Local flaps utilise tissues adjacent to the defect that may be advanced along the axis of the flap (e.g. V-Y). Alternatively they may be rotated, transposed or interpolated (i.e. passed over or under an intervening tissue bridge to reach the defect). Local flaps are perfused by a random pattern blood supply and tend to be used for smaller defects. As a result they bring in skin of similar quality, i.e. thickness, elasticity and, where appropriate, colour.
The perianal region is supported by a rich supply of loco-regional plexuses that allow design and harvest of multiple different local flaps. Some of these can be thin and pliable, consisting of skin and fascia alone, such as the ‘lotus petal’ and ‘Singapore’ flaps. More substantial local perforator flaps, including the inferior gluteal perforator flap (I-GAP), provide greater volume and area of skin cover and soft tissue to fill dead space. Distant flaps, as their name implies, are raised from sites away from the resection and may be transferred either by use of a pedicle (i.e. the rectus abdominis flap) or as free tissue transfers by disconnection and re-vascularisation using microsurgical techniques. Flap composition is not limited to skin or subcutaneous tissues alone but may comprise any tissue or combination of tissues, to include skin, fat, muscle, fascia, bone and tendon.

The extensive vascular supply of the perineal, gluteal, infragluteal and upper thigh regions allows for many regional fasciocutaneous flaps to be raised. Most of these flaps may be applied as either V-Y flaps, pedicled transposition flaps, subcutaneously pedicled flaps or true island flaps. Because the vascular systems of the perineal and gluteal regions anastomose with each other, these flaps may be raised as extended flaps or as reversed flaps depending on retrograde blood flow. 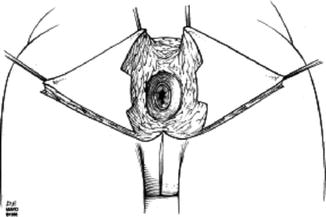 V-Y flap
Only gold members can continue reading. Log In or Register to continue

Tags: Anus Surgical Treatment and Pathology
Feb 26, 2017 | Posted by admin in PATHOLOGY & LABORATORY MEDICINE | Comments Off on Reconstruction of the Anus and Perianal Region
Premium Wordpress Themes by UFO Themes
WordPress theme by UFO themes
%d bloggers like this: