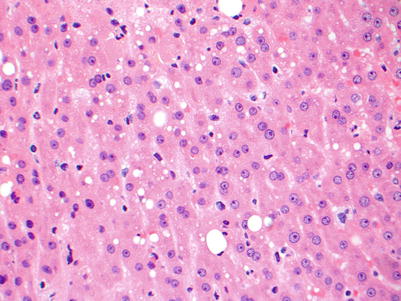 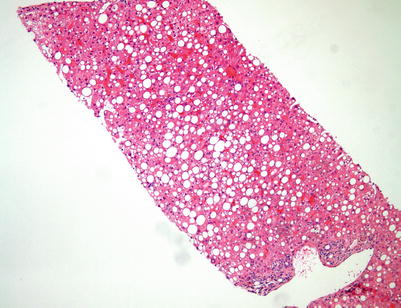 Acute cellular rejection (ACR) is the most common type of rejection and the most common complication in the early post-transplant period. The diagnosis is based on three main histopathologic features: (1) mixed but predominantly mononuclear portal inflammation containing activated lymphocytes, neutrophils, and eosinophils; (2) subendothelial inflammation of portal and/or central veins (i.e., endotheliitis); and (3) bile duct inflammation and damage (Figs. 5.4, 5.5, and 5.6). The minimum diagnostic criteria for ACR are generally accepted as the presence of at least two of these features [4]. However, because these findings may vary considerably in different areas of the graft, it is recommended that a minimum of five portal tracts and at least two sections at different levels be examined when evaluating allograft biopsies [5]. 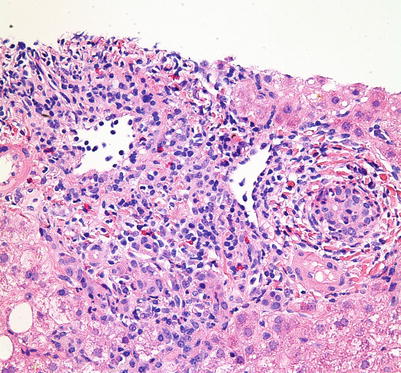 Acute cellular rejection. The portal inflammatory infiltrate is mixed and consists predominantly of lymphocytes, including large activated immunoblasts with large nuclei, prominent nucleoli, and abundant eosinophilic cytoplasm. Other inflammatory cells include eosinophils, plasma cells, macrophages, and occasional neutrophils. This portal infiltrate may range from mild to severe and can involve a few to all sampled portal tracts 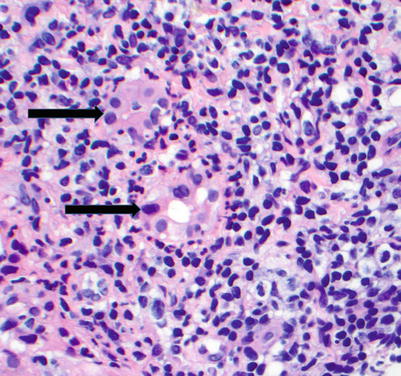 Acute cellular rejection. Bile duct injury (arrows) is shown as lymphocytic infiltration of the duct epithelium accompanied by epithelial cell injury with nuclear enlargement, overlapping nuclei, loss of nuclear polarity, cytoplasmic vacuolization, and luminal disruption
Once the diagnosis of acute rejection has been established based on the above criteria, the Banff schema (Table 5.1) is applied to grade the severity of acute rejection [6]. The schema assesses the severity of inflammation, combined with morphologic evidence of rejection-related ischemia, which is the final mechanism of allograft failure in ACR. A descriptive grading of rejection is rendered based on an overall evaluation of the parameters listed in Table 5.1. In general, mild and moderate acute rejections are distinguished based on the extent of the portal inflammation, whereas the presence of perivenular inflammation and associated hepatocellular necrosis is used to distinguish severe acute rejection from the lower grades (Fig. 5.7). In most mild cases of ACR, the inflammatory infiltrate is limited to the portal tracts. The presence of prominent interface hepatitis indicates either a more severe form of ACR, a late form of ACR (see later description), or another concomitant cause of hepatitis. If more than one inflammatory condition is affecting the allograft (e.g., acute rejection and viral hepatitis), it is extremely difficult if not impossible to determine the relative contribution of each injury to the severity of the changes. 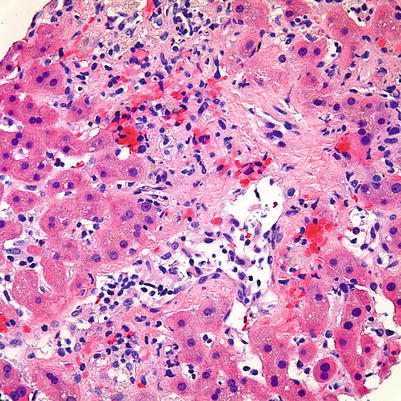 This form of rejection refers to a type of cellular rejection that occurs several months after transplantation and may show different histologic features as compared with typical ACR described earlier. Alternative names include centrizonal/parenchymal rejection, hepatitic variant of rejection, or atypical rejection. It is characterized by a hepatitic pattern of liver injury and can mimic hepatitis closely [7, 8]. Perivenular inflammation (central perivenulitis) is commonly seen, which may or may not be associated with centrilobular hepatocyte injury and necrosis (Fig. 5.8). Late acute rejection is considered a diagnosis of exclusion, and complete serologic studies (including rare forms of viral hepatitis such as hepatitis E) must be performed to rule out other etiologies of hepatitis. Of note, hepatitis E is an uncommon but increasingly recognized cause of acute and chronic hepatitis in the developed countries and should be considered in any post–liver transplant patient with a hepatitic pattern of injury. In general however, if central perivenulitis is present in less than 50 % of the lobules, the diagnosis of late acute rejection is favored [9]. 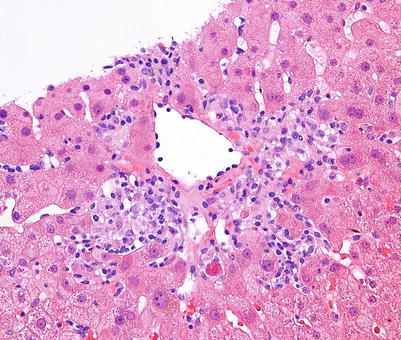 PCH is an immune-mediated post-transplant histologic pattern of injury. It is characterized by the presence of plasma cell–rich portal and lobular inflammatory infiltrates, including central perivenulitis, which closely resembles autoimmune hepatitis in the native liver (Fig. 5.9) [10]. While the pathophysiology is somewhat unclear, PCH is generally considered a form of rejection and is a negative prognostic factor for graft and patient outcomes. Patients with this pattern of injury are more likely to be resistant to increased immunosuppression and have an increased risk of fibrosis and graft loss [11–13].

(a, b) Plasma cell hepatitis. Numerous plasma cells are seen among the portal and periportal inflammatory infiltrate (a) as well as in pericentral areas (b) of this post-transplant liver biopsy. This pattern of injury is generally considered a form of rejection and imparts a negative prognostic factor for graft function and patient outcome

In comparison to other solid organ transplants (such as heart, lung, and kidney) in which CR may affect 30–50 % of allograft recipients, CR affects only 3–5 % of liver transplant recipients. Although late CR is considered an irreversible, progressive disease that leads to graft loss, early CR is considered potentially reversible [14]. Early CR is identified by degenerative changes of the biliary epithelium, even before duct loss. These include uneven spacing of biliary epithelial cells, loss of nuclear polarity, and increased cytoplasmic eosinophilia (Fig. 5.10). Late CR is characterized by bile duct loss involving greater than 50 % of portal tracts (Fig. 5.11). Other lobular features that may be seen in later phases of CR include clusters of pigmented foamy macrophages, canalicular cholestasis, pericentral hepatocyte atrophy, and/or ballooning and perivenular fibrosis (Figs. 5.12, 5.13, and 5.14). While foam cell obliterative arteriopathy is the characteristic feature of CR, this finding is only rarely seen in needle core biopsies (Fig. 5.15). The minimum diagnostic criteria for histopathologic diagnosis of CR are defined as follows [15]: (1) the presence of bile duct atrophy/senescence affecting most of the bile ducts, with or without bile duct loss (early CR), (2) foam cell obliterative arteriopathy (OA) with accumulation of foamy, lipid-laden histiocytes within the myointimal layer, or (3) loss of interlobular bile ducts in at least 50 % of the portal tracts (late CR). 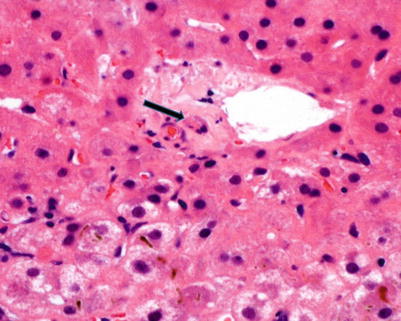 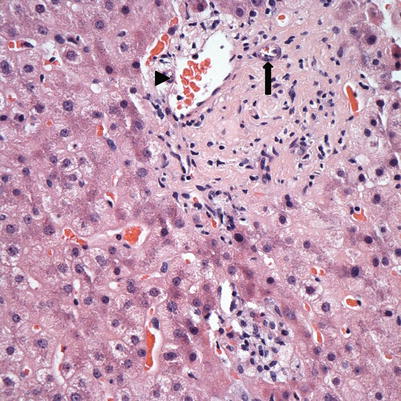 Chronic rejection. This biopsy showed loss of bile ducts in the majority of portal tracts. The portal tract here shows a branch of hepatic artery (arrow) and portal vein (arrowhead) but no interlobular bile duct. Immunostain for cytokeratin 7 or 19 may be used to help confirm the bile duct loss 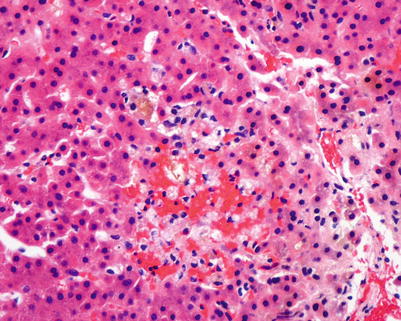 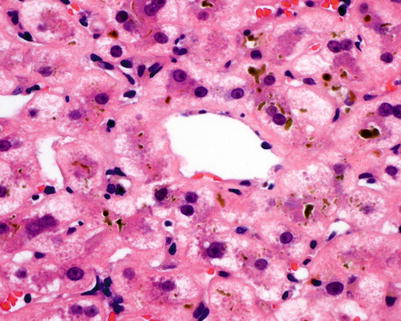 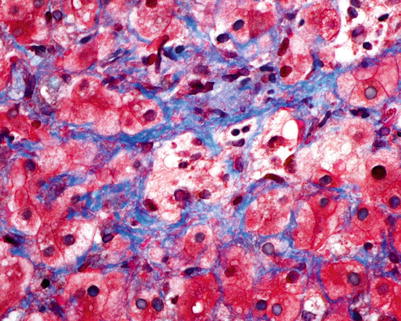 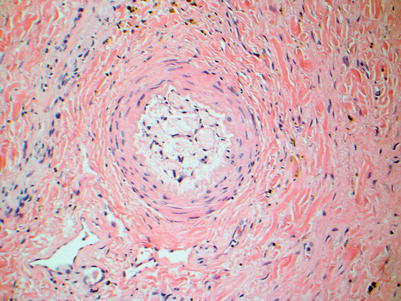 Chronic rejection. Foam cell obliterative arteriopathy is the hallmark feature of chronic rejection and is characterized by intimal thickening with accumulation of lipid-laden foamy macrophages that can cause luminal narrowing and obstruction. This lesion is rarely seen in biopsy material

AMR is becoming increasingly recognized in liver allografts. However, it remains a controversial area because its diagnostic criteria and histologic features have not been fully established. In general, AMR may be considered if other etiologies of allograft dysfunction have been excluded and if donor-specific antibodies (DSAs) are discovered in the patient’s serum. Histologic features that have been reported include portal edema and neutrophilic inflammation with ductular reaction (i.e., features similar to those of bile duct obstruction), hepatocellular necrosis (i.e., features of ischemic injury) as well as portal vein endothelial cell hypertrophy, portal eosinophilia, and eosinophilic central venulitis (Fig. 5.16). Diffuse C4d deposition in the portal vein and sinusoids, demonstrated by immunohistochemistry and/or immunofluorescence, has been described in cases with clinical suspicion of AMR in the presence of DSAs (Fig. 5.17) [16–18]. However, the C4d stain remains a nonspecific stain, and its clinical utility remains unclear because positivity has also been reported in cases of ACR, CR, recurrent hepatitis B and C, biliary obstruction, vascular thrombosis, and even normal allograft livers [19]. The Banff schema consensus guidelines for diagnosis of AMR and C4d interpretation in liver allograft are expected to be released in the near future. 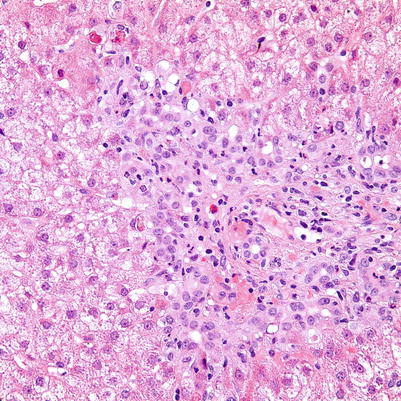 Antibody-mediated rejection. The portal tract shows expansion by ductular reaction and edema, resembling features of bile duct obstruction. In this case, biliary obstruction was ruled out by imaging studies while the patient showed persistent signs of allograft dysfunction along with positive serum DSAs, and was determined to have AMR
Only gold members can continue reading. Log In or Register to continue