The subepithelium forms the innermost layer. It is mildly hyperreflective (i.e. “bright”) and contains the muscularis submucosae ani and vascular channels. The IAS forms the innermost muscular layer and extends from the anorectal junction to approximately 1–1.5 cm below the dentate line. Its characteristic features are of a low-reflectivity (i.e. dark), very well-demarcated ring. As discussed below, the thickness of internal sphincter when measured by ultrasound varies according to age, but it is usually symmetric in the mid canal, although may appear thinner anteriorly, particularly in the upper canal in females. Significant asymmetry in the internal sphincter suggests either focal atrophy or injury (Fig. 3.2). One caveat to this rule however is in the distal canal—an asymmetric termination of the internal sphincter is relatively common in normal individuals which may give the impression of a distal defect to the inexperienced. Conventionally the internal sphincter is measured at its thickest portion at either 3 or 9 o’clock. 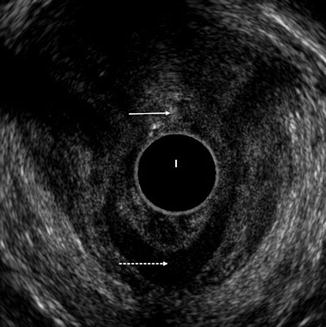 There is clear anatomical variation between men and women in anal canal anatomy [5]. The external sphincter is generally shorter in women, particularly anteriorly. Using 3D ultrasound, Williams et al. reported that on average the external sphincter was approximately 17 mm long in women compared to 30 mm in men. The external sphincter is also usually less reflective in men compared to women and therefore easier to visualise. Conversely, little gender differences have been found in the length of either the puborectalis or the IAS.
Sphincter thickness as depicted by endoanal ultrasound is not constant throughout life; notably IAS thickness increases with age. Measurements of 1–2 mm for young adults, 2–3 mm for middle-aged adults and 3–4 mm for the elderly are typical (Fig. 3.3). As the sphincter becomes thicker with age, a small increase in reflectivity may also be noted, attributable by some to a more prominent connective tissue component [7]. Conversely, the external sphincter tends to thin in older nulliparous women, whereas the subepithelium and longitudinal layer tend to remain unchanged [7]. 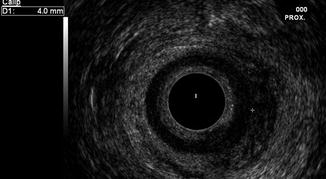