All competent MRI reports should include the following information: The radial location and classification of the primary track(s), the radial location and level of the internal opening(s) and a description of any extensions.
Active tracks are filled with pus and granulation tissue and thus appear as hyperintense on T2-weighted or STIR sequences, often surrounded by hypointense fibrous walls, which can be relatively thick, especially in patients with recurrent disease following previous surgery. The external anal sphincter is relatively hypointense, and its lateral border contrasts sharply against the fat within the ischioanal fossa, especially on T2-weighted studies. Consequently it is relatively easy to determine whether a fistula is contained by the external sphincter or has extended beyond it.
If a fistula remains contained by the external sphincter throughout its course, then it is highly likely to be intersphincteric (Fig. 18.3). In contrast, transsphincteric, suprasphincteric and extrasphincteric fistulas all show sepsis in the ischioanal space – it is the level of the internal opening and the level at which the fistula crosses the sphincter complex that differentiates between these types. A track in the ischioanal fossa is usually due to a transsphincteric fistula (Fig. 18.4) simply because it is much commoner than suprasphincteric or extrasphincteric classifications. 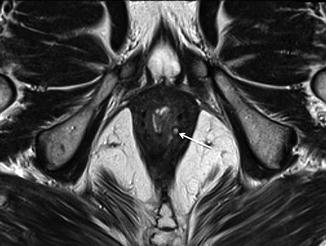 Axial T2-weighted MR images in a man with an intersphincteric fistula (arrow). Note that the fistula is contained by the external sphincter; there is no sepsis in the ischioanal fossa 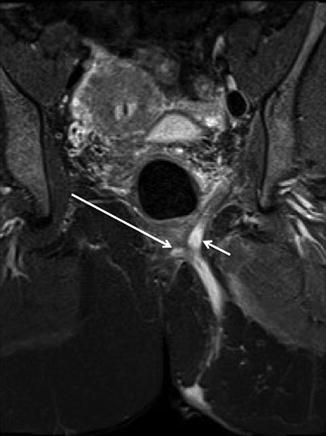 Coronal STIR MRI in a patient with a suprasphincteric fistula. The primary track is arching over the puborectalis (long arrow). There is also a small cranial extension off the apex of the track (short arrow) into the roof of the left ischioanal fossa 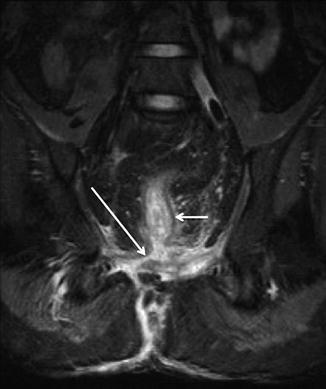 The major advantage of MRI is the ease with which it can image any extensions associated with the primary track. Like tracks, extensions are manifest as hyperintense regions on T2-weighted and STIR imaging and also enhance further if intravenous contrast is given. Again, collateral inflammation can be present to variable extent. The commonest type of extension is one that arises from the apex of a transsphincteric track and extends into the roof of the ischioanal fossa (Fig. 18.7). 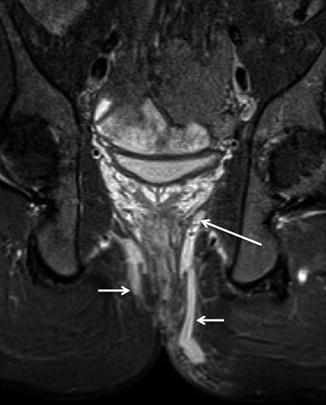